0
SHARES
2
VIEWS
Share on FacebookShare on Twitter
A KSK operator armed with an HK G36K moves to secure a rooftop after a helicopter insertion. HK G36s are the most widely used carbines of the troops. The weapons are light, fast handling, and easy to use.

Germany has a tradition of elite troops trained for special operations dating back to the World War I “stormtroopers,” who infiltrated behind enemy lines to wreak havoc. Their World War II successors, the Brandenburgers and Otto Skorzeny’s Jagdsverband, were trained for a wide array of special missions. However, during the post-war years, Germany did not really have a military special forces unit. The German Border Police’s GSG-9, formed after the 1972 Munich massacre, was rated one of the world’s best counterterrorist units, but it had limited missions. The closest thing to a special forces unit in the German Army was the Fernspaher, who were long-range recon troops. That changed, however, in 1996 with the formation of the Kommando Spezizlkrafte (KSK), which was patterned on units such as the Special Air Service and the U.S. Army Special Forces, especially Delta Force/CAG. Reportedly, some of the impetus for forming the KSK came from an experience in the Rwandan Civil War when 11 German citizens had to be rescued by Belgian and French troops since the German Army did not have personnel trained for such an operation. 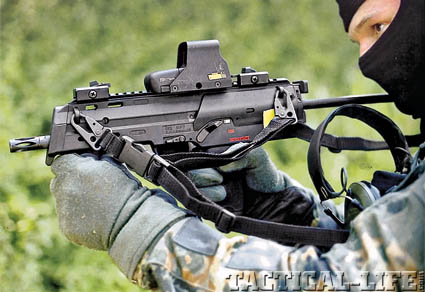 KSK units are armed to the teeth. For CQB engagements, KSK commandos have HK MP7s in their arsenal for extremely fast 4.6mm bursts.

KSK Breakdown
The KSK was activated on April 1, 1997, and has assumed a wide array of special operations missions, including counterterrorist missions outside of Germany. GSG-9 retains the counterterrorism mission within Germany and the Kampfschwimmers retain the MAT (Maritime Anti-Terrorism) mission. The KSK is organized into an HQ and Communications Company, a Support Company, a Training Platoon, a Long-Range Recon Company, and four commando companies, each with around 100 operators plus support elements.

Within each commando company are specialist platoons, much like the specialist troops in an SAS squadron. These platoons consist of a command platoon, a platoon that specializes in land insertions (much like the SAS Mobility Troop, this includes desert operations), one that specializes in intelligence gathering and airborne insertions (HALO/HAHO specialists), an amphibious platoon, a mountain and arctic platoon, and a reconnaissance and sniper/countersniper platoon, which can be attached from the Long-Range Recon Company. Note that a substantial number of KSK operators are trained as snipers. 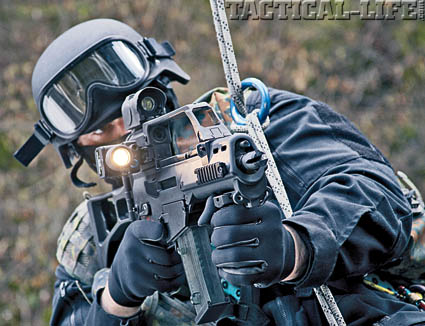 The G36C ropes into action.