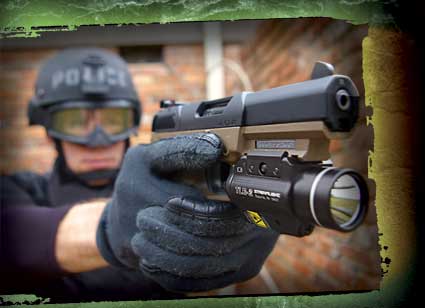 For every action there is an equal and opposite reaction. The same is true in the tactical and military communities, with every development causing an equal and opposite counter development. Take for example the role of the pistol cartridge in the military community. Not just limited to use in handguns, pistol cartridges such as 9mm and .45 ACP have also been employed in submachine guns for generations due to the excellent balance of firepower and controllability they offer. However, the introduction of body armor soon revealed the limitations of the pistol-cartridge chamberings of these firearms.

While the role of the submachine gun-sized round in military use was not dead, it did need to be adapted to a changing environment. Enter FN Herstal. Toward the end of the Cold War, NATO had begun a search for a new cartridge to replace the 9mm round for support weapons that would be capable of defeating the body armor being introduced by the Soviet Union and its satellite countries. This PDW (personal defense weapon) round was required to be capable of defeating 48 layers of Kevlar, something far beyond the capabilities of the 9mm cartridge. FN’s answer was the 5.7x28mm round.

FN’s new round filled the role determined by NATO extremely well. With low-impulse recoil significantly less than that of the 9mm, the new cartridge pushed a roughly 30-gr. projectile at around 2,300 feet per second out of a 10-inch barrel and featured a nearly flat trajectory out to 100 yards. In addition, the high-speed projectile showed an ability to meet the penetration requirements of the NATO trials, as well as a tendency to cause large wound channels and stay contained in a human-torso-sized target.

A New Paradigm
What was the effect of this new cartridge? Its intriguing capabilities resulted in a new lease on life for the submachine gun-sized round in military and tactical circles, although in a radically new form. By developing a PDW cartridge that was significantly shorter than a conventional rifle cartridge, FN had created a means to develop small and handy PDWs that could provide impressive capacity, power and range in a compact envelope.

The fruition of this was FN’s radical P90 PDW. Featuring a bull-pup design and a horizontally configured 50-round magazine, the P90 offered compact yet effective firepower in a submachine gun-sized package. However, the P90 was not the only beneficiary of the strengths of the then-new 5.7x28mm cartridge. FN also developed a companion pistol, the Five-seveN, that fired the same cartridge.

The Five-seveN pistol, and in its newest configuration as the Five-seveN , is just as radical as the P90. Featuring a polymer frame and polymer slide cover, the pistol is extremely light, weighing in at 19 ounces. In addition, the grip area of the pistol houses a flush-fitting magazine that holds an astounding 20 rounds of 5.7x28mm cartridges. Velocities of the 5.7 cartridge average 2,100 feet per second out of the pistol’s 4¾-inch barrel, producing an amazing amount of power out of a small and handily sized package.

Target Market
“We designed the Five-seveN handgun to be the most accurate production handgun on the market,” says Ken Flood, national sales manager with FNH-USA, FN Herstal’s U.S. subsidiary. He further explains that the Five-seveN offers some unique characteristics that make it extremely well suited to the LE community. “Due to the low recoil of the pistol, it makes it easier for officers to shoot well with it,” he continued.

The Right Tool
The advantages of the Five-seveN pistol for the LE community extend well beyond just its accuracy and controllability. The nature of its 5.7x28mm chambering provides capabilities well beyond that of a more conventionally chambered handgun.

With several high-profile incidents of assailants employing body armor over the past several years, the LE community has had to re-examine the types of firearms it employs. The unique capabilities of the 5.7x28mm cartridge have made it stand out—in addition to the characteristics of the pistol such as its light weight and extremely large magazine capacity.

Who’s using it? S.W.A.T. team commander Capt. Mohamed Lostan of the Passaic County Sheriff’s Dept. in NJ is a particularly enthusiastic supporter of the handgun and cart­ridge. “While our department issues .40-cal. pistols, our S.W.A.T. team is allowed to carry any handgun they want to use as long as they purchase it themselves and qualify with it, In fact, I was the first one on the team to carry the Five-seveN, although now several others do as well,” he cont­inued. Lostan definitely knows his way around firearms. In addition to his 23 years with the sheriff’s department and current position he also served in the U.S. Army in the 3rd Division Recon Unit and the 82nd Airborne Division.

So what was it about the Five-seveN pistol that drew his attention? “I first learned about the new 5.7x28mm cartridge in an article in the late 1990s about the P90 and the Five-seveN,” he told me. Lostan attempted to get his department to adopt them back then, but budgetary consid­erations blocked his eff­orts. However, the economic situation changed in 2002 and gave Lostan the chance to purchase several P90s for the department. “I was so impressed by the 5.7x28mm cartridge used in the P90 that I asked permission for S.W.A.T. team members to be able to carry Five-seveN pistols if we purchased them on our own.”

Penetrating Logic
So why did he and members of his team so enthusiastically switch to the Five-seveN? “Frankly, the performance of the round,” Lostan told me. They were looking for a handgun and cartridge that could offer enough penetration to take down assailants in a variety of situations, but not one that would over-penetrate walls and doors. They found that the 5.7x28mm cartridge ach­ieved this seem­­­­­­­ingly irreconcilable set of goals well.

“We shot it into bare gelatin and it penetrated 11 inches. We then placed a vest over some gelatin and tried it again, and it penetrated 9 inches. Fired through a piece of sheetrock and into gelatin, the bullet penetrated 8¼ inches.” They then decided to check how much it would penetrate through more than one section of wall. After constructing three walls from sheetrock and 2x4s, they placed them 12 feet apart to simulate the average room they would encounter. “We fired rounds through them, and the 5.7 started to keyhole after striking the second wall. It never went through the third,” he said. This was in direct counterpoint to their issued .40-cal. pistols that would penetrate all three walls and hit the backstop. Lostan and his team currently use SS190 31-gr. aluminum-core with a tungsten carbide penetrator tip as their duty ammo and SS195LF 27-gr. aluminum-core hollow-point ammo as their practice round. “In many of our missions we have to employ ballistic shields, which creates some handling issues regarding a firearm,” Lostan mentioned. With one arm occupied holding the shield, a handgun is just about the only option for the officer. With only one hand free to operate it, control under rapid fire and reloading can be a real issue. “With the Five-seveN pistol, the extremely low recoil makes it easier to control one-handed. In addition, the 20-round capacity of the magazine helps to negate the problem of reloading as it takes much longer to run it dry.”

In appearance, the Five-seveN is just as unique as its capabilities. The polymer frame and slide cover help to give the full-sized pistol its feather-like weight of 19 ounces. Operationally, it works as a delayed blowback semi-automatic and features a single-action trigger system, an internal hammer and a magazine-disconnect safety system. The magazine release button is reversible, and the pistol’s polymer frame features generous amounts of molded-in checkering. A uniquely designed ambidextrous rotating lever safety is located above the trigger guard, and requires a sweep down to take the pistol off of safe. Building on its expertise in making barrels for its many machine guns and rifles for the U.S. military, the Five-seveN hammer-forged 4¾-inch barrel features a hard-chromed bore for a projected service life of 20,000 rounds.

The Ties that Bind
FN Herstal has a long history of providing guns and gear to those that protect us, both in the military and LE communities. It is this level of interaction and understanding of those groups’ specific needs that has led to a product such as the Five-seveN pistol. For more information: FNH, 703-288-1292, fnhusa.com.