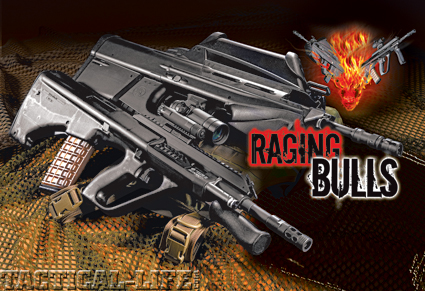 Two of the more popular bullpup designs with militaries around the globe include the FN Herstal F2000 series of rifles (top) and the Steyr AUG A3.
Comment(s)

Utilizing the compact layout of bullpup configuration is a practical and logical concept for a military rifle. By placing the receiver in the butt of the rifle behind the trigger group, a bullpup can retain the attributes of a full-length barrel and operating system while being much more compact. Combat experience in World War II demonstrated that an intermediate-size cartridge used in a compact assault rifle was practical and combined the best features of a full sized rifle and submachine gun. Most modern armies had become mechanized during the war and had also fielded parachute units. Helicopter transportation of troops soon followed and the need for a battle rifle that was as compact as possible became important.

Although the earliest experiments with bullpup assault rifle designs began in World War I, it would take several decades after World War II for the first practical bullpup battle rifles to be fielded. TW offers a look at some of the military bullpup assault rifles in use around the world today, some of which are available in semi-automatic form for civilian shooters.

The AUG A3 modular weapon system is the latest development of the AUG rifle series. The AUG A3 design is also based on modular system components, which can be configured from one variant to another quickly and easily, without tools, at unit level, in order to meet a wide range of future weapon requirements. A number of accessory rails allow the quick mounting of various illumination devices, optics and night vision devices. Interchangeable barrels in various lengths are available and can be quickly changed to meet mission requirements. The synthetic stock chassis is available in green and black colors. To accommodate both left-and right-hand shooters, the bolt can be quickly changed without tools. Fire control options include semiautomatic only and select fire, with the choice of 3-round burst or full automatic. On select-fire models the option of single shot or auto fire is selected by how much pressure the shooter applies to the trigger. The AUG A3 is manufactured in both Austria and the United States. For more information on tactical and civilian models visit Steyrarms.com.

One of the newest bullpup designs to enter military service is the VHS assault rifle. HS Produkt of Croatia, perhaps best known for producing the XD pistol marketed by Springfield Armory, designed and manufactures the VHS Assault Rifle. The designation VHS is short for Višenamjenska Hrvatska Strojnica, which roughly translates as Multipurpose Croatian Automatic Rifle. The VHS was designed for the Croatian Armed Forces in order to provide them with a modern battle rifle that uses NATO standard 5.56mm ammunition. Currently there are two variants known as the VHS-D and VHS-K. The VHS-D is the standard rifle and the VHS-K is shorter version for use as a personal defense weapon and for other specialized uses. 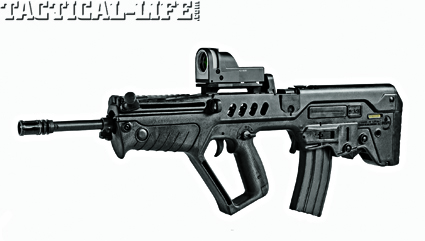 IWI Tavor 21: IWI (Israel Weapons Industries) developed the Tavor 21 rifle in collaboration with the IDF. By all accounts, based on its combat use by the IDF in the Middle East and by several others in locations including South America, India, and SE Asia, the Tavor has proven to be an outstanding combat rifle. The Tavor is currently available in four configurations. The standard rifleman version is the T.A.R. 21 or Tavor Assault Rifle 21. A shorter carbine version intended for combat leaders is designated the Commander Tavor Assault Rifle (C.T.A.R. 21). For the DM role the Sharpshooter Tavor Assault Rifle (S.T.A.R. 21) is equipped with an adjustable bipod. When a truly compact version is needed for CQB or VIP protection the Micro Tavor Assault Rifle (M.T.A.R. 21) is used. By using modular construction the Micro Tavor can quickly be converted from 5.56x45mm to 9x19mm. www.israel-weapon.com 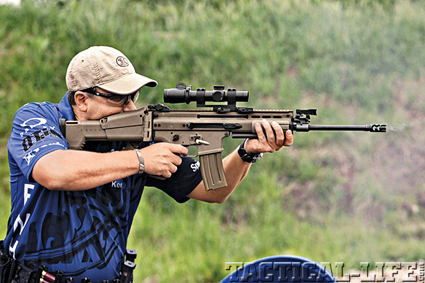