In a law enforcement context, the word “raid” is slang for any event in which a structure—usually a house, business, or motel/hotel room—is entered with force to effect an arrest or a search. It could be a search warrant execution (often looking for drugs), an arrest, a hostage rescue, an assault on a barricaded gunman, an emergency entry to insure someone’s safety, or any number of other circumstances. Raids can be carefully rehearsed in structures that have been constructed to resemble the actual raided structure, or they can be quickly arranged affairs. They can be executed by SWAT, narcotics personnel, detectives, investigators, patrol officers, or any combination of the above.

Uniformed officers are pretty much raid-ready as they are. They have the tools they’ll need already on their duty belts, and they are already wearing body armor. “Unis” might also grab a long gun and spare ammo for it, and maybe another special tool (such as a breaching ram) as they prep for the raid.

But other operators usually need a raid vest to do the job. These other operators are generally of two types: S.W.A.T. officers and plain-clothes officers. S.W.A.T. always turns out for an event dressed and prepped to assault a structure with their special tools. Their uniforms almost always include a multi-compartment vest with these extra goodies in addition to the normal equipment on their duty belt.

However, plain clothes officers typically carry less equipment on their plain-clothes belts than a duty belt supports. The usual raid prep procedure involves donning body armor (if it’s not already worn), and a vest with all of the additional equipment that will be needed for the event.

Configuring the Vest
Raid vests come with two independent variables, making for four possible variations: incorporating body armor or not, and either set up with compartments or customizable with modular compartment systems (MOLLE being the most common).

Pre-configured vests are usually set up for general purpose law enforcement work, or else geared towards a specific function. A pre-configured S.W.A.T. vest, for example, might contain pockets for rifle magazines, flash-bangs, less-lethal ammunition and other typical S.W.A.T. equipment. An EOD (explosive ordinance disposal) technician’s pre-configured vest would likewise be set-up to hold the most common EOD tools. A dedicated shotgunner’s vest would be set up with pockets containing shotshells of different sorts. A medic’s vest would be set up to carry life-saving medical supplies. A narcotics raid vest might be set up to support an extra pistol or a Taser, a knife, extra cuffs and so on. A K-9 handler’s vest would have compartments for K-9 supplies and be arranged to accommodate the handler’s off-hand being occupied with the dog.

Other common features that raid vests often incorporate are: drag straps on the rear so that an injured officer can be dragged to safety; a tacky shoulder panel so that the butt stock of a mounted long gun doesn’t slide off the nylon of which most vests are made; a compartment for hydration equipment; quick-release mechanisms so that trapped or injured officers can quickly “dump” their vests; and interior map pockets.

Most vests also feature hook-and-loop (Velcro®) sections on the front and rear for attaching panels with the word “police” or “sheriff” or the officer’s agency’s name to the vest. This is an absolutely critical feature for any law enforcement vest—many raids are multi-agency affairs, and identifying the good guys at a glance is critical to avoiding “friendly fire” tragedies. In fact, some experts suggest that all vests feature the word “police”—and only that word—in large letters. Their reasoning is that everyone understands what the word “police” means.

If officers go with a modular system, they can construct “custom-made” vests to suit their missions and equipment precisely. Modular vests usually incorporate the military’s ALICE or, more commonly, MOLLE attachment system, and the number of pockets, pouches and other gear-holding units that are available with these attachment systems is seemingly infinite.

To Armor or Not To Armor
Almost all law enforcement officers are issued soft, concealable body armor, to be worn under their clothing. The theory behind using a non-armored raid vest is that officers already have their issued body armor, and as they gear-up for a raid they can wear their issued ballistic armor with the non-armored raid vest over it.

The disadvantage of this approach, however, is that normally issued ballistic vests are meant to be worn for 8+ hours a day, day after day, and thus they are a compromise between wearability and protection. Therefore, most issued ballistic vests are Level II, and some are Level IIIA. These levels provide protection against the more common handgun rounds, but for a raid a higher level of protection might be desirable for two reasons. First, most raids have a higher danger probability than most officers’ other jobs. Second, raids are pretty much short-term events, and so the need for comfort and day-long wearability is less important than the protection level the vest offers.

For these reasons, a raid vest that incorporates a higher level of ballistic protection and/or greater area coverage is practical.

Choose the Right Vest
Blackhawk makes quite a number of both pre-configured and modular non-armored raid vests, and they have recently introduced the first of a new line of armored modular vests. The non-armored vests include those set up for: general-purpose, cross-draw pistol-carry, EOD, shotgunner, rifleman, urban assault, medics, non-lethal and chemical agents. Many of these can incorporate Blackhawk’s HydraStorm® hydration system and HawkTex™ shoulder pads for long-gun stability. The company’s modular non-armored vests come with either ALICE or MOLLE attachment systems.

Blackhawk’s armored vest consists of a Level IIIA vest with MOLLE attachment system with a host of ballistic accessories such as throat, bicep and groin protection.

First Choice Armor, another major body armor manufacturer, makes two key armored product lines for the tactical market. The company’s Duty Specific line consists of pre-configured carriers for its concealable body armor. Many officers choose to go this route because they sometimes wind up with more than one serviceable concealable vest.

Whatever the application, the appropriate raid vest is available either ready-made or customizable by the end-user. 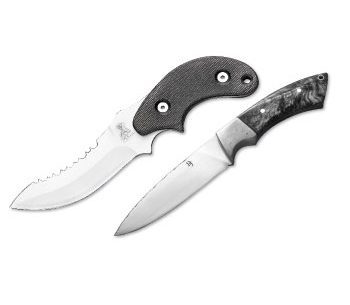 Our latest report for the art and craftsmanship of the handmade knife.