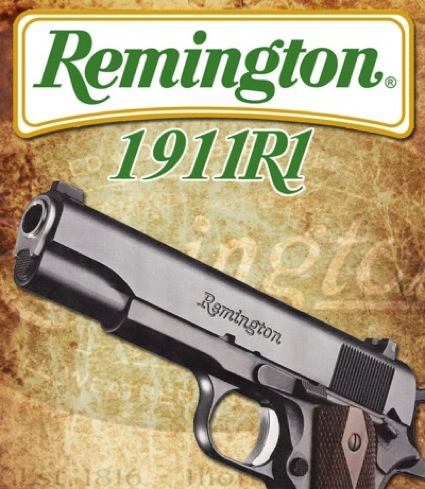 *UPDATE* For more information on this pistol click over to our exclusive sneak peek.

After almost a century, the Model 1911 R1 marks the Remington brand’s return to the manufacture of the legendary 1911 handgun.

In 1917, the U.S. Ordnance Department issued an order to Remington-UMC to manufacture 500,000 1911s for our fighting men in the armed services.

You could say the 1911 was firmly implanted in our DNA, and now after 91 years, its back.

The Remington-branded 1911 R1 is an A1 variant of the 1911 with modern upgrades. Like the original 1911, the 1911 R1 has a flat mainspring housing, short trigger and double diamond grips. 1911 devotees will appreciate the modern enhancements on the 1911 R1, such as a flared and lowered ejection port; beveled magazine well; loaded chamber indicator; high profile dovetailed single-dot front and two-dot rear sights; a crisp 3.5 – 5 pound trigger pull; and a match grade stainless steel barrel and barrel bushing.

It also has the Series 80-style firing pin block safety. The Remington 1911 R1 will be shipped in a custom carry case with two seven-round magazines and a barrel bushing wrench. Most importantly, it’s made in Ilion, New York, with all the pride, precision and out-of-the-box performance you have come to expect from the Remington brand.

The 1911 is the most customized and proven pistol design ever manufactured. This single-action, semi-automatic, magazine-fed, recoil-operated handgun chambered for the 45 ACP cartridge has left its mark on battlefields and at competitions all over the world.

On March 29th, 1911, this John M. Browning designed pistol was selected as the official sidearm of America’s Armed Forces. It was their standard-issue sidearm from 1911 to 1985 and is still used by some U.S. forces to this day. On May 14, 2010, the Remington 1911 R1 will be unveiled at the 139th National Rifle Association Annual Meetings in Charlotte, North Carolina, and will help this iconic American pistol shine brighter than ever.

Initially, the Remington 1911 R1 will be available through select independent dealers beginning in June 2010. Make it a point today, to own a part of history, the first Remington 1911 in 91 years.

*UPDATE* For more information on this pistol click over to our exclusive sneak peek.…