Short-barreled precision rifles are convenient to carry and extract from a vehicle. They’re also a bit more difficult to steady, and the short barrel reduces velocity. If you want to really stretch the range, velocity matters because it flattens trajectory and this makes range estimation less critical. When shooting distances extending beyond 500 yards, there’s no substitute for a long barrel and Magnum performance. Remington’s Model 700 XCR Tactical Long Range rifle is a “reach out and touch them” kind of rifle.

Remington has a long history of manufacturing tactical bolt-action rifles for military organizations and law enforcement use. When the department I first worked for established a designated marksman team, they acquired a Remington tactical-style bolt-action rifle in .308 Winchester. As a municipality, this was all the rifle they needed since shots were most likely to be inside 200 yards. That’s not the case with all law enforcement agencies.

Remington offers their 700 XCR Tactical Long Range rifle in .223 Remington and .308 Winchester but also in the .300 Winchester Magnum. The Magnum offering provides a distinct performance advantage at long range. For example, between 900 and 925 yards, the Federal 175-grain Sierra MatchKing load for the .308 Winchester will drop 2 feet. Federal’s 190-grain Sierra MatchKing load for the .300 Win. Mag. only drops 17 inches. 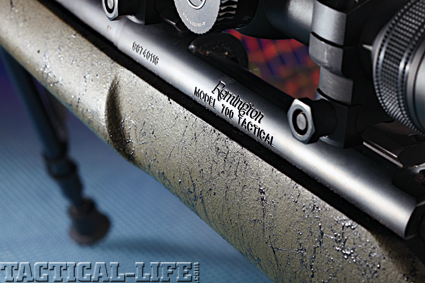 The forearm on the stock has a nice palm-filling swell that is appreciated when shooting off-hand or from hasty field positions.

This may not seem like that big of a deal. After all, you click in your elevation adjustments for the specific range you’re shooting. However, range estimation is the hardest part of long-range shooting and you can’t take your range estimation using a mil-dot reticle or a rangefinder as gospel. It’s very easy to make a 10- to 20-yard mistake at 900 yards. The increased velocity of the .300 Win. Mag. makes small range estimation errors less critical and increases the odds of first round hits at extreme range.

A flatter trajectory is not the only plus. As impact velocity drops, so does the ability for the bullet to expand and create large wound cavities. The velocity increase between the .308 Winchester and the .300 Winchester Magnum stretches this workable velocity range by at least another 150 yards or so. 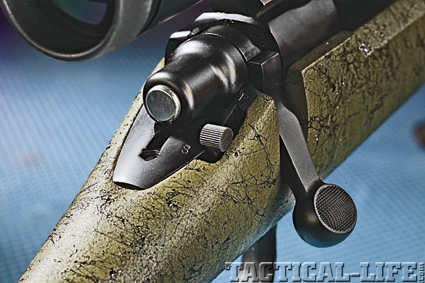 The rifle’s action is standard Remington 700 with a two-position safety. Note the black webbing on the rifle’s green finish.

Gun Details
One of the common characteristics of many long-range rifles is notable weight. Remington’s model 700 Target Tactical rifle is a perfect example; it weighs in at 11.75 pounds. Dress one of these rifles up with a tactical scope and a bipod and you’re pushing 15 pounds. The model 700 XCR Tactical Long Range is a lightweight, long-range rifle weighing 3.5 pounds less than the Tactical Target version and many other long-range rifles from other builders.

This lighter weight is achieved with a special, slim and trim Bell & Carlson stock, which has a molded-in aluminum bedding block that allows full-length barrel free-floating. The stock also has a uniquely shaped underbelly with a cut-out for a rear bench bag. Alternatively, you can also use the cut-out as a hook for your off-hand when shooting from the prone position or when shooting from a rest. I tried this while shooting with a bipod—the stock is also fitted with dual, front swivel studs for the purpose of bipod mounting—and it worked perfectly. This was true when both using just my hand under the buttstock or when I used a small beanbag and squeezed it with my hand to slightly adjust my aim.

Another aspect of the stock I found very appealing was the color and finish. Some manufacturers seem to think that the only appropriate color for anything tactical is black. That was Remington’s approach for a long time; the Remington 700 police rifle that my old department purchased years ago was available in any tactical color you wanted as long as that color was black. 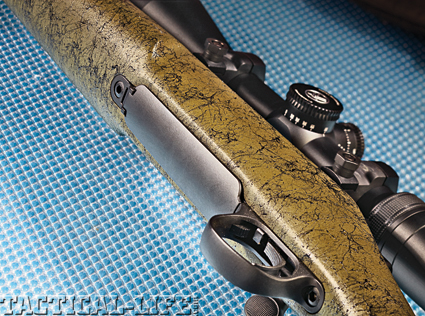 The finish on this rifle’s stock features, for lack of a better term, a ghoulish green background color that is streaked with a black web that provides a tactile feel and provides a medium shade of color to better blend with surroundings in the field or in urban settings. I liked it and consider the stock to be the best feature on this model 700.

In addition to this special stock, the rifle features a unique (Please turn to page )
fluted triangular-shaped barrel as well as the impressive 40-X externally adjustable trigger. The XCR designation means the rifle is built out of 416 stainless steel and all metal surfaces are coated with the black TriNyte Corrosion Control System.

As weird as the triangularly fluted barrel looks, it is sort of cool. It is also another way Remington cut weight from this rifle but still kept the long 26-inch tube that lets you extract all the performance you can from the .300 Winchester Magnum cartridge.

The trigger, on the other hand, is not anything new but is still outstanding. For this rifle, Remington stepped away from their new X-Mark Pro Trigger that comes standard on the Model 700 and went with their 40-X trigger. This trigger broke consistently on at just a shade over 2 pounds. More importantly, this was one of those triggers that let you feel when it was going to break—no creep and no surprises. This is the trigger Remington uses on the famously accurate 40-X line of custom rifles. These triggers are user adjustable from 1.5 to 3.5 pounds. And, adjustments can be made without taking the action out of the stock by means of a small hex-head screw. 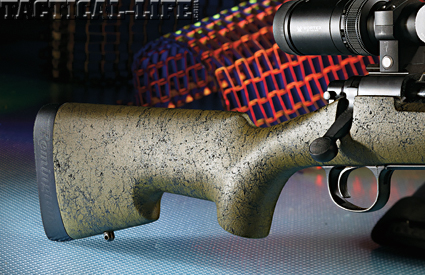 The bottom portion of the stock is cut out to interface better with a rear support bag or the shooter’s support hand.

Range Time
When I received the model 700 XCR Tactical Long Range rifle for testing, I was preparing for a West Texas mule deer, whitetail and aoudad hunt. I’d hunted this particular ranch before and knew that shots could be long and this would be a terrific way to check the long-range performance of this tactical rifle. With that in mind, the three loads I tested in this rifle were all generally considered hunting loads. However, both of the Barnes VOR-TX loads would work equally well in tactical situations.

I was genuinely impressed with how this rifle shot. The trigger was superb and the rifle was heavy enough that the big .300 Win. Mag. did not give me any recoil pain, but light enough that I did not mind lugging it around. I was also enamored with the accuracy and consistency of the Barnes VOR-TX ammo. Both loads produced standard velocity deviations in the single digits and averaged less than an inch for three five-shot groups at 100 yards.

Final Thoughts
With the XCR Tactical Long Range’s 26-inch barrel, it is not a compact rifle that would be easy to dig out of a patrol car. But, it is not overly heavy and if you are toting this rifle up multiple flights of stairs or a steep hillside, you’ll accept the long barrel and savor the light heft. From a pure tactical standpoint, my only complaint would be the absence of a detachable magazine. This rifle, like many versions of the Remington 700, has the common hinged floorplate. Even so, for agencies looking for a real, long-range rifle that’s easy to carry, the Remington model 700 XCR Tactical Long Range in .300 Winchester Magnum looks to be a viable option.

As it turns out, I never needed the rifle’s reach during the Texas hunt but could not resist killing a nice, flat rock out at 660 yards. The rock was not a menace, but I couldn’t resist the temptation. I center punched the rock and then, for grins and giggles, did it a second time—just to be sure. And maybe to show off just a little. For more information, call 800-243-9700 or visit remington.com.