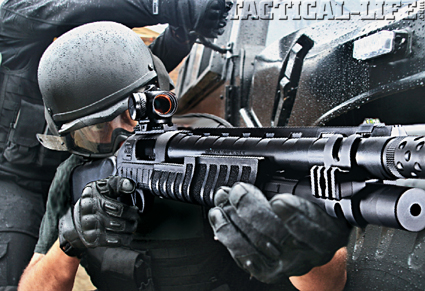 The Remington 887 Nitro Mag Tactical from Remington is a 3½” chambered pump action shotgun that makes extensive use of modern polymers, and takes the “Big Green” into the 21st century. Shown equipped with a Vortex Optics SPARC Red Dot electronic sight.

When it comes to trends in tactical/self-defense firearms, there are some easily identifiable classics. The 1911. The Glock. The AR-15. These are but a few examples of designs that become synonymous with the duties for which they were developed. And, they earned their iconic reputations through a combination of good design, reliable functioning and irrefutable performance.

However, when it comes to the realm of pump action shotguns, few have reached the level of success of the revered Remington Model 870. First released in 1950, the simple, affordable and utterly reliable design went on to dominate not only the sporting realm but the law enforcement realm as well, with 12 gauge 870s locked into cruiser gun racks from coast to coast here in the United States.

With a history now spanning six decades, the Model 870 is no spring chicken. Is it still considered a frontline tactical shotgun platform? Undoubtedly. Is it still the first choice of many of those in the know? Assuredly. However, the technology of firearms manufacturing has changed a great deal in the many decades since the development of the first Model 870. At its heart, the 870 is an all-steel pump action shotgun designed in a different era. 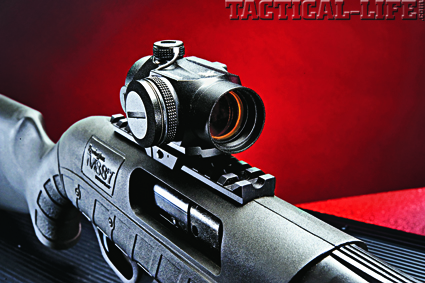 The new 887 comes standard with an integrated barrel rib and a Picatinny optic rail, equipped here with a Vortex SPARC Red Dot.

A big part of the revolution in firearms design since the 870’s introduction revolves around the use of materials more modern than the walnut and steel so commonly employed in the earliest days of the 870. Just as the Glock popularized and legitimized the use of advanced polymers in handguns frames, several competitive models of shotguns on the market today have made extensive use of polymers in their design. The result is a wave of shotguns that are lightweight, weather resistant and highly affordable.

Although Remington may have a reputation for being a very traditional company with strong ties to its roots, it has definitely been showing that it can think outside the box, exemplified by advanced designs such as the ACR and the VTR variants of the Model 700. This innovative thinking has not been relegated to just the company’s rifle lines, but also recently applied to its tried-and-true pump action shotgun line.

The result of this effort is the Model 887 Nitro Mag Tactical, a 3½-inch chambered, 12 gauge pump action shotgun manufactured from cutting-edge materials that is as radical internally as it is externally. In fact, just one glance at the new 887 tells you that this shotgun is something different with racy angled lines along the stock, receiver and action, as well as the extensive use of polymers in its construction.

As soon as you pick up the 887 Nitro Mag Tactical, you can tell that it is radically different. First and foremost is its weight, tipping the scales at a feathery light 6.8 pounds. The source of this light weight is also related to the most truly unique quality of the shotgun — its “finish.”

The heart of the 887 is what Remington has dubbed ArmorLokt Technology, and it is the source of not only the shotgun’s light weight but also its claim to nearly unstopp-able hardiness. ArmorLokt is a layer of polymer that coats both the receiver and the 4140 steel cold hammer-forged smoothbore barrel. However, it would not do this shotgun justice to leave the description of these parts at that.

The receiver, no doubt aiding the shotgun in achieving its extremely light weight, features a skeletonized 1010 steel chassis that is infused with the ArmorLokt material, providing a weather-resistant tough receiver that not only is light but also resistant to scratches, chips or rust. To allow the use of such a radically designed receiver, the 887’s barrel employs a stressed-steel barrel extension into which the shotgun’s bolt directly locks.

The 4140 barrel is bonded with a matching ArmorLokt coating via an injection molding process that creates a tough, impenetrable exterior that not only resists the elements but also in theory helps dissipate barrel heat more quickly. Interestingly, the barrel sports a solid barrel rib along the top of its 18.5-inch barrel that is formed completely from the ArmorLokt material. The rib offers several advantages. In addition to helping mitigate the mirage effect from barrel heat as does a ventilated rib, the 887’s rib also features longitudinal grooves along its top surface that help break up sunlight for a better sight picture.

Topping off the muzzle end of the barrel is a removable HiViz green fiber optic front sight that picks up sunlight to provide the shooter with a bright green dot out front. Also of note at the muzzle is a Rem Choke-pattern choke tube system, with the 887 coming standard with an extended “Tactical Choke Tube.” This tube is configured in a “breacher” style with a serrated face and cylindrical ports around the circumference. The inner diameter of the choke is 0.782 of an inch, and the rear portion of its exterior features circumferential ribs that allow users to hand-tighten or unscrew the choke.

Rounding out the use of polymers in the 887 is the buttstock, forend and trigger plate (or what many would call the trigger housing). The bolt carrier assembly and magazine tube are not ArmorLokt, but rather feature a black oxide finish — as does the extended choke. 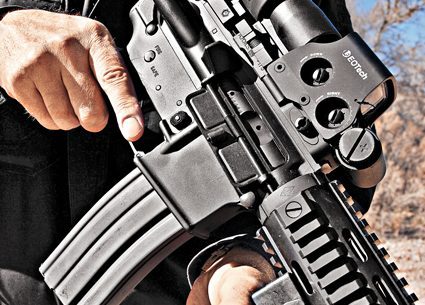