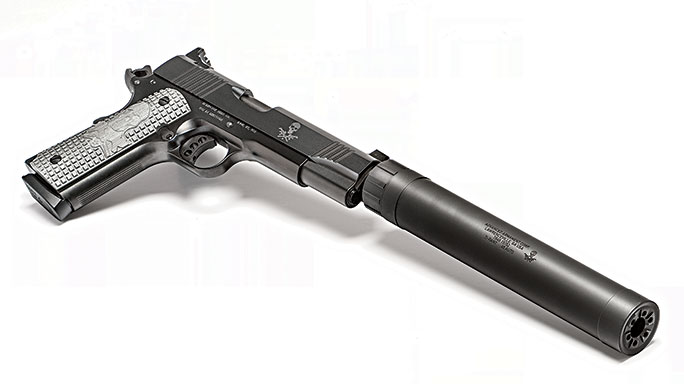 1 of 9
Photo by Richard King
Remington, AAC Join Together For 1911 Pistol Kit
The AAC 1911, a Remington R1 Enhanced Threaded Barrel branded with AAC’s markings and grips, comes with a Ti-RANT suppressor. 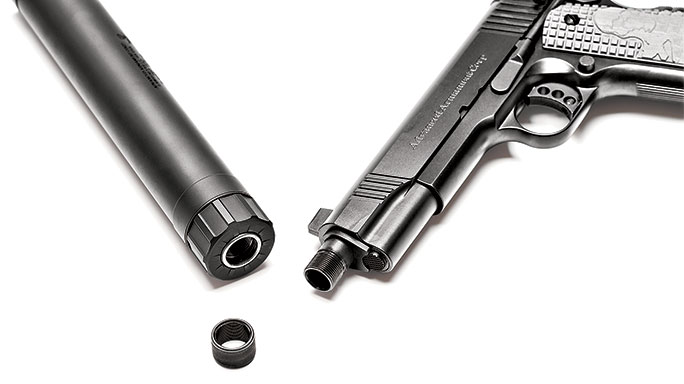 2 of 9
Photo by Richard King
Remington, AAC Join Together For 1911 Pistol Kit
“The AAC 1911 is a full-size pistol made from a forged carbon steel slide and cast frame.” 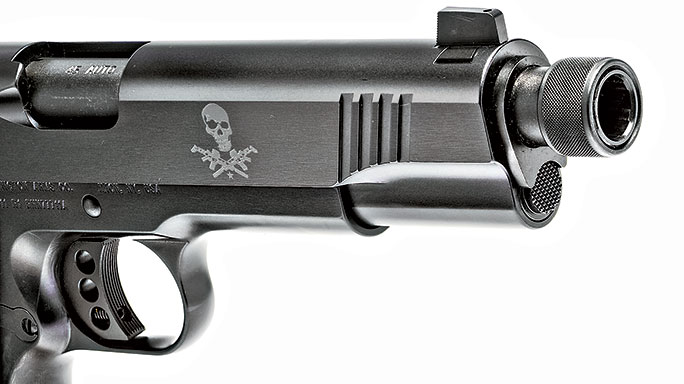 3 of 9
Photo by Richard King
Remington, AAC Join Together For 1911 Pistol Kit
The 5-inch, match-grade, black-oxide-finished barrel has .578-28 threading, and a thread protector is included with the package. 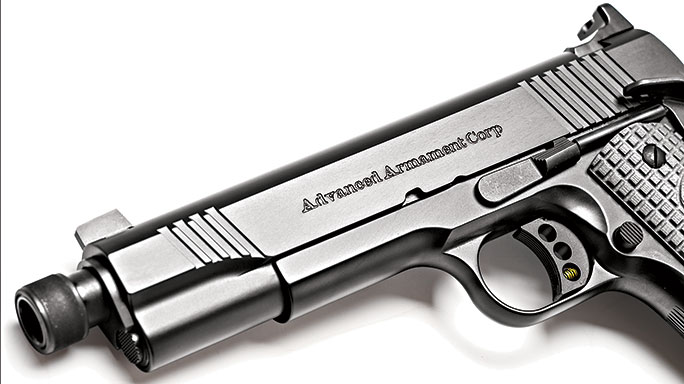 4 of 9
Photo by Richard King
Remington, AAC Join Together For 1911 Pistol Kit
The lightweight, skeletonized trigger, also given a stealthy black oxide finish, is adjustable for overtravel. 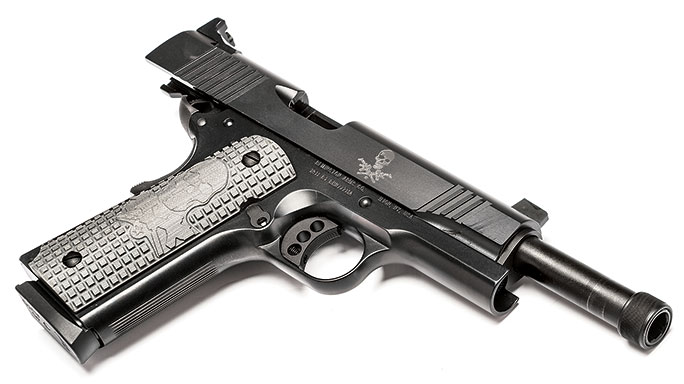 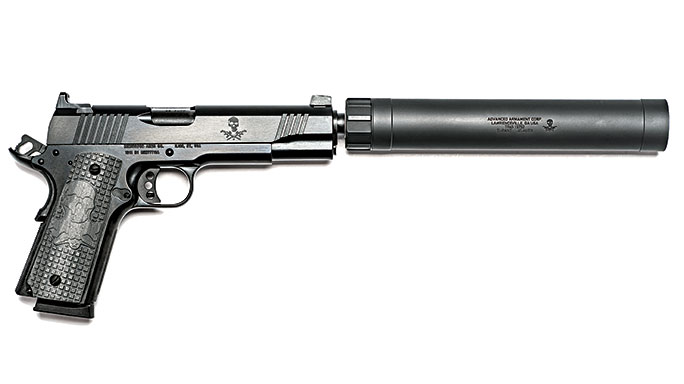 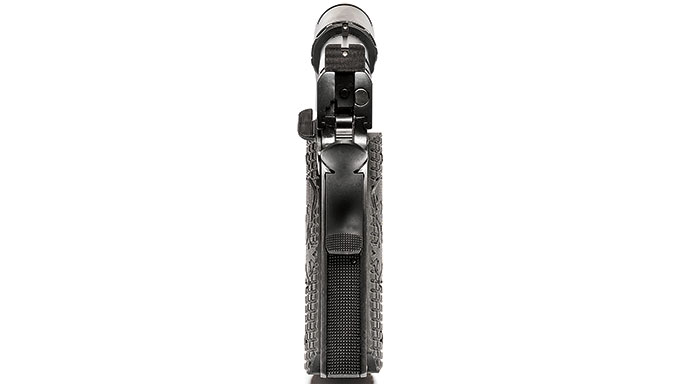 7 of 9
Photo by Richard King
Remington, AAC Join Together For 1911 Pistol Kit
The tall front and rear sights have white dots that shooters simply line up into a “figure eight.” 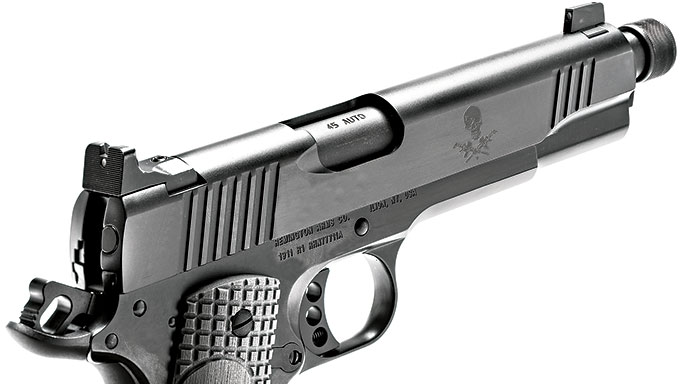 8 of 9
Photo by Richard King
Remington, AAC Join Together For 1911 Pistol Kit
The AAC 1911’s front and rear slide serrations are easy to grasp for manipulations without being too sharp or prone to snagging. 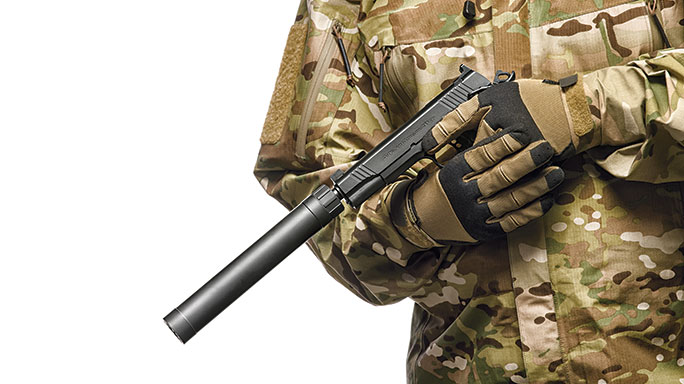 9 of 9
Photo by Richard King
Remington, AAC Join Together For 1911 Pistol Kit
The AAC 1911, a Remington R1 Enhanced Threaded Barrel branded with AAC’s markings and grips, comes with a Ti-RANT suppressor. 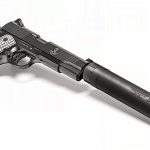 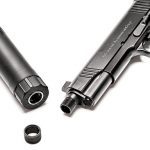 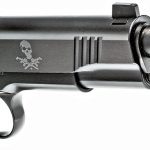 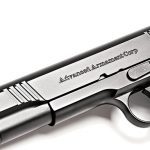 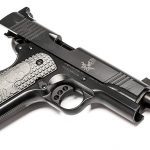 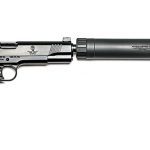 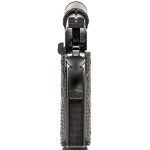 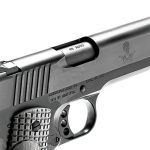 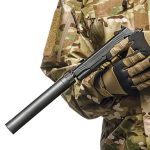 After about 70 years since its last 1911 was made in Ilion, New York, Remington Arms restarted production of the classic 1911 about four years ago.

Since then, the Remington 1911 line, all of which is made at the company’s Ilion location, has grown to include five models, including the most specialized model—the 1911 R1 Enhanced Threaded Barrel. It should be noted that in the spring of 2014, Remington announced that its 1911 production would be moved to its new facility in Alabama.

The pistol tested for this article is a branded, limited edition R1 made for AAC. AAC is one of a stable of firearms and accessory companies owned by Remington Outdoor Company, which also owns the Remington, Bushmaster, Para USA and Marlin brands. The AAC 1911 is nearly identical to the 1911 R1 Enhanced Threaded Barrel model. However, the grips and markings are distinct from the Remington variant. The AAC 1911 has gray VZ “Grenade” AAC logo grips, and the slide is prominently laser engraved with “Advanced Armament Corp” on the left and has a light etching of the AAC “skull and crossed guns” logo on the right. The AAC 1911 comes in a Pelican plastic case with a custom-cut foam interior to fit the pistol, suppressor, extra magazines and tools.

The AAC 1911 is AAC’s second branded pistol, following a 1911 made several years ago by Nighthawk Custom. That pistol was a very high-quality custom gun with a much higher MSRP, while the current offering is more affordable but still has features that appeal to suppressor users.

The AAC 1911 and Ti-RANT suppressor are only available as a complete package sold by distributor AccuSport to Class 3 dealers. AccuSport explains that this is the first time that a pistol and suppressor have been sold together, and it will likely appeal to the collector market.

The AAC 1911 is a full-sized pistol made from a forged carbon steel slide and cast frame. As mentioned, it ships in a foam-lined case with slots custom-cut for the pistol, magazines, cleaning rod and AAC Ti-RANT suppressor.

The AAC 1911 locking system is the conventional Browning design that uses a swinging link to attach the barrel block to the pistol’s frame via the slide stop pin and the standard GI recoil spring guide rod that allows disassembly without tools.

Like all Remington 1911 pistols, the AAC 1911 incorporates what many call the “Series 80” firing pin safety, named after what Colt referred to this system as when it first was released. The Series 80 system incorporates a spring-loaded plunger into the slide that prevents the firing pin from moving forward unless the trigger is depressed. The design allows pistols to be carried with a round in the chamber, because dropping the pistol on its muzzle would not move the firing pin forward to strike the primer. The original 1911 design lacked this feature, as do other current production models that use other drop-safe designs.

Most 1911 pistols sold today have many features (extended beavertail grip safety, lowered/flared ejection port, skeletonized trigger, lightened hammer for a faster lock time, etc.) that two decades ago would have been considered customization. The AAC 1911, however, has all of these and adds some additional touches that have real value for the shooter, especially when running a suppressor.

“For enhanced accuracy, the barrels and bushings are mated together at production and remain together until final assembly into the same gun.”

The fixed sights are high profile to allow a sight picture with the front sight just barely clearing the edge of the Ti-RANT suppressor. These sights are high quality, durable and made of steel with fine horizontal serrations on the rear edges to reduce glare and lend a crisp image to the shooter. They also have a single white dot on the front and a smaller dot just under the notch on the rear to make them easier to see and align to deliver a quick shot. Unlike many rear sights, there are no sharp edges to cut your hands. The best feature is the shape of the rear sight, which acts as a cocking ledge should an injured operator need to rack the slide one-handed by hooking the sight onto a holster, belt buckle or boot. Adjustment for windage is done by loosening a setscrew and drifting the rear sight in its dovetail.

A lot of care has been taken to give the shooter a very secure grip on the AAC 1911. The G10 grips have aggressive checkering and both the flat steel mainspring housing and the “memory bump” on the extended grip safety have 20-lpi checkering. The frontstrap has vertical serrations. It is nice to see that Remington has retained a steel mainspring housing. The forged carbon steel slide has front serrations for doing a press chamber check. Both the front and rear slide serrations are distinct enough to get a grip but do not feel too sharp.

Because the grips are thicker than on many 1911 designs, the controls are slightly modified over standard dimensions to increase this pistol’s ergonomics. The magazine release is longer while the safety lever is wider and better shaped to allow the shooter easy access and manipulation.

The AAC 1911 has a lightened, skeletonized, medium-length trigger that has a screw to adjust its overtravel. To keep the pistol stealthy, the stainless trigger has been treated with black oxide.

“The AAC 1911 is a full-size pistol made from a forged carbon steel slide and cast frame.”

The eight-round magazines have extended floorplates that act as bumper pads. Anyone who has used a 1911 more than casually can attest to the value of a bumper pad compared to a flush-fit magazine design to ensure the magazine is fully inserted, especially during a speed reload.

The AAC 1911 also has a match-grade, blackened stainless steel barrel with .578-28 threading and treated with a black oxide finish. For enhanced accuracy, the barrels and bushings are mated together at production and remain together until final assembly into the same gun. A thread protector is also included to preserve the fine threads from damage.

I tested the pistol’s accuracy using a Caldwell rest at 25 yards, which is our testing protocol for full-size pistols. The AAC 1911 shot very well, with the average size of all groups measuring well under 3 inches. It’s been my experience that Remington firearms tend to shoot most accurately using Remington ammo, and the AAC 1911 was no exception to the rule. The best single groups of 0.94 inches and 0.98 inches were shot using Remington 230-grain full metal jacket (FMJ) and Hornady 200-grain jacketed-hollow-point (JHP) loads, respectively, measured at the centers of all shots. The average group size of the Remington ammo was a very respectable 1.75 inches.

The handling qualities were enhanced by the aggressively textured grips, and the bumper pads on the magazine floorplates made reloading much more certain than using magazines without them.

The sights worked very well and were easy to pick up, and they did not distract me from maintaining a clear front-sight focus when used without a suppressor.

Using a pistol equipped with a suppressor almost always leads to a compromise in the sight picture because the sights are not high enough to clear the edge of the can. Though the sights on the AAC 1911 are high profile, the Ti-RANT’s 1.38-inch diameter still occludes some of the sight blades. Replacing the rear sight with a Leopold DeltaPoint reflex sight helped me acquire targets in rapid fashion, as it gives a single aiming point higher than the front sight and high enough to clear the suppressor. Aiming points are either a 7.5-MOA triangle or a 3.5-MOA round dot. I prefer the triangle since the upper point makes a smaller, more precise aiming point. This unit comes with adapters to mount onto a variety of pistols.

The AAC 1911 is both a collectible piece and a very good shooter. It is one of only a few pistols that come from the factory equipped with a cocking ledge rear sight that will set you back about a $100 if added later. This feature is something that I would recommend for any tactical pistol. The AAC 1911 may be hard to find given its limited production, but the nearly identical Remington Enhanced Threaded Barrel 1911 is currently produced. 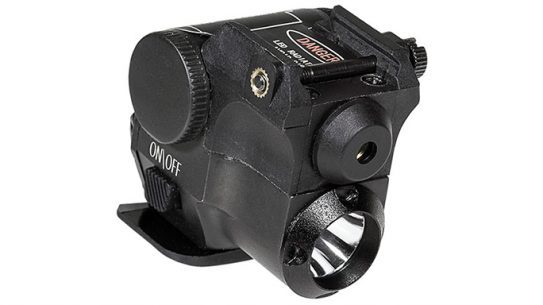 The all new Compact Green Pistol Laser Light Combo from Firefield features both a...