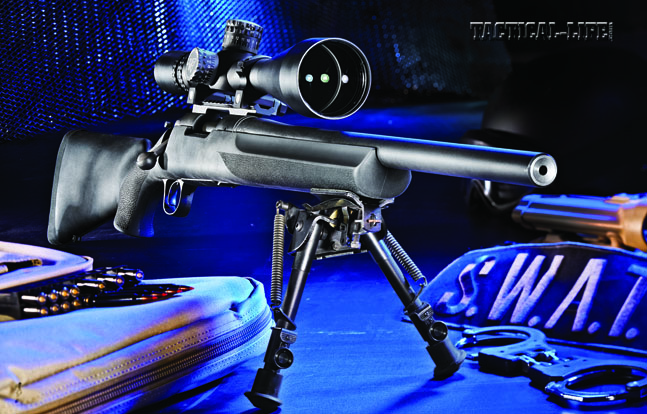 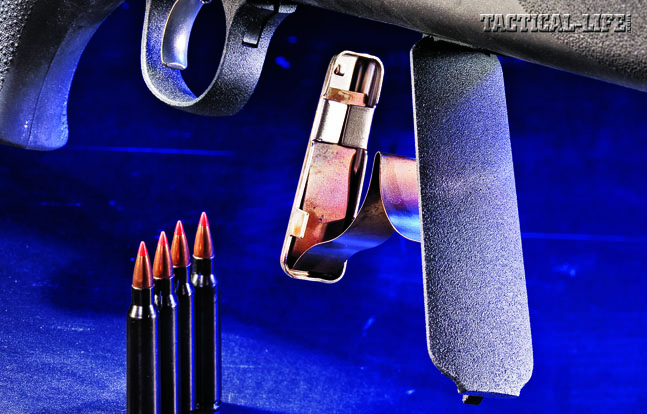 2 of 6
Remington Model 700 SPS Tactical | Gun Review 2
The rifle’s magazine holds five rounds, and the hinged floorplate prevents users from having to cycle each unfired round through the action. 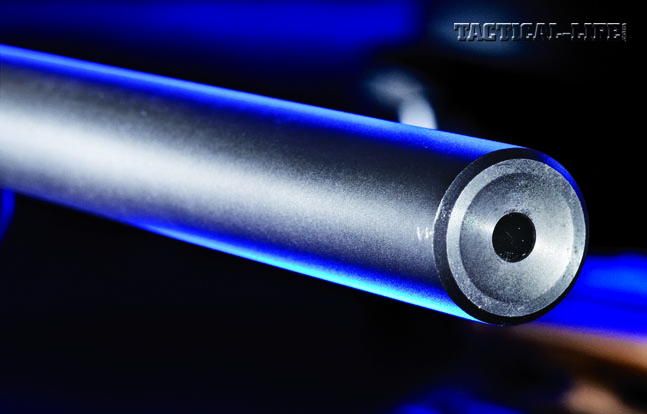 4 of 6
Remington Model 700 SPS Tactical | Gun Review 4
Hogue’s OverMold stock is very durable and easy to grip, and the thick rubber Hogue buttpad helps absorb some of the .308 recoil. 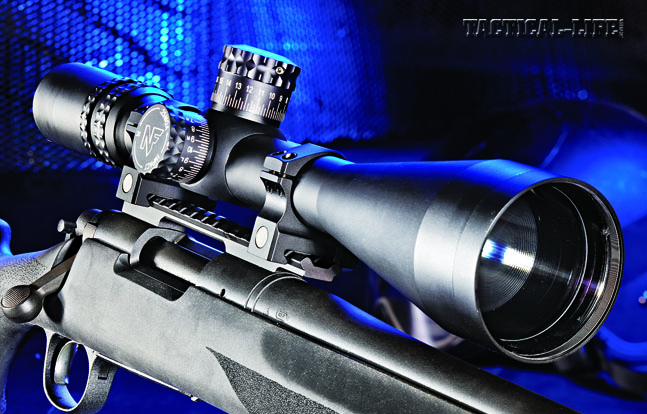 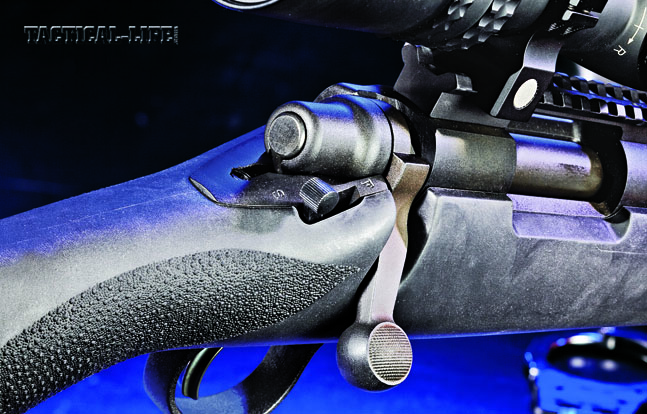 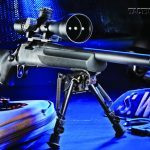 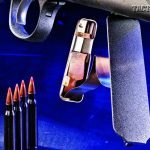 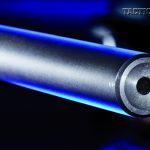 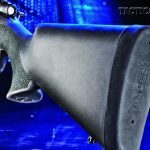 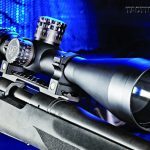 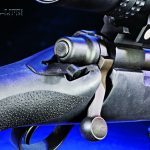 With all the furor over the AR platform today, many folks forget about the “other” rifle serving and protecting our families, communities and country—the bolt action. Countersniper work and precision shot placement are still usually viewed as the domain of the bolt-action rifle, especially as the distance to the target increases, which explains the presence of bolt actions in Iraq and Afghanistan and in the hands of many domestic SWAT team marksmen.

Perhaps the best-known Remington bolt gun is the Model 700, which has been around since 1962—a whopping 50-plus years. Having dropped virtually every game there is to be hunted, the Model 700 is also found in the tactical environment, where for years it has served as the U.S. Marine Corps’ M40, now the M40A5. It’s also served as the U.S. Army’s M24 Sniper Weapon System, now known as the M24A3 package, since 1988.

During all that time, many law enforcement officers were following in the military’s footsteps and capably utilizing Model 700-based rifles, perhaps due to their prior military service and exposure. During the early, lightly equipped law enforcement years, when many agencies couldn’t afford to provide bolt guns for their officers, many rural LEOs had personally owned Model 700s hunting rifles. Naturally, many of them added their familiar Model 700s to their patrol car armament, stuffing them in the trunk with everything else, for those events when dangers of the two- or four-legged variety presented themselves.

As for durability, rest assured that if the M40 can function after being dragged through the jungles of Vietnam and the deserts of Iraq and Afghanistan, the Model 700 can take the abuse LEOs heap on their equipment. In the right hands, the Remington 700 can be counted on to provide the accuracy needed to stop trouble in its tracks.

For those who want a tactical Model 700 but can’t dig into Uncle Sam’s deep pockets and pull out a M24 or M40, Remington offers its Model 700 SPS (Special Purpose Synthetic) Tactical. From the get-go, the rifle has many of the additions users would request to make a Model 700 more “tactical.” Each upgrade ends up making the SPS Tactical more usable for LEOs when they have to deploy it.

Gun Details
Remington lists the SPS series (available in .223 Remington or .308 Winchester) as putting “legendary Model 700 accuracy and reliability” in a “no-frills, tack-driving, game-dropping machine.” Remington Model 700s have impressive reputations, with touches that have survived the last five decades, such as the externally adjustable trigger—known as the X-Mark Pro trigger today—and its hammer-forged barrel.

The barrel on the SPS Tactical is a heavy-contoured varmint barrel bobbed to 20 inches and finished with an 11-degree target crown, making it handier for movement through and around tight brush, narrow halls or any other obstacles the user will have to navigate on the way to their “hide” or hasty position. The resulting barrel retains plenty of rigidity and mass. Hammer-forged barrels seem to be a “love ’em or leave ’em” proposition for many, but there is no doubt that Remington’s barrels have always enjoyed an enviable reputation.

As a nod to the tactical uses to which the SPS Tactical will be put, Remington has added a black, synthetic Hogue stock with a 13.5-inch length of pull. It’s a durable polymer platform enhanced by black “OverMolding” for improved control in nasty weather. The Hogue OverMolding is not only slightly tacky, but its resilience protects the user from errant “bump” noises. The Hogue stock also has what Remington calls a semi-beavertail forend that should facilitate steadiness no matter what type of rest (or hasty rest) is used. Because the goal is to provide a quality precision rifle at a good price point, the stock uses dual-point pillar bedding, which certainly works, rather than more expensive bedding systems.

Of course, the Hogue stock wears a cushy rubber Hogue recoil pad that stays secure against the shoulder. Its effectiveness is not that noticeable with a .223, but with the other offered chambering, .308 Winchester, it has got to be nice! Lastly, there is a handy hinged-floorplate magazine.

Range Time
For testing at the range, I attached an Evolution Gun Works rail from Brownells to the Remington’s receiver and topped it off with my CounterSniper 2-16×44 Crusader scope made from aircraft-grade aluminum. The CounterSniper rings allowed for the lowest mounting of any of the setups I had on hand, and the scope has a really sharp, crisp view. A lower-mounted scope allows for a better, more consistent cheekweld—an important factor for wringing the most precision from a precision-oriented rifle.

Out of the box, the Remington SPS had a trigger set at 5.25 pounds, which seemed a little high for the best work. Following Remington’s instructions on how to adjust the trigger, I reduced the trigger pull to about 4.2 pounds, which is still on the high side for some but proved just fine for an experienced 1911 shooter like myself.

I tested the Remington SPS with three separate ammo loads, all of which performed excellently. Because of the barrel’s 1-in-9-inch twist rate, I chose ammunition with lighter bullets (52 to 62 grains). Groups hovered consistently in the 0.5- to 0.75-inch range, with the 55-grain load always seeming to come out on top.

With everything looking good at 100 yards, I rolled out my U.S. Peacekeeper shooting mat and tried shooting from prone at 200 yards (the longest distance that is offered at the range that I use for testing firearms). I squeezed most of the shots into groups smaller than an inch. Then I tried a few fun exercises. With my Tubb Enterprises’ Tango Tactical Stake Target at 200 yards, I moved between several positions, taking shots at the Tango’s “head” and each time receiving that satisfying ring of steel. The Remington Model 700 SPS Tactical is a shooter!

After giving the Model 700 SPS Tactical a good workout, my opinion of the trigger changed somewhat. If the rifle, like many AR patrol rifles, is to be shared by multiple officers, a trigger with a slightly heavier weight may prove beneficial in providing a buffer when used by someone who is not completely familiar with its trigger. If the pull weight does become a problem, there are excellent replacements available.

Final Thoughts
I can picture the Model 700 SPS Tactical in a number of law enforcement scenarios. Stored in a protective case in the catch-all patrol car trunk, it could be brought into play quickly. While not every officer may need a tactical bolt-action rifle, several still need to be available for each shift. The number needed depends on the size of the force and the area covered. Not every crisis can wait for a SWAT team to roll out—an active-shooter situation is a prime example.

Remington’s Model 700 SPS Tactical is an excellent choice for an issued precision rifle. It offers a great value for the suggested retail price and provides a large amount of usability for law enforcement use. Actually, I think it is a good deal for anyone looking for a handy-sized precision rifle for any use! For more information, visit remington.com or call 800-243-9700. 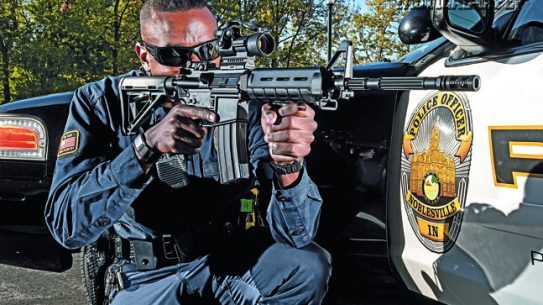 Affordable, accurate, Magpul-upgraded AR ready to take down any threat!