0
SHARES
66
VIEWS
Share on FacebookShare on Twitter
The compact 700 SPS is available in both .223 and .308, and has an all-black, synthetic Hogue Overmold stock with a wider forend design for additional stability. It is an excellent choice for law enforcement with ammo, such as Black Hills match load, as well as the loadings tested by the author. Leupold’s Mark 4 4.5x14x50mm ER/T scope might offer a bit more magnification than is needed on the 700 SPS, but it is an excellent optic and allowed the SPS to shoot at its best.

The police precision marksman holds a unique place in American law enforcement. This is the one police position in which the officer might be able to shoot offensively instead of defensively, i.e. in response to the actions of another — an act that would give the officer reasonable grounds to believe that they are trying to seriously hurt or kill someone. This means that the suspect has done something to make the officer believe that death or injury is darn near inevitable, not just possible. The police sharpshooter who is sitting behind the scope watching an unfolding event, such as a hostage situation, might still be reacting to the action of the suspect, but he or she has the opportunity to shoot when it best serves the resolution of the situation, i.e. stop the act before it happens. For many years, following the lead of the U.S. military, police agencies nationwide have relied on the Remington 700 bolt-action rifle platform for such duties and it has served them well. But does the Remington rifle used by the military (M24) necessarily meet the need of American law enforcement? 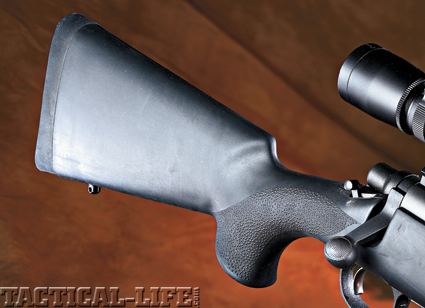 The all-black, Hogue Overmold stock is soft to the touch and the sure-grip is very comfortable for extended, long-range shooting sessions.

A study conducted several years ago by the National Tactical Officer’s Association revealed that the “average” sniper engagement for American police agencies was just over 50 yards. If I recall correctly, the longest shot ever taken by an American police sharpshooter was just over 170 yards. This being the case, do American cops need a gun that is used out to 500 meters, or would a platform that is lighter and more compact better serve them? As it turns out, Remington was thinking the very same thing when they introduced their Model 700 SPS (Special Purpose Synthetic) with a shorter 20-inch barrel. The Model 700 SPS Tactical combines the features that made the Model 700 action the number one choice of police and military marksmen and the Model 700 SPS one of the most popular bolt-action rifle series in America. Utilizing a well-designed overmold stock, Remington’s new X-Mark Pro trigger and other accuracy-enhancing features makes this the perfect police tactical rifle at a very affordable price. 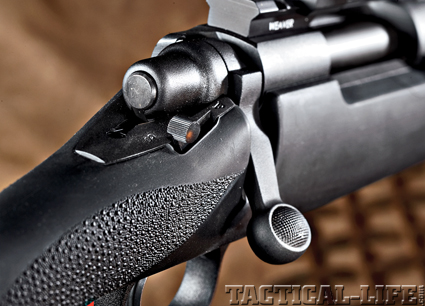 The SPS Tactical employs the proven Model 700 action. Note the safety located just to the rear of the bolt handle.

The Remington 700 SPS Tactical is available in both .223 and .308 and has an all-black, synthetic Hogue Overmold stock with a wider forend design for additional stability. This soft-to-the-touch, sure-grip stock is very comfortable for extended, long range shooting sessions and assures a positive grip when the weather is not cooperating. It will also stand up to the abuse of law enforcement sharpshooter operations, such as being dragged across rough terrain or dropped unexpectedly from some unknown height. (I once watched a police marksmen drop his rifle out of a third story window when he was stung by a bee, which did result in damage to the rifle. Just goes to show that you never know what will happen in a tactical operation.) The dual point pillar bedding guarantees a solid interface between the action and stock to prevent point-of-impact shifts and allows the barrel to truly “free float.” Combining this with their