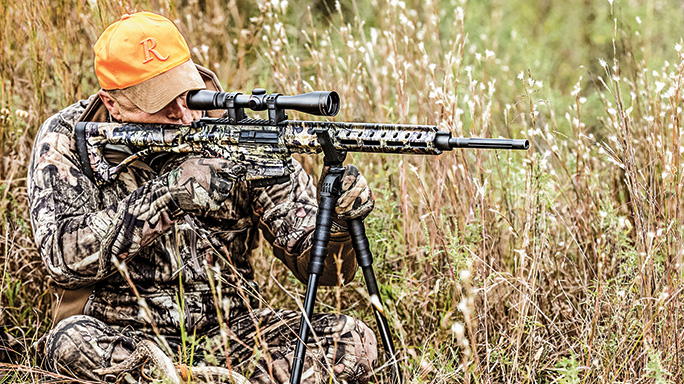 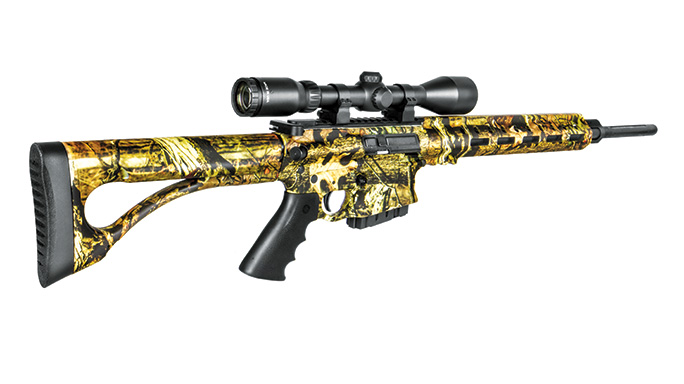 2 of 4
R-25 GII: Remington’s New Hunting Machine
The R-25 GII’s light weight, smart, styling and distinctive camo finish make it perfect for hunting, and Remington offers it in a variety of field-ready calibers, including .308 Winchester (shown), .260 Remington, .243 Winchester and 7mm-08. 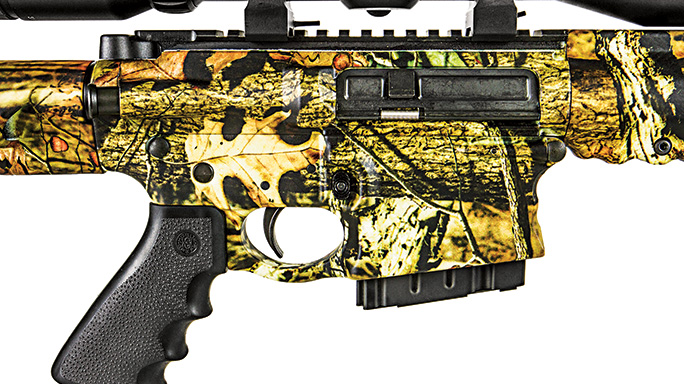 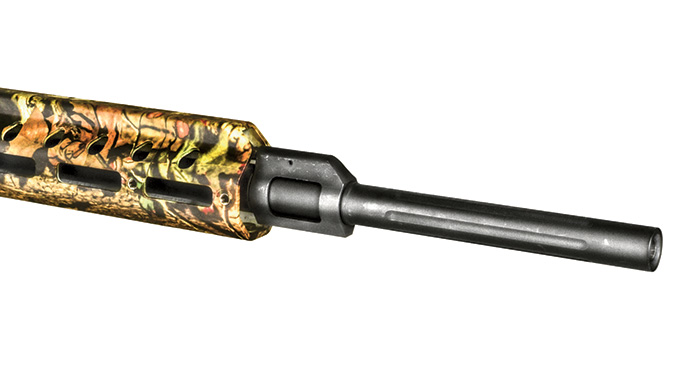 4 of 4
R-25 GII: Remington’s New Hunting Machine
The rifle sports a fluted barrel, a low-profile gas block and a handguard drilled and tapped for adding rails. 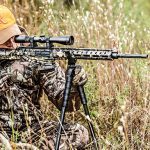 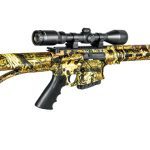 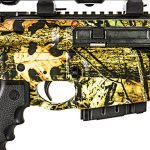 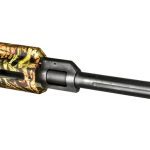 One of the most sought-after features of a rifle used for hunting is light weight. That’s not to say that the accuracy, reliability, trigger and other attributes are not important, but if a gun has all of those other features yet weighs too much to comfortably tote around the field all day, it’s likely to be left at home.

To address this problem, Remington borrowed the basic features of the GII from its sister company, DPMS, and used them to build the new R-25 GII modern sporting rifle that is chambered in either .308 Winchester, .260 Remington, .243 Winchester or 7mm-08. The gun weighs 7.62 pounds unloaded and is more than a pound lighter than the previous generation R-25. Remington says that it is the lightest AR-style gun chambered in .308 Winchester that is now available anywhere.

To reduce weight, the gun is a bit smaller than the typical .308/7.62mm NATO AR. Remington and DPMS tossed out the old designs for the upper and lower receivers and came up with new ones. The receivers are still made of mil-spec aluminum forgings and have the same appearance as older versions, but because they are smaller, they weigh less.

Inside the flattop upper receiver, the forged steel bolt carrier has been reduced in size, which reduces weight. And to eliminate the possibility of the bolted-on gas key working loose, the company replaced it with one that is integral to the carrier, except for the pinned tubular extension, which engages the gas tube.

Also contributing to the reduction in weigh is the eight-sided, carbon-fiber handguard that allows the barrel to float freely, enhancing accuracy. It’s vented to allow air circulation for cooling, and forward at the 3, 6 and 9 o’clock positions, it is drilled and tapped for attaching short rail sections for mounting accessories like sling swivels.

Out front at the muzzle, Remington has recessed the crown for protection against damage that could rob accuracy. The 20-inch, fluted, stainless steel barrel is coated with Teflon for protection against the elements, and is black to reduce glare. The gas block of this direct-impingement gun is positioned just in front of the handguard, but there is unfortunately no attachment point for a front iron sight.

The charging handle is fairly standard and unobtrusive as charging handles go, but it provides enough gripping surface to facilitate racking the bolt. Should a round fail to chamber, the GII version of the R-25 has a bolt forward assist on the right side behind the ejection port.

Since this is designed as a hunting gun and is likely to see the use of many different types of bullets, including soft-pointed ones, Remington installed a steel feed ramp to encourage all types of bullets to feed properly. Remington also says that this feature is key to the reduced size and weight of the rifle.

To enhance ejection, dual ejectors have been installed. The dual ejector system increases the likelihood of proper ejection, especially if one of the ejectors should fail due to fouling or a broken spring. The company has also chosen to use an elastomer extractor cushion, for lack of a better description, instead of a spring. When compressed, it applies pressure like a spring, causing the extractor to grip the case rim. The extractor is also made of a new, undisclosed material that Remington says is nearly impervious to breaking.

The triggerguard is fixed and is integral to the receiver instead of hinged, and the magazine well has a fairly pronounced bevel to encourage fast reloads. The magazine release and the bolt release are located where one would expect them to be on an AR. The gun comes equipped with a Hogue pistol grip that can be removed and replaced with a different aftermarket grip should the owner choose to do so.

The days of terrible factory triggers are passing, and Remington is participating in the trend. The gun I tested sported the standard two-stage match trigger and broke at just over 5.5 pounds. Remington also installs a skeletonized buttstock that contributes to the reduction in weight. At the rear is a SuperCell buttpad that does an effective job of reducing felt recoil.

Finally, Mossy Oak Break-Up Infinity camouflage covers the buttstock, receivers and handguard. Other parts like the recoil pad, grip, ejection port cover, magazine, gas block and barrel may or may not come with the camouflage finish.

A feature that is not readily apparent is the presence of three flutes beneath the barrel nut that Remington says are there to vent gases forward instead of back into the receiver should the gun suffer a case separation when firing. Another less-than-obvious feature of the R-25 GII is that, even though the gun is smaller and lighter than other .308 ARs, Remington says the gun has the same dimensions as a standard 5.56mm AR for gas-tube-to-bore and bore-to-rail distances. This makes more aftermarket handguards compatible with the gun. Additionally, the rail height above the bore is the same as a standard M4, making more optics and mounts compatible.

In December of 2014, I had the opportunity to get acquainted with some pre-production specimens of the R-25 GII when Remington unveiled them at Gunsite near Paulden, Arizona. Gunsite is the world’s premier firearms training center and was founded by Colonel Jeff Cooper. The folks at Gunsite have been training everyone from regular law-
abiding U.S. citizens to elite warriors for many years, and have an outstanding record of providing quality instruction.

While time was not allotted for a formal evaluation of the gun and accuracy tests were not conducted—these were pre-production guns anyway—myself and other writers sent many, many rounds downrange through several guns in heavy rain. Speaking for myself, the guns I fired suffered no malfunctions and I was able to readily hit my targets out to 200 yards very quickly. The gun proved to be fast handling and completely accurate for the hunting chore.

Guns were fired from different positions, including kneeling, sitting, prone and off of improvised rests. Remington had installed and zeroed several different optics on the test guns, and I heard only favorable comments from all the shooters despite the poor weather conditions and difficulty they added to the test shoot. One impression that stuck with me was that recoil was noticeably less with this .308 AR-style gun compared to many other .308-chambered ARs I have fired.

Some months later, I received a production R-25 GII for evaluation. While some of the features differed from the guns used at Gunsite, the gun functioned reliably and I had the same impression of reduced recoil. The test gun was furnished with one four-round magazine, but a Lancer L7 Advanced Warfighter magazine with a higher capacity also worked. Using a Burris Signature Series 3-10x40mm scope off a bench, the gun printed groups entirely acceptable for hunting—and much better than production hunting guns of 30 years ago.

Even though Remington developed this gun with the hunter in mind, it has features that will make it at home in many different roles, including simply shooting for fun. 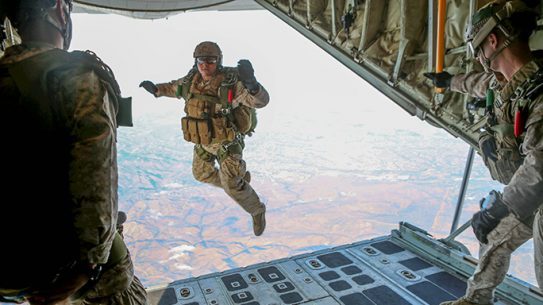