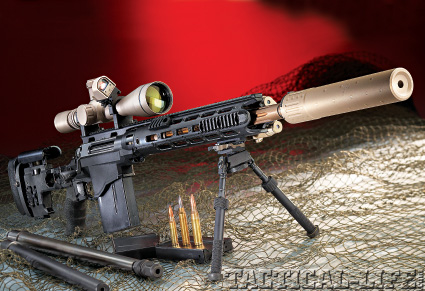 Remington’s Model 700 bolt action has been in production since the early 1960’s and has acquired a cult following in the 40+ years since. And not without reason — the Model 700 action is one of the most simple and robust actions ever produced. 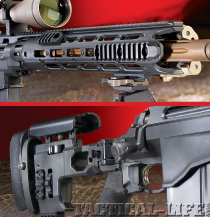 The 700 action is the foundation upon which the Marine Corps has been building its issued sniper rifles since the late 60’s. The Army was a little late to the game, picking up the Model 700 based M-24 in the late 80’s, which is still issued today. It’s hard to demonstrate a more decisive mastery of the bolt-action precision rifle than the production of two branches of service sniper rifles for a combined six decades.

Like any soldier, the Model 700 will one day retire after a long and distinguished career. The folks at Remington have used the time and experience of the very successful Model 700 to develop its replacement, the MSR (Modular Sniper Rifle). The MSR incorporates several decades of experience in manufacturing with the input of seasoned military snipers to create a rifle unlike any that have ever been issued before. The MSR is more adaptable, sustainable and manageable than any other rifle currently available.

The heart of Remington’s new rifle is the titanium triangular-shaped action. The bolt reflects an entirely new direction from Remington and a commitment to offer more than just a re-worked Model 700. Instead of just offering the traditional un-fluted round bolt that they’ve manufactured for so many years, Remington milled a small groove that travels the length of the bolt and mates up with lug at the rear of the receiver. Groove and lug work together to ensure that the bolt consistently rides down the centerline axis of the action. Rapidly firing the rifle, the lug and groove allow the shooter to smoothly cycle the action without any fear of it binding up mid-cycle. Long actions have always been problematic during rapid bolt manipulation, but Remington has apparently found the cure. Remington also chose to manufacture a titanium action for its added strength and rigidity, not to mention a substantial weight savings over conventional steel.

The action has the unique capability of hosting a bolt with interchangeable bolt heads. When combined with the interchangeable barrels, this allows the current rifle to chamber and fire 7.62x51mm, .300 Win Mag and .338 Lapua Mag. The three bolt heads also allow the user to chamber and barrel a wide variety of other cartridges. Remington recognizes this potential in the MSR and has discussed the possibility of chambering dozens of cartridges in one rifle. For example, the bolt head for the 7.62mm is sized to take a .473 in case head. Theoretically, the MSR owner could purchase barrels from Remington chambered in .243 Win, .260 Rem, 7mm-08 Rem, and .338 Federal. Once the barrel extension is attached and the rifle assembled, the magazine and bolt will work with all of the above to reliably chamber and fire those additional cartridges. And those are just the ones based on the 7.62mm case and bolt head.

The .300 Win Mag bolt head and magazine allow for additional chamberings in .264 Win Mag, .270 Weatherby Mag and 7mm Weatherby Mag. Finally, the .338 Lapua Mag can also be chambered in .416 Rigby and .460 Weatherby Mag. All of the chamberings listed here would also be capable of using one of Remington’s provided detachable box magazines, but would need inserts of various lengths to ensure reliable feeding.

Remington has only discussed the idea of more calibers for the rifle, but it would seem easy enough with a little help from their custom shop to have all of the above chamberings in one rifle. Remington has also indicated the possibility of producing a smaller version of the MSR that would chamber calibers between 5.56mm and .300 Win Mag. Such a rifle would be intended for the civilian market and would offer a wider selection of those bracketed calibers than the current MSR.

The MSR is one of the most configurable and user-friendly rifles currently produced. The rifle offers the shooter a variety of different calibers without requiring the purchase of additional optics and support equipment necessary for each when owning multiple rifles. With just one scope and sling, the MSR offers the shooter the ability to fire several different calibers based on the availability of ammunition and desired terminal ballistics.

Unique Features
Another prominent feature of the MSR is the chassis. It has a tubular forend and side-folding stock and represents one of the most comfortable systems I’ve had the pleasure to shoulder. The tubular forend can be changed to a variety of different lengths and has several attachment points for Mil-Std-1913 rails, enabling the shooter to mount lasers and illuminators. There are even channels cut into the chassis for cable management. When we attach lasers or illuminators to our rifles, there is often an issue with the cables that run between the actuator switch and the device itself. The cables hang from the rifle and frequently become entangled with each other and the shooter. Remington cut small channels in the chassis that allow the shooter to tuck the cables into them. There are even small screws to hold the cables in place.

The chassis has an adjustable length of pull and cheek piece. The adjustments allow the rifle to fit a wide variety of body types and shooting styles. The buttstock folds to the working side of the gun and encapsulates the bolt handle. When folded, the rifle is a joy to transport and store.

Remington made another bold design move when they decided to incorporate the recoil lug into the chassis instead of the traditional location, sandwiched between the action and barrel. The recoil lug is part of the bedding block and fits into a groove milled into the titanium action. Instead of the traditional approach of bedding the recoil lug into the stock, a process usually done by hand by persons of varying competence, Remington uses their CNC machines to mill both the chassis’ recoil lug and its corresponding groove in the receiver. This process enables Remington to hold tighter tolerances with recoil lugs than previously possible on production rifles.

Scope & Suppressor
The MSR sports Leupold’s newest offering, a 34mm tubed variable power scope. Leupold’s offering incorporates all of the latest technological and operational advances uncovered in the last ten years. The new scope is offered in 6.5-20 power with a Horus H-27 reticle on the first focal plane and a 50mm objective lens. The first focal plane enables the shooter to mill targets effectively regardless of what magnification level the scope is set at, a convenient feature when engaging moving targets at closer distances. The scope also has 1/10th mil adjustments and locking turrets. There are 40 mils of travel in the scope as well as a zero stop feature with two revolutions. A revolution indicator pops up after the first revolution so the shooter always knows the dope on the rifle.

The suppressor with the rifle is Advanced Armament Corporation’s (AAC’s) new Titan QD. Fabricated from titanium and weighing in at a svelte 20 ounces, it is designed for use with .338 caliber bullets but accommodates smaller caliber projectiles as well.

Remington liked the AAC can so much that they recently purchased the company. AAC will continue to operate as they have in the past, only now they will report to Remington’s Military Products Division. In return, AAC will draw off of Remington’s research and development facilities to gain use of Remington’s many manufacturing and production resources.

Shooting Impressions
The MSR is a pleasant rifle to shoot. Making adjustments to the stock was a quick and easy process. The stock has an adjustable cheek rest and length of pull, both were intuitive and easy to adjust. The horizontal surface area near the toe of the stock is perfectly sized for a sand sock or rear bag for those who shoot off a bipod as I did on the range.

The bolt has a short 60-degree throw thanks to the three recoil lugs and required minimal effort to cycle. I give the trigger pull high marks for having an acceptable weight and minimal creep. The magazines slid in and out of the magazine well without difficulty.

The barrel we had for the day of shooting was new and had yet to be broken in. However, this same rifle had on previous occasions averaged 0.3-MOA at 300 meters with the .338 Lapua and 0.5-MOA at 1200 meters with the .300 Win Mag. That was in the hands of Todd Hodnett from Accuracy First. Todd is a well-known instructor in the Special Operations and Marine Corps sniping communities and the most talented rifle marksman I’ve ever known.

The MSR I fired was chambered in .338 Lapua Mag. The rifle generated minimal recoil and posed no difficulties for extended range sessions. The monolithic rail running along the top of the receiver and chassis has a 20-MOA bias that is interchangeable to 40- or 60-MOA. There is no threat of running out of come-ups on your scope should you decide to shoot out to 1500 meters with this rifle.

Final Notes
Remington is focused on initially producing the MSR for the military’s Special Operation Command. The military is currently looking for a new sniper rifle and Remington feels obliged to first take care of the troops before going after the big money of the commercial market. Bravo. Remington will offer the MSR you see here to civilians in the future. There are also plans to offer a smaller version designed for calibers between 5.56mm and .300 Win Mag exclusively to the civilian market. The MSR is a mighty fine rifle and I look forward to soon seeing both at gun shops everywhere. 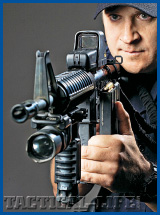