by Brian P. Haughton
in Uncategorized
0

0
SHARES
1
VIEWS
Share on FacebookShare on Twitter
It’s critical for officers to maintain a “warrior mindset” at all times and keep their strong hand ready to draw their weapons. Weapon retention training saves many LEO lives each year.

In September of 2005, Newtown Borough, Pennsylvania, Police Officer Brian Gregg was shot and killed by an assailant when the suspect disarmed his partner of his duty weapon. The suspect also shot Gregg’s partner, wounding him in the chest, and then fled the scene. This assault on two law enforcement officers occurred in the emergency room of a quiet suburban Philadelphia hospital. The suspect was brought to the ER for what some would call a “routine” blood test for a suspected DUI arrest. The suspect was caught a short time later by a local SWAT team while he was hiding in the parking garage of the hospital. He was later tried, sentenced, and currently sits on death row waiting for the call.

This tragedy should be a reminder to all officers to keep an ever-ready mindset while performing their duties, whether they are sipping coffee at the convenience store during a slow moment on the graveyard shift or pulling over a suspect vehicle that was taken in a carjacking. When I began a new assignment as an instructor at the Philadelphia Police Academy, I was pleased to learn of a technique implemented for recruits to start these young men and women thinking about the warrior mentality they will need for their new profession. 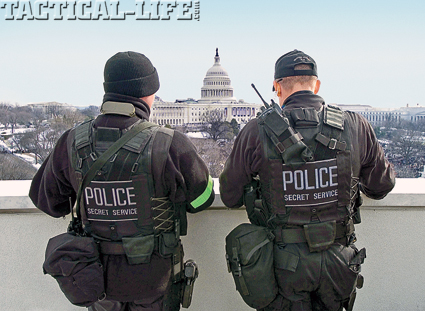 Constant vigilance is necessary to detect threats before they occur. These U.S. Secret Service agents monitor the rooftops during the Presidential Inauguration in Washington D.C. DoD photo

It is a simple method for each recruit: wearing a red sweatband around the wrist of his or her dominant hand, or “strong” hand, that they use for a handgun. From an early start of the police training, this instills a good habit of carrying their backpack or gear bag with their “weak,” non-dominant hand. This goes across the board for other tasks, too, such as opening doors and holding a drink. The idea is for our recruits to carry on these good practices when they start their assignments in patrol. When they approach that 3:00am car stop carrying their flashlight in their weak hand, their gun hand will be free or placed on the holstered weapon—primed to react to any threat.

When I was in the Academy, now almost 20 years ago, we did not wear wristbands like this. To learn this valuable lesson, I had to be corrected as a rookie by an old-timer, who was breaking me in on street operations. This veteran cop watched me exit the coffee shop one cold night holding on to a hot cup of coffee and said in a slightly scolding tone, “What are you doing, kid?”
I replied, “Drinking a coffee.”
He proceeded to tell me that if a confrontation occurs and I needed my sidearm, quick, fast and in a hurry, that drink I was holding with my gun hand might slow me down just a second too long. That hesitation may cause me to lose the fight or fail to effectively respond to the threat. “Keep that gun hand free whenever you can,” he said.

Is it being a little paranoid? Well, to a certain degree you need to be a little paranoid in police work, because the simple fact of life for cops is that there are people in the world that want to kill you, and they will not hesitate to take away your life to keep their freedom and avoid arrest. When you chose this most honorable profession to “protect and serve” and place a badge on your chest, you essentially agreed to place your life on the line, ready to save others. It is definitely a higher calling.

Over the years, I have gained some knowledge of other warrior mindset techniques used in the military and police world. For instance, the U.S. Navy SEALs possess what they call the “fierce friendly” look while on patrol and a “relaxed ready” posture in their duties while not in combat—that confident way you carry yourself. In policing, officers should always be sizing up our possible adversary by observing their body language and movements. Conversely, don’t think for a minute the thugs out on the corner aren’t sizing up you as well and what your body language reads. The criminals are always plotting, asking themselves “Is this cop a pushover?” or “He looked squared away—I won’t mess with him.”

For agents in the U.S. Secret Service charged with protecting the most powerful man in the free world, the President, they have particular mind-setting tools in their training. A major part of their work preparation and mental conditioning consists of going over worst-case scenarios mentally, assessing life or death decisions, asking, “What is going on around me? Is there a threat?” Agents are then synchronized for a quick reaction to prevent a deadly assault on the President.

One of the many defensive tactics taught to our recruits in the gym is a scenario of an attempt to take your sidearm. These drills once again are used to instill that warrior spirit and the necessity to gear up into survival mode when the fight is on—to defend your gun in a confrontation. I recall my SWAT training several years ago, which concluded with a weapon-retention exercise. SWAT school had several opportunities to be exposed to CS gas or zapped by a Taser, training for the possibility of cross-contamination on entry operations or if “Mr. Murphy” comes to visit and you are mistakenly tased on some hectic job.

SWAT members need to know how these less-lethal tools work and, more importantly, what to expect physically after possible exposure. But the most dreaded drill was not getting tased or CS exposure—it was the OC weapon retention exercise! They don’t call Oleoresin Capsicum “hell in a can” for nothing. After a direct hit of scorching hot 2% OC in your face, you then have 60 seconds to keep your blue training gun in your holster as teammates surround you and try to take your weapon. You must fight through the pain and stay alive to keep your weapon.

In the real world, I once chased an armed suspect who dropped his gun after falling to the ground. We then battled in a wrestling match in the middle of a busy city street. Since he lost his gun, as well as being under the influence of cocaine, he thought it wise to attempt to grab my holstered gun. Thankfully, I won that contest, and he was lucky not to be shot that day due to the arrival of my partner. The FBI has been keeping statistics over the years of law enforcement officers feloniously assaulted and slain in the line of duty and although the numbers are relatively low of victim officers murdered with their own weapon, that threat is always present in this line of work. 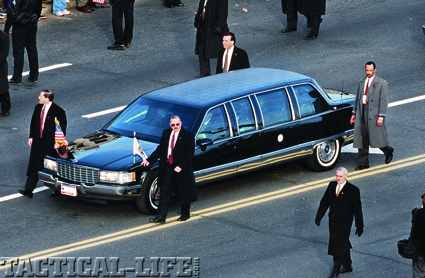 In conclusion, please be aware and ever-ready while out on patrol, never becoming complacent in your duties, assuming this job is unfounded or “this guy is not a danger to me,” etc. The 2011 national statistics of police officers killed in the line of duty are a cautious reminder to us all. Sadly, the numbers are up by 16 percent from last year, for a total of 177 heroes who gave the ultimate sacrifice. Also, for the first time in 13 years, auto accidents are not the number one reason for line of duty deaths; armed confrontations were the top killers last year. Police work is not just a job—it is a warrior’s path we tread. Never forget that.