by Scott R. Gourley
in Uncategorized
0

With more than a decade of combat experience to draw from, U.S. weapons planners have developed a number of upgrades and enhancements for a range of combat weapon systems. Of note among medium machine guns is the development of the M240 “Lima” 7.62mm machine gun. Derived from the reliable and durable M240 “Bravo,” the M240L has addressed user complaints about the Bravo’s weight. With a titanium receiver, shorter barrel and collapsible buttstock, the Lima is 5 pounds lighter than the Bravo, while enhancing tactical vehicle-dismount-and-maneuver operations. The military began fielding the Lima systems in November 2010.

But before that, design engineers at General Dynamics Armament and Technical Products (GDATP) had begun a separate effort to address what they perceived as a capability gap in U.S. battlefield capabilities. Speaking to the May 14–17, 2012 National Defense Industrial Association’s Joint Munitions Conference, Exhibition and Firing Demonstration in Seattle, Washington, David Steimke, GDATP project engineer, recalled, “In 2009 we identified some key problems based on what we had been hearing back from soldiers in warzones. And one of them was lack of range and lethality in the current selection of man-portable weapons.” Steimke continued, “On the contrary, if you provide the range and lethality, that requires a significant overburden to the warfighter with the current selection of heavier weapons. Can we do better for the warfighter? That’s the question we asked. (And it was not just our opinion.) By 2011, the Army had asked industry to help solve specific problems, including overburden, tactical overmatch and maneuverability. Those are recurring themes that keep coming up as you hear more from the warfighter.” 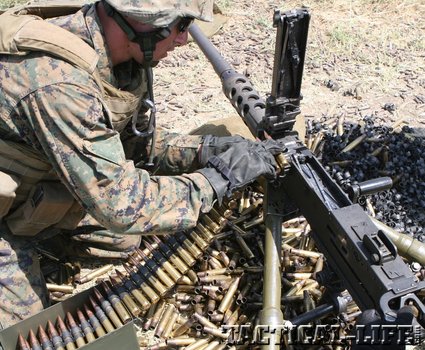 The net result was an internally funded GDATP initiative to understand the types of technologies available to close this capability gap and solve the above problems. “The current state of existing soldier-carried weapons restricts maximum effective range or imposes restrictive weight,” Steimke explained. “You have the 7.62 NATO M-80 round, and on the M240B or M240L, the max effective range is [875 yards] for the ‘B’ or 600 for the ‘Light.’ And the ‘B’ is 33 pounds, including 100 rounds of ammo, while the 240 ‘Light’ is 28.5. The next step up is your .50 cal Browning machine gun: it’s got 1,968 yards max range but it’s a 130-pound weapon.” Steimke continued, “If you’ve got 100 rounds of ammo with an M2 .50 caliber you are approaching 150 to 160 pounds. Yes, you can attack the enemy, but you’d have to be able to carry that amount of weight. Likewise, you can carry an M240B (or even better, an M240 ‘Light’), but you are limited to 875 yards when they are getting engagement ranges out to 1,312 to 1,640 yards.” He surmised, “To get to the max range requires technology of a weapon and ammunition with an M2 range and an M240 weight.”