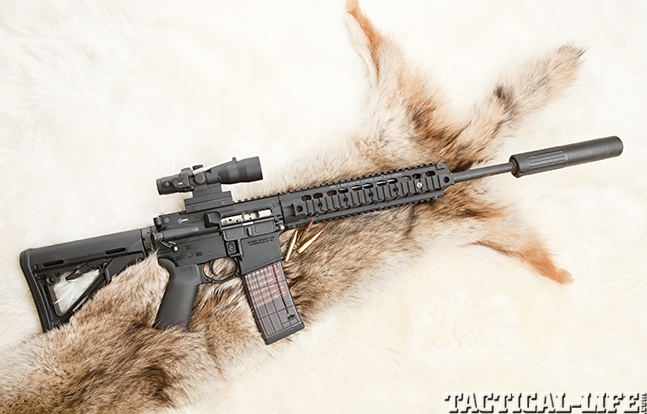 1 of 6
Long-Distance Coyote Control with Advanced Armament’s MPW Carbine
AAC’s 300 Blackout MPW, paired with a Trijicon ACOG, provided the speed and accuracy the author needed to thin coyote numbers in Texas after they had decimated the local deer population. 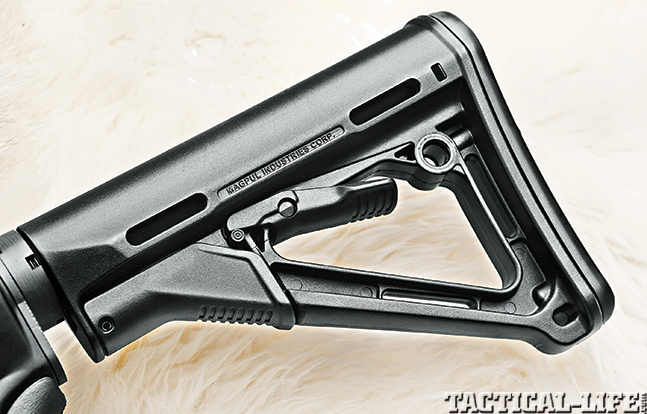 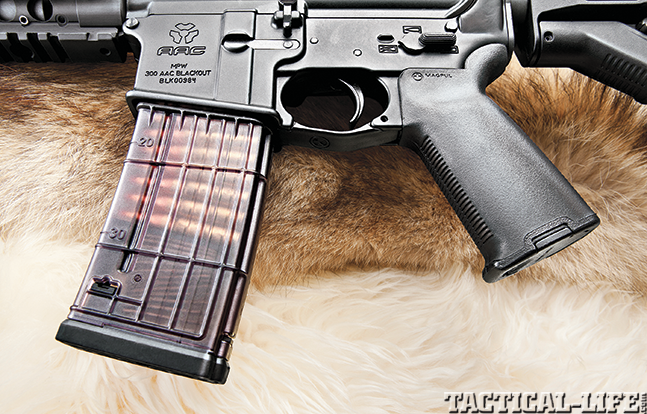 3 of 6
Long-Distance Coyote Control with Advanced Armament’s MPW Carbine
For the hunt, a 30-round Lancer magazine filled with 300 BLK cartridges offered more than enough firepower for taking down coyotes. Also note the Magpul MOE+ pistol grip. 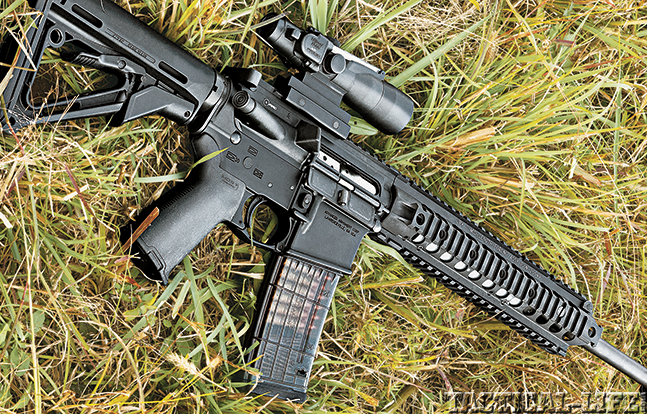 4 of 6
Long-Distance Coyote Control with Advanced Armament’s MPW Carbine
AAC’s 300 Blackout MPW, paired with a Trijicon ACOG, provided the speed and accuracy the author needed to thin coyote numbers in Texas after they had decimated the local deer population. 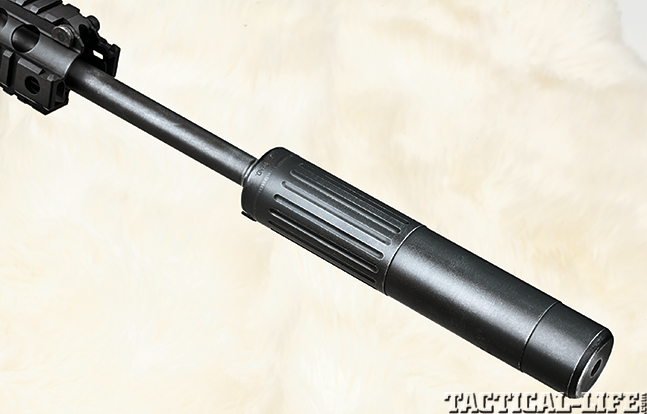 5 of 6
Long-Distance Coyote Control with Advanced Armament’s MPW Carbine
The AAC 762-SDN-6 sound suppressor is the perfect accessory for the MPW carbine, reducing the 300 BLK’s sound signature by 39 decibels. 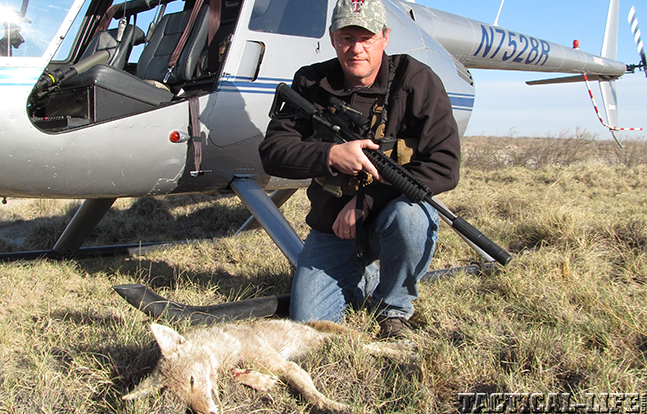 6 of 6
Long-Distance Coyote Control with Advanced Armament’s MPW Carbine
AAC’s 300 Blackout MPW, paired with a Trijicon ACOG, provided the speed and accuracy the author needed to thin coyote numbers in Texas after they had decimated the local deer population. 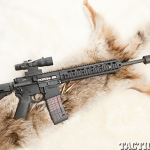 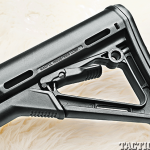 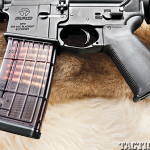 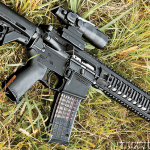 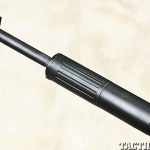 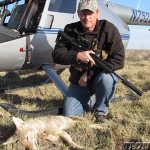 My typical coyote hunt with an AR, or any other rifle or shotgun, starts out by picking a good setup spot and calling them in. With the new Advanced Armament Corporation (AAC) MPW rifle chambered in 300 Blackout, this hunt would be anything but typical.

It was a good time of day to begin a hunt, about 90 minutes before sundown. It was the right place, in West Texas near Brownfield. Things deviated from the norm when I buckled my seat belt and the pilot of the four-seat chopper powered up and blew dust everywhere. We were on a population control mission to help eradicate fawn-eating coyotes that had decimated the local mule deer and whitetail populations.

A 5-mile flight to a broad expanse of sand hills put us on alert for any movement or shadows that looked out of place. Pilot Kyle Lange scanned one side while I watched from the left-hand seat. Suddenly, I spied a fat female coyote at the same time Kyle spotted the male of the breeding pair. Since the stiff 14-mph wind favored a turn toward the female, we broke off as the pair tried to put distance between themselves and the chopper. The female ran through the brush alongside an old barbed-wire fence as we closed the distance and slowed to equal her ground speed. At 40 yards, I picked her up in the Trijicon ACOG’s reticle and waited for the center dot to find fur. At the precise moment of their intersection, I broke the sear of the rifle’s trigger and watched her roll, flipping tail over head and come to an abrupt stop. My 110-grain Barnes handload was devastating. “Good shot,” Lange said, “but it’s all downhill from there.”

Shots at running game are a challenge for any rifleman, but doing it while moving at high speed from any number of angles ratchets up the difficulty several notches. Then, add innumerable lead calculations, and the task gets mind-boggling. As we clawed for altitude after the first kill to spot the fleeing male, we finally regained visual contact. As easy as I made the first shot look, this one would be at the other end of the spectrum. The coyote was running across the wind and angling toward the downwind direction, which made flying a bit tricky for Kyle. Just as we closed the gap and I was drawing a bead on the running coyote, it dug in, skidded to a halt and ran back under the chopper. We circled back into the wind and found the coyote again running flat out for the county line. We closed the gap again, only to have it slam on the brakes and run back under the chopper just as I was ready to pull the trigger. It wasn’t the last time the sly dog pulled this trick. Five times in all, it slid to a halt and did a 180, seemingly accustomed to avoiding airborne pursuits.

Finally, the tricky male got tired and stood his ground, snarling and jumping at the chopper. The only problem was that he stayed behind a mesquite bush. Since I wasn’t having much luck getting an open shot, I started pouring 300 Blackout rounds through the bush. After about the ninth round, I connected. We circled, and I put a final round through his boiler room. Over the next several minutes, we jumped three other coyotes, and I killed them all with one or two rounds each.

Over the next couple of days of ’copter coyote control, I took 40 coyotes with AAC’s MPW 300 Blackout rifle. In short, this hunt gave me ample opportunity to evaluate the rifle’s effectiveness on killing coyotes. When I got the timing right and broke the sear at the perfect moment, the .30-caliber round was quite effective.

AAC’s MPW (Multi-Purpose Weapon) in 300 Blackout is direct-impingement carbine that first appears like most other AR-15 clones, but when you look closely, some important features distinguish the MPW as a better-than-average modern sporting rifle. The carbine’s upper and lower receivers are matched, and the 16-inch-barreled upper is designed for use with a carbine receiver extension, a standard GI buffer spring and a carbine buffer.

The MPW is packed with premium-quality components. The 1-in-7-inch-twist barrel is nitrided for extreme corrosion resistance and hardness, which translates to a longer barrel life, and testing revealed that it outperforms chrome-lined barrels for longevity without the potential impediments to accuracy. The muzzle features 5/8×24 threading and includes an AAC 51-tooth Blackout flash suppressor. A Knight’s Armament free-floating URX III handguard helps maintain accuracy while making it easy for shooters to mount accessories.

The bolt carrier group’s nickel-boron coating is very durable and has a lower friction rating than either chrome or nickel-Teflon. The bolt carrier group is also given a base layer of high-phosphorous electroless nickel that ensures a level of extreme corrosion protection absent from other nickel-boron carriers that use a single, thinner layer. The bolt itself is made from Carpenter 158 steel that is phosphated and shot-peened to ensure precise dimensions with no concerns for hydrogen embrittlement in the critical lug area. A special green O-ring that is tested to not bind even at -40 degrees Fahrenheit comes standard. The extractor spring is made from premium, ultra-strong wire and is a low-fatigue design for a longer life. The extractor pin is made from 300-ksi S2 tool steel—not the much weaker S7 more commonly used. Finally, the carrier key is properly staked and sealed with Permatex to prevent gas leakage.

The trigger is a reliable Geissele G2S unit with a crisp break. The lower also has Magpul’s CTR stock and MOE+ grip.

I mounted a 3×30 Trijicon ACOG with a 300 BLK reticle. The reticle features an amber, illuminated crosshair and bullet-drop markings that work equally well with subsonic or supersonic rounds.

The first load I chose was Remington’s 220-grain subsonic ammo, which averaged 1,079 fps. Measured with an Oehler 35P chronograph, the standard deviation was 51 fps, with an extreme spread of 148 fps. On paper, this load’s best five-shot group at 100 yards measured 1.13 inches.

At the other end of the factory load spectrum for this cartridge, Hornady’s 110-grain V-MAX averaged 2,364 fps. The standard deviation was 19 fps, and the extreme spread was 57 fps. This is an excellent coyote round and, at more than twice the speed of a subsonic load, it reduced the required lead for running game.

Since I needed to be prepared to fire hundreds of rounds on this hunt, I cranked up the reloading press and loaded a mixed bag of rounds to try to catch up with speeding coyotes. Since I wasn’t concerned with shooting subsonic loads, I wanted to drive every bullet as fast as possible with the diminutive case.

Accuracy-wise, the best handload consisted of 12.2 grains of H110 powder driving a 208-grain Hornady A-MAX at an average of 1,456 fps, with an extreme spread of 28 fps and a standard deviation of 8 fps. Although my shots would typically be less than 50 yards away at running game, I wanted a comparable measure of accuracy at 100 yards. With the small standard deviation, I wasn’t too surprised to find that this load printed 1-MOA groups, with the best five-shot group measuring 0.96 inches.

A natural accessory with this carbine is AAC’s 7.62-SDN-6 suppressor. I’ve been shooting a .30-caliber AAC Cyclone suppressor for several years, but I wanted to try a more compact can, so I chose the 762-SDN-6. It is ideally suited for the 300 BLK round, with a sound reduction of 39 decibels with this cartridge. In the confines of a chopper, not only did I appreciate the gunfire suppression, but my pilot welcomed it, too. All of my range work and aerial shooting was conducted with the 762-SDN-6 in place.

In just five flights, I harvested 40 coyotes with the 300 Blackout MPW — it was a lot of shooting crammed into a short period of time. This rig functioned beautifully, and I’m sure it will provide many more years of fun shooting with this fantastic round. 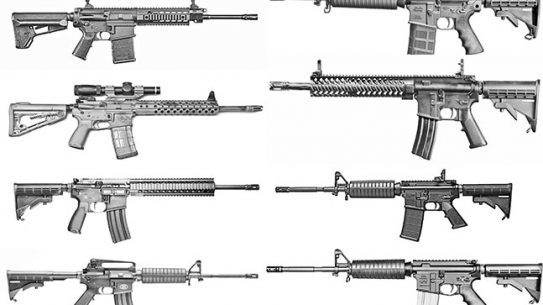 The editors of AR Rifleman have carefully selected 66 of the best semi-automatic modern...