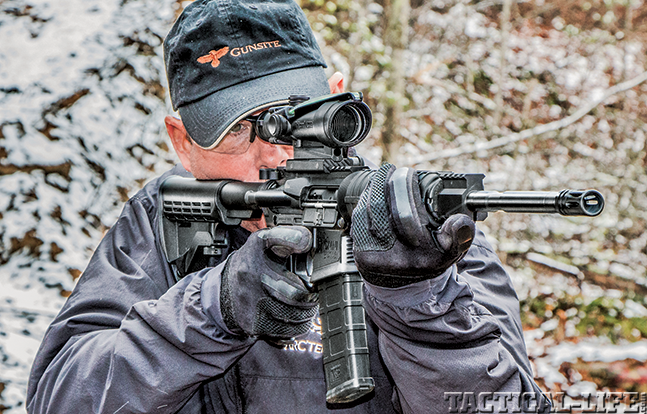 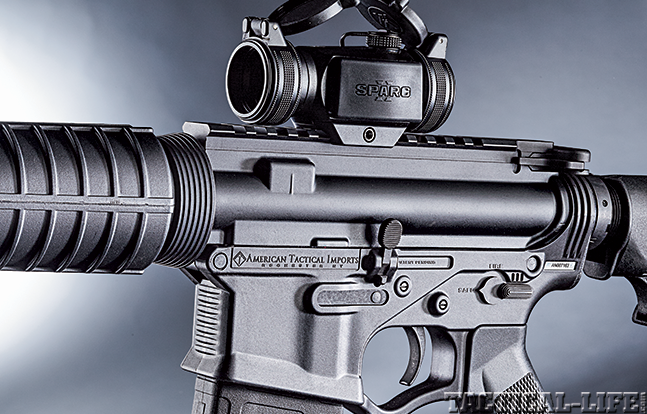 2 of 5
Gun Review: American Tactical’s 5.56 Omni Hybrid
The lower receiver (pictured) features a flared magazine well and an enlarged triggerguard, while the upper comes with M4-style handguards and a railed gas block that can accommodate a front sight. 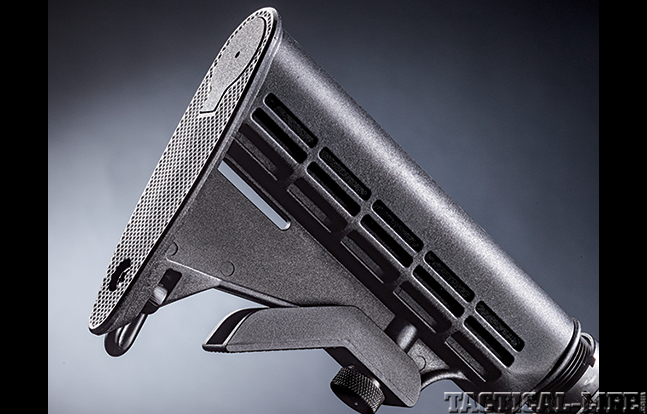 3 of 5
Gun Review: American Tactical’s 5.56 Omni Hybrid
AT outfits the rifle with a polymer buttstock that can be adjusted to six different length-of-pull positions. 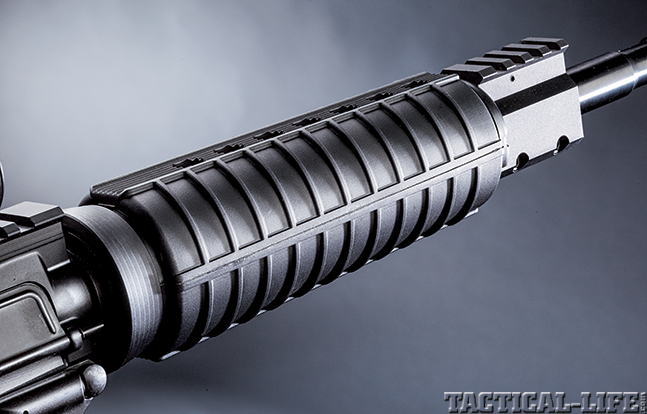 4 of 5
Gun Review: American Tactical’s 5.56 Omni Hybrid
The lower receiver features a flared magazine well and an enlarged triggerguard, while the upper (pictured) comes with M4-style handguards and a railed gas block that can accommodate a front sight. 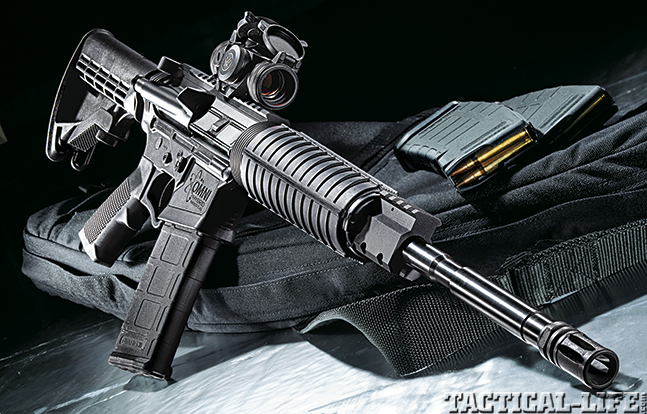 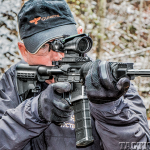 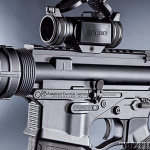 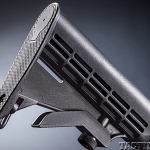 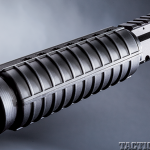 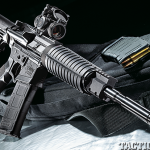 It was only a matter of time  until manufacturers imparted the design and engineering behind the Glock into what has become the most popular firearm on the continent.

The heart and soul of the American Tactical (AT) Omni Hybrid is its lower, which is made of polymer and steel. As with the Glock, this receiver is reinforced with a steel insert for strength and molded in a polymer/fiberglass blend for reduced weight and cost. A stripped AT Omni Hybrid receiver retails for $59.95 and weighs 8 ounces. By comparison, aluminum lower receivers will sell for around twice as much and, depending on the manufacturer, weigh an ounce or two more. With the steel insert at the rear of the AT Omni Hybrid lower receiver, there’s not a great deal of weight savings; the real advantage to the consumer is about $50 extra in their pocket.

AT provided one of its complete Omni Hybrid rifles for testing. The all-black rifle features a 16-inch, M4-contour barrel with a 1-in-7-inch twist rate
and a standard A2-style flash suppressor. The upper receiver sports an integral top Picatinny rail and so does the gas block, which completes the carbine-length direct-impingement gas system. The Omni Hybrid also came with mil-spec handguards and a six-position-collapsible buttstock. Commonly found AR furniture, such as the forward assist and ejection port dust cover, were present as well.

“The heart and soul of the AT Omni Hybrid is its lower receiver, which is made of polymer and steel.”

With the AT Omni Hybrid, the only real departure from any other M4-like AR-15 is the steel-infused lower receiver. And visually, the only real noticeable differences in it and common aluminum lower receivers are the larger and molded in triggerguard and magazine well opening. Aside from that, you’d have to pick the carbine up for close examination to determine that it was indeed built upon a polymer lower receiver.

And even then, all the controls are in the exact same place; the AT Omni Hybrid lower is compatible with any aftermarket component that will work with other mil-spec AR-15 lowers.

We could go on endlessly about the pros and cons of a polymer lower versus an aluminum lower and, much like the debate that continues to rage on with regard to the Glock, we would not find the answer. Keep in mind that polymer stocks have been widely accepted on traditional bolt-action and semi-automatic rifles for many years. Yes, the AR-15 is a bit different, but the premise of mounting a barreled action to a polymer stock—the lower—is, in all practical terms, nothing new.

I figured the best way to test the AT Omni Hybrid carbine was to shoot it, and shoot it a lot. So, that’s what I did. First I zeroed a Trijicon ACOG at 50 yards and then began to hammer steel targets until I’d run through 250 rounds of ammunition. The first thing I noticed was how the trigger was a bit mushy like a Glock trigger, and that it broke at between 5.5 and 6 pounds.

While I was whacking the steel the rifle seemed to be shooting well, so I was excited to put it on the bench to see how an AR with a suggested retail price of $644.95 would shoot. The first load I tested was CorBon’s 55-grain Urban Response load. This is a great load for personal and home protection because it delivers massive tissue damage and limits overpenetration concerns. I’ve also found it to be accurate in every 5.56mm NATO rifle I’ve tested it in. The AT Omni Hybrid was no exception. Five 5-shot groups at 100 yards averaged 1.3 inches with a best five-shot group measuring 0.81 inches.

The next load tested was Hornady’s 75-grain, 5.56mm BTHP load. (The AT Omni Hybrid has a 1-in-7-inch-twist barrel, so it should have easily stabilized this load.) The first two shots using this ammunition were 7 inches apart. The next three shots opened the group to almost 11 inches. Somewhat flabbergasted I walked downrange to see if the bullets were keyholing in the target. This would have signaled that they were not stabilized, but the holes were perfectly round. The next guess was the scope or mounts—could they have let go?

I checked the mounts and looked over the Nightforce Compact 2.5-10X riflescope and could not see anything odd. So, thinking that I could have had a bad time at the bench, I fired five more shots. That group was better, but only by an inch or so. Somewhat stunned that the rifle could not shoot this load accurately, I switched back to the 55-grain CorBon load and fired a five-shot group that measured 1.09 inches. I contacted AT and explained the problems, and the company advised me to return the carbine for examination and rushed a new rifle out to me.

With the second test rifle, the wide gap in performance between the different loads did not exist, and I also fired a total of 200 rounds through the rifle without a single stoppage or problem. Interestingly, the second rifle liked the CorBon loads just as much as the first rifle and after bench-testing that load and four others, the average for five 5-shot groups with all five loads was 2.82 inches. For a very light and very affordable AR-15, this is acceptable, particularly when you consider the CorBon loads were shooting right at the 1-MOA mark.

If you like the idea of polymer firearms and if you also like the idea of an AR that is not very heavy, you ought to take a look at the AT Omni Hybrid. It tips the scales at 6.25 pounds unloaded, which might make it perfect for a smaller-statured shooter with limited arm strength. Add an EOTech MRDS and a five-round magazine and the total rifle weight will only be around 7 pounds—that should be considered light, if not featherweight, in anyone’s book.

What about the issues I encountered with the first test rifle? While some readers might assume that gun writers get handpicked and tuned weapons to test, that’s not the case. Generally, they are pulled of the line and shipped out. Just as consumers sometimes find a problem with a product, writers will find an issue with a gun. I’ve received rifles from other companies that were missing parts or that would not even go bang. Ford and Chevy make mistakes, and so do gun companies sometimes. The replacement rifle ran perfectly and if the swift customer service demonstrated by AT with regard to this issue is an example of what you can expect if you have a problem, that’s good news! 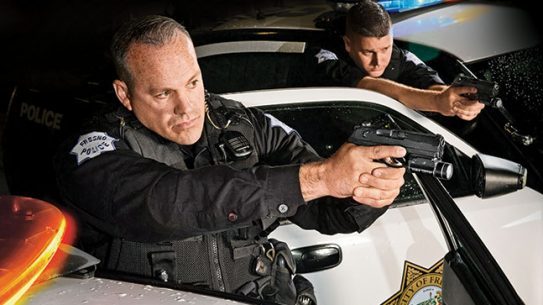 Filled with cutting-edge pistols and revolvers, this list of handguns is built for primary...