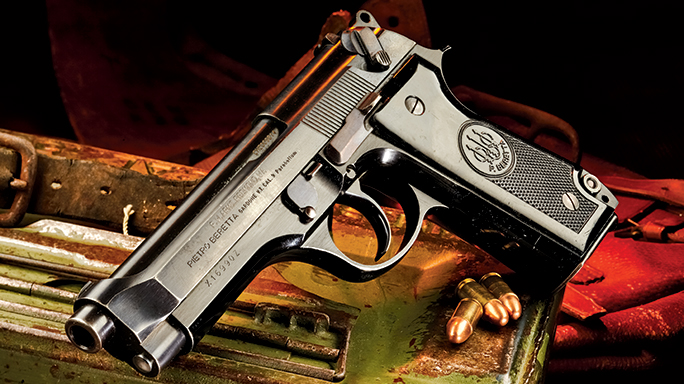 1 of 5
Photo by Steve Woods
Gun Review: Beretta’s Rare 92S 9mm Pistol
The 92S is an interesting variant of the classic Model 92 series featuring a non-ambidextrous, slide-mounted safety and a unique magazine release located at the rear base of the left grip panel. 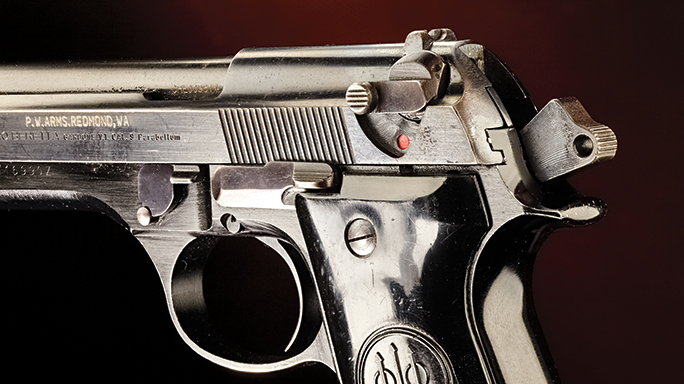 2 of 5
Photo by Steve Woods
Gun Review: Beretta’s Rare 92S 9mm Pistol
The non-ambidextrous safety on the slide of the 92S is lower profile than those of current-production 92 pistols. 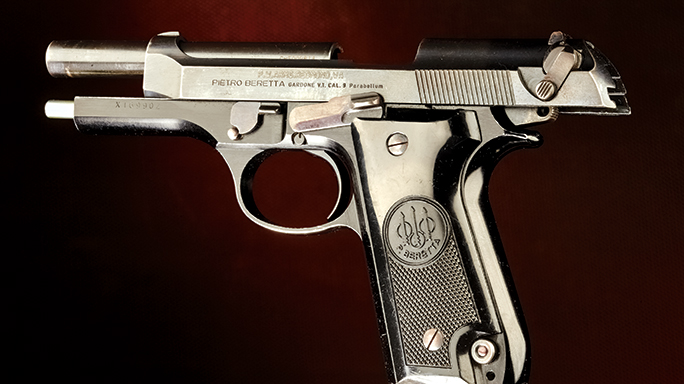 3 of 5
Photo by Steve Woods
Gun Review: Beretta’s Rare 92S 9mm Pistol
The locking system of the 92 is similar to that of the Walther P.38—the barrel remains in horizontal alignment with the sights while the action cycles. 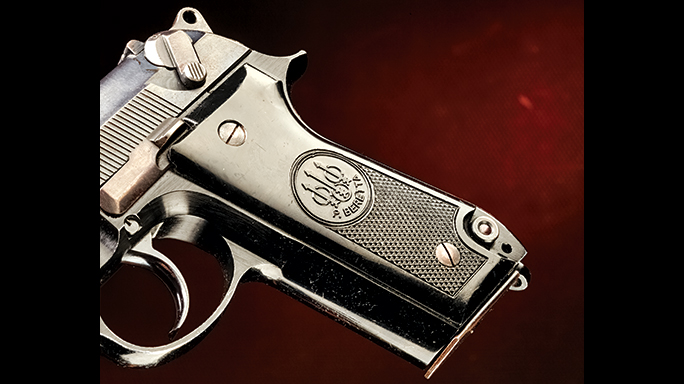 4 of 5
Photo by Steve Woods
Gun Review: Beretta’s Rare 92S 9mm Pistol
An immediate visual giveaway of the Beretta 92S’ unique configuration is the magazine release button, which is located near the rear base of the grip. 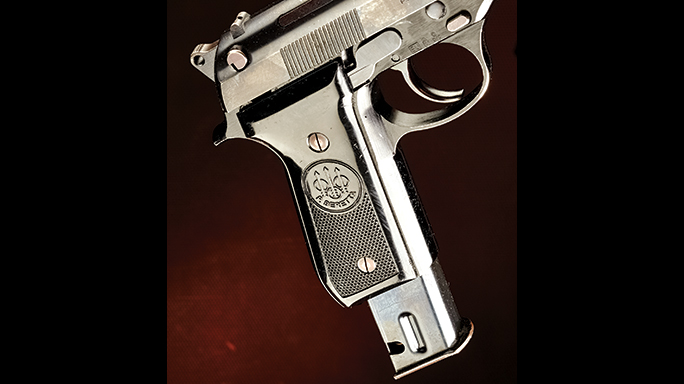 5 of 5
Photo by Steve Woods
Gun Review: Beretta’s Rare 92S 9mm Pistol
Due to the unique location of the magazine release, the pistol’s magazine features a cutout on its lower right side. 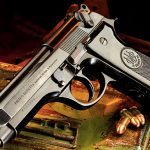 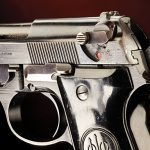 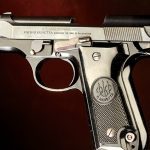 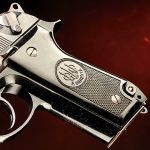 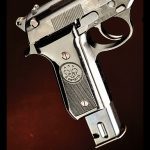 The Beretta 92 series is an undeniable classic, and its intriguing story goes back much further than simply its adoption by the U.S. military in 1985. In fact, the 92 has a lineage that goes back directly to 1951 and the introduction of Beretta’s Model 951. While Beretta had an extensive line of popular and effective small-caliber pistols, there was nothing in its line that would fit the role of a large, duty-style combat pistol. The 951 was developed as an answer to this situation and was chambered for the 9x19mm (9mm) cartridge.

The single-action (SA) 9mm 951 bore many hallmark features of Beretta pistols—most notably its open-slide design. To address the more powerful 9mm chambering, the production model of the 951 featured a modified Walther P.38-style locking system in which a swinging block located under the barrel locks into recesses cut into the slide. Unlike the Browning-style link system where the barrel swings downward out of engagement with the slide during cycling, the barrel of the 951 remains in horizontal alignment with the target during the entire recoil cycle. This is the system you see in modern Beretta 92 pistols through to today.

The 951 proved to be an unquestionable success with it being adopted by elements of the Italian military as well as the military services of Egypt and Israel, to name just a few. However, while unquestionably an advanced and capable gun at the time of its appearance in the 1950s, by the 1970s Beretta began to look at updating the design. The 951’s SA operation and single-column magazine were becoming a bit dated and Beretta wanted to incorporate a double-action (DA) trigger system and a double-column magazine, among other enhancements. To address this, Beretta’s engineers took a fresh look at the 951 design.

The result of this effort was the Model 92, a large-framed pistol in 9mm introduced in 1976 that shared a lot of visual cues with the 951, but featured numerous enhancements and updates. It incorporated increased ammunition capacity through the use of a double-column magazine and the application of a double-action/single-action (DA/SA) system of trigger operation. And, at the time of its introduction, this was a revolutionary combination of features (trail-blazed by the equally influential Czech CZ 75 series).

Externally, the new Model 92 featured classic Beretta lines—namely a gracefully curved and shaped grip area and the open-topped slide design for which the company was known. Controls of the earliest Model 92 pistols consisted of a non-ambidextrous, frame-mounted safety similar in location and design to that of the 1911. The slide release was equally traditional in its location and design. However, the magazine release’s location was similar to that of the 951 (and many other earlier Beretta designs, excluding, of course, the Models 81 and 84 in .32 ACP and .380 ACP respectively, which featured DA/SA triggers, double-column magazines and telegraphed what was to come with the new Model 92).

The 92’s magazine release was located at the rear base of the left-side grip panel. While this location was common on many of Beretta’s pistols, it is unique to say the least to many American shooters. Rather than using the thumb of the shooting hand to operate the magazine release behind the triggerguard, on the 92S you would be best off bringing up your support hand and using its thumb to press the release while cupping that hand around the magazine to catch it as it is released (or let it drop free if so desired).

The 92 represented the beginning of what would become one of the most popular and well-known pistol designs of the world. Despite its low-profile sights, wooden grip panels, rounded triggerguard and frame-mounted safety, anyone looking at it today would immediately recognize its familial connection with any contemporary 92-based pistol. And, as the years passed, Beretta would update and modify the design further.

The first significant change to the 92 platform came shortly thereafter with the 92S, an update that was related to the design of the safety. On the 92S, the safety was removed from the frame and moved up to a slide-mounted location. The single-sided, non-ambidextrous safety also incorporated a decocking function. When swept down, the hammer would drop, but it would be prevented from engaging the firing pin assembly. Apart from the new safety, the 92S was a twin of the earlier 92—down to the uniquely located magazine release.

While checking out the options on the surplus market, I happened upon a Southern Ohio Gun advertisement for original 92S pistols in excellent condition. Needless to say, I jumped at the chance to get one and put in an order immediately. The pistols were described as being “military and state police” pistols from an arsenal in Italy. An inquiry to Beretta regarding the lineage of the pistol I purchased resulted in some intriguing information from Jarno Antonelli, a defence and law enforcement communication specialist with the Beretta marketing department in Italy.

“It was in 1975 when the Italian National Police [Corpo delle Guardie di Pubblica Sicurezza, at that time and until 1982 a military institution] decided to adopt a new pistol in order to standardize its weapons fleet,” he explained. “The situation at that time was a bit confused as the majority of police units were equipped with the World War II-era Beretta 34 in .380, supplied to the Italian Police until 1967. In addition, some units were equipped with the more powerful 9x19mm Beretta Model 1951, a single action with a falling block locking mechanism.”

The Model 92 effectively and capably addressed the requirements of the Italian National Police. However, the group made some additional design change requests. Antonelli explained, “While the 92 was well accepted, some concerns were raised with the safety arrangements. Therefore, a hammer release lever was introduced to drop the hammer in full safe condition.” He went on to note, “The head of the technical commission of the police at that time was Colonel Sposetti. Jokes were made at that time when the ‘S’ model was introduced that the ‘S’ stood for his name.” The police granted the first contract for the pistol to Beretta in 1977.

In regards to the pistol I bought, Mr. Antonelli did some further research and advised me that he had found “that 92S pistols had been sold in June 2014 by Beretta to a sister company in Switzerland. They were old Model 92S pistols that originally belonged to the Ministry of Interior in Italy.” Although he could not access the serial-number field to verify, it seems like a reasonable assumption this was my pistol’s source.

I was very impressed with the pistol as soon as I took it out of the box. As compared the matte black finish of current 92 Berettas available, this pistol features a high-polish blue on the steel parts and a matching gloss anodized black on the alloy frame. I also noted the early-era-style rounded triggerguard (as opposed the squared-off style on most current 92s). One area where this older pistol is at a loss compared to its younger brethren is in its sights. They are plain, black and low profile, with the front sight blade machined into the slide. As compared to modern-day sights, these are a bit hard to pick up.

I have always been a fan of the 92 pistol’s ergonomics, and the 92S was no disappointment. For me, the guns simply just point “right,” as though they are an extension of my hand. As an interesting side note, the unique magazine release location necessitates a corresponding cutout on the lower right-hand side of the magazine body. Need a spare magazine for your 92S? No worries, Beretta still cuts this notch into all its current 92 magazines, making them backwards compatible with earlier models.

Needless to say, I was very happy to be able to add this 92S to my personal collection. For more information on the Model 92 series, visit beretta.com. 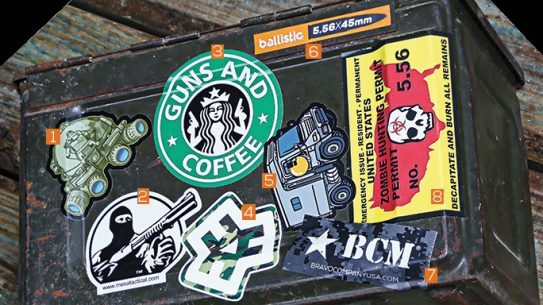 8 Stickers & Decals For Your Firearms, Gear

Looking to liven up your gear? These eight tactical stickers and decals from companies...