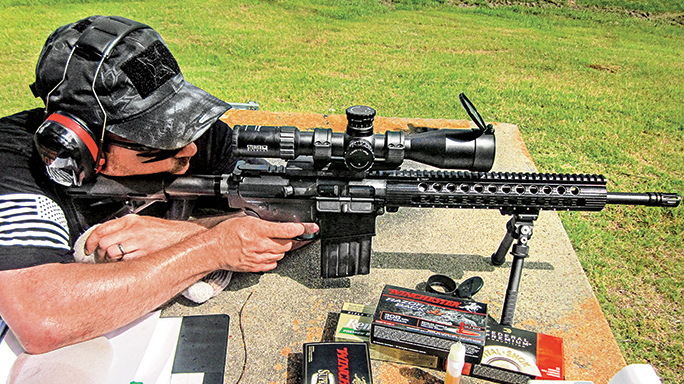 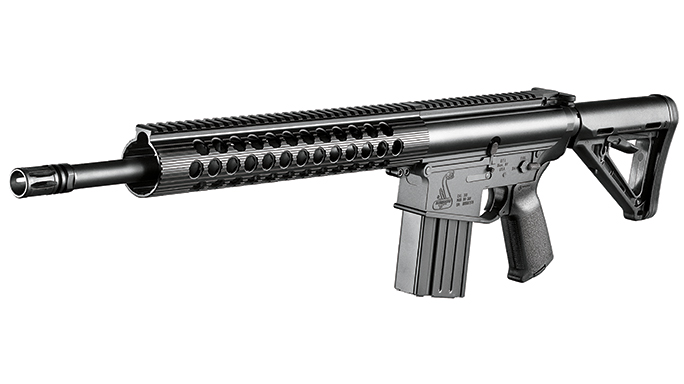 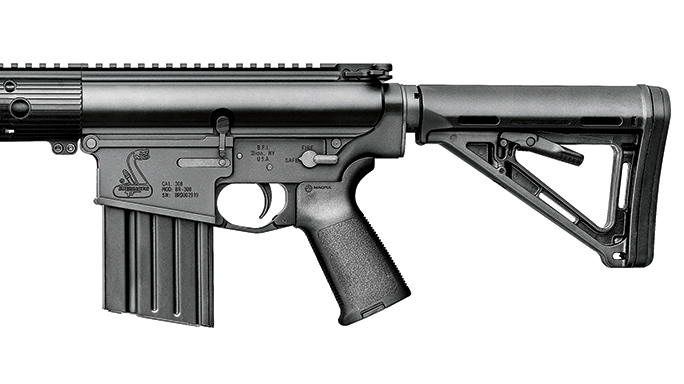 3 of 3
Gun Review: Bushmaster MOE Enhanced ORC in 7.62mm
The beefy receivers immediately show that this is no run-of-the-mill 5.56mm, but a powerful 7.62mm AR. 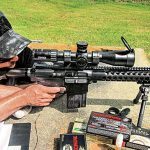 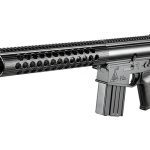 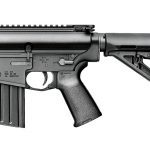 I love the AR-15 platform, and I own a lot of different rifles that fall within that category. However, my biggest critique of it has always been the fact that the 5.56mm NATO round is, well, in my opinion a little anemic.

Some people call it a pipsqueak or mouse round, and others say it is a glorified pistol caliber. Be that as it may, it works well for the role it fills as an entry weapon and tactical patrol gun among its other duties. But I still long for a gun with a bit more power behind it.

The 7.62mm NATO has long been a favorite of both military and police personnel. Due to longevity and popularity, there are tons of different types of rounds to choose from, and they are far less expensive than some of the modern, exotic calibers that tout how much better they perform. The fact is that the 7.62mm NATO has plenty of penetration and knockdown power. And a tactical rifle like the Bushmaster MOE Enhanced ORC (Optics-Ready Carbine) in this round is a great option.

Bushmaster, founded in 1973, has long been associated with AR rifles. It is known for supplying accurate and affordable weapons to law enforcement officers, soldiers and civilians alike. The Bushmaster MOE Enhanced ORC is a combination of forged aluminum upper and lower receivers; a 16-inch, 4150 steel, chrome-lined barrel; and some great furniture made by Magpul and Troy. The rifle comes with Magpul’s MOE collapsible stock fitted on a six-position, commercial-diameter buffer tube as well as a Magpul MOE pistol grip. This MOE line is a vast improvement over the mil-spec parts they replace but are still affordable.

The 12.5-inch-long, free-floating, aluminum handguard is Troy’s low-profile Alpha model with proprietary round holes that allow for both heat dissipation and the attachment of Picatinny rails for accessories. I mounted an included 2.5-inch Picatinny rail on the bottom of the tube. First I used it to mount an Atlas bipod, and then a Magpul Angled Foregrip (AFG-2). Later, I mounted a second short rail on the side for a light. A third rail, a little over 4 inches, is also included. A hole for a push-button, quick-detach (QD) sling is positioned at the end of this Picatinny rail. The handguard itself extends past the low-profile gas block, which is hidden inside. This gives you extra real estate for mounting optics, lights, lasers and foregrips. What I like about the longer forend is the ability to extend my support arm farther out and “drive” the rifle from target to target.

There is one feature that generally goes a long way toward improving an AR rifle: a high-quality, free-floating barrel. The Bushmaster MOE Enhanced ORC’s barrel is a 16-inch, 1-in-10-twist, button-cut barrel made from 4150 steel, which is significantly harder than 4140 steel, although the main difference is that it contains a mere 0.1 percent more carbon. Class 4140 steel has long proven itself an excellent metal for gun barrels. However, the U.S. military insists on 4150 because it is harder and therefore will take longer to wear out under hard use. Most manufacturers prefer to use 4140 because their tools will not wear out as quickly as when they use 4150. Using a stronger, harder steel does not make a barrel more or less accurate, but it does show a commitment to quality from the manufacturer. The chrome lining inside the barrel and the chamber helps with corrosion resistance. Chrome is far harder than steel and is not as susceptible to rust.

Unlike most 5.56mm ARs, many 7.62mm AR rifles will not accept a standardized magazine. The most common types of 7.62mm AR magazines are those in the Magpul pattern, and they slowly seem to be becoming the standard. These are the style of magazines that will function in the Bushmaster MOE Enhanced ORC. I did not have any of these on hand during the testing, however, so I stuck with the 20-round steel magazine that came with the test MOE Enhanced ORC.

I am a huge fan of the 7.62mm NATO round due to its availability and its wide variety of bullet choices. Plus, once you shoot a 7.62mm, you realize how much more power you are wielding than a 5.56mm. One of the best features of this Bushmaster rifle is that it doesn’t feel much different from its little brother, the AR-15. The pistol grip is the same size. The stocks are interchangeable. The safety selector, bolt catch and mag release feel exactly the same. The lower receiver is actually over an inch longer than a 5.56mm lower, but the span from the grip to the trigger and each of the controls is identical.

The rifle does not come with sights, and again, its name stands for Optics-Ready Carbine. I have said time and again that I like it when manufacturers do not include sights on the gun. It keeps the price down, and quite frankly, the odds of the included sights being what the end-user really likes are slim. Some patrol officers may opt for simple iron sights. Others will want a red-dot sight. Still others will want a variable-power scope. In all circumstances where a rifle will be used for tactical purposes, I do recommend some type of backup sights be installed in case the red-dot sight or variable-power scope fails. There are lots of choices for backup sights, and I appreciate the fact that Bushmaster does not pretend to know which ones will work best for me.

After a quick cleaning and oiling of the bolt and bolt carrier, I mounted a Steiner 3-15x50mm Military scope on the rifle with a set of Bobro 34mm rings. I can’t remember ever being able to mount a scope faster or easier, and I could not believe how much clearer the glass was in the Steiner scope than in my old rusty, trusty scope that I have been using for years of testing. I felt bad only testing the rifle at 100 yards when the scope and rifle were capable of so much more.

After completing the accuracy testing, I wanted to try out the Bushmaster MOE Enhanced ORC as a tactical rifle for use up close and at varying distances. I mounted a Nightforce 1-4x24mm NXS scope on top with a set of Nightforce 30mm rings. The FC-3G reticle was made to handle the transition from close to far distances. The quick throw lever made magnification quick, and the illuminated reticle kept it crisp and clear against dark targets and dark backgrounds. I sighted in and then set up some targets at different spots on a 200-yard range. Again, I felt like I was doing this rifle and scope package a disservice by not sufficiently challenging it. Man-sized silhouettes were fast to engage and proved easy prey at unknown distances well past 100 yards. The scope acted like a red-dot sight, rolling right up to the 3-yard line and engaging multiple targets while on the move. While the rifle’s recoil and concussion were greater than a 5.56mm’s, I honestly expected to feel it a lot more. Follow-up shots were quick and easy. Bushmaster has done a great job of taming the 7.62mm recoil. I only wished that I had several magazines to try some reload drills.

Whenever someone talks about an AR rifle, they are typically talking about a 5.56mm. However, the AR platform is capable of handling a lot more. The Bushmaster MOE Enhanced ORC demonstrates this. Wearing furniture that is far improved over mil-spec, dependable and yet still affordable, I consider this weapon to be far superior to its 5.56mm counterparts for many tactical applications. While just as accurate, it delivers more foot-pounds of energy and knockdown power while remaining in a familiar and user-friendly platform.

Those who adopt this 7.62mm will be able to utilize it in a number of different roles, and they will find themselves well prepared for a large variety of situations. The 5.56mm certainly fills a niche, but once you experience the power of the 7.62mm, it is hard to go back. 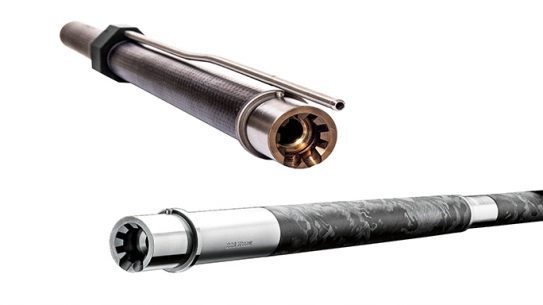 Save weight while maximizing performance with a carbon-fiber-wrapped barrel!