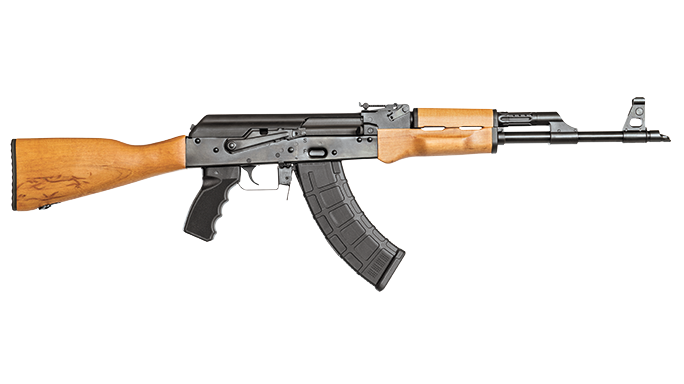 1 of 6
Gun Review: Century Arms’ RAS47 AKM-Pattern Carbine
The RAS47 from Century Arms is an entirely American-made AKM rifle. Rugged, attractive and accurate for its class, the RAS47 is a well-executed contemporary rendition of Comrade Kalashnikov’s classic combat weapon. 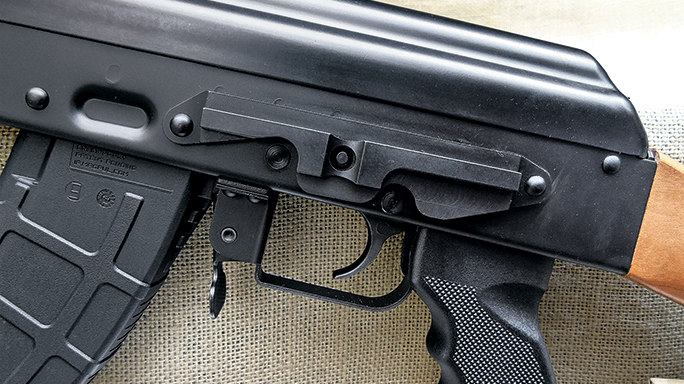 2 of 6
Gun Review: Century Arms’ RAS47 AKM-Pattern Carbine
The ComBloc-standard scope mount is rigidly affixed to the left side of the receiver. Optics and mounting options abound for this mount. 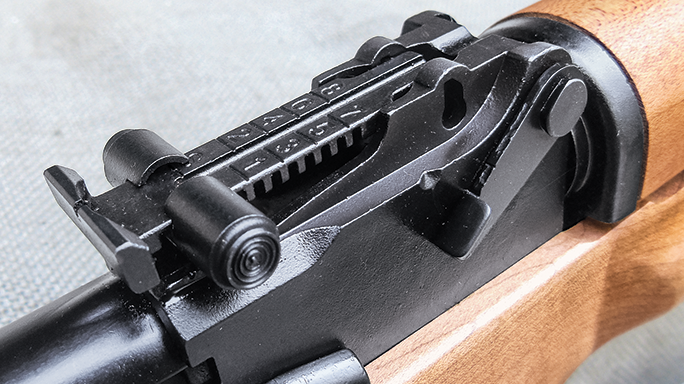 3 of 6
Gun Review: Century Arms’ RAS47 AKM-Pattern Carbine
The standard AK rear sight is optimistically graduated out to 800 meters but, while a relatively archaic design, remains effective. Note the attractive uniform finish on this American-made and freshly manufactured rifle. 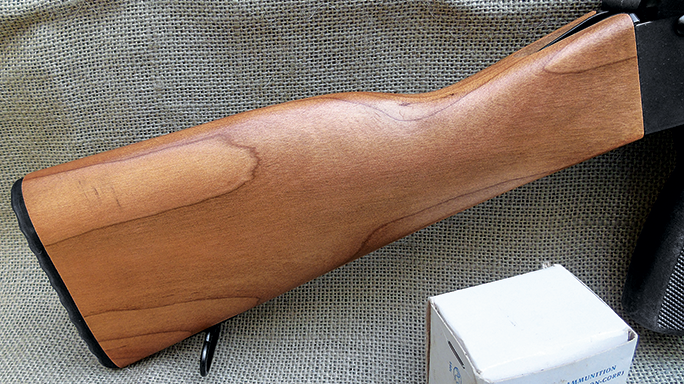 4 of 6
Gun Review: Century Arms’ RAS47 AKM-Pattern Carbine
The stock and forearm on the Century RAS47 are cut from an attractive blonde hardwood that is oil finished. The end result is good looking and effective. Also note the sling loop mounted near the toe of the buttstock for easy access. 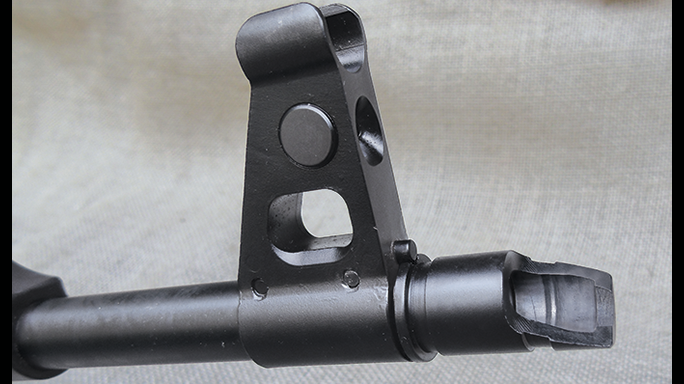 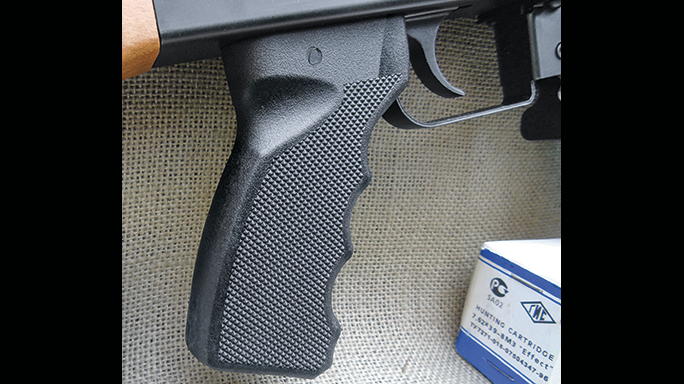 6 of 6
Gun Review: Century Arms’ RAS47 AKM-Pattern Carbine
The grip used on the Century RAS47 is a proprietary design with finger grooves. It is a marked improvement over the military standard. 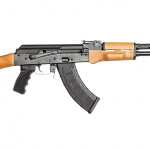 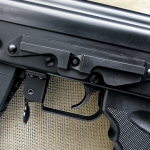 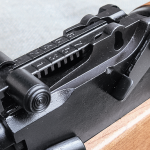 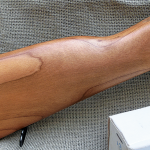 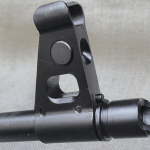 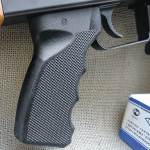 We have all heard the story. A grizzled Soviet tank sergeant, himself of peasant stock and the 17th of 19 children, lies in a field hospital recovering from wounds incurred during the Battle of Bryansk in 1941. To while away the time, a young Mikhail Timofeyevich Kalashnikov contrived weapons with which to defend his motherland from the likes of Nazi invaders.

While some details of the story are disputed, what is indisputable is the effect the Kalashnikov rifle system he developed has had on the world. The reason for the Kalashnikov’s popularity rests not on its ergonomics, as the M16 is light years better, or its vital statistics, as there are lighter options. The Kalashnikov changed the world because it was reliable and simple to operate.

Of approximately 500 million firearms in circulation around the world as of 2004, roughly one in five was a Kalashnikov variant. Kalashnikov rifles are built in at least 33 countries, and I stopped counting at 105 nation-states that use the weapon operationally. The weapon is driven by a long-stroke piston system that is grossly over-designed. Nothing on the planet save perhaps a bayonet runs more reliably.

The new 7.62x39mm RAS47 from Century Arms is an AKM-pattern carbine assembled on this side of the pond from American-made components. RAS47 stands for Red Army Standard. The slant-cut muzzle brake is a perfect copy of the original pioneered on the Russian AKM of the 1950s. Affixed via left-hand 14×1 metric threads, this device is oriented such that muzzle blast is directed up and to the right. On original full-auto AK rifles, the natural tendency of the rifle was to climb up and to the right when wielded right-handed. This simple yet effective muzzle attachment tends to counteract this deleterious bit of physics by imparting an impulse in the opposite direction. The muzzle brake is held in place via a spring-loaded detent.

The front sight is protected by heavy steel ears and is adjustable for windage and elevation via a dedicated tool. The sight ears, like everything else on the gun, are essentially indestructible. The RAS47 we received from Century was nicely zeroed and did not require any sight adjustments.

The barrel is formed from chrome moly 4150 steel and nitride treated for dura-bility and weather resistance. The barrel is not chrome plated, but in my opinion this is a trivial consideration for a civilian rifle. If you were planning to hump the Cambodian jungles operationally, you would have gotten your weapons from sources other than your neighborhood gun store. The 16.5-inch barrel has a twist rate of one turn in every 10 inches.

The gas block includes a standard left-side sling attachment loop. The RAS47 does not include the standard military cleaning rod attachments and bayonet lug underneath the gas block and front sight base. While this might offend the purist looking for a traditional military configuration, it does make for a somewhat sleeker, less-cluttered appearance.

The hardwood furniture on the RAS47 is an attractive, oil-rubbed blonde maple. In addition to being functional, this light-colored wood is nicely marbled and provides an attractive aesthetic contrast to the rest of the weapon. The lower handguard incorporates the finger swells of the original AKM, and any standard surplus or aftermarket AKM stocks or forends should drop right in.

The rear sight is ramp adjustable out to 800 meters. As the 7.62x39mm round drops roughly 42 feet at that range, this is more than a bit optimistic. While not quite as quick as the peep on your AR, the rear sight is readily adjustable and easy to use. The top cover is stamped from thin-gauge sheet steel and the rifle will fire just fine without the cover installed. The rear button on the recoil spring guide incorporates a security tab that effectively prevents the top cover from shaking loose.

The receiver of the RAS47 is pressed from 0.0625-inch steel sheet and nitride treated. The receiver of the RAS47 is formed using the same steel-pressing technology as the 1959-era Russian AKM and includes the standard dimples just above the magazine to help hold the mag in alignment. Heat-treated for optimal performance and long life, the RAS47 bolt carrier incorporates a skeletonized architecture not found on mil-spec AK rifles. While this feature might offer a theoretically faster lock time, practically speaking it just makes for a lighter rifle that is easier to carry. The gas piston is hard chrome plated for durability.

The magazine release has a T-shape not found on military Kalashnikovs that enhances magazine changes with either hand. The size is optimized for easy access without being so large as to catch on stuff. The rifle comes equipped with an enhanced RAK-1 trigger group. Some Kalashnikov triggers can manifest a phenomenon universally referred to as “trigger slap.” This idiosyncrasy can be quite unpleasant under certain circumstances. The RAK-1 trigger group does away with this nuisance completely. The hammer spring is formed from a single heavy strand rather than braided stock.

There is a standard ComBloc-pattern rail riveted to the left side of the receiver, and the popularity of this platform ensures there are more mounts, adapters and optics available than you could ever use. The modified ranch-gate safety includes a square cutout to manually lock the bolt to the rear for servicing and inspection. This is a handy feature that enhances safety on the range and makes it easier to access the entrails of the weapon from the ejection port.

The pistol grip is a proprietary design unique to Century rifles. The grip is -slightly oversized when compared to mil-spec AK rifles, and this allows it to better fit the hands of American shooters. The grip has a nearly square cross section as well as finger grooves to improve purchase when sweaty, rushed or both.

The rear stock trunnion is AKM standard, so aftermarket folding stocks should slip on painlessly. The rear sling swivel is mounted at the toe of the stock, as is the case with AKM rifles. This gives a scant annoying twist to the rifle when carried on the sling, but there are nearly 100 million of the rifles in service and this configuration works just fine in the real world. The buttplate is pressed steel with the same nitride finish. The buttstock does not include a cleaning kit trap.

The RAS47 comes with a one-year manufacturer’s warranty. Having stripped the rifle down to its components and pawed over the whole thing, I found the RAS47 to be a well-executed example of the classic Soviet AKM—robust, utilitarian and functional. I could find no overt blemishes or flaws in the execution of the rifle.

In short, it runs like a Kalashnikov. The Energizer Bunny wishes he were this reliable. The RAS47 is monotonously consistent and packs a heavy downrange punch. There are more accurate rifles, as are there guns that better fit the human form. However, there is nothing—repeat, nothing—which runs more reliably than a well-made AK. Any normal American will not wear this gun out in half a dozen lifetimes.

The safety is clunky, ill placed and a pain, though it’s utterly effective. Magazines need to be rocked into and out of place, but this technique is a training issue that requires no more than a mag or three to master. The RAS47 happily accepted every appropriate box magazine and drum in my not inconsiderate collection without a fuss.

I ran the RAS47 with iron sights and my eyes have half a century’s worth of mileage on them. AK sights are yesterday’s news but I was still pleasantly surprised with the accuracy potential of the rifle. I’ve launched more than my share of 7.62x39mm rounds downrange, and the RAS47 was the most accurate AK I’ve ever fired.

The RAS47 is more than adequate for any realistic tactical application. If your target is the size of a teacup and lurks out at three quarters of a kilometer, you need a different tool. However, if your mission is to secure your home at 3:00 a.m. or defend your business the next time rioters take to the streets, then the RAS47 and half a dozen loaded magazines are as good as it gets.

Unlike many domestically produced AK rifles, every component of this gun is legitimately new. There are no weird recycled parts harvested from demilled beaters discovered at the bottom of some river in Sierra Leone. This is a freshly manufactured rifle that will outlive your great grandchildren while offering all the legendary reliability and downrange effectiveness you have come to expect from the name.

Lastly, Americans made this gun. Americans cut the parts. Americans applied the finish. Americans put it together. All other things being equal, this is more than enough to cinch the deal. The RAS47 is a nice Kalashnikov rifle built completely on this side of the pond. When Russian design meets American industry, the results are impressive indeed. 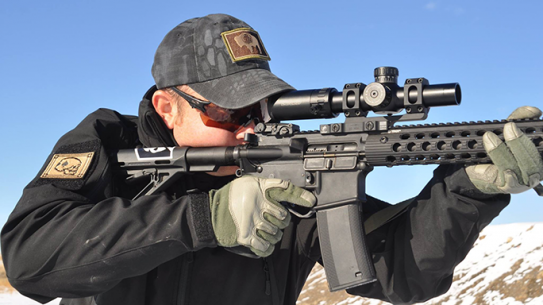 The all new LUCID L7 1-6x24 Rifle Scope is built on an extremely durable...