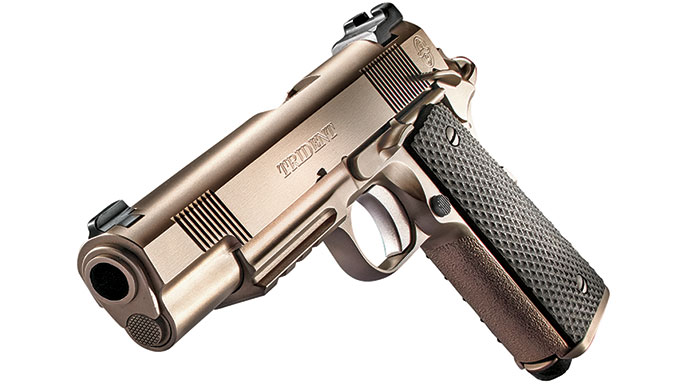 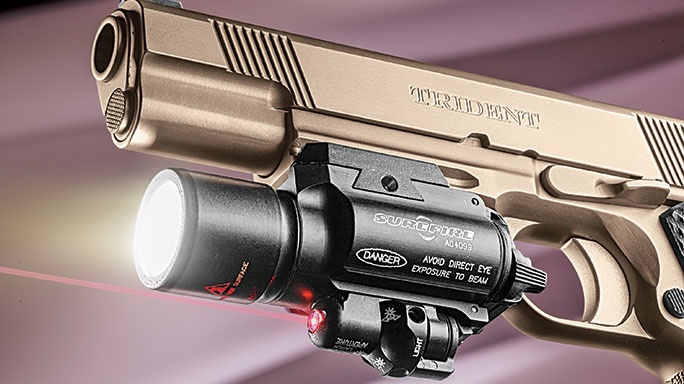 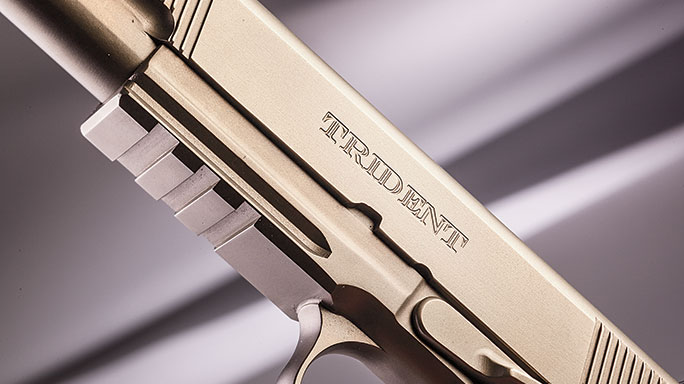 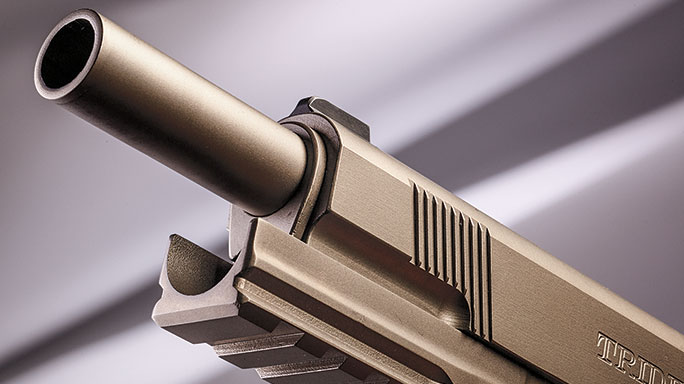 4 of 10
Gun Review: Cylinder & Slide’s Trident II 1911
The Trident II features a 5-inch, match-grade barrel, and the bushing is only finger tight to facilitate tool-less field-stripping—a boon for users who work in harsh conditions. 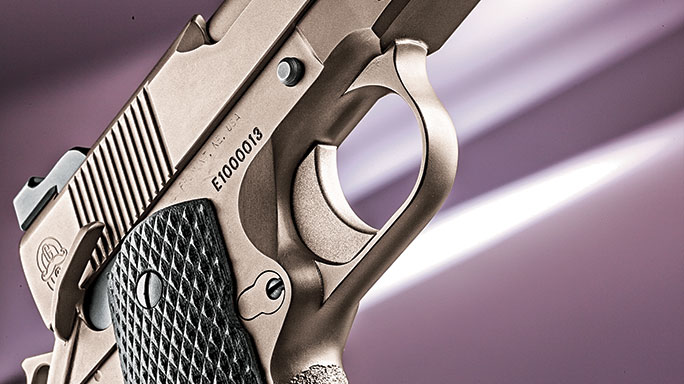 5 of 10
Gun Review: Cylinder & Slide’s Trident II 1911
The Trident II sports an ambidextrous thumb safety. Note the white witness mark indicating that the safety is engaged. A small red dot is visible when the safety is disengaged. 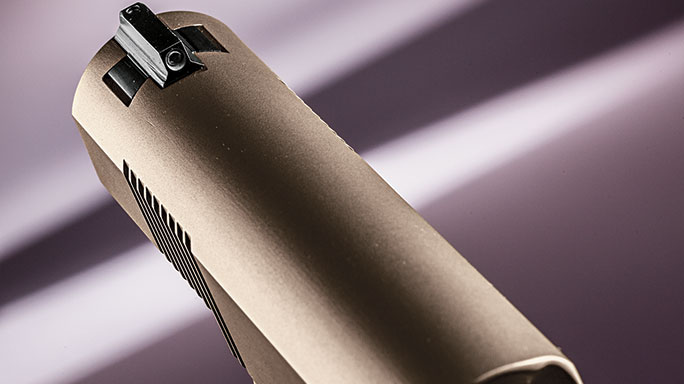 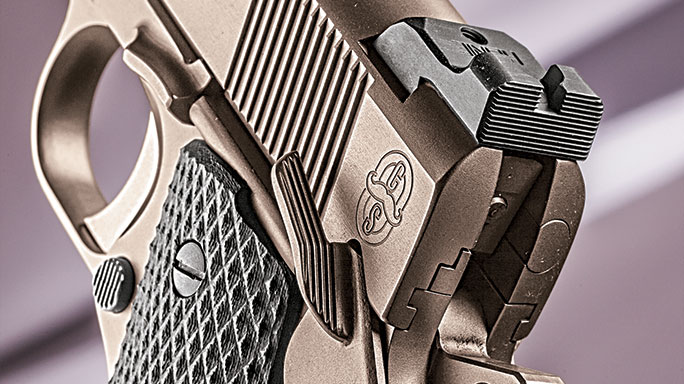 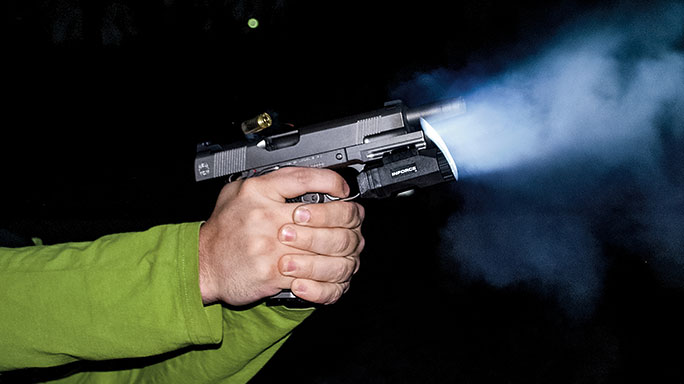 8 of 10
Gun Review: Cylinder & Slide’s Trident II 1911
During testing, the Trident II ran flawlessly, even while shooting at night with an Inforce weapon light mounted on the dust cover rail. 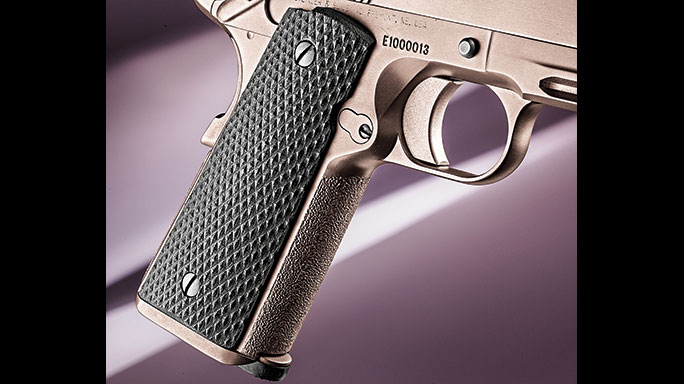 9 of 10
Gun Review: Cylinder & Slide’s Trident II 1911
The pistol comes with G10 grip panels, and the fronstrap and mainspring housing are stippled for a secure grip that won’t trap dirt and debris. 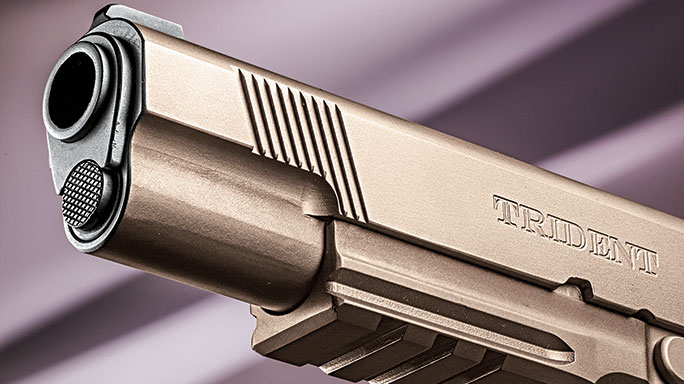 10 of 10
Gun Review: Cylinder & Slide’s Trident II 1911
The Trident II features a 5-inch, match-grade barrel, and the bushing is only finger tight to facilitate tool-less field-stripping—a boon for users who work in harsh conditions. 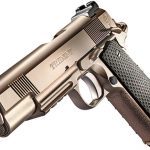 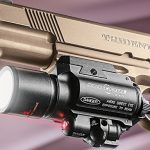 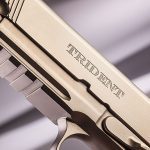 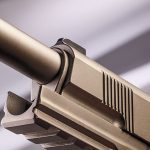 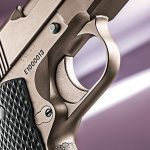 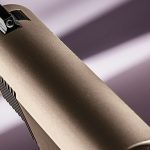 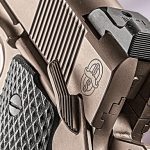 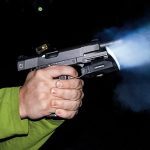 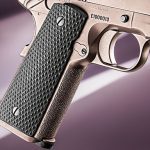 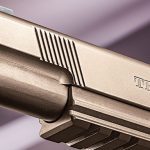 The trident is a three-pronged spear that, in mythology, is associated with both Neptune and Poseidon. It is also at the center of the U.S. Navy Special Warfare insignia, where it is being clutched by a golden eagle, along with an anchor and a cocked flintlock pistol. The insignia represents the core values and mission of the Navy SEAL community. It is also the namesake for a custom 1911 from Cylinder & Slide (C&S).

The story of the C&S Trident II 1911 began in 2009, when Bill Laughridge, founder and president of the company, was teaching a 1911 Custom Pistolsmithing class in Virginia. One of his students was an active-duty SEAL who had an affinity for the 1911. During that school, the student shared his experiences with the fine sand, known as “moon dust,” that plagues equipment in Iraq, Afghanistan and other unnamed locations. Those discussions served as a catalyst that sent Laughridge on a search to find a suitable finish for the 1911 that would not attract sand, dirt and other crud. The discussions also led to a set of specifications for a 1911 that would be reliable in harsh environments with minimum maintenance. To honor all Naval Special Warfare warriors, Laughridge named the pistol the Trident.

It is important to note that the Trident was not earth shattering and had no new, revolutionary features. What made the Trident different was its execution. But, to quote Laughridge, “The devil is in the details.” Each modification and component was carefully evaluated to ensure durability and maximum reliability in the world’s harshest environments. It is this philosophy, supported by real-world experience, that sets the Trident apart from many other 1911s.

The original Tridents utilized a Springfield Armory 1911A1 as a base platform. The Springfield Tridents provided the proof of concept, and C&S built and sold a significant number of pistols. As the Trident project grew, delivery of the base Springfield pistol became an issue. Laughridge made the decision to transition to a fully custom-built pistol using a C&S OEM slide and frame.

Having tested the original Trident for Combat Handguns in 2010, I was especially excited to see the new and improved version. The basic features of the original Trident have been retained, and it is important to note that all of the Trident II’s major components are C&S OEM parts. The critical internal parts are CNC-machined from billet steel or made from forgings and heat-treated throughout. Each part undergoes a rigorous inspection and is subjected to a hardness evaluation using a Rockwell testing machine. Astoundingly, the Trident II contains no MIM parts.

To fully understand the Trident concept, it is necessary to review the major modifications and choice of components. The frame on my test pistol, an A1 variant, features an integral accessory rail that has been trued to mil-spec dimensions. The frontstrap is machine-stippled to improve the gripping surface. Stippling was chosen over checkering for several reasons. Proper stippling provides a positive gripping surface without the drawbacks of checkering, which can trap dirt, skin or blood and is hard to clean. Checkering also tends to abrade gear and can be dented and broken. Another small and often overlooked detail involves stock bushings that, when improperly installed, tend to back out when removing the stocks. C&S properly torques and stakes the bushings to prevent this issue. The steel mainspring housing features a recessed lanyard loop and is stippled and cleanly blended to the frame and magazine well.

The slide features front and rear cocking serrations to facilitate cycling and press checks. The C&S-made, 5-inch, drop-in barrel is matched to a finger-tight barrel bushing that has been opened up to enhance reliability. This combination gives the Trident II, on average, 2-inch accuracy at 25 yards. The ejection port is lowered, and its leading edge has been relieved to allow for the safe ejection of an unfired round. C&S uses a machined extractor that is inspected for proper heat treatment and then fitted, radiused and tensioned. The diameter of the firing-pin hole has been opened to the original .45-caliber specification.

External controls include a C&S beavertail grip safety with a palm swell that is precisely fitted and specially modified. The hammer recess is re-cut and enlarged to prevent debris from being trapped in the recess and jamming the pistol. The ambidextrous thumb safety is a C&S extended design that features reduced-width paddles. Status indicators are receded and color-coded to show white when the safety is engaged and red when the safety is in the “off” position. I first wondered why the fire-control status dots were color-coded, but former Special Forces operator and gunsmith Larry Vickers was one of the first to use red/white dots on a 1911. The red for “fire” and white for “safe” are internationally accepted indicators on many weapons. It’s a nice custom touch for the pistol. The slide stop is a Greider design that provides a solid ledge for both dropping the slide during reloads and manually locking the slide to the rear.

C&S selected a solid, medium-length trigger with a solid shoe and a stainless steel bow. It’s also fitted with an internal overtravel stop. The medium-length trigger allows for ample space to run the Trident II with cold weather gloves. The solid trigger lacks the fashionable three holes that can attract debris and contribute to a malfunction. The trigger pull on my test pistol broke cleanly at 4.75 pounds with no overtravel.

The Trident II features a Heinie Ledge rear sight with a cocking ledge on the forward edge of the blade. The C&S “Strong” front sight was specifically developed for the Trident project. The sides of the Strong front sight have been widened at the base, eliminating the 90-degree weak point found on traditional designs. This provides a stronger design for hard-use environments. A Trijicon tritium insert is ringed with a white circle for more-positive acquisitions during a variety of conditions.

The frame, slide and all major components of the Trident II are coated with a nickel-boron finish. This allows the pistol to operate in harsh environments with little or no lubrication. Dust and dirt are the enemy of all firearms, and 1911s are notorious for not running well without proper lubrication on the rails, barrel hood and muzzle. The PVD nickel-boron finish offers exceptional lubrication and anti-corrosion properties. In addition, carbon deposits and fouling do not stick to the finish, making cleaning significantly easier.

Once the Trident II build is completed—but before being sent out for finishing—the pistol is test-fired at 15 yards to check for both function and reliability. It is at this step that the front sight blade is cut for the proper zero with 230-grain FMJ ammunition. The front sight is then removed and sent to Trijicon for the white circle and tritium insert. The other components are then ready to be nickel-boron coated. After all parts are returned, the pistol is then reassembled and the sights are reinstalled. The pistol is test-fired a second time for a final function check and the zero is confirmed. The test-firing is done with the three 7-round, nickel-boron-coated magazines that are shipped with the pistol. During the process, a minimum of 56 rounds are fired through each pistol. While this process is both expensive and time consuming, it ensures the reliability of every Trident II.

I was fortunate to receive the first production Trident II for this evaluation. Bill was also interested in getting some initial feedback, since this was the very first pistol built on the new frame and slide. During the testing, I noticed two minor issues. The first was that the lower trailing edge of the thumb safety needed to be radiused to remove a sharp edge. The second item involved the fire control and trigger pull. The nickel-boron finish resulted in a very slick trigger pull that felt lighter than the measured 4.25 pounds. Both of these were very minor issues, but Laughridge felt they were significant enough that each will be addressed in the production pistols.

The fact that a custom 1911 is still the first choice of many of today’s warriors is a tribute to John Moses Browning and his steadfast creation. In truth, the Trident II is not significantly different from Browning’s original design. However, modern production technology, quality parts and specific modifications enable this 100-year-old design to continue to be relevant. While there are more expensive 1911s on the market, I am not sure that there is one more reliable. The Trident II is purpose-built to go into harm’s way. Whether in the desert of Iraq, the mountains of Afghanistan or Main Street, U.S.A., the Trident II is ready for any mission. 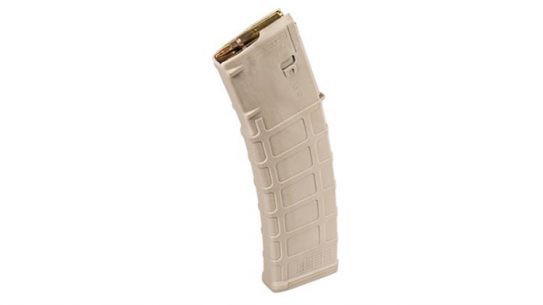 Built for the desert, the all new sand-colored PMAG 40 GEN M3 magazine from...