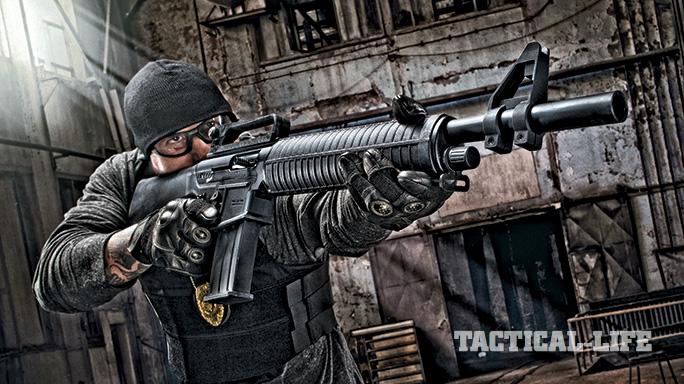 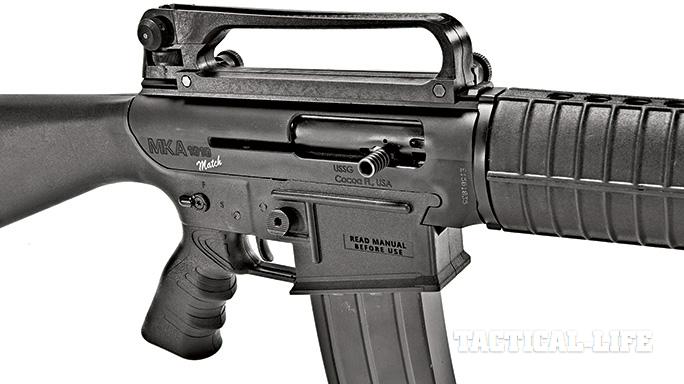 2 of 5
Photo by Straight 8
Gun Review: EAA’s MKA 1919 Match ScattARgun
The MKA 1919 Match comes with an AR-style carry handle/rear sight that can be removed for adding sights and optics to the top rail. Also note the shotgun’s enlarged, right-side-mounted charging handle. 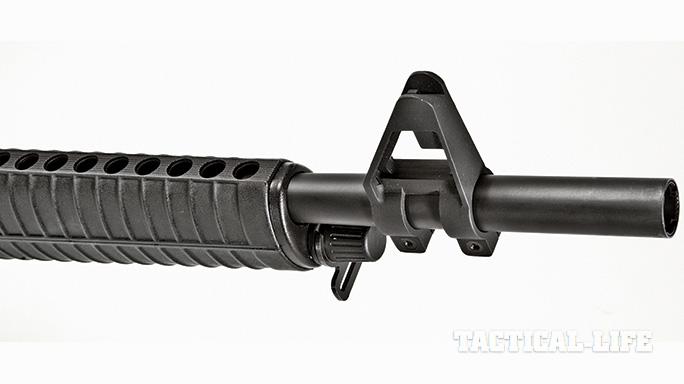 3 of 5
Photo by Straight 8
Gun Review: EAA’s MKA 1919 Match ScattARgun
The shotgun sports an A2-style front sight and a polymer handguard similar to an AR’s, and the 18.5-inch barrel comes with three interchangeable chokes as well as a tool to install them securely. 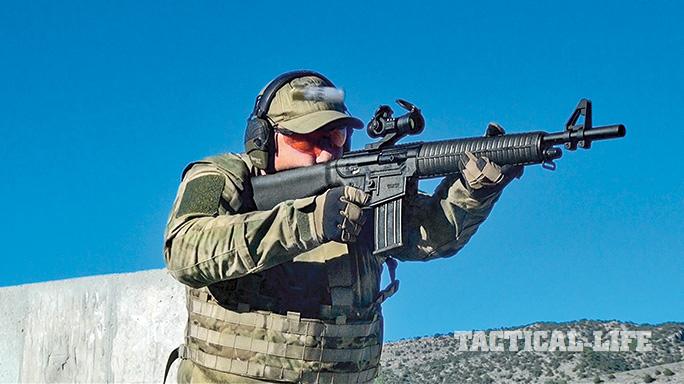 4 of 5
Photo by Straight 8
Gun Review: EAA’s MKA 1919 Match ScattARgun
With a Bushnell CQTS red-dot sight mounted on the top rail, the MKA 1919 Match ran flawlessly on the range and produced tight patterns during testing. 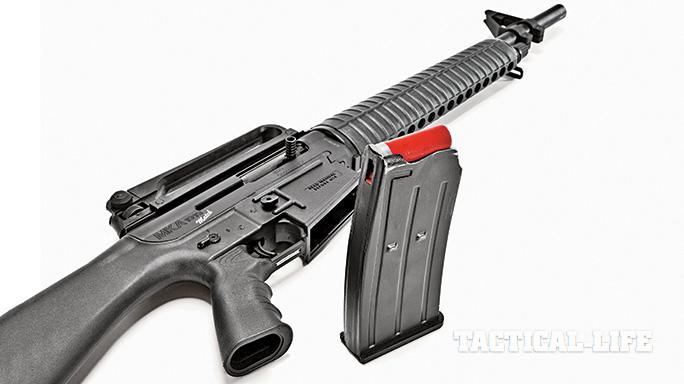 5 of 5
Photo by Straight 8
Gun Review: EAA’s MKA 1919 Match ScattARgun
EAA ships the MKA 1919 Match with two metal, five-round magazines that can accept either 2¾- or 3-inch shells. After the last round is fired, the bolt locks back—a plus for today’s operators. 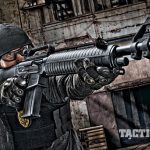 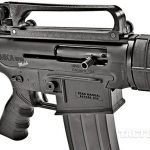 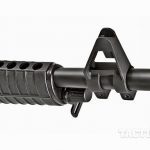 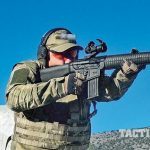 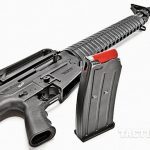 As a longtime tactical shotgun user, it is always exciting to see new designs that meet the needs of modern shooters better.

I come from an era where you figured out how to use what was assigned, so it is nice to see weapons built for shooters. Typical shotguns use tubular magazines, limiting their capacity and making reloading problematic at best, especially in a real-world tactical environment. Sure, they are better these days, but for the most part tubular-magazine-fed shotguns have been retooled, accessorized and altered to their limits of reliable and practical operation. Yes, they are faster, smoother and better than ever before, but they’re still tubular-magazine-fed shotguns, and many alterations have no place outside a competition. In short, keeping these shotguns loaded and operating in a police or tactical environment remains their biggest drawback. While other issues have presented themselves, this is the one most commonly cited as why shotguns are replaced with ARs, and it is pretty hard to argue with. Having a shotgun that operates just like an AR would be a ton easier to use, train with and transition to from your AR-style rifle.

Prior to the introduction of the Turkish-made MKA 1919, attempts at an AR-based 12-gauge shotgun were pretty rare. The USAS-12 was very interesting and fun to shoot, but it’s a select-fire weapon. That, coupled with its Korean point of origin, made it a novelty, even when attempts were made to import semi-automatic variants. For military use, there’s the AA-12 or Atchisson Assault shotgun, but it’s only available in full-auto, making it even more rare.

A truly viable AR-style shotgun did not arrive until the Akdal MKA 1919 hit the market in 2007. About as close to an AR as it gets, it has become incredibly popular among enthusiasts and competitors, with some law enforcement agencies getting their hands on it. Imported from Turkey, it is lightweight and affordable, and now it’s available in completely modified versions. Base guns cost $500, with systems like the Tooth & Nail conversion running closer to $2,000. The original magazine capacity was five rounds, with 10-round aftermarket versions available. It’s all neat stuff, but the MKA 1919 has been just a bit out of reach for most looking for a duty shotgun. But, the MKA 1919 Match, imported by European American Armory (EAA) Corporation, has done quite a bit to change that.

The MKA 1919 Match is a magazine-fed, AR-style shotgun designed to use both 2¾- and 3-inch shells. Built largely from polymer, it is lightweight and handy. Similar to a full-sized AR-15, it uses a flattop rail, a detachable carry handle/rear sight and an A2-style front sight post.

The shotgun’s controls mimic those of the AR, and the MKA 1919 Match uses an ambidextrous safety along with enlarged bolt and magazine releases. Its magazines are metal, and the action locks open after the last round. An enlarged charging handle is paired with the redesigned bolt. Both the action and loading block have been redesigned for increased
reliability.

It’s now easier to take the MKA 1919 Match down for cleaning and maintenance, and two gas rings as well as a floating metal feed ramp have been installed for enhanced reliability with different types of ammunition. EAA ships the shotgun with two metal, five-round magazines, three chokes and a tool to install them.

Primarily focused on the MKA 1919 Match’s use as a mostly out-of-the-box tactical shotgun, the only accessory I added for testing was a Bushnell Elite Tactical 1x32mm CQTS red-dot sight, which has seen use on several weapons and has held up well over time. It mounts easily, is pretty light and offers fast target acquisitions. As I mentioned, the MKA 1919 Match ships with an AR-style carry handle/rear sight, although it is not nearly as substantial as a typical A2-style carry handle. I used it for the first few rounds on the range, and it works fine, but the red dot offers a bit more precision. If you plan on running a miniature reflex sight, you’ll probably need to add a riser to work with the front sight. (Also, the front sight is not a gas block and can be removed easily if needed. Just loosen two screws and it’ll slide right off. But, short of adding an aftermarket handguard, you’ll have no front sight capability.)

Much of this shotgun is polymer, making it pretty light. Its official weight is 7.5 pounds unloaded, and it felt similar to running a 20-inch-barreled AR. It also utilizes a fixed stock with a 14.5-inch length of pull, which is a tad long in the tactical world. It was usable while wearing body armor, but it took some practice to get the shotgun quickly into my shoulder pocket. Those with shorter arms may find the MKA 1919 Match cumbersome. Add plates and a carrier and it will be a bit more difficult to maintain a squared stance.

The factory handguard is long, making it really easy to get a solid handhold. Even if you hold the handguard close to the receiver, you’ll still be in control. It was also easy to stretch my support hand farther down the forend to effectively control the muzzle rise. Moving between targets, the shotgun was fast, solid and accurate.

The two supplied chokes use the Winchester thread pattern, so you can add brakes and such with the same threads. The shotgun patterned well with the standard choke that came installed, so there was no need to install the others.

My biggest concern with this shotgun was its reliability right out of the box. EAA states that it ran 6,000 rounds through an MKA 1919 Match without a single failure. It is also supposed to run lower-recoil practice loads. From my perspective, with an MSRP of $699, this is critical. Most patrol shotguns are pretty Spartan, so all the goodies are nice but not necessarily required. It does need to work, though, and with practice ammunition.

I ran several popular loads through this shotgun, and they all worked perfectly, including the most common police practice load, Federal’s 1,200-fps Top Gun Target ammo. The MKA 1919 Match functioned with both low- and high-brass loads, along with aluminum- and brass-rimmed hulls. Firing slugs into a 4-inch circle at 25 yards, the shotgun was plenty accurate. With tactical buckshot, the MKA 1919 Match created patterns on par with most every shotgun these days—inside 6 inches out to 25 yards and one large hole from 15 yards and in. This shotgun performed as well as any of the customized shotguns I’ve tested in the last few years.

The shotgun is pretty comfortable to shoot from prone, which is something you can’t say about most tubular-magazine-fed shotguns. The MKA 1919 Match’s ergonomics mimic an AR’s, making it easy to stay accurate from off-hand, kneeling, prone and other unsupported positions. Using an overhand grip, the shotgun stayed put, even with full-bore slugs and high-power buckshot. I only used 2¾-inch shells since 3-inch shells are rare in police circles. While 3-inch magnum buckshot is the norm in the military, 2¾-inch shells are preferred in law enforcement. With the Bushnell CQTS red dot, the MKA 1919 Match was fast on target and light on recoil. It swings just like an AR and points similarly, and even its trigger is typical of a mil-spec model.

The bolt locks back after the last round, and the bolt release worked every time. During my testing, this was the biggest single advantage. Reloading this shotgun was just like reloading one of my ARs. The magazines fit in my .308 pouches and chest rigs, making the transition pretty simple. The only difference was the need to run the bolt handle instead of a charging handle when necessary. Over the course of the day, the action never failed to go into battery using the bolt release, so it never came up as a rule. While I didn’t test the original MKA 1919, the Match’s enlarged bolt and magazine releases are the perfect size; they’re very easy to access without getting in the way.

The ambidextrous safety was also very handy. It was crisp and operated just like my similarly equipped ARs, meaning I didn’t have to alter years of training. In short, moving back and forth between the shotgun and an AR was seamless.

If you are looking for a duty shotgun requiring no real change in operation from your AR, this gun fits the bill about as well as possible. That’s probably why more than a few agencies have inquired about them. Transitioning to the MKA 1919 Match would be pretty seamless beyond learning to run a right-side-mounted charging handle when needed.

As I mentioned, the shotgun ran flawlessly and the bolt always held open after the last round. Even my VEPR would not do that without alteration, and no similar semi-automatic shotgun I’ve tested has worked this well right out of the box. The MKA 1919 Match is also a soft shooter, making typical tactical buckshot loads very controllable and easy on the shoulder.

For serious consideration as a police shotgun, you’ll need to mount a flashlight. There are a few inexpensive barrel mounts that might work with the MKA 1919 Match. You could also install a railed handguard, but since it’s an import, you’ll need to make sure you are still 922r compliant. Several companies make aftermarket accessories to accommodate this for the earlier versions. Many are working on them for the Match. Given time, this won’t be an issue.

Overall, this was an impressive shotgun. It ran well with the most popular practice ammunition used by competitors and law enforcement. Its accuracy with slugs was excellent.

The MKA 1919 Match is a pretty solid choice for duty. It is easily as well equipped for patrol work as most of the other choices out there, and at about half the cost, so it’s definitely worth a close look if you are in the market for a semi-automatic shotgun. 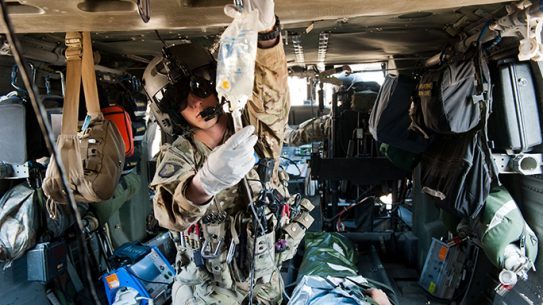