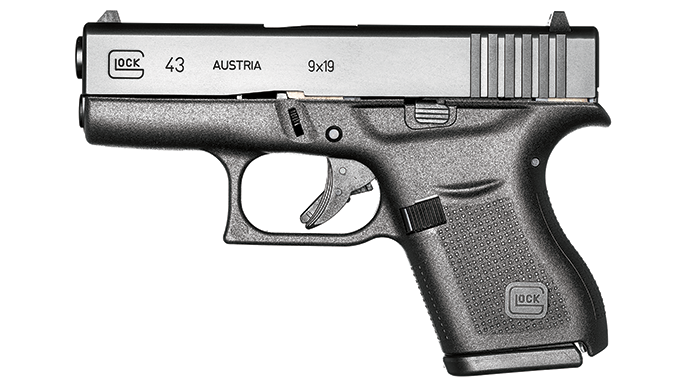 1 of 6
Gun Review: The Ultra-Compact Glock 43 9mm
Only 6.26 inches long, 1.02 inches wide and weighing 17.95 ounces with an unloaded mag, the G43 packs 6+1 rounds of 9mm firepower in a truly tiny package built for concealed carry and backup duty. It also operates just like all other Glock pistols, so it’ll pair well with its full-sized brethren. 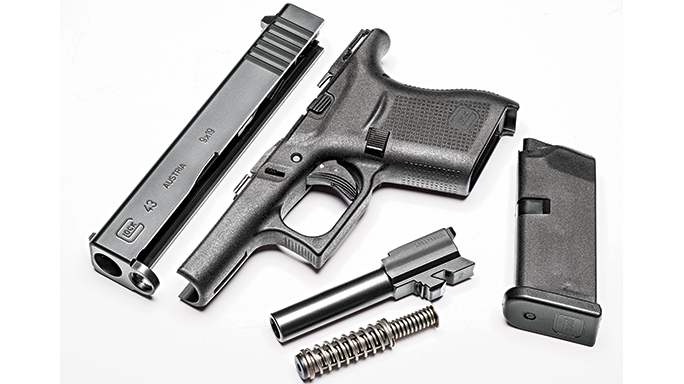 2 of 6
Gun Review: The Ultra-Compact Glock 43 9mm
As with all Glock pistols, the G43 features the Safe Action system and is easy to take down for maintenance and cleaning. 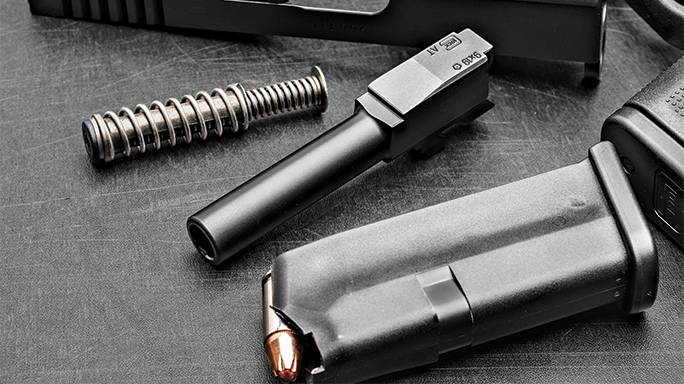 3 of 6
Gun Review: The Ultra-Compact Glock 43 9mm
Like other Glocks, the G43 features a hexagonal-rifled barrel as well as a dual recoil spring assembly for softer shooting. 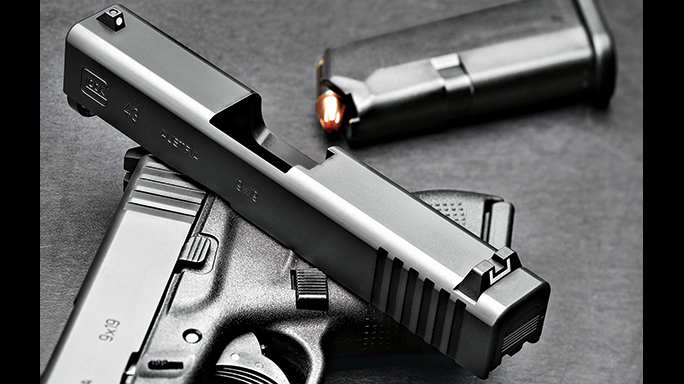 4 of 6
Gun Review: The Ultra-Compact Glock 43 9mm
The slide sports standard Glock sights, including a white-dot front unit and a white-outlined rear sight. 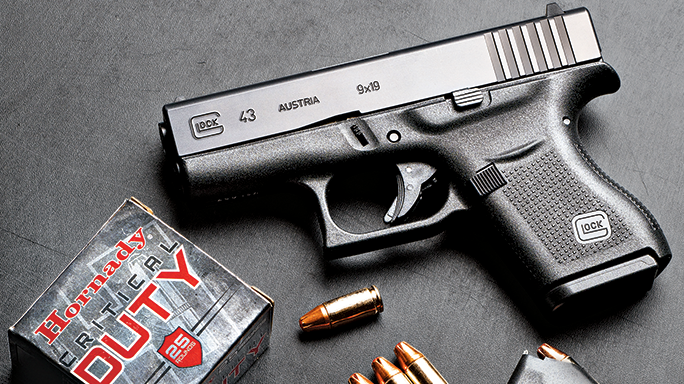 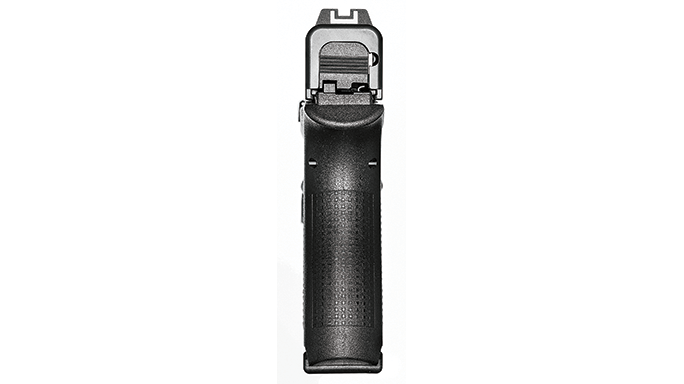 6 of 6
Gun Review: The Ultra-Compact Glock 43 9mm
Only 6.26 inches long, 1.02 inches wide and weighing 17.95 ounces with an unloaded mag, the G43 packs 6+1 rounds of 9mm firepower in a truly tiny package built for concealed carry and backup duty. It also operates just like all other Glock pistols, so it’ll pair well with its full-sized brethren. 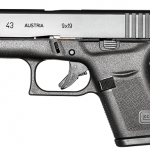 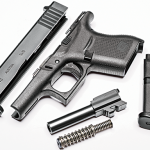 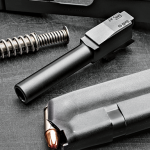 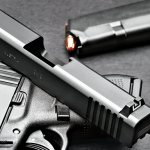 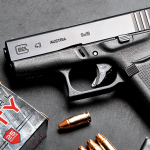 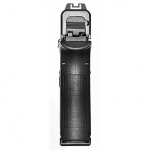 I was one of a small coterie introduced hands-on to the Glock 43 pistol in early March of 2015, before the gun’s official introduction to the public at the NRA Annual Meeting in Nashville, Tennessee. (The public unveiling at the NRA function seemed appropriate, in light of the very long history of the NRA’s involvement with American law enforcement firearms training.)

From the beginning, it was apparent that the Glock 43 had great potential as an off-duty or backup weapon for law enforcement. This has always been a significant portion of the concealed-carry market.

Glock’s entry into the subcompact pistol market began almost 20 years ago, with the introduction of the first “baby Glocks.” These were the Glock 26 in 9mm and the Glock 27 in .40 S&W. At the risk of some slight oversimplification, these were Glock service pistols “chopped” at the muzzle and butt to achieve a smaller size. The truncated grip frames, of course, were accompanied by lower-capacity magazines. The G26 magazine held 10 rounds of 9mm instead of the 15 in the “compact” Glock 19 or the 17 in the full-sized Glock 17. The G27’s magazine was home to nine rounds of .40 S&W, compared to 13 in the compact G23 and 15 in the G22 service pistol. These small Glock pistols were soon accompanied by the G33, in .357 SIG with a nine-round magazine, the slim-line G36, with a 6+1 capacity of .45 ACP, and the G39, which holds 6+1 rounds of .45 GAP ammunition.

With the exception of the little .45s, these “baby Glocks” still had true double-stack magazines, requiring relatively wider grip frames. This made them a bit blocky when an officer carried one under his or her arm in a backup holster attached to concealed body armor, or in a pocket holster, or strapped to the ankle. Demand arose for something a bit slimmer, even at the price of utilizing a reduced-capacity single-stack magazine.

Glock answered that demand in the beginning of 2014 with the introduction of the Glock 42. The slimmest (with a 0.83-inch-thick slide) and lightest (12.17 ounces unloaded) of the lineup, the Glock 43 is chambered for the .380 ACP cartridge, and has a magazine that holds six rounds to back up the one in the chamber. On the theory that a marginally powerful gun the officer would actually carry for backup or off-duty was better than a more powerful one the officer left at home, many departments authorized, or even bought and issued, Glock 42s to supplement the agency’s duty weapons. But the demand remained for something about the size and weight of the G42 that would handle the more potent 9mm cartridge. Glock’s answer to that demand is, of course, the Glock 43.

What does a working cop want a backup gun to be? Compact and light enough to wear all day in addition to the required, heavy gear; otherwise, it won’t be there when the officer desperately needs it. It should be powerful enough to give its user a fighting chance of stopping a deadly, fast-breaking attack. As a piece of emergency rescue equipment, it has to be reliable. Most experts agree that the backup gun should work just like the primary gun with which the officer has become most familiar and competent.

In a world where law enforcement officers carry Glock pistols more than any other, the Glock 43 works just like any other Glock from the operator’s perspective. Even .45 ACP fans will usually (if grudgingly) admit that, with the best ammunition, the 9mm is certainly adequate in power. Reliability is the hallmark that made Glock pistols so popular in police service in the first place, and the folks at Glock assure us that extensive testing indicates the Glock 43 will live up to the brand’s long-established standard.

With all of those criteria checked off, the only elements remaining to discuss are size and weight. The Glock 43 weighs just over a pound unloaded, only an ounce or two more than the Airweight revolvers that have proven so popular in this role for generations. The Glock 43 is also only 1.02 inches wide, meaning it will lie flat and close to the body, with minimum bulge and discomfort. The baseline criteria are now pretty much met, with little more to discuss than cartridge capacity.

The single most common criticism I’ve heard of the newest Glock is, “It only holds seven rounds.” There are other brands of slim, lightweight 9mms on the market that hold a round or two more. The short grip frame of the Glock 43 was given priority by Glock engineers so it would hide more efficiently in a pocket and also be less likely to hang up when drawn from that location. A one-round difference as a choice factor between high-quality police concealment guns is not a new thing. It goes back to the mid-20th century, when a cop looking for a little snub-nose .38 Special had a choice between the six-shot Colt and the five-shot Smith & Wesson. There were famous police gun experts in those days who championed both sides. Bill Jordan of the Border Patrol carried a five-shot S&W Chief Special Airweight .38 for backup; Jim Cirillo of the NYPD Stakeout Squad chose a six-shot Colt Cobra .38 as a pocket hideout; and Sheriff Charles “Skeeter” Skelton used both brands interchangeably for such needs.

So it will be with the Glock 43. I would not be surprised to see longer magazines become available for the Glock 43, allowing another round or two and also creating a place for that last finger on the grip, though Glock says that is not in its own immediate plans. I personally do not see the six-round magazine as a shortcoming; the person who wants more rounds can simply buy another pistol, including Glock’s own long-proven G26.

Shooting standard-pressure, 115-grain 9mm ammunition, the Glock 43’s recoil wasn’t bad at all. The pinky finger of the firing hand tucks comfortably under the butt. One function of a backup gun is allowing a wounded officer to still fight back; I found the G43 to work reliably and controllably while firing with just my non-dominant hand, as well as with a dominant-hand-only grasp. Even with an exaggerated “limp wrist” hold, the Glock 43 suffered no malfunctions, an important consideration in wounded-officer situations.

Between that pre-introduction shooting session and the deadline for this article, I did not have an opportunity to bench-rest the Glock 43 for proper accuracy testing. However, shooting at 7 yards off-hand, the Glock 43 put every 9mm bullet into a very tight group. Extrapolating from that, I expect the accuracy to be ample for this pistol’s intended purpose. The single failure to fire I observed early in testing might well have simply been a bad round, not a problem with the gun, and the single unintended magazine drop I observed may have been due to sloppy handling by the shooter. Time will tell, but I am optimistic.

“VA LawDog,” a young cop on GlockTalk.com, writes, “I know a lot of agencies in my area have some tight standards for backup guns. Mine just recently even started allowing them. They say it has to be a Glock, and there is a list of approved calibers…The .380 has never been approved for carry in a backup gun, despite pressure from the guys to approve it.” He sees the 9mm Glock 43 becoming hugely popular with his agency.

More than one state police agency issues each of its troopers not one Glock, but two: a full-size service pistol for uniform holster wear and a “baby Glock” for off-duty/backup carry. One such agency is presently on its third set of Glocks. They started the practice with the .40-caliber Glock 22 coupled with the “baby” Glock 27. When they decided they wanted a larger bore diameter, they adopted the Glock 37 for uniform carry and the Glock 39 for backup use, both in .45 GAP. Later convinced that 9mm ammunition had improved sufficiently in potency, this agency went to the Glock 17 in that chambering for uniform wear and the little Glock 42 .380 for backup. This department is keeping its G17s for the foreseeable future, but it is looking very strongly at trading in its .380s for the 9mm Glock 43 to fulfill the backup/off-duty role.

The Marietta, Georgia, Police Department (MPD) famously announced last year that it had adopted the G42 .380 as a backup gun for its G22 duty pistols. The reason was that many of its armed personnel felt the G27 the department offered for that function was a little too bulky to conceal with both discretion and comfort. A huge percentage of those cops, however, leaped at the chance to carry the smaller, thinner, lighter G42. The MPD, after thorough pre-announcement testing, has already stated that it will replace the G42 with the more powerful Glock 43 as its primary backup handgun.

Glock’s long-awaited single-stack 9mm is here, and early orders indicate that it’s something a lot of consumers want, many of those consumers being law enforcement officers who will utilize their G43s both on and off duty. 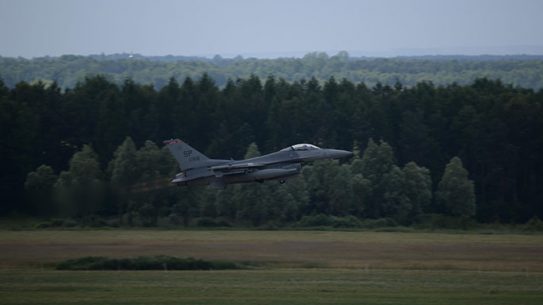 US Air Force Participates in Ramstein Guard with Polish AF