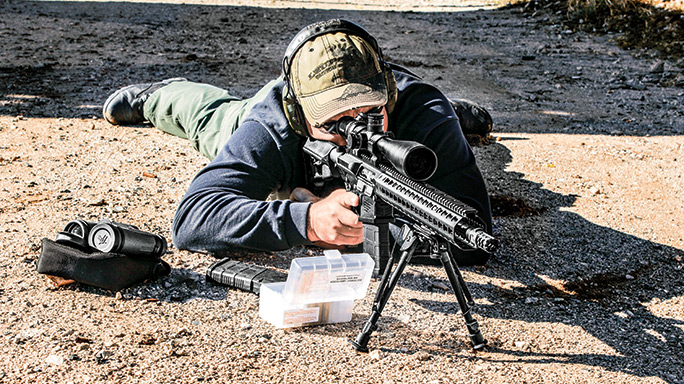 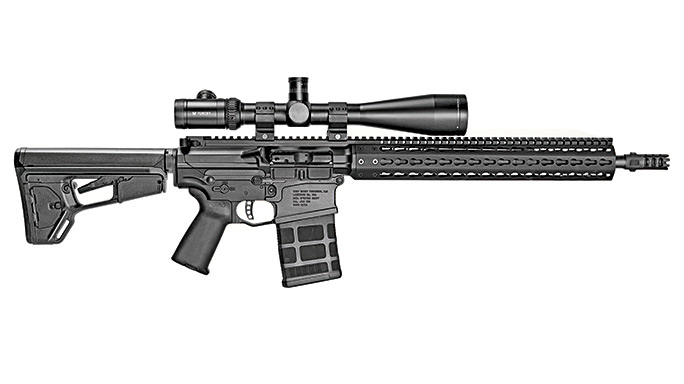 2 of 5
Gun Review: Grey Ghost’s Specter Heavy Rifle
The Specter Heavy is ultimately greater than the sum of its parts—which is saying something considering the quality of the parts used to build it. 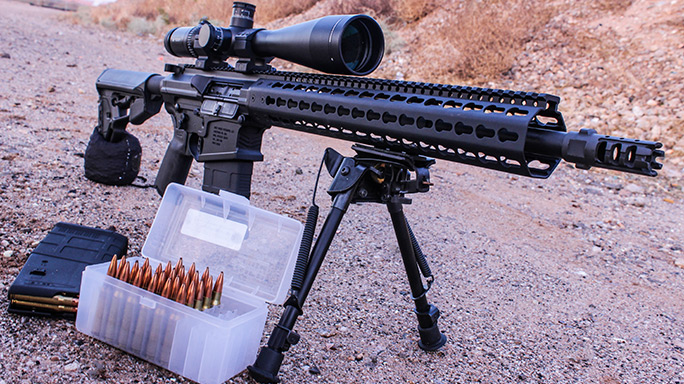 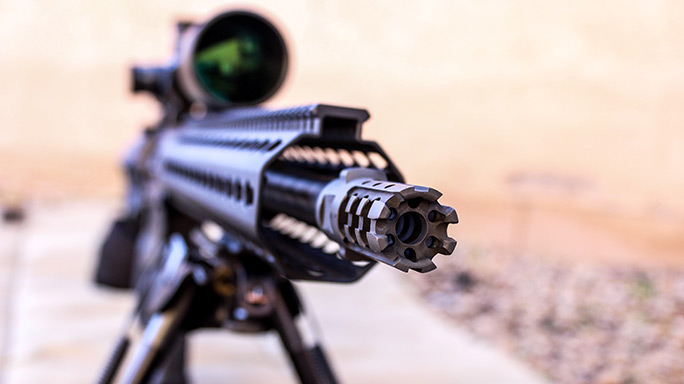 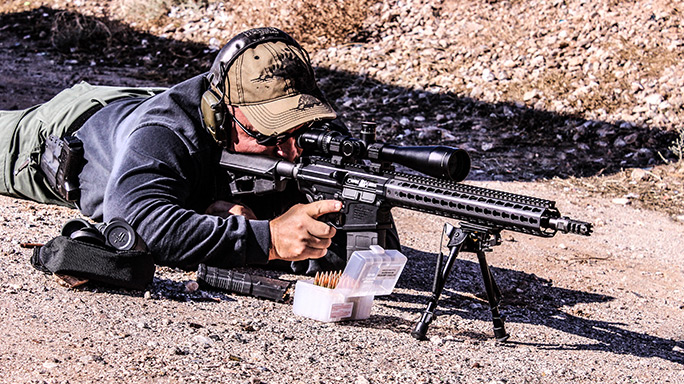 5 of 5
Gun Review: Grey Ghost’s Specter Heavy Rifle
“Ultimately, the first full-production Specter configurations are a reflection of who we are and what we’d want to take into a fight.” 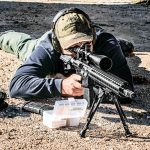 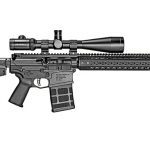 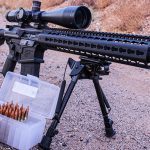 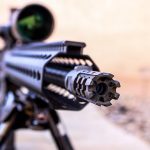 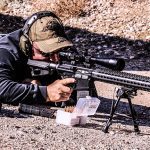 There have been many companies in the past that have ventured outside their primary realm and into new territory. Some succeed and some do not. Few, however, have made as bold a step as Grey Ghost Gear and its expansion into the precision firearms world. While Grey Ghost is well known in the tactical and firearm world, it is for its packs, plate carriers and other related gear. Entering what some see as a crowded market takes a serious plan, a serious rifle and guile. Grey Ghost Precision has come out of the gate with all three.

With its new Specter series of precision-built AR-platform rifles, Grey Ghost has worked hard not only to bring new products to the market, but also those worthy of its name. A unit ran the prototypes for these rifles during spin-up training for Afghanistan, and their feedback proved valuable in improving the rifles even further. Coupled with evaluations by Special Forces marksmanship instructors, competition shooters and hardcore hunters, the product seen today is the result of serious evaluation and feedback. The Specter series currently includes two rifles, the Light and Heavy, in 5.56mm NATO and .308 Winchester/7.62mm NATO, respectively. I recently got my hands on the latter for testing.

Ghost With The Most

The Specter Heavy represents the ideals of Grey Ghost Precision. While being extremely accurate, it is by no means a delicate flower. Built to be bumped, carried and used, the Specter Heavy is a workingman’s gun. The Heavy fits the role of a designated marksman rifle (DMR) with out-of-the-box sub-MOA accuracy. Produced in cooperation with the ever-respected folks at Mega Arms, the Specter Heavy is crafted by some truly top-grade professionals.

The proprietary upper and lower re-ceivers are machined from 7075-T6 billet aluminum before being Type III hardcoat anodized with an impressive surface hardness of 60 HCR. A tensioning screw in the lower ensures a tight lockup between the receivers. The bolt in this gun is both high-pressure (HP) and magnetic-particle (MP) inspected. Manufactured from casehardened 9310 steel, the bolt also features enhanced extractors. The gas key is properly staked and sealed to ensure a positive gas seal.

The 16-inch, medium-weight, 416 steel barrel has a 1-in-10-inch twist rate and an 11-degree target crown, and Grey Ghost ships the rifle with a Gemtech muzzle brake. The barrel is black nitride coated in and out. Surrounding the barrel and mid-length gas system is a 14-inch MKM KeyMod handguard from Mega Arms. The forend is hand-fitted to the upper using Mega Arms’ custom lockup system, which is significantly stronger than standard attachment systems.

The lower receiver comes standard with an ambidextrous bolt release and the Combat Ambidextrous Safety Selector (CASS) from Battle Arms Development. The single-stage trigger is very smooth and crisp, with a 4.5-pound pull. Rounding out the Specter Heavy is a carbine buffer set and Magpul’s ACS-L buttstock and MOE+ pistol grip. It is as good looking as it is reliable.

While specs and reputations can get you so far, it is always time on the range that tells the real story. Range day began on a windless sunny morning. To wring out the rifle’s accuracy, I added a Vortex Viper PST 6-24x50mm scope in Vortex rings. After a quick zero and target reset, rounds quickly began to fly downrange. Two major items became evident almost immediately. First was that there is a better-than-advertised trigger on the Specter. It is a perfect fit for a professional-quality DMR rifle. Second was the muzzle brake, which significantly helped reduce muzzle rise. These two factors allow for not only accurate shooting, but also quicker follow-up shots. It was very easy to stay on the Vortex scope and prepare for my next shot.

To measure the rifle’s accuracy, I fired five-round groups at 100 yards. In the mix this session was Federal’s 168-grain Gold Medal Match ammo, Black Hills’ 168-grain Match HPBTs and Patriot Munitions’ 168-grain AccuFlight rounds. I fired these groups from a bench with a bipod and a rear sand sock. Even with a very limited barrel break-in period, the Specter Heavy proved it was as good as Grey Ghost said it would be. All of the groups flirted with 0.75 MOA, but the Patriot Munitions AccuFlight ammo clustered into just over 0.5 MOA. This accuracy continued as targets moved from paper to steel farther and farther out. I ultimately ran out of range at 800 yards, and the Specter Heavy was still running flawlessly. The steel target at that distance developed one central grey spot as rounds continued to strike in the same area. The Specter Heavy is a serious contender for being one of the finest DMRs on the market. Ignoring a few obvious mistakes I made during the testing, the rifle performed like a true tack driver.

Because it is designed as a DMR, I ran it from a variety of positions as well. From kneeling to standing and everything in between, the Specter Heavy ran well. Initially when I handled the rifle, I could feel it was balanced towards the rear. After mounting glass and rings, it became clear that the balance was not an accident. With the rifle ready for duty, it became well balanced and easy to run.

The partnership between Mega Arms and Grey Ghost has produced an exceptional rifle. Long encouraged to build a complete rifle, Mega Arm has chosen wisely in teaming up with Grey Ghost Precision. Both of the companies’ focus on real-world applications is the cornerstone to this rifle.

In a statement, Grey Ghost Precision noted, “The Specters are built by Mega Arms. We have always admired the work of those PNW geniuses who are well known for high-quality designs and strict production values. They maintain quality control measures of the highest order and have an incredible work ethic. Mega has built rifle parts and receivers for many other companies, but never before have they put together a complete rifle in its entirety—as it turns out, they were looking for someone they felt would make a good partner. Thus the partnership. It’s a huge honor for us.

“Ultimately, the first full-production Specter configurations are a reflection of who we are and what we’d want to take into a fight. First and foremost, these are combat rifles. Although they are very accurate, they can be banged around, used and abused, all while maintaining intransigent reliability. They are crafted to discriminating specifications, and we are supremely confident you are going to appreciate the attention to every detail on these rifles.”

Grey Ghost Precision seems to have achieved its goal with the Specter Heavy. It’s a truly accurate and reliable 7.62mm NATO rifle with several cutting-edge enhancements while still being affordable. The Heavy has set a new watermark in the DMR world, and I’m sure the Light version is just as impressive.

For more information on the Specter Heavy, visit greyghostprecision.com. 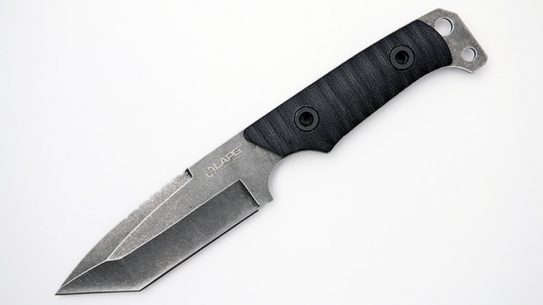 The all new Rendition Fixed Blade Knife from LA Police Gear is a full-tang...