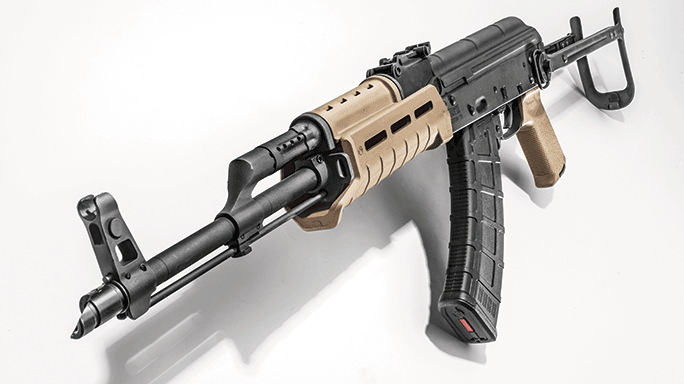 1 of 10
Gun Review: Interarms’ Magpul-Enhanced AK-T Rifle
The AK-T from High Standard/Interarms offers the best combination of power and reliability in a compact design. It was also very accurate on the range during testing. 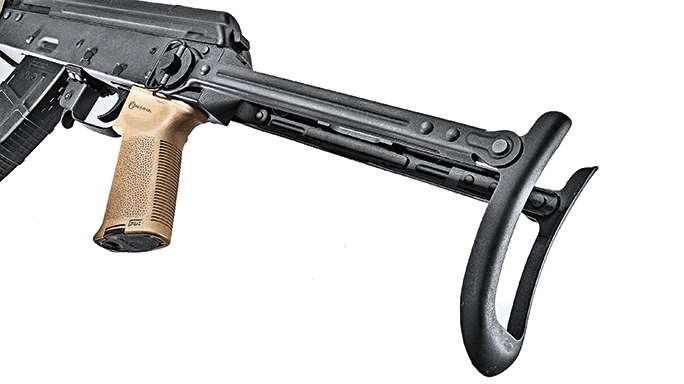 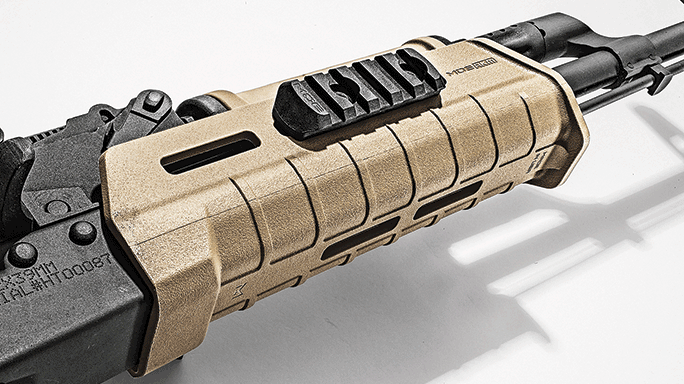 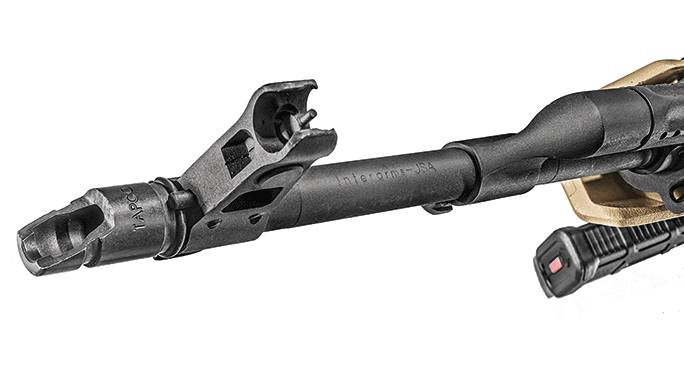 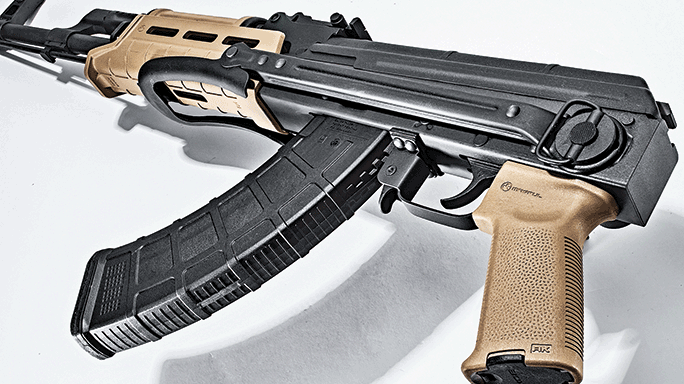 5 of 10
Gun Review: Interarms’ Magpul-Enhanced AK-T Rifle
The left side of the under-folding stock’s hinge features a large sling loop for easy transport.

6 of 10
Gun Review: Interarms’ Magpul-Enhanced AK-T Rifle
The receiver has dimples above the mag well to help orient the mag correctly when seated. 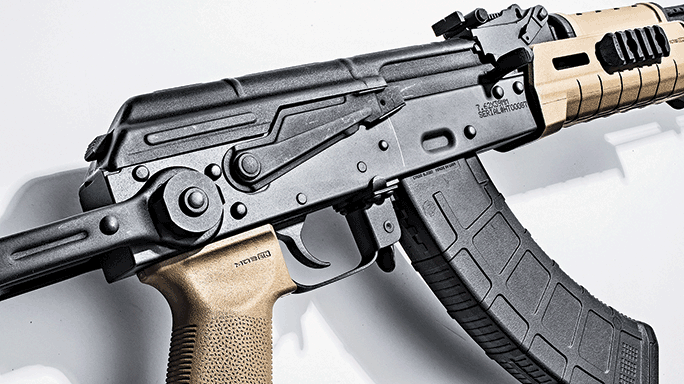 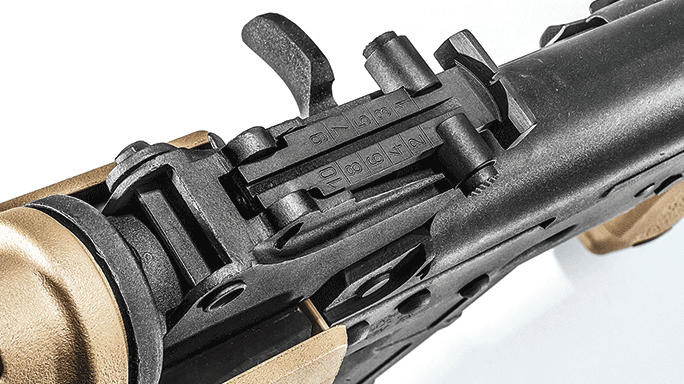 8 of 10
Gun Review: Interarms’ Magpul-Enhanced AK-T Rifle
The adjustable, ladder-style rear sight is marked for shooting out to 1,000 meters. 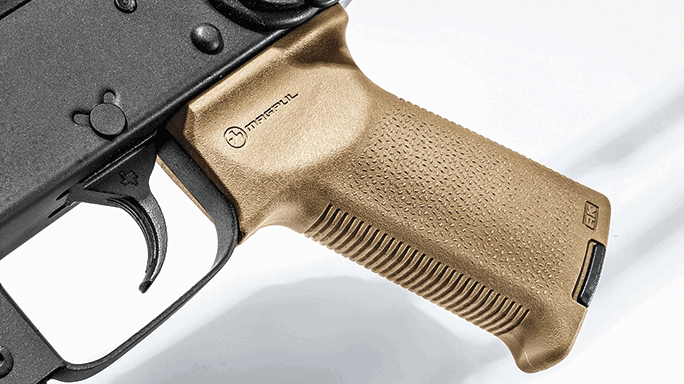 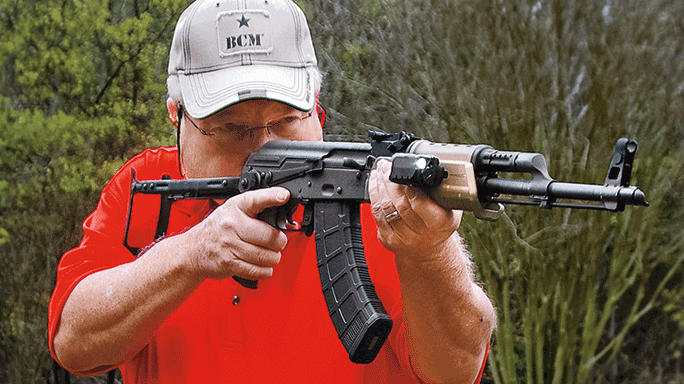 10 of 10
Gun Review: Interarms’ Magpul-Enhanced AK-T Rifle
The AK-T is only 26 inches long with the stock folded, and it comes with a 30-round Magpul PMAG. 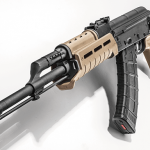 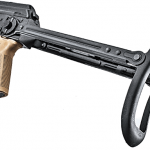 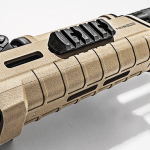 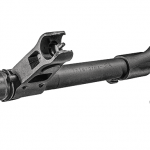 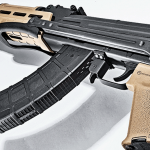 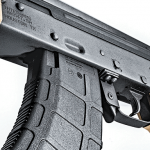 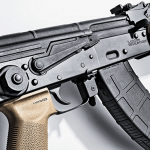 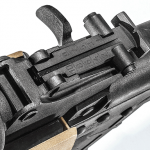 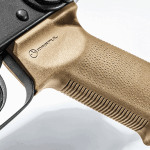 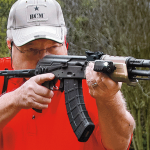 The AK-47, AKM and AK-74 have proven themselves around the world as prolific, viable, durable and effective weapons. The AK family in its full-auto, military-configuration is a highly capable weapon system that can quickly adapt to a wide range of roles and environments. With their introduction in the U.S., AKs started a new career as a paper-puncher and gained a new group of admirers.

These paper-punchers are still viable, durable and effective weapons. They are quite capable of taking on the job of protecting hearth and home or riding patrol with law enforcement officers. In the last several years, with increasing government restrictions being implemented as well as increasing demand limiting supply, AK variants have become somewhat scarcer than in past years. But still the AK survives, even if many may start as parts kits.

High Standard and Interarms, two well-recognized names with long histories in the market, have been together under the High Standard banner since 2000. Marked with the High Standard name are target .22 LR pistols, 1911s and really nice M4 variants. Interarms’ line includes a number of AK variants: one in 5.45x39mm and the balance chambered for the 7.62x39mm cartridge. High Standard and Interarms entered the AK-47/74 market back in mid-2000, producing Mikhail Kalashnikov’s creation for other companies. Shortly thereafter, they added a line of AK variants for themselves.

In 2014, High Standard began offering a Magpul edition of several of its AR-15s, the MOE Enforcer and Crusader AR-15. Interarms’ line is now expanded to include AK-T Tactical variants fitted out with Magpul furniture. An example of this is the rifle reviewed here.

The AK-T currently starts life as a Hungarian parts kit, including the under-folding stock found on our sample. A fixed-stock version of the AK-T is also available. To the kit the company adds enough American-made parts to provide its finished AKMs with 922r compliance, even if an imported magazine is used. That’s a nice touch given the number of imported magazines floating around. The standard-profile, American-made barrel is hard-chrome lined, Parkerized on the exterior and has a U.S.-built, slanted flash suppressor.

As the heart of any build, the receiver is critical. High Standard/Interarms uses a stamped American receiver, again with a Parkerized finish. High Standard manufactures its trigger group—the hammer, trigger and disconnector—not too far from its Houston, Texas facility. The trigger has a long takeup and a very nice trigger pull of almost 5 pounds. That’s a definite improvement over typical military triggers.

Compliance is enhanced with an American-made forend and pistol grip from Magpul. Magpul’s MOE AKM Hand Guard, rail cover and pistol grip are comfortable and effective drop-in replacements for stamped-receiver AK variants. Magpul handguards easily accommodate accessories with M-LOK attachments. A short piece (five slots) of anodized aluminum rail was also attached to the forend, and I bolted on a Crimson Trace Rail Master Pro unit with an integral light and laser. One 30-round Magpul PMAG accompanies the AK-T.

The under-folding stock is an excellent feature for those times when shorter is better, including when you may have limited storage capacity. With the stock folded, none of the AKM’s controls are blocked enough to prevent getting the rifle quickly into service. However, I discovered (for me at least) extending the under-folder stock is very much a two-hand proposition, with my dominant hand maneuvering the stock while my support hand retains control of the rifle.

Getting a rifle into action while swinging the stock open for maximum accuracy is the name of the game here. The safety requires a little more effort to disengage with the stock folded, but the charging handle and the magazine catch work fine. Getting the safety back on may be questionable depending on your finger size and is probably better done with the stock locked open.

M4 variants with their stocks fully collapsed usually have 33- to 35-inch overall lengths and are considered excellent for interior work. I see no reason why the AK-T would not be equally effective. In a vehicle, stowed with the under-folder extended or not, the AK-T should work just as well as inside cramped quarters, and the 7.62x39mm cartridge has a reputation for reliable peformance.

Range time is my relaxation during the process of an article. Complete the accuracy/velocity tests, yank the scope off, bolt on a red-dot or similar sight and begin giving the firearm a good workout. But occasionally the range portion is somewhat more stressful.

It seems like it has been raining in Texas since August bit the dirt. Water had soaked the soil of my normal ranges, making it difficult to get near the range. Finally, the skies cleared and there were a couple of days of sunshine to dry things. The minute I heard the range was just barely useable I used it! Due to the under-folding stock system, the AK-T does not feature a side rail optic mount. As a result, I could not mount an optic on the AK for the accuracy testing, leaving me with the standard AK sights.

My test ammo included Remington UMC and Winchester “white box” 123-grain FMJ loads and CorBon 123 DPX Hunting ammunition. The latter, however, might be a bit overpowered for defensive applications. Iron AK sights and aging eyes still managed to produce very acceptable groups off the bench. Several brands of polymer magazines, including Magpul’s PMAG, and several imported metal magazines were tested, with varying degrees of movement when latched in place. And yet they all worked perfectly! The AK-T ran without a hiccup during the entire testing phase for me.

It is hard to imagine a rifle with a stronger and more impressive pedigree than Kalashnikov’s creation. From its rugged reliability to its simplicity of operation to its broad use around the world, this is a design that has proven itself again and again. And, thanks to the efforts of High Standard/Interarms, civilian shooters have a fascinating new semi-automatic AK option for adding to their collection. Compact, powerful and reliable, the Magpul-enhanced AK-T Hungarian under-folder delivers when it counts. 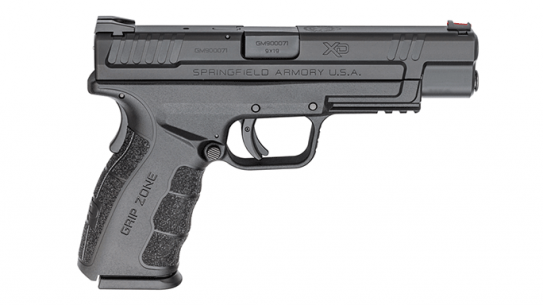 The all new XD Mod.2 Tactical from Springfield Armory, available in 9mm, features a...