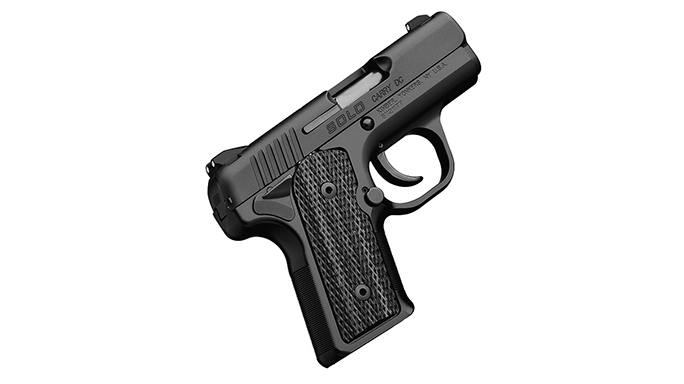 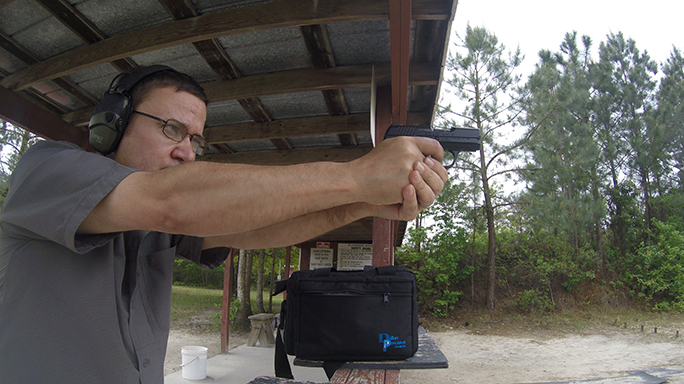 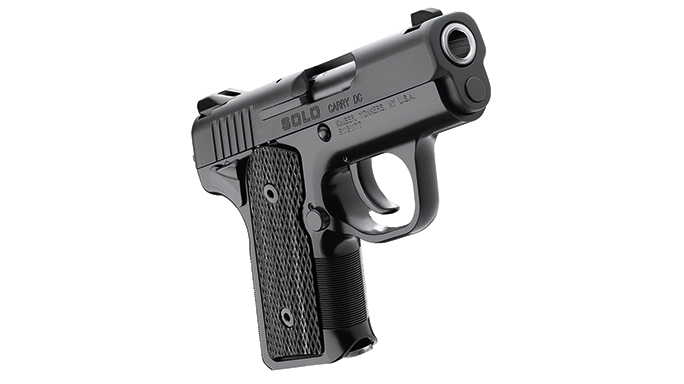 3 of 3
Gun Review: Kimber’s Solo Carry DC Handgun
The Solo Carry DC takes the basic Solo design and enhances it with a Carry Melt treatment, a durbale diamond like carbon coating (DLC) on the slide and barrel, and a self-lubricating KimPro II finish. 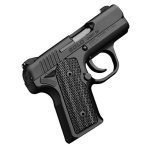 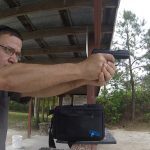 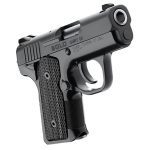 The Kimber Solo Carry DC offers more than just no-nonsense looks. Its enhancements make it a better pistol for those who choose to defend themselves through concealed carry. The Solo line of pistols, and the Solo Carry DC in particular, make you rethink what a subcompact pistol should be.

For nearly all manufacturers, building a subcompact 9mm pistol means building a pistol with a polymer frame. Kimber, however, doesn’t follow the pack. When Kimber released its Solo line of subcompact 9mm handguns in 2011, it decided to build the Solo with an aluminum frame. But while a full-metal frame is traditional, the assumption is that metal means extra weight. Not so in the case of the Solo Carry DC. The pistol weighs 17 ounces unloaded, which is less than most of the competitor’s polymer-framed, 9mm, subcompact pistols.

The Solo Carry DC takes the basic Solo design and enhances it with a Carry Melt treatment, a durbale diamond like carbon coating (DLC) on the slide and barrel, and a self-lubricating KimPro II finish. It also features grip strap serrations, checkered Micarta grips and Meprolight tritium night sights. A 1911 shooter can easily transition to a Solo and not have to relearn a new platform since Kimber chose to locate the thumb safety, slide stop and magazine release button in the same places as they are located on a 1911 pistol.

The Solo Carry DC, like all Solo pistols, uses a short-recoil operating system with locking lugs on the top side of the barrel that lock into the inside of the slide, a design that’s similar to a 1911, a CZ 75 or a Browning Hi-Power. There is no bushing, but the barrel is belled out at the muzzle to fit snugly into the front of the slide. A solid, two-piece recoil guide rod is used, which helps contributes to the Solo Carry DC’s accuracy.

The firing mechanism is described as a double-action-only (DAO) style trigger but with a striker-fired firing pin setup. The trigger pull really feels like a smooth, consistent, non-stacking double-action (DA) pistol. The lightweight aluminum frame is mated to a stainless steel slide and a stainless steel barrel. The pistol’s overall length is 5.5 inches and it is only 1.14 inches wide, making it very pocket friendly.

The gun’s 6+1 capacity makes the Solo Carry DC formidable in a defensive situation. The magazine is flush-fit, keeping the butt and mag well area snag-free. An extended eight-round magazine is also available.

The “DC” (Deep Cover) designation is well deserved, as this pistol   is very sleek and smooth, yet the slide offers plenty of purchase so it can be manipulated easily. That’s important since many subcompact 9mm pistols have stout recoil springs, the Solo Carry DC included. Small pistols and stout recoil springs can make racking the slide a chore, especially for someone with less hand strength. The slide has rear serrations similar to the serrations on Kimber’s 1911s, making it easy
to rack the slide.

The ejection port is large and flared, allowing empties to get tossed out by the external extractor easily. A loaded-chamber indicator port allows users to see into the chamber for a live round or an empty case. It is basically a tiny hole at the top of the breech, at the 12 o’clock position. Meprolight tritium three-dot night sights are dovetailed into the slide. The aluminum frame is serrated at the front and rear straps and offers an excellent grip without any abrasions. The thin grip panels consist of checkered Micarta. Like the straps serrations, they offer a solid grip with no bite. The Solo Carry DC’s magazine well is beveled, making it easier to load the single-stack magazine.

The slide stop works just like it does on a 1911, but it is much smaller is size. The manual thumb safety is also similar to a 1911, but again is much smaller and snag-free as well as ambidextrous. The thumb safety locks the trigger and slide. The smooth magazine release button is ambidextrous, too, and it takes a bit of effort to drop a magazine. This is a good thing since you do not want to accidentally dump a magazine during concealed carry.

The gun’s manual recommends a 24-round break-in period of firing at least of 124-grain or heavier bullets. I always read my guns’ manuals. In fact, I used to write technical manuals for the U.S. Navy. They are written and published for a reason. The Solo Carry DC was designed for optimal functioning using factory hollow-point (HP) ammunition with bullet weights between 124 or 147 grains, and Kimber recommends premium brands like Federal Hydra-Shok JHPs, Remington Golden Saber JHPs or Hornady TAP JHPs.

Kimber states that other types of 9mm ammunition may perform in the subcompact Solo, but lighter bullets may decrease the slide’s cycle time, which could mean a failure to feed, and inconsistent pressures in low-quality ammunition may compromise function. I have also been cleaning the Solo every 500 rounds per the manual.

The ammunition I had on hand satisfied the bullet weight requirement and included Atlanta Arms’ 147-grain JHPs, Winchester NATO 124-grain FMJs and Winchester 147-grain JHPs. My test pistol came with a flush-fit, six-shot magazine and an extended eight-shot magazine. Both magazines were constructed of stainless steel. The eight-round magazine used an extended polymer base that increased the grip length of the Solo Carry DC, giving it a full-sized feel with no need to curl my small finger under the butt. Some subcompact pistol magazines can be difficult to load, but I found the Solo Carry DC’s magazines did not chew up my thumb—even the last round was fairly easy to load. Racking the slide with the pinch-and-pull method required hand strength; it was easier to rack the slide with a full overhand grasp.

Firing a subcompact 9mm with heavy loads like those required in the Solo Carry DC can be rough on hands. Sharp recoil and the snappy cycling can rub fingers in and out of the triggerguard, making extended shooting not comfortable. In this respect, this pistol was a surprise. It had snap but was soft in the hand. With the extended magazine, I was able to better grip the pistol. My off-hand groups were also better, but the Solo Carry DC is meant for concealed carry, and I gave the flush-fit magazine its due with equal trigger time.

The Solo Carry DC fit my hand well, with my small finger comfortably curled under the butt. The trigger pull is very smooth and consistent throughout the press. There is a slight bit of take-up at the beginning of the press, then a smooth pull that averaged 7.3 pounds but felt much lighter. The pull is long, which is fine for a defense weapon that will most likely be used when your system is jacked with adrenalin.

Night sights make great sense on a concealed-carry gun since an attack will most likely take place in darkness rather than in daylight. Those three green, glowing dots are as fast to align in dim light as they during the daytime.

What surprised me is the Solo Carry DC is very accurate for such a subcompact pistol. I averaged 2.25-inch groups at 15 yards. When firing for speed, my groups opened up, but keeping center of mass was very doable due to the gun’s trigger, the textured grips and the fine serrations at the frontstrap and backstrap.

My hand stayed in place without having to “gorilla grip” the pistol. I always get a bit itchy with a two-hand hold on smaller pistols. I don’t like my non-shooting hand’s thumb so close to the muzzle, especially with a snappy recoil. This was not an issue, however, with this gun.

Since 2011, Kimber has helped redefine the subcompact 9mm pistol market, just like its 1911 series of pistols has redefined that category. With the Solo Carry DC, Kimber has created an accurate, well-designed pistol for concealed carry. 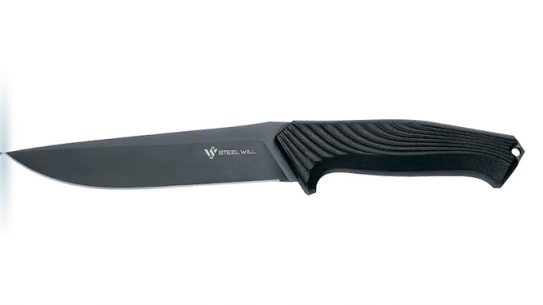 The all new Darkangel 900 from Steel Will Knives features a 5.83-inch blade made...