1 of 2
Gun Review: LWRC International’s TRICON MK6 Rifle
A shooter puts the TRICON MK6 through its paces with an Aimpoint Micro T-2.

After a very successful career in the Naval Special Warfare community, Jeff Gonzales founded Trident Concepts with a goal to build a training curriculum to prepare students for “the worst day of their life.”

He developed his program based on three principles. First, the tactics, techniques and procedures would be based on real-world battlefield experience. Second, high standards are an essential element in a training program. And third, “performance is what matters.”

Gonzales has some very specific preferences when it comes to gear. Like his courses, he is far more concerned about performance and reliability than appearances. This led Gonzales to partner with LWRC International on the TRICON series of rifles. The first TRICON MK6 was introduced in 2010 as a limited-edition, signature rifle. The series was extremely successful for both LWRC and Gonzales. Since then, Gonzales has become an ambassador for the company.

When LWRC introduced its new M6 Individual Carbine (IC) design, it was only natural that Gonzales would update his signature rifle to the new platform. The new TRICON MK6 is a limited-edition rifle, with 500 units in Sniper Gray and 500 units in Flat Dark Earth. This rifle combines LWRC quality and reliability with professional components as specified by Gonzales. To borrow a phrase from Gonzales, this rifle is designed to get you through “the worst day of your life.”

The IC platform was developed to compete in the military’s RFP for an improved M4/M16. The most notable improvement is the fully ambidextrous lower receiver. The left-sided magazine release is a large paddle that is recessed between two raised ribs. The ribs prevent an inadvertent magazine dump and provide a tactile guide that assists in locating the paddle. The bolt catch, on the right side, is a mirror image of the standard unit and is easily manipulated with the trigger finger. While the standard IC carbine is equipped with an ambidextrous safety, Gonzales specifically set up the TRICON with a mil-spec, left-side-only safety/selector. Based on his experience, Gonzales also specified a B5 SOPMOD stock for a positive mount and cheekweld.

Gonzales also requested that the MK6 be equipped with Geissele’s Super TRICON two-stage trigger. The Super TRICON is a non-adjustable variant of the popular Geissele SSA trigger. It is designed for close quarters and midrange engagements with a trigger pull of 4.5 pounds. My test rifle averaged slightly more than this at 5.25 pounds. The Super TRICON features a trigger bow that extends straight toward the bottom of the triggerguard by approximately 7 degrees for greater leverage. The face of the trigger is serrated to assist in proper placement of the trigger finger.

The LWRC Monoforge upper receiver is mated with a low-profile, 9-inch SPR rail that has threaded positions on the 3, 6 and 9 o’clock axes that allows the user to mount Picatinny rail sections where required. The short rail reduces the overall weight and improves the balance of the rifle. The rail, without the Picatinny accessory rails, measures approximately 6.125 inches in diameter, making it very comfortable to index. A Bravo Company Gunfighter Gen4 charging handle enhances operations in adverse conditions or while wearing gloves, while the Magpul MIAD pistol grip provides a solid purchase. Gonzales also prefers a vertical pistol grip to aid in mounting and indexing the rifle. The MK6 comes standard with TangoDown’s short vertical grip.

My test rifle featured a 14.7-inch, 1-in-7-inch-twist barrel with a permanently pinned GI flash suppressor. This configuration is the most compact rifle in a non-NFA configuration. The TRICON MK6 also features LWRC’s spiral fluting, which reduces weight, improves cooling and looks great.

When it came to sights, Gonzales specified the new Magpul MBUS Pro backup sights. The Pro sights feature all-steel construction and are finished in Melonite QPQ for enhanced protection from wear and corrosion. These sights also have an extremely low profile and lack the obtrusive base found on some designs. The rear sight has a small aperture that is 0.07 inches in diameter, while the large aperture is 0.19 inches. The square front sight post is protected by wings on either side. Adjustments for windage and elevation are made via dials that require no tools. Finally, our test rifle featured an attractive Sniper Gray Cerakote finish.

I was anxious to get some range time with the new Magpul Pro series sights. Prior to mounting any optic on the rifle, we zeroed the iron sights from the 50-yard bench. Adjustments, while firm, were easily accomplished with the thumb and forefinger. I found that the tapered rear tower provided excellent peripheral vision around the sight, especially when shooting with both eyes open. Using the Magpul sights, I was able to cluster five shots into a 2-inch group. I quickly realized that I had become far too dependent on an optic. The Pro sights gave me a much greater appreciation of just how effective proper iron sights can be.

After getting the BUIS zeroed, we conducted 100-yard accuracy testing using the Leupold Mark 4 2.5-8x36mm M2 tactical scope with a LaRue Tactical SPR mount. The TMR reticle and light-gathering capabilities make the Mark 4 series of scopes ideal for both sporting and law enforcement/military use. The illuminated reticle also provides a low-light capability, and the 2.5-8x magnification makes this an extremely versatile optic. The Mark 4 has become my standard glass for any AR evaluation. The LaRue Tactical SPR mount provides the proper elevation and will retain the scope’s zero when reattached.

We tested three favorite loads from 100 yards. The Hornady TAP series of ammunition is a favorite of the law enforcement community, with the 55-grain TAP being the most versatile load. The 55-grain TAP round averaged 2,857 fps from the 14.7-inch barrel and produced a group that measured 0.86 inches. HPR is a relative newcomer to the ammo industry but one that I have come to appreciate. HPR’s 60-grain V-MAX load averaged 2,422 fps and produced the smallest group of the day, measuring 0.77 inches. The final load was the RUAG Swiss P 69-grain Styx Action. This load is specifically designed for tactical use where overpenetration is a concern. The Styx Action load averaged 2,555 fps and produced a group that measured 1.28 inches.

After getting the “work” out of the way, we mounted Aimpoint’s new Micro T-2 for some quick, fun drills. The TRICON MK6 package is ideally suited for anyone who is serious about having a rifle for recreation, hunting or, as Gonzales says, “the worst day of your life!” 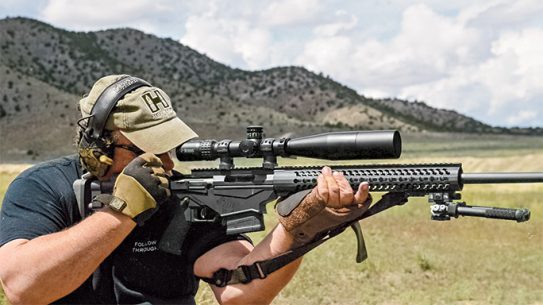 Gun Test: Ruger’s Precision Rifle Is on the Mark