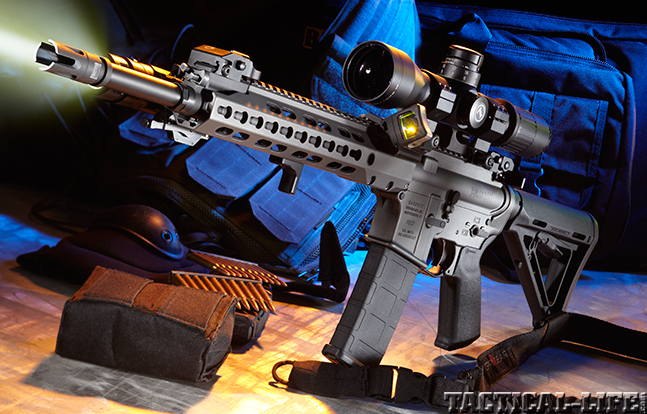 1 of 5
Custom Grade: Next-Gen Barrett REC7 GEN II
The REC7 Gen II has a sleek forend with KeyMod slots along the 3, 6 and 9 o’clock axes. 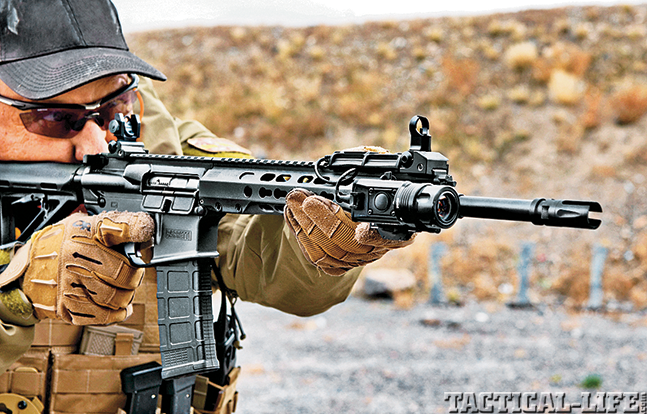 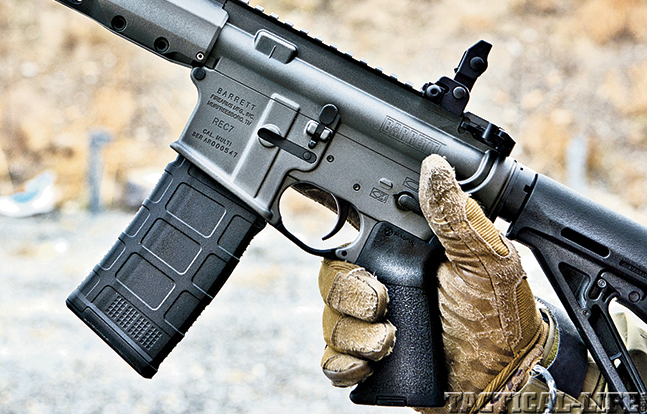 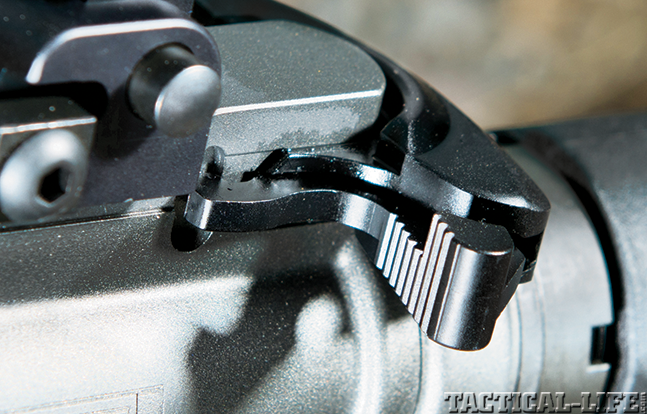 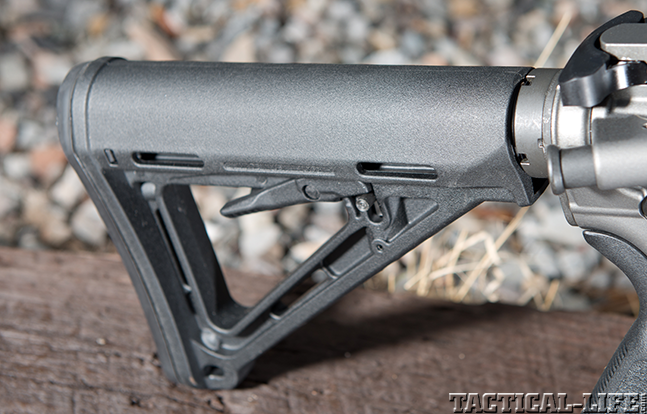 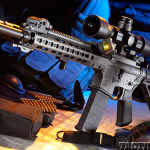 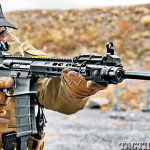 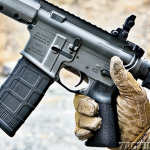 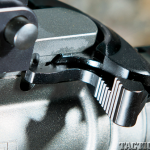 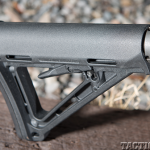 AR-style rifles are gaining some real traction in the hunting, target shooting and self-defense worlds. Unmatched ergonomics, tons of accessories and low recoil make them well suited to just about any mission. Chambered in 5.56mm NATO, the AR is great for working in close quarters, out to moderate distances and from unconventional positions. With the right equipment, AR-platform rifles provide excellent accuracy, reliability and almost zero recoil. If fast repeat shots are required, the 5.56mm AR is just about perfect. Even though my preferences for duty rifles often stray from this platform, when the time came for me to have a competition rifle built, I chose the AR-15 platform.

While many AR shooters are concerned about affordability, the market for high-quality rifles built to exacting standards is growing. Custom rifles built on milled receivers tuned to perfection are more common than ever. But getting this kind of quality without going to a custom maker can be difficult. Several well-known companies build super-high-quality rifles designed for hard use in any environment. I’ve tested too many to count, and the differences are clear—there is just far more attention paid to the details. It’s not about the bells and whistles—just a ton more focused work—and Barrett has joined that crowd with its new REC7 Gen II chambered in 5.56mm NATO.

A recent conversation with a Barrett representative in sales and marketing yielded the purpose behind the new rifle. Barrett wanted it to be of the highest quality, “not just another AR.” Rather than simply capitalize on the frenzy of AR buying, the company wanted to build the best rifle it could, yet keep it capable of real-world use. Barrett’s philosophy revolves around rugged reliability coupled with the ability to go “on duty” out of the box. Along with some innovative engineering, Barrett used only the best parts from proven companies in creating the REC7. Built with shooters in mind, it will run on the battlefield, the streets or in the backwoods. I was able to test one of the first pre-production models, and it was clear that Barrett came through with flying colors.

Upon the REC7 Gen II’s arrival, it was immediately evident that Barrett’s rep was not kidding when he called it a first-class rifle. This REC7 is nice—one of the nicest I’ve handled in a long time. The first thing I noticed is its feel and balance. Barrett designed and builds the new Gen II forend, which utilizes the popular KeyMod system and allows you to add rails and accessories as needed. The handguard is octagonal and nar-
row, providing a comfortable handhold, with a flat bottom where it attaches to the rifle’s upper receiver. A continuous top rail offers plenty of real estate for mounting sights, optics and accessories. The remaining surface is smooth with no sharp edges, making it very comfortable to hold. Reminiscent of a “melt” treatment on a carry pistol, the handguard sort of melts into your hand, yet it’s thicker in construction than most. Again, it has a really solid feel. KeyMod slots at the 3, 6 and 9 o’clock positions let you add all you would need in the way of accessories. Sling-cup slots with protective inserts are located at the rear on both the left and right sides of the forend.

The new handguard covers a Barrett-made, 1-in-7-inch-twist, chrome-lined, hammer-forged, medium-contour barrel that is chambered in 5.56mm NATO with M4 feed ramps for excellent reliability. Capping the barrel is Primary Weapons Systems’ Triad flash suppressor. A large nut threaded to the barrel secures the two-position gas block. With no pins or screws to come loose, the gas block can be removed using standard tools. A nice touch is the fact that the rim of a cartridge can be used to adjust the gas system, with positions for standard firing, suppressor use and removing the system.

Forged from 7075 aluminum, the upper receiver houses Barrett’s high-strength 9310 steel bolt and one-piece carrier. Coated for smooth operation, it uses an anti-tilt design. The charging handle is a BCM Gunfighter unit. Precision Reflex flip-up sights sit atop the upper receiver and forend, providing some of the best iron sights on the market.

Finally, we have the rifle’s finish. The entire rifle is coated in a nice grey Cerakote. Rather than shop it out or apply it improperly, Barrett built a state-of-the-art facility to apply and bake it correctly. Applying Cerakote is not that simple, and baking it properly is critical. Factory-trained Cerakote professionals came out and assisted in the setup and provided expert training. The effort paid off, as I’ve never seen a better factory-applied finish. The coverage is even and there are no missed spots—it is incredibly well done.

Initially available in either 5.56mm NATO or 6.8 SPC, Barrett ships the REC7 Gen II in a really nice black nylon rifle case with Barrett markings. My test 5.56mm also came with one short Picatinny rail for the KeyMod handguard along with two Magpul Gen 2 polymer magazines. All you need to add is a sling and you’re ready to go.

I completed the vast majority of this test using the iron sights and 55-grain Federal XM193 FMJ ammunition. Precision Reflex sights, among the best you can buy, are some of my favorites. The front sight, completely enclosed in a ghost ring, allows for very fast close-quarters applications. Centering the front circle inside the rear aperture puts shots dead center at close range. At longer ranges, it allows for solid holds, especially on nearly round targets, similar to those often encountered in the real world. I also tested the handguard by attaching several lights.

The accuracy portion of the evaluation started with just the iron sights. I shot the REC7 from prone using a railroad tie as a front rest—pretty “field expedient” and more in keeping with what you may find in the real world. Silver State Armory’s 77-grain OTM ammo produced the best group at 1.75 inches, with Hornady’s 75-grain match ammo a close second. No slouch with the 55-grain ammunition, DoubleTap’s 55-grain FMJ BT grouped at just under 2 inches. Nothing grouped outside 2 inches. Considering the real-world testing without optics, the REC7 is about as accurate as an AR can be. It was also consistent, something that is not always true with piston-driven AR rifles.

Next, I mounted a 3-18x44mm Leupold Mark 6 scope and moved to a proper rest to wring out the best possible accuracy from the REC7 Gen II. Here the Barrett really shined. The heavier bullets continued to rule, with the DoubleTap 77-grain OTM taking the day at just a tad over 0.6 inches. DoubleTap’s match loads are pretty much handloads—the company pays great attention to detail in the manufacturing process, and it shows. Its 55-grain load, more in keeping with factory ammunition, shot well with iron sights and was very accurate using optics. Overall, the REC7 Gen II is incredibly accurate and versatile.

Shooting from kneeling at 50 yards, the REC7 was well balanced and maintained superb accuracy. Sporting a heavier barrel, you might expect the carbine to be heavy, but that’s not the case at all. It rested nicely and balanced perfectly in my hand, allowing for solid accuracy from a braced kneeling position. Hits on a 6-inch steel target at a bit over 100 yards from kneeling were almost too easy.

Barrett has tuned this rifle perfectly; it barely moves, making repeat shots fast. The PWS Triad flash suppressor offers some muzzle control, making it an excellent choice for duty, home defense or hunting. Working around my truck, barricades and other barriers at 25 yards, it provided excellent control even on rapid fire. Working in and around real-world obstacles, the REC7 was excellent. Its superior balance was especially clear inside a shoothouse. It pointed quickly and worked around corners well.

This rifle seemed incredibly soft-shooting as a piston gun. It felt more like a direct-impingement rifle. Just to be sure, I tested a couple of my other piston guns side by side, and it took the day. It even rivaled my custom-tuned direct-impingement rifle. Barrett equips the rifle with an H2 buffer, but the gas system is also set up well. Most AR rifles are way “over-gassed” to work with all kinds of ammunition. This rifle was tuned incredibly well—it was fast cycling and 100-percent reliable. Its balance, coupled with the Geissele trigger, Triad flash suppressor and smooth operation, made for accurate, rapid fire. The REC7 just did not move—almost like shooting with a competition muzzle brake but without the annoying noise and debilitating overpressure—making it perfect for duty, hunting or whatever role you have in mind.

If Barrett was looking to avoid “just another AR,” the REC7 Gen II has accomplished that task with flying colors. To make sure it wasn’t just me, I gave several friends the chance to handle and shoot this rifle. It really stood out to everyone handling it. Everyone pointed to the rifle’s attention to detail and feel. One officer stated, “It just kind of melts in your hands.” Another told me it was easy to make it a simple “extension of your arms.” They all commented on its “perfect balance.” A good friend, new to guns and rifles in particular, said, “You can just feel the quality in this rifle. There is some serious attention to detail here.” That pretty much says it all, especially when you consider that he is a highly trained engineer.

The REC7 is an AR, and there may be nothing earth-shatteringly new here, but it’s built with Barrett’s attention to detail. It’s a perfect example of how simplicity itself can be observed as standing out. Built without adding bells, whistles and gadgets—just solid and proven components—the REC7 Gen II really stood out to everyone that handled it. While a few factory rifles have passed through my hands that are comparable, none have been better. The build quality comes very close to that of my handmade custom rifles. If you are looking for a solid rifle built for hard use by a proven provider of combat weapons, check out the REC7. One thing is certain: It will be hard to send this one back! 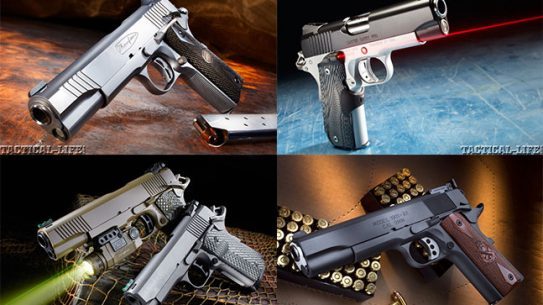 Rounding up some of this year’s most exciting and reliable 1911 pistols, all built...