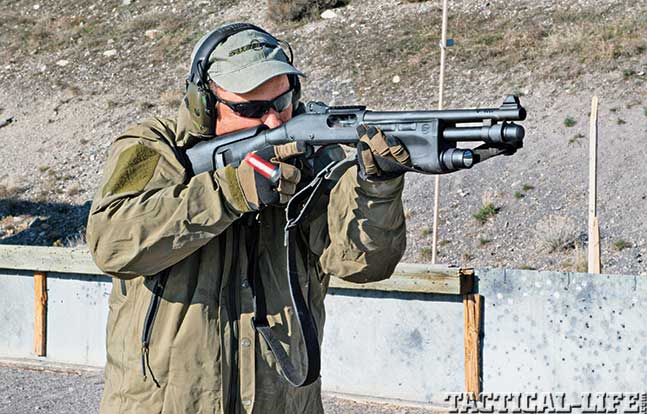 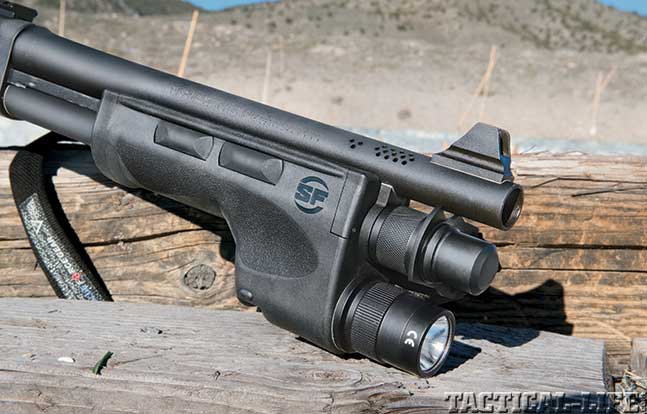 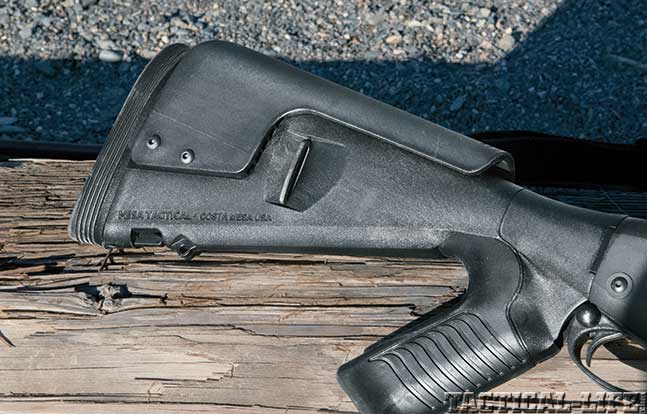 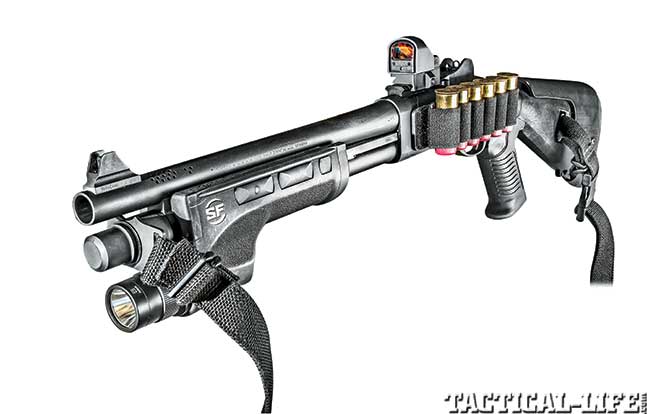 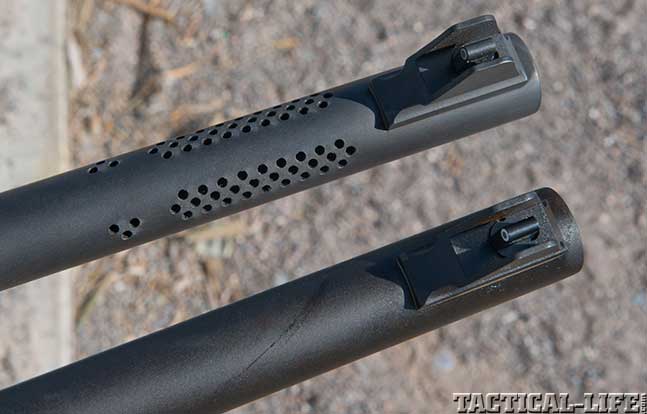 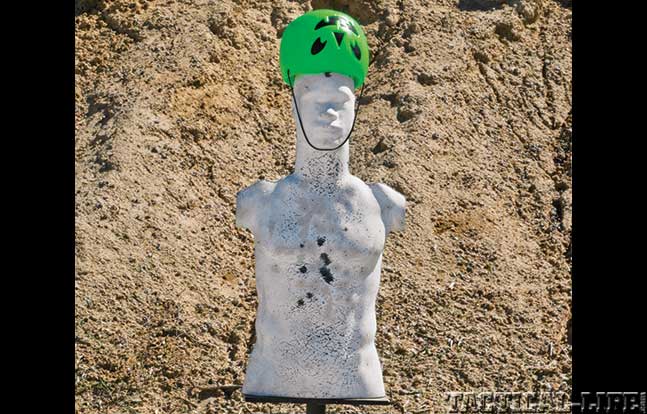 6 of 6
Gun Review: Remington’s 870 Police Magnum
Bill Murphy uses a motorized target that not only provides realistic movement side to side, but it also charges you, providing practical, real-world training. 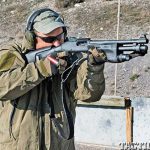 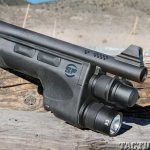 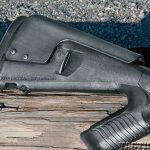 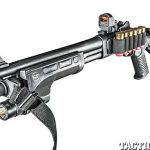 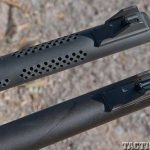 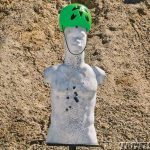 Having spent 20-plus years as a police officer, with much of that time on a SWAT team, I tend to focus on a weapon’s function outside the range. Sure, “new and improved” is great, often enhancing an individual’s ability to do their job and survive violent encounters—but not always. Experimentation is great for the field of play, but the field of battle requires absolute reliability, simple operation and proven effectiveness. No weapon available today meets that requirement better than a pump-action shotgun. It won’t win many matches, but it has won a ton of fights and remains a viable and proven combat and self-defense weapon. Recent interactions with Hans Vang of Vang Comp Systems (VCS) and Bill Murphy of Firearms Training Associates brought that to the fore. I came away with a retrofitted Remington 870 12 gauge and some expert training to truly test it.

Hans Vang has been building combat shotguns for close to 40 years now. By lengthening the forcing cone, back-boring the barrel and adding compensating ports, his company improves patterning and felt recoil. Even prior to the advent of tactical buckshot, Vang Comp guns tightened patterns considerably. The VCS treatment reduces felt recoil and muzzle rise, allowing for impressive accuracy.

Vang Comp Systems has also worked out some of the best accessories for a combat shotgun. The company’s ghost-ring sights are well built and easy to pick up in a fight. Many of its innovations for Remington and Mossberg shotguns epitomize simplicity and proven reliability. VCS-modified shotguns have been riding next to officers for a couple of decades now, making them about as proven as it gets.

My 14-inch-barreled Remington 870 Police Magnum has been dedicated to breaching duties. A department trade-in, the previous owner went crazy with a drill trying to attach Picatinny rails. Luckily, Remington’s 870 Police Magnum is built like a tank. It’s pretty well used and has seen several reconfigurations over the years, so it was the perfect donor for this project.

Vang Comp welded up the unused holes and installed a ghost-ring rear sight and a Picatinny top rail. The company also outfitted three barrels for the 870. A 14-inch, ported barrel is the primary tube. Registered as a short-barreled shotgun (SBS), it will stay in this configuration most of the time. An 18-inch, ported barrel was supplied for training schools or long-range slug shooting, and the third barrel is an un-ported, 18-inch tube built for the Heavy Metal division of 3-Gun matches. Each barrel was given VCS front sights with tritium inserts as well as the company’s back-boring and accuracy enhancements. I chose to keep the shotgun’s Mesa Tactical Urbino pistol-grip stock, and SureFire provided a DSF-870 lighted forend. Vang Comp installed its extended safety, magazine tube extension and stainless steel follower. Finally, I added a new GG&G sidesaddle as well as a Blue Force Gear sling.

Bill Murphy has served for over 30 years as a police officer in California, with most of that time spent working in Los Angeles. He was a SWAT officer, an academy instructor and a long-time range master at Gunsite Academy, and he currently serves as a reserve officer with the Los Angeles County Sheriff’s Department. Murphy took over the SureFire Institute several years ago and has been running it ever since. While the SureFire Institute focuses on military training, its affiliate, Firearms Training Associates (FTA) trains everyone else, including civilians and law enforcement personnel. This is where I’d put my shotgun to the test.

I spent two days at Murphy’s dedicated FTA facility at Raahauge’s Shooting Enterprises in Corona, California. The first day I attended the basic “General Shotgun” class, which is designed for those new to the system. Several in this class had purchased self-defense shotguns and used them at a range, but with no specific training. General Shotgun provides the basic skills to safely load, unload and run your shotgun in a more realistic environment. Students with little or no experience come away feeling more comfortable operating their shotguns.

The next day, the “Advanced Shotgun” class builds upon the basics and provides skills more commensurate with a real deployment or use in a self-defense situation. Along with shooting on the move, you engage moving targets, train with an indoor simulator and use a live-fire, outdoor shoothouse. New shooters leave prepared to advance on to other tactical shotgun courses.

I ran the VCS-modified Remington 870 through the FTA courses with the 18-inch, ported barrel. It was an opportunity to see how the longer barrel worked at ranges as far as 100 yards, and the Advanced class requires you to shoot some sporting clays, so this barrel just seemed the best fit. Once back home, I installed the 14-inch barrel and put it through its paces. It also provided an excellent comparison between the two barrels.

Patterning during the General Shotgun course proved instructive. Federal’s 8-pellet LE133 00 buckshot is my preferred round for pump shotguns. Over a broad range of shotguns, it produces one of the tightest patterns out to 25 yards. To my surprise, that was not the case with the Vang Comp shotgun. Bill Murphy indicated that Federal’s 9-pellet buckshot tended to work best out of Vang Comp guns in his experience, and he was proven correct. Federal’s 8-pellet LE133 00 buckshot (1,145 fps) patterned at about 9.5 inches at 25 yards. Moving to the 9-pellet LE127 (1,325 fps) 00 buckshot, the patterns shrunk to 9 inches or so. Using Hornady’s 8-pellet Reduced Recoil TAP (991 fps), the patterns tightened to just less than 8 inches at the same distance. Compared to patterning prior to the VCS improvements, it was all consistently tighter by about an inch. Even shooting at 50 yards, it was possible to get at least 50 percent of the pellets on steel.

Back at the home range, the 14-inch barrel patterned about the same. This also gave me the chance to fire some of the 9-pellet Federal LE132 00 buckshot (1,145 fps), which produced very tight patterns at 25 yards. In fact, it consistently created 9-inch patterns at that range, a testament to the accuracy of buckshot these days. One of Federal’s most popular tactical rounds these days is its #1 buckshot, with 15 pellets at 1,100 fps. Depending on application, it has some advantages. At 25 yards, this load created 10-inch patterns, which is plenty tight, but at practical ranges in your home, it also offers low recoil, low flash (especially in my test shotgun) and puts 15 projectiles on target. This is just about perfect for many home-defense applications. For police work, I’d still prefer to use 00 buckshot, but either way this Vang Comp shotgun patterned it all very well.

Accuracy with slugs is always a bit controversial. It is not like shooting a rifle. You cannot lock a 12 gauge in a vice and shoot it, and without a rifled barrel it remains a smoothbore, where accuracy is more about the shooter than the gun. Having used shotguns for decades, my experience helps. At 25 yards with the 18-inch barrel, this gun placed Fiochi low-recoil slugs (1,300 fps) into an ever-growing hole using the iron sights. The 14-inch barrel did the same thing with the Fiochi slug as well as Federal’s LE127 rifled slug (1,300 fps). Moving out to 50 and then 100 yards, the shots stayed on a 14-inch steel target, creating a glob of lead in the center. This also showed the merit of the barrel porting. The felt recoil was noticeably reduced as velocity increased. Shooting Hornady’s Light Magnum (1,600 fps), it was almost as comfortable as my AK-based VEPR.

Using the 18-inch barrel in my range’s shoothouse reminded me of the benefits of a 14-inch barrel. The shotgun worked, but that extra length makes a difference working around corners and inside rooms. Moving though the shoothouse, the 14-inch barrel was much easier to wield, especially in full kit. For tactical use, especially as part of an entry team, this is the ticket.

Many shotgun experts (including Bill Murphy) prefer a standard stock, but I prefer one with a pistol grip for tactical use. Mesa Tactical’s Urbino is my favorite. It allows you to get a short length of pull, has a nicely padded pistol grip, and the cheekrest can be adjusted for using ghost rings, red dots and other optics. This test only solidified my choice. Using a pistol grip has never hampered my deployment of a shotgun; in fact, it makes it easier to me. Most of my experience with a shotgun is tactical in nature, so it is easily the most comfortable.

This was the first time I got to shoot a fully Vang Comp-modified shotgun with any real round count, and it was impressive. Despite all the new stuff out there, sometimes the “tried and true” is the best option. Vang Comp’s workmanship was excellent; the shotgun was accurate and worked perfectly. The VCS upgrades proved useful. Every enhancement made it a better shotgun for use in the real world.

SureFire’s new DSF-870 forend worked well, and the light was very powerful. A homeowner should have no problem using the DSF-870 on home-defense duty. All in all, it was a great test, and Vang Comp turned my hammered and mangled Remington 870 Police Magnum into a really nice shotgun that is perfectly suited to home-defense, entry and patrol operations. A Remington 870 of some sort or another has been by my side for decades, and that will not change—it’ll just be this one! 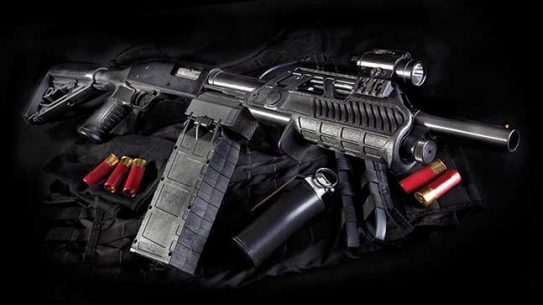 The Adaptive Tactical Venom Box Magazine Kit allows for the use of 10-round detachable...