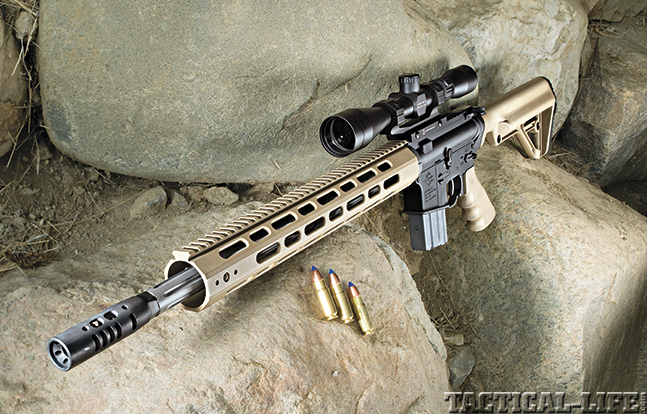 1 of 6
Rock River Arms’ X-1 .458 Stops Big Game in Its Tracks
RRA’s new X-1 harnesses the .458 SOCOM, a sledgehammer of a round created to meet the needs of U.S. Special Operations Command that will give you the power to take down most North American game. Shown with a Leupold Mark AR scope. 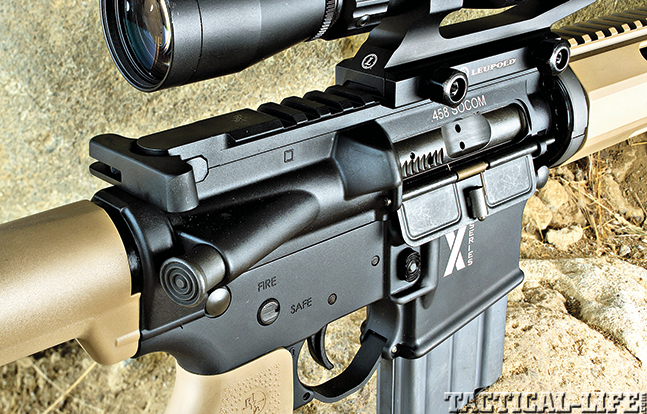 2 of 6
Rock River Arms’ X-1 .458 Stops Big Game in Its Tracks
The X-1’s upper receiver is modified to handle the .458 SOCOM. The ejection port is widened to provide for greater reliability. 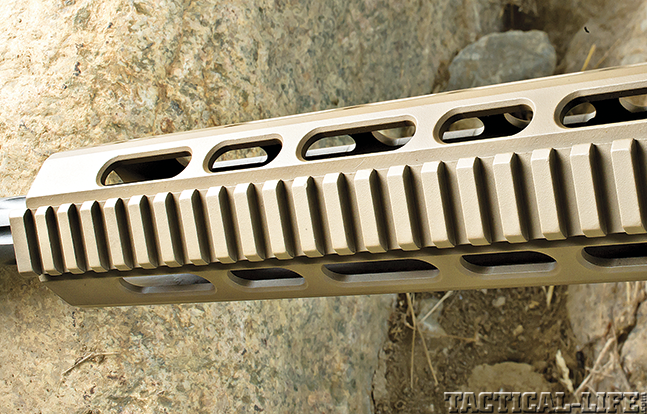 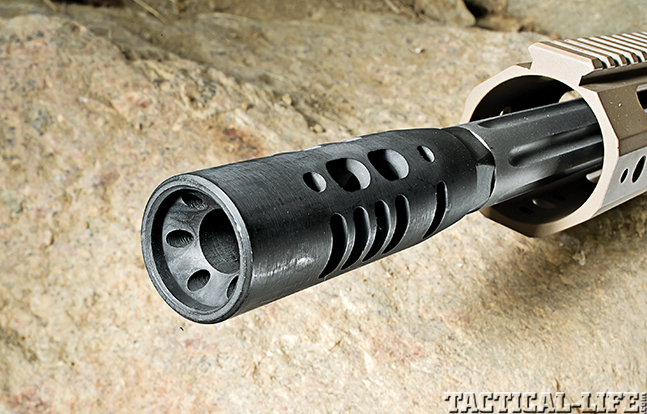 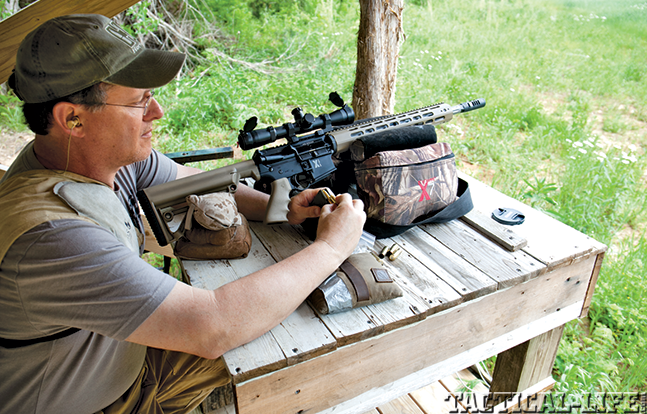 5 of 6
Rock River Arms’ X-1 .458 Stops Big Game in Its Tracks
The X-1’s upper receiver is modified to handle the .458 SOCOM. The ejection port is widened to provide for greater reliability. 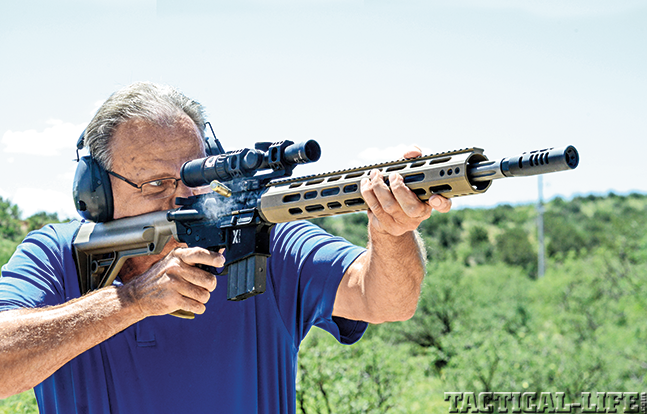 6 of 6
Rock River Arms’ X-1 .458 Stops Big Game in Its Tracks
RRA’s new X-1 harnesses the .458 SOCOM, a sledgehammer of a round created to meet the needs of U.S. Special Operations Command that will give you the power to take down most North American game. 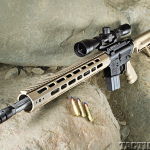 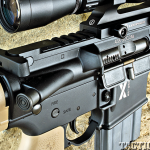 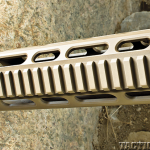 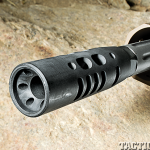 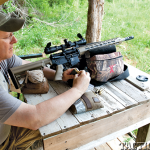 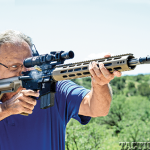 Marty ter Weeme’s .458 SOCOM brainchild has been with us for nearly 14 years, and its power and compatibility with the AR platform has created a sizable following among shooters. To feed the need for more rifles chambered in that caliber, Rock River Arms (RRA) has added the new X-1 rifle to its LAR-458 lineup.

Marty ter Weeme, the owner of Teppo Jutsu, designed the cartridge in 2000, and Tony Rumore of Tromix was contracted to build the first .458 SOCOM rifle in February of 2001.

Rock River Arms’ new LAR-458 X-1 rifle starts with forged upper and lower receivers. To get a handle on this heavy hitter, the lower comes with a Hogue rubber pistol grip and RRA’s Operator A2 stock, both of which came in Flat Dark Earth on my test rifle. Another one of my favorite RRA features is the Star safety selector, which is more user-friendly and easy to manipulate. The lower also features RRA’s two-stage trigger, which provides a crisp, smooth break. Housing the trigger is the company’s winter triggerguard.

The X-1 wears an 18-inch, fluted, stainless steel barrel. The barrel has a 1-in-14-inch twist rate and is cryogenically treated and bead blasted. At the muzzle, an RRA Hunter muzzle brake helps tame recoil, which translates to faster follow-up shots on target. The muzzle has 5/8×32 threading. To drive the action, the low-profile gas block diverts the necessary energy from a wide range of factory and handloads. Surrounding the gas system and barrel of the X-1 is RRA’s free-floating, extended TRO-XL handguard—also in Flat Dark Earth on my test model—which provides a full-length Picatinny rail that mates up with the flattop upper receiver’s. All together, the carbine weighs 8.7 pounds unloaded and has an overall length of 39.5 inches.

Feeding a .458 SOCOM rifle takes special consideration. When it comes to handloading, one of the first things to keep in mind is that this rifle cartridge takes pistol primers. Although I’ve never had problems while using pistol primers, they present a small risk of producing a “runaway” when they slam-fire upon feeding. Another aspect of brass care that can make a difference is neck tension when seating the bullet. This has a direct impact on consistent bullet release and subsequent accuracy. Cases should be trimmed so that they are equal in length, and annealing would provide yet another measure of consistency.

To put the RRA LAR-458 X-1 through its paces and create a benchmark for my hand­loads, I tested several factory loads from Southern Ballistic Research (SBR). These factory loads, as well as the handloads, were fired through an Oehler 35P chronograph to record velocity data. Accuracy testing for factory loads consisted of five-shot groups at 100 yards, while handloads were recorded at 50 yards. For the range work, I added a Leupold 2.5-8x36mm Mark 4 scope.

The first factory load from SBR I used was its 300-grain jacketed hollow point (JHP). The average velocity, recorded at a distance of 15 feet from the muzzle, was 1,632 fps, and the standard deviation 18 fps. The smallest five-shot group measured 1.66 inches. The 405-grain SBR load averaged 1,448 fps, with a standard deviation of 15 fps. This rifle didn’t like this load, but it did produce a glimmer of hope. The smallest five-shot group measured 6 inches, but it would typically put three shots into a cluster smaller than 1.5 inches.

SBR’s 350-grain FMJ rounds flew downrange at an average of 1,546 fps and produced a consistent standard deviation of 7 fps. At 100 yards, the smallest group with this load measured 2.77 inches. SBR’s 300-grain Solid Brass load produced an excellent 1.25-inch group at 100 yards, and its average velocity was 1,487 fps.

Now that I had a baseline for factory loads, I tried a variety of powders and bullets to come up with a solid handload recipe. I got some surprises with my starting loads, with bullets not even making it to the target at 50 yards. I recorded several attributes of each load that may prove beneficial to others crafting their own loads. The first load consisted of 26.2 grains of H110 driving a 344-grain Lee cast bullet. This bullet is designed to use a gas check, but I left the gas check off of some bullets to compare results. It averaged 1,342 fps while producing a rather high 56-fps standard deviation. Inspecting the spent casings revealed no signs of excessive pressure. This handload produced a crisp recoil impulse and ejected cases at about 2 o’clock of the bore axis. The fired cases were blackened, indicating powder gas leakage back into the chamber. The rounds prepared without gas checks produced five-shot groups at 50 yards that hovered around 5 inches, with the smallest measuring 4.86 inches. The bullets with gas checks installed fared much better, with the smallest group measur­ing approximately 1.68 inches.

The next cast bullet load was an attempt at finding a subsonic recipe. I used a 425-grain, gas-checked Lee bullet. A 26.6-grain charge of IMR 4198 averaged 1,035 fps and a standard deviation of 10 fps. Its extreme spread ranged from 1,020 to 1,050 fps, which stayed subsonic. It was also amazingly accurate, with several bullet holes connecting among five-shot groups. The smallest measured 0.98 inches center to center. Driving this bullet faster with 26.3 grains of H110 produced negative results. It achieved 1,364 fps, but groups opened up to 3.5 inches.

I created another subsonic load with a 405-grain plain-base RCBS mold, which is the same profile as the standard .45-70 Government bullet. A 16-grain charged of H110 only achieved an average of 784 fps, but it did produce a 1.43-inch group.

Swapping over to a 500-grain Hornady round-nose bullet driven by 18 grains of H110 produced a velocity of 919 fps. It also produced a single 1.46-inch hole. The round’s combined overall length, at 2.316 inches, was too long for magazine feeding, which RRA specifically warns against.

The .458 SOCOM is a satisfying round to load, and it puts a lot of downrange stopping power on target. It is a shooter’s dream, and the Rock River Arms LAR-458 X-1 is a powerful, short-range whitetail rig for fans of the AR platform. 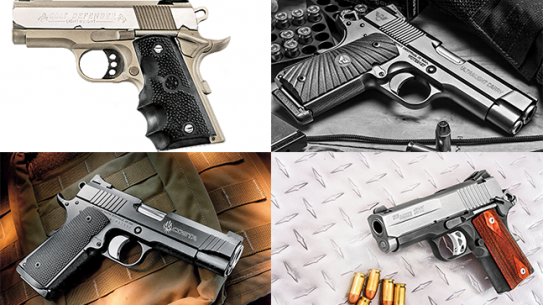 The officer 1911 is the smaller concealable side of the classic big-bore -- and...