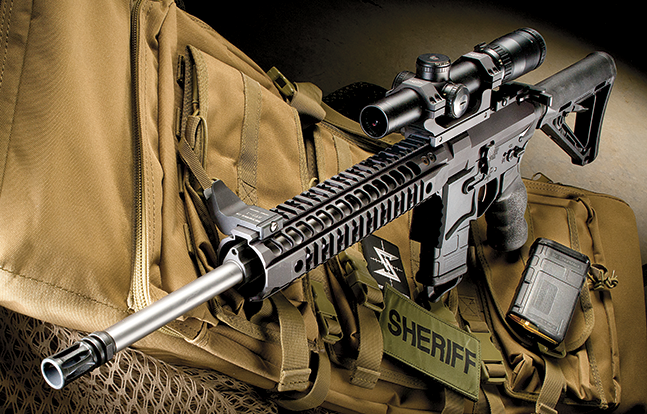 1 of 7
Seekins Precision’s CBRV1 Is .223 Wylde at Its Finest
The CBRV1 is packed with accuracy-enhancing features to give LEOs the upper hand. Shown with a Bushnell 1-6.5x24mm Elite Tactical SMRS scope and Dueck Defense RTS sights. 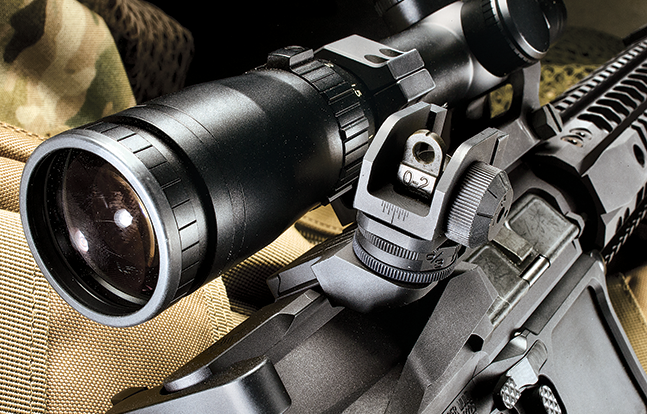 2 of 7
Seekins Precision’s CBRV1 Is .223 Wylde at Its Finest
The top rail provides plenty of space for mounting optics and sights, such as the Bushnell SMRS riflescope and Dueck Defense Rapid Transtion Sight (RTS). 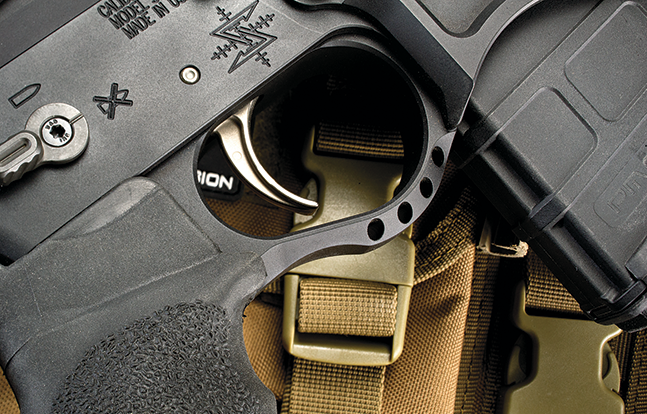 3 of 7
Seekins Precision’s CBRV1 Is .223 Wylde at Its Finest
Seekins uses an ALG-ACT trigger, which retains the feel of a mil-spec trigger without the usual grit and pull weight. 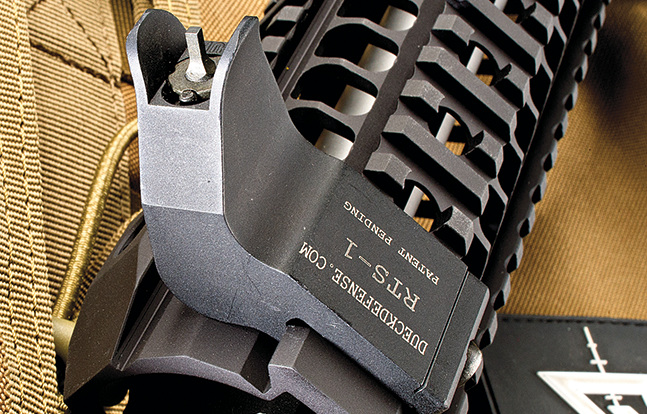 4 of 7
Seekins Precision’s CBRV1 Is .223 Wylde at Its Finest
The Dueck Defense RTS provides LE shooters with one of the quickest transition possible from optical to offset iron sights.

5 of 7
Seekins Precision’s CBRV1 Is .223 Wylde at Its Finest
Seekins equips the CBRV1 with a 16-inch, stainless, match-grade barrel with a bead-blasted finish and a Melonited flash suppressor. 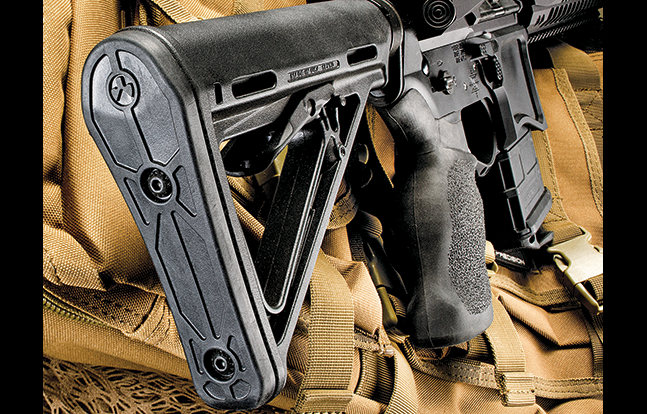 6 of 7
Seekins Precision’s CBRV1 Is .223 Wylde at Its Finest
For better handling and control, the CBRV1 comes with an adjustable Magpul MOE buttstock and an Ergo pistol grip. 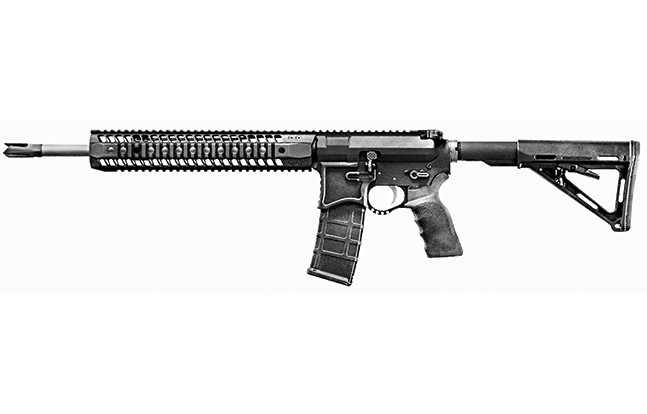 7 of 7
Seekins Precision’s CBRV1 Is .223 Wylde at Its Finest
The CBRV1 is packed with accuracy-enhancing features to give LEOs the upper hand. 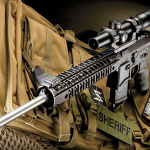 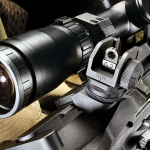 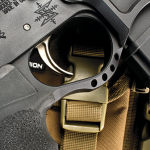 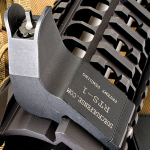 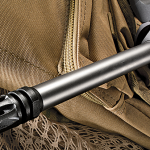 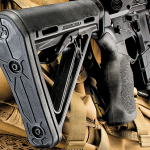 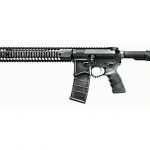 Seekins Precision first came to my attention with its 300 Blackout upper. Ernie Bray at Red Creek Tactical spoke very highly of the upper’s quality and design. Testing proved just how correct he was.

Seekins has some of the nicest looking and crafted billet parts on the market. So when the opportunity to test a complete Seekins rifle presented itself, I jumped on it. The CBRV1 has a .223 Wylde chamber, and I wanted to see if the quality aesthetics translated to superior performance and accuracy on the range.

Bill Wylde is a well-known gunsmith and long-time NRA rifle competitor. He remains one of the premier precision AR-platform rifle-builders. He was at the fore of the development of the AR match rifle. In the 1980s, AR-platform rifles in 5.56mm NATO began to appear far more often in NRA rifle competition championships. As our armed forces’ primary rifle, it slowly replaced the 7.62mm M1A. The 5.56mm AR uses less-costly ammunition and is much easier for younger shooters to use and, in many cases, for competitors to shoot accurately. At closer ranges, the gun has some advantages—it was not initially intended for 600-yard ranges, as 5.56mm match ammunition had yet to be developed with real consistency. In order to get the best possible accuracy, Bill Wylde developed a reamer for a match-specific chamber in 1984 that currently bears his name, the .223 Wylde.

“The CBR was built for the demanding requirements of law enforcement and the military.”

The .223 Wylde chamber is an adaptation of a NATO reamer that was modified in the throat and chamber neck. The free bore, the area just in front of the chamber with no rifling, was narrowed to 0.224 inches. Chambers built to shoot any ammunition on the battlefield tend to be generous, and since the chamber guides the bullet into the rifling, narrowing a military chamber can increase accuracy. In the .223 Wylde, the throat angle and length were changed to accept longer match-grade bullets. Note that bullets designed for accuracy at range tend to be longer, and seating them out further allows for increased case capacity. Although this may require a magazine designed to accept longer bullets, doing so can significantly increase accuracy at longer ranges.

Although several similar chambers are available, the .223 Wylde is fast becoming the most popular. Given its ability to shoot 77-grain OTM bullets as well as other heavier rounds, it’s no wonder. The first rifle I used with this chamber was regularly putting five rounds of 77-grain OTM into 0.4-inch groups at 100 yards. Using Federal’s 69-grain Match ammo yielded similar accuracy. With the proper barrel twist rate, it maintains solid accuracy with lighter bullets, and that makes it an excellent chamber for patrol rifles and DMRs when you consider the prevalence of Speer’s 55- and 62-grain Gold Dot or Hornady’s 60-grain TAP rounds in the police world. The .223 Wylde is incredibly versatile and popular, and many manufacturers these days make a model with this chamber. The CBRV1 from Seekins is an excellent example.

The CBRV1 was built for the demanding requirements of law enforcement and the military. Utilizing the latest in Seekins parts, it is designed to be accurate, reliable and suitable for most any deployment. Seekins starts with its SP223 billet lower receiver, which is easily one of the best built on the market. Designed from the ground up for tactical shooters, it encompasses a number of features. CNC-machined from a billet of 7075-T6 aluminum, the SP223 lower is incredibly strong. The oversized winter triggerguard leaves plenty of room for gloved hands, while the Ergo grip is comfortable and solid. The lower is also ambidextrous, so the bolt release and safety selector are easy to access on both sides. The safety selector is a BAD unit with short-throw levers. The magazine well’s unique design provides for fast reloads, and it accepts several magazine types, including Magpul PMAGs and SureFire 60/100-round magazines. The lower is Type III hardcoat anodized for protection from the elements.

Seekins equips the CBRV1 with an ACT trigger from ALG Defense, which retains the feel of a mil-spec trigger without the usual grit and pull weight. With a trigger weight of 5 pounds, it stays within many department policies yet remains smooth and predictable. Magpul’s MOE stock with an H-buffer and spring complete the lower.

My test rifle’s billet-crafted upper receiver featured a BAR quad-rail measuring 10 inches in length and leaving half of the gas block exposed. Current-production CBRV1 rifles come with 12-inch handguards that cover the gas block completely.  Each rail is nicely sculpted with no sharp edges. Maintaining a slim overall design, the rail’s 1.8-inch inside diameter allows most suppressors to fit inside. The BAR features anti-rotation tabs to keep everything in place. The seamless top rail allows for the addition of optics or red-dot sights, and the quad-rail’s free-floating design uses a standard barrel wrench and a billet aluminum barrel nut. An adjustable gas block is attached to the 16-inch stainless barrel, which has a 1-in-8-inch twist rate. A standard A2 flash suppressor was supplied, but the CBRV1 will accept any standard 5.56mm unit. As mentinoed, the rifle has a .223 Wylde chamber along with M4 feed ramps. The gas tube and mil-spec M16 bolt group are both coated in Melonite. A BCM Gunfighter Mod 3 charging handle completes the bolt group.

Given the accuracy potential of this rifle, I attached a Bushnell Elite Tactical 1-6.5x24mm SMRS scope using a one-piece Yankee Hill Machine mount. This scope features incredibly clear glass and a reticle designed for tactical operations. The BTR-1 reticle provides bull-drop compensating (BDC) marks for the 5.56mm round out to 600 yards. A large horseshoe encompasses a dot in the center for aiming on the move—both the horseshoe and dot are illuminated. Windage and elevation are graduated in 0.1 mils, and the illumination dial has two night-vision settings and nine regular settings. In between each position and setting is an off position, allowing for one-click operation.

For backup iron sights I installed a set of Dueck Defense’s Rapid Transition Sights (RTS) . Machined from 7075 bar stock, they are strong, simple and offset 45 degrees to work around a mounted optic. They’re very low profile and are graduated in 0.5-MOA increments for both windage and elevation. The sights maintain the same bore height as standard sights, and the system as a whole provides a no-nonsense backup sighting system for optics-equipped rifles, without the worry of batteries or screens.

I fed the CBRV1 a diet of ammunition most often seen in law enforcement today. I also made every attempt to keep the tests as close to realistic as possible. My deployment round is the 60-grain Hornady TAP, so that was the first I tested. Fired from various positions at 50 yards and in, the rifle was as incredibly accurate. The scope leant itself well to this test. For a perimeter position or traffic stop, this rifle qualifies as very accurate with 60-grain bullets. The Speer 64-grain Gold Dot load was equally as accu-rate at realistic police ranges. When it came to the 55-grain bullets, although they were plenty accurate, there was a noticeable difference. With its .223 Wylde chamber and 1-in-8-inch twist rate, the rifle seemed to really like the bigger bullets.

With the 75-grain and larger rounds, this rifle really shined. The Hornady 75-grain TAP BTHP produced the best group, measuring just 0.6 inches. All these groups were fired from prone using a bag for a rest. The trigger is great for a standard feel but would not be my first choice for accuracy, as my preference is for a two-stage trigger. Accordingly, the accuracy testing was probably affected by this a bit. Still, the results were pretty solid for a 16-inch-barreled AR. All of the heavier rounds created groups measuring less than 0.75 inches, with everything else grouping into 1.5 inches or less at 100 yards. Shooting steel out to 400 yards, it was easy to make consistent hits. The adjustable gas block means this rifle can be tuned to the ammunition you use. Moving from the practice ammunition to the Hornady Superformance was noticeable. This platform lends itself to a tuned gas port, a nice touch. With time and tuning, my guess is that you could make this rifle shoot pretty much any match-grade ammunition well.

The .223 Wylde may be a match chamber, but it works flawlessly—there were no malfunctions or failures to feed or fire. To test the magazine well, I used several magazines. All of them fit, including my SureFire 60- and 100-round mags. All of the mil-spec aluminum magazines worked great, as did my PMAGs. For accuracy and deployment from prone, I used a 20-round PMAG to great effect.

The CBRV1’s 16-inch barrel is handy and probably the best overall length for patrol use. Within quality ammunition, the weapon will provide all you need for realistic deployments. It makes for a very handy patrol rifle, fitting in and around vehicles with ease.

The CBRV1, with its .223 Wylde chamber, is more than accurate enough for any LEO at typical deployment distances. With the appropriate optics, the CBRVI could easily function as a DMR; loaded with anything else, it is just plain accurate and reliable. The features Seekins has packed into this rifle are nice, especially the ambidextrous controls. The billet parts are strong, lightweight and look really nice. Everything else is geared toward the serious operator, making the CBRV1 an excellent patrol rifle. 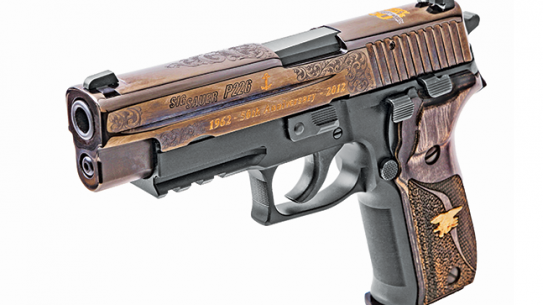 Factory-made commemorative firearms that forge lasting memories out of steel, gold and craftsmanship!