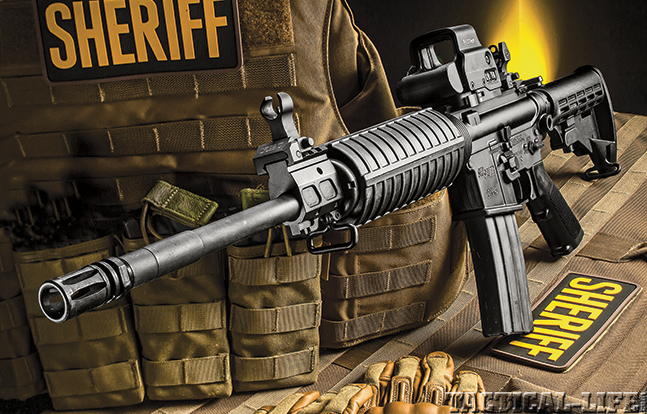 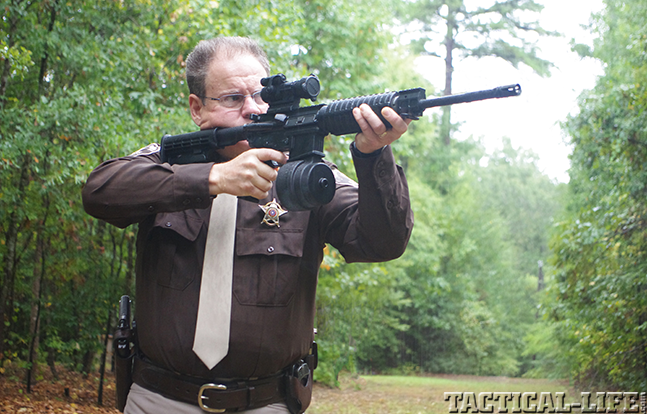 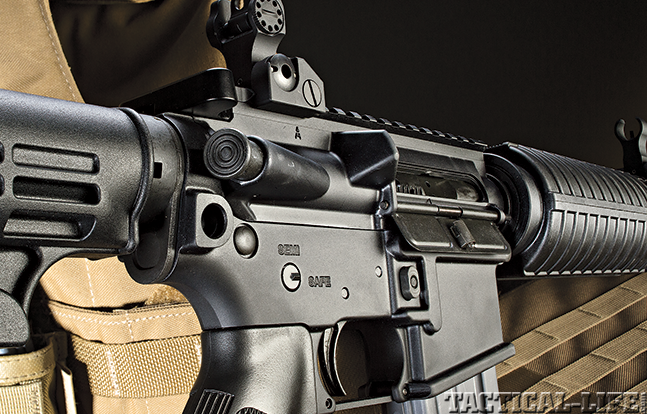 3 of 5
Sig Sauer’s M400 SRP Allows For Limitless Sight Options
The M400 features several design upgrades, including QD sling swivel attachment points at the rear of the receiver on both sides. 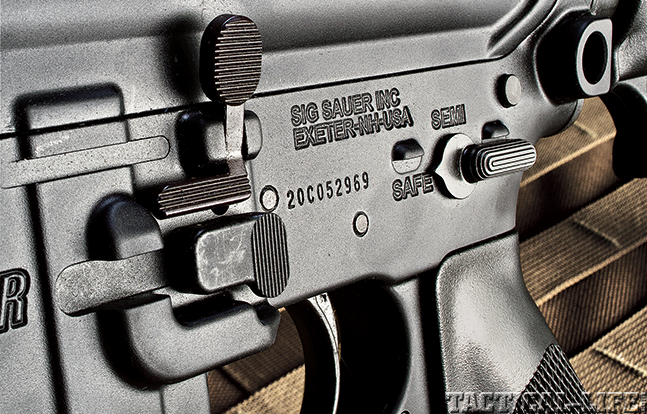 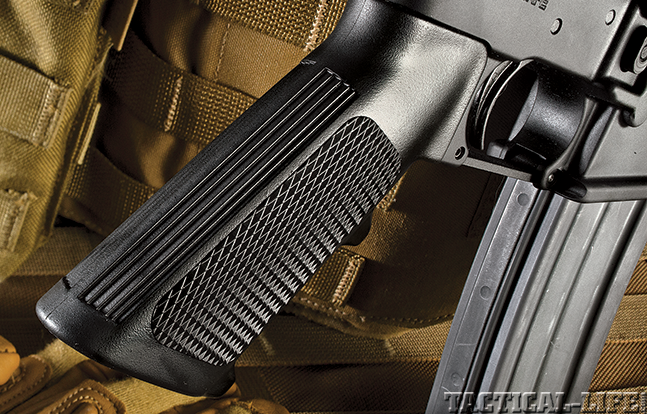 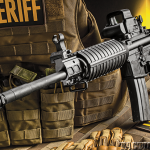 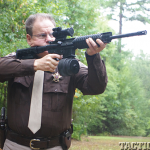 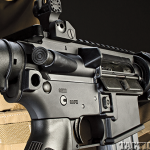 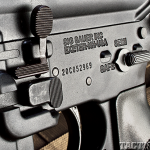 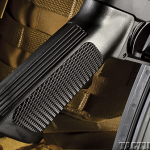 I know my agency’s transition from revolvers to Sig Sauer pistols—where they remain firmly planted today—left a mark on many.

Let’s be honest for a moment. Many in law enforcement, when they hear the name Sig Sauer, think of top-notch, ultra-reliable handguns, perhaps because the folks in Exeter, New Hampshire, have spent decades pounding the value and reliability of their handguns into our heads, or they were carried on duty by myriads of agencies.

It also could be that other Sig Sauer offerings, such as ARs, are latecomers, at least to the U.S. market. (I know the SIG550 has been around for quite a while, but so few were here that it doesn’t really count.) About a decade ago the civilian SIG550, called the SIG551 with proprietary magazines, began appearing in the U.S., followed by the SIG556, which used AR-15 magazines. With the advent of the SIG516—a blend of 550 and AR features—the writing was on the wall. Sig Sauer officially entered the full-blown AR market when its M400 exploded onto the scene.

As long as there are officers on patrol and non-LE folks wanting reliable fighting rifles, ARs will be around in one form or another. As the company has done with its pistols, Sig Sauer is providing American-made ARs to LEOs, Sig Sauer fans and anyone else who wants a direct-impingement rifle!

It was obvious from the get-go that Sig Sauer hit a homerun with the M400 series. Every M400 rifle in the series features a top Picatinny rail; upper and lower receivers forged from 7075-T6 aircraft-grade aluminum and hardcoat anodized; a cold-hammer-forged, chrome-lined, phosphate-coated, 16-inch barrel (the Hunter variant’s is 20 inches) with six-groove, 1-in-7-inch-twist rifling; a 5.56mm NATO chamber; a six-position commercial buffer tube/receiver extension with a firmly staked castle nut; a mil-spec trigger; the direct impingement operating system; an A2-style birdcage flash suppressor (the Hunter has none); M4 feed ramps; a phosphated commercial bolt and carrier with a properly staked gas key; a reasonably flared magazine well; and integral quick-detach (QD) sling attachment points on both sides at the rear of the lower receiver.

All M400s, except for the Hunter and the Sight Ready Patrol (SRP), arrive with sights in place—a folding rear unit and an elevation-adjustable, “F”-marked front sight tower. The SRP has no sights but uses a low-profile, railed gas block to allow for attaching a front sight, while the Hunter has no provision for attaching a front sight. On the Enhanced series, Magpul furniture (stock, pistol grip and forend) is used. The Hunter uses an A2-style fixed stock with a Magpul pistol grip and forend. The Classic, SRP and SWAT use standard A2 six-position collapsible stocks and pistol grips. The Classic and SRP have traditional forends with double aluminum heat shields, while the SWAT features a two-piece railed forend.

All of this goes to show the quality of Sig Sauer’s M400 ARs. Excellent parts and design features are evident throughout. I recently got the opportunity to test the M400 SRP, which is, of course, a product of all this quality.

As mentioned, the Sig Sauer M400 SRP includes no sights, and the low-profile, railed gas block allows users to choose any sight system—iron, red dot or scope—they want without being constrained by a front sight tower. Other traits found on this carbine are shared by the other M400s.

To find the next three enhancements, the receivers need to be separated. At the rear of the lower is a tensioning device, a spring-loaded pin in fact, that applies pressure to the upper and lower receivers, eliminating or reducing play between them. This can lead to improved accuracy.

Another modification is a safety improvement related to instances of case blowout/separation. A pin was added inside the barrel extension to support the extractor during such a situation, hopefully preventing a serious failure. Finally, in addition to the traditional selector lever located on the lower’s left side, a small tab was added to the selector lever’s opposite end. Mirroring the selector lever’s position, the tab provides a tactile identification of the selector’s position. Anyone shooting from the left shoulder can simply use his or her left thumb to determine the selector’s condition.

A traditional-looking A2 collapsible stock with “Sig Sauer” on it rides the M400 SRP’s extension. This stock has a fixed sling attachment point that can be utilized with the sling swivel on the bottom of the railed gas block. The lower’s integral QD points should please those who prefer single-point slings. Finally, the flattop rail has white indexing marks for relocating optics and accessories after removal.

I used this as an opportunity to test a couple of new optics. Leupold’s Mark AR line was designed and built with ARs in mind. The Mark AR line performs well in lower-light situations because Leupold uses its Multicoat 4 lens coating system and Quantum Optical System to deliver the most light possible. For CQB, I chose the 1.5-4x20mm Mark AR MOD 1 scope, while the 6-18x40mm Mark AR proved ideal for longer ranges because of its 18x magnification capability. Both scopes had the optional FireDot System, an illuminated dot within the reticle. With Leupold’s new Mark 2 Integrated Mounting System I easily attached the scopes solidly to the SRP’s flattop.

The SRP arrived with one gray NHMTG aluminum magazine with a gray follower. I tossed a few more into the mix—polymer, coated stainless steel, polymer with metal reinforced lips, and an assortment of aluminum versions dating back a number of years—and none made the M400 choke.

The heft and balance of the SRP made it handle just as expected. Not burdened with heavy rails or a ton of other accouterments, the 6.3-pound carbine snapped from target to target easily and smoothly. With the stock fully collapsed, the SRP is handy when moving through tight spots.

Before heading to the range, I checked the SRP’s single-stage trigger pull, which measured 7 pounds with a little grittiness. This weight certainly meets Sig’s claim of the SRP having a mil-spec trigger, and is probably a good idea with undertrained personnel or when the carbine will be shared with others. It does make me have to work all that much harder when wringing the accuracy potential from a rifle.

The carbine’s accuracy was in line with my expectations, with the smallest five-shot group of the day hovering in the 0.91-inch range. All of the test loads performed admirably, providing great fight-stopping accuracy. I suspect some of the variation between the smallest and largest groups could be attributed to the trigger pull and some to the trigger puller. As a finale to the accuracy testing, I fired a 200-yard, five-shot group, which did not spread that much from the largest group fired at 100 yards.

After proving the SRP could shoot accurately at distance, I attached Leupold’s 1.5-4x20mm Mark AR scope, turned on the FireDot and worked through a few drills. This compact, lightweight carbine handled as expected, providing all the accuracy and agility needed at compressed distances.

The M400 SRP is a quality-made AR with nice modifications. It shot and handled like an AR, with no earth-shattering occurrences. Its accuracy, though good, was in the range one would expect, and its handling was as Eugene Stoner intended his creation to be: ergonomically sound.

I liked each one of the modifications Sig Sauer made to its AR. All were well thought out and definite improvements. For instance, the tensioning system used to tighten the lower and upper receivers does not interfere with disassembly, as some have. As I said, it’s well thought out! Why would an LEO choose the Sig Sauer M400 SRP over other factory-built ARs? Perhaps because it is well built, using the decades of experience Sig Sauer has accumulated in manufacturing handguns and long guns. Or maybe because it is reasonably priced and wears a trusted name in law enforcement: Sig Sauer. 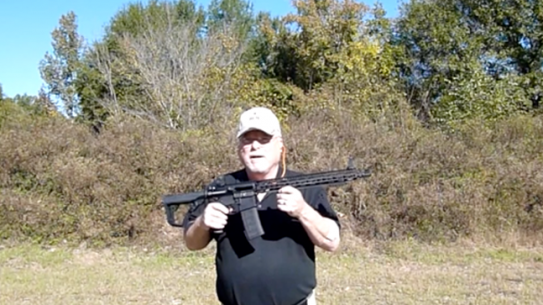 With its KeyMod accessory-mounting handguard and ergonomic furniture, the DDM4V11 Lightweight shaves pounds without...