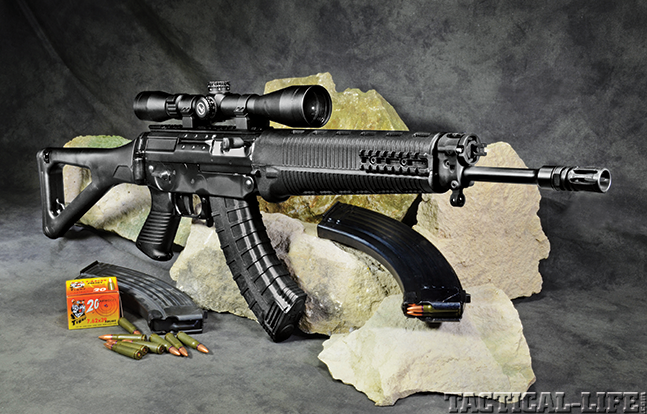 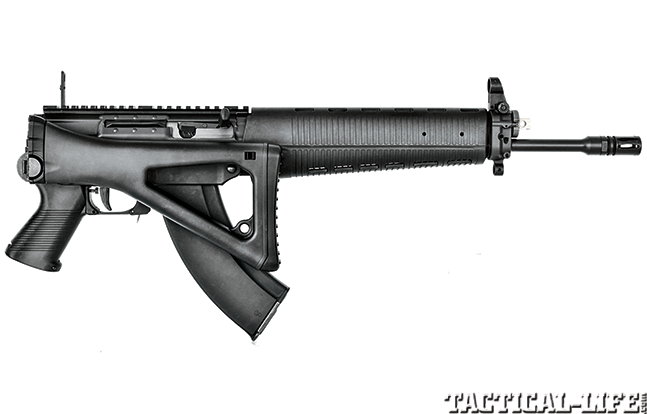 2 of 7
Sig Sauer’s SIG556R Is Built on Reliability, Versatility
With the Swiss-style stock folded to the right side, the carbine is a compact 26 inches long yet is still capable of firing. 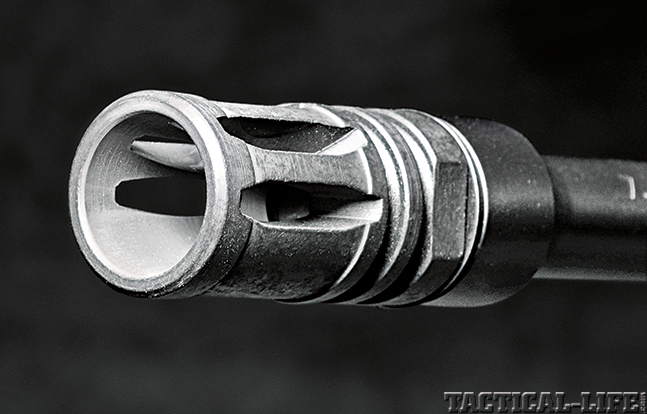 3 of 7
Sig Sauer’s SIG556R Is Built on Reliability, Versatility
The 16-inch-long, nitrided barrel has a 1-in-9.5-inch twist rate and is capped with a standard birdcage-style flash suppressor. 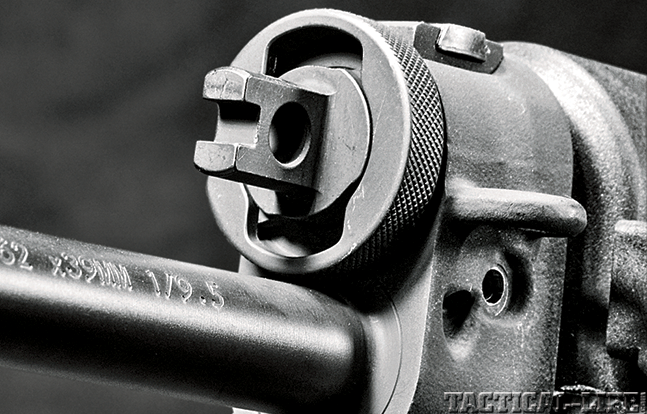 4 of 7
Sig Sauer’s SIG556R Is Built on Reliability, Versatility
The SIG556R features a gas regulator that may be turned to the standard position as shown or to a more open position for better functioning when the gun is very dirty or in cold, icy conditions. 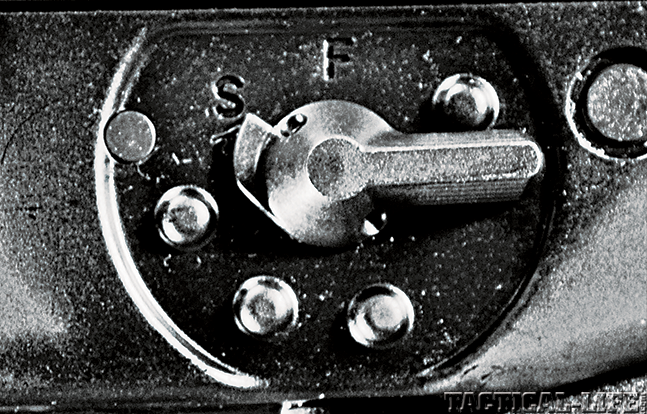 5 of 7
Sig Sauer’s SIG556R Is Built on Reliability, Versatility
The SIG556R features an ambidextrous safety that may be turned to the standard position as shown or to a more open position for better functioning when the gun is very dirty or in cold, icy conditions. 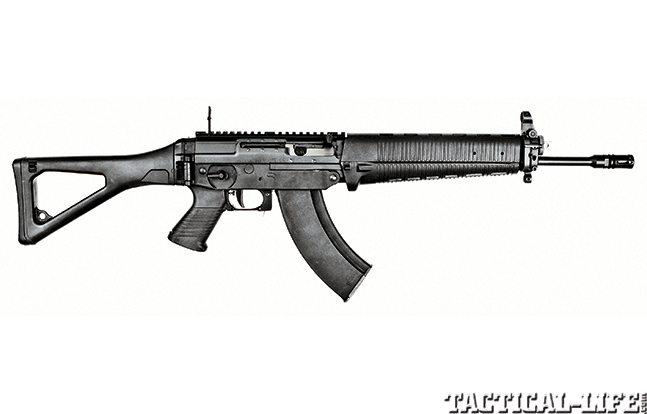 6 of 7
Sig Sauer’s SIG556R Is Built on Reliability, Versatility
The SIG556R’s easy-to-reach charging handle and bolt release are positioned on the right side. 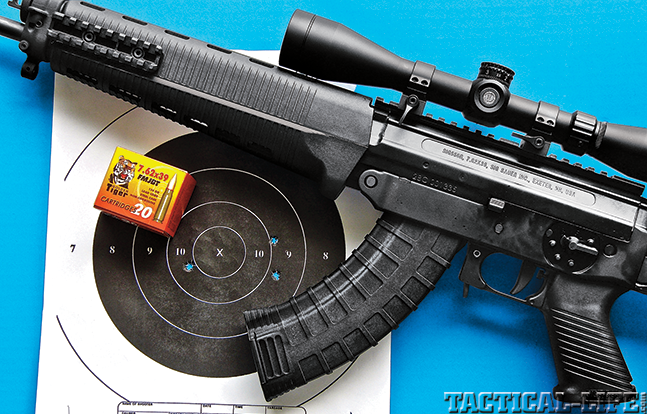 7 of 7
Sig Sauer’s SIG556R Is Built on Reliability, Versatility
In testing, the 7.62x39mm SIG556R worked with both polymer and steel AK-style magazines, and it fed every round, Russian or American, reliably. 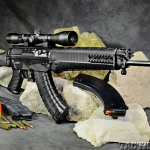 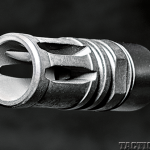 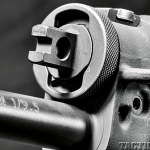 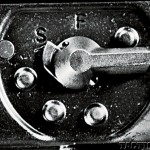 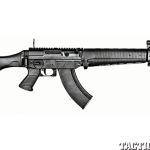 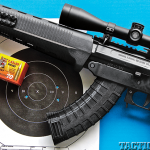 The SIG550 series of rifles has been among my favorites ever since I got a chance to shoot an early SIG540 in Switzerland some 30 years ago. The Swiss adopted the rifle as the Stgw 90 and marketed the civilian SIG550 and even scarcer SIG551 in semi-auto versions, which were imported into the U.S. in limited numbers. Currently, my original SIG550 spends most of its time in the safe while I shoot the current production SIG551-A1. In fact, after purchasing the SIG551-A1, I decided that I would stop acquiring SIG550 series rifles. Then, the SIG556R came along.

The SIG556R has the same ergonomics and stock as my SIG551-A1, but it is chambered in the less expensive 7.62x39mm Russian caliber, hence the “R” in the designation. At first thought, the primary advantage of the SIG556R would be the ability to shoot less expensive ammunition. I just did a quick Internet check and found 1,000 rounds of steel-cased, non-corrosive 7.62x39mm ammo for $275. By comparison, I found 1,000 rounds of brass-cased, 55-grain 5.56x45mm for $370. However, steel-cased 5.56x45mm ammo is available for about $275 as well, so I could run that in my SIG551-A1 for about the same price as using the SIG556R using steel-cased ammo. On the other hand, the extractor in my SIG551-A1 is not designed for steel-cased ammunition, which might cause problems. I stick to brass-cased ammo for my 5.56x45mm weapons. In fact, the only weapons in which I shoot steel-cased ammo are those in 7.62x39mm, 5.45x39mm and 9x18mm Makarov, as they were designed for steel-cased ammo.

The shooter who wants one rifle to perform an array of tasks might find the SIG556R the perfect choice. Admittedly, he or she could probably find another cheaper rifle in 7.62x39mm, but it wouldn’t be a Sig. A SIG556R could be used for hunting most North American game and would also be a good self-defense or preparedness rifle. A case of 7.62x39mm ammo would allow the owner to fire a few hundred rounds to get to know the rifle and still have a good ammo supply on hand. Oh, and speaking of the supply of ammunition, purchasing a few spare magazines will be relatively inexpensive, as the SIG556R takes standard AK-47 magazines. One other point related to the SIG556R’s value for a one-rifle shooter is that it comes with a Sig Sauer Mini Red Dot sight.

I managed to talk myself into ordering a SIG556R. It is an American-made derivative of the Swiss Stgw90 military rifle and uses the same long-stroke gas piston system with an AK-type, two-lug rotating bolt. Instead of the solid round piston of the SIG550/Stgw90, the SIG556 uses a fluted or X-shaped piston, which many experts consider not just lighter but also stronger. It also easier to remove carbon buildup with this design. Another improvement with the SIG556 is the use of a two-strand braided return spring as opposed to a single spring on the SIG550. Both the SIG550 and SIG556 use a gas compression chamber that houses the piston and return spring. A two-stage gas regulator at the front of the gas cylinder can be used to adjust the gas pressure. Normally, this regulator may be turned with your fingers, but occasionally I have inserted the tip of a cartridge to move it. Generally, the lowest setting will work, but occasionally, if I have been really shooting a lot without cleaning the rifle, I have had to adjust it to the more open position for reliability. The more open position may also be used in cold, icy conditions. Normally, though, using the gas system’s “overpressure” setting should be avoided.

The SIG556 has a chamber surrounded by more steel than many rifles, which reduces stress from firing a substantial number of high-powered rounds. SIG556 barrels are button rifled. The rifle also comes with a beefier firing pin, meaning there’s less chance it’ll fracture with use and leave the SIG556 inoperable.

Although earlier SIG556s had an AR-type stock, most now have the SIG550 style of side-folding stocks. These are, in my experience, the most comfortable folding stocks I’ve used—they feel as comfortable and solid as a fixed stock. SIG556 rifles also use the ambidextrous safety switch of the SIG550 and its paddle magazine release, which is easily reached with either hand. The cocking handle is well designed for operation with either the shooting hand or support hand while reaching under the receiver (with the left hand). It is also large enough that a boot may be used to kick the action open to extract a stuck case. In regards to that, the SIG556R has a good-sized, sturdy extractor. The rail on top of the receiver allows for the mounting of a wide array of optical sights or the excellent Sig Sauer diopter drum rear sight.

Because of the 7.62x39mm chambering, the SIG556R has some different features. Its magazine well is designed to take rock-in AK magazines rather than M16 magazines. I tried an array of AK magazines—polymer and steel—and they all inserted and fed reliably. I also tried a 40-round RPK magazine, which worked as well. An RPK drum will not work, as the SIG556R’s magazine well is not deep enough. The Russian, Bulgarian, Hungarian and Chinese military AK-47 mags all worked well with the test rifle.

A couple of other comments on magazines and the SIG556R: As is typical with rifles using AK magazines, the bolt does not remain open after the last round is fired. Also, the current generation of SIG556R rifles is designed to handle steel AK magazines without excessive wear or problems with solid retention.

Another adaption for the 7.62x39mm round is a heavier hammer spring to reliably ignite heavier primers in non-U.S. loads. This feature does adversely affect the usually crisp SIG556 trigger pull, but it is still better than many rifles I’ve reviewed. To stabilize the 7.62x39mm bullet, the SIG556R’s barrel has a 1-in-9.5-inch twist rate. The 16-inch barrel is nitrided, a heat-treating process that diffuses nitrogen into the surface of the metal to harden it and make it very corrosion resistant. The SIG556R’s piston is nitrided as well, and that is another part that is susceptible to corrosion with corrosive ammunition.

This brings up the question of corrosive ammunition. I fired up the last of my corrosive 7.62x39mm ammo a few years ago in my Norinco AK-47 and have since purchased Russian ammo billed as non-corrosive for most shooting. Definitely, if corrosive ammo is used in the SIG556R or any other rifle, it should be thoroughly cleaned with boiling hot water. I then use World War II-surplus GI bore cleaner followed by oiling.

As mentioned, the SIG556R comes with a very nice little Sig Mini Red Dot sight. I did not test the rifle with it, as I wanted to try it at distances farther than I normally use a red dot (i.e., 50 yards). Instead, I mounted Leupold’s 3-9x40mm Mark AR MOD 1 scope with a FireDot-G (Green) Tactical Milling Reticle (TMR). Since I value the SIG556R’s versatility, I wanted a sight that would let me shoot out to 500 yards or more as well as up close for CQB set on 3X magnification. I can do this by turning on the green dot of the illuminated reticle.

I have found the most accurate 7.62x39mm ammunition I’ve tried to be CorBon’s 123-grain DPX, but I am out of it right now. In fact, the only 7.62x39mm I have is Brown Bear 123-grain and Golden Tiger 124-grain ammunition, both of which I ordered in case lots before ammo got so expensive. Although this made maximizing the SIG556R rifle’s accuracy more difficult, I felt it made sense to test the rifle with ammunition that I would use to shoot it most of the time, as will most others. I think most of us will keep a few boxes of U.S. ammunition, such as CorBon’s, around but will do most of our practice with steel-cased Russian loads or perhaps some of the surplus ammo that is still around.

Since it was easier to get at the Golden Tiger, I loaded the magazines I took along with me, including four 30-rounders and one 40-rounder, plus an extra box or two for loading into a five-round magazine for zeroing the scope. The SIG556R fed and extracted all of the rounds reliably. The only groups I shot were at 100 yards, and the better ones ran in the 2.5- to 3.5-inch range. Based on my experience with this ammo in other rifles, I was satisfied with that. Since I shoot Sig Sauer rifles a lot, I found the ergonomics of the safety and mag release familiar. I also found the stock comfortable, though I did find that I had to move the scope forward slightly to get the best cheekweld/eye relief combo. A cheekpiece is available for Sig Sauer stocks that often helps improve your cheekweld.

I most definitely like the SIG556R. Right now, I have a better supply of steel-cased Russian 7.62x39mm ammo than I do of 5.56x45mm ammo. As a result, the SIG556R will become the Sig I take to the range most often.

There is a good argument to be made for the SIG556R for the shooter who wants a do-anything centerfire rifle. 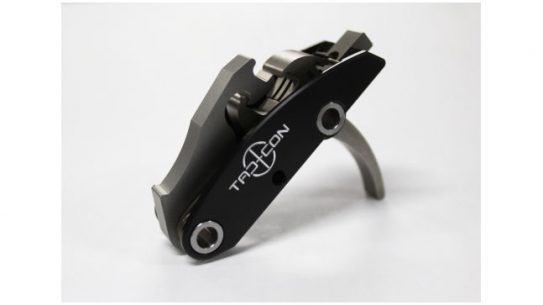 Tac-Con tackles the AK-47 platform with the all new Raptor Trigger System, which features...