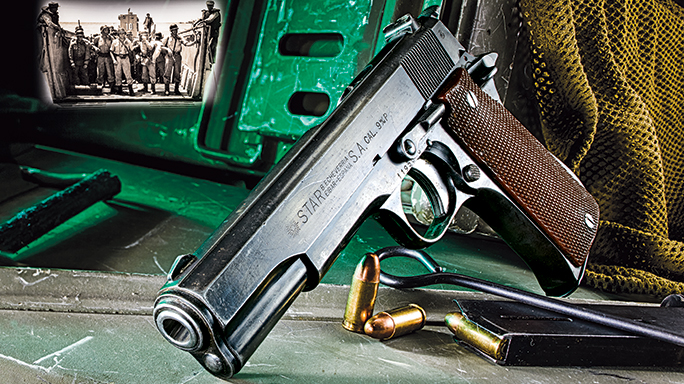 1 of 9
Photo by Steve Woods
Gun Review: Spain’s Star Modelo B Pistols
The Star Modelo B Super was the first Spanish service pistol chambered for the 9mm Parabellum cartridge. Its 1911 heritage is quite obvious. 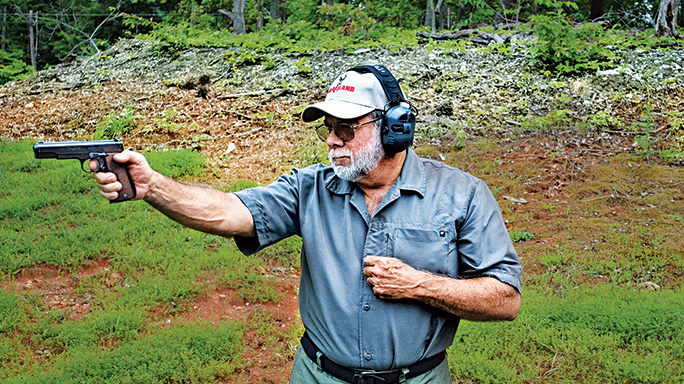 2 of 9
Gun Review: Spain’s Star Modelo B Pistols
Thanks to its 1911-style ergonomics and light-recoiling 9mm chambering, the author found the Modelo B Super an extremely accurate and pleasant pistol to shoot during testing. 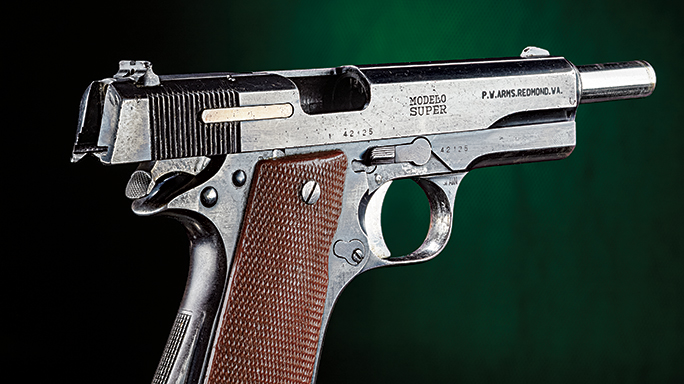 3 of 9
Photo by Steve Woods
Gun Review: Spain’s Star Modelo B Pistols
Anyone experienced with a 1911-style pistol will have no trouble operating or shooting the 9mm Star Modelo B Super. This vintage model came from Aim Surplus. 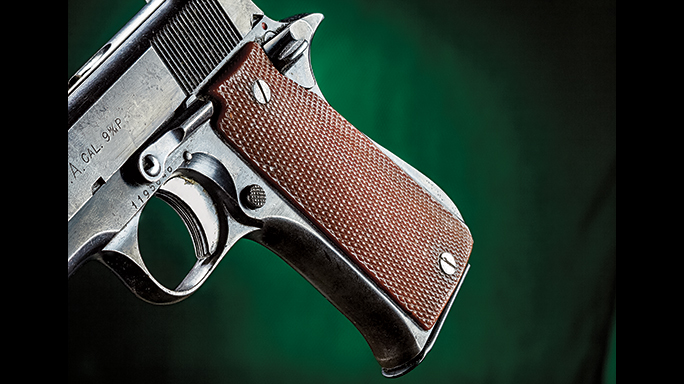 4 of 9
Photo by Steve Woods
Gun Review: Spain’s Star Modelo B Pistols
The pistol was fitted with checkered plastic grip panels, and all of the controls are in positions similar to those on a typical Model 1911. 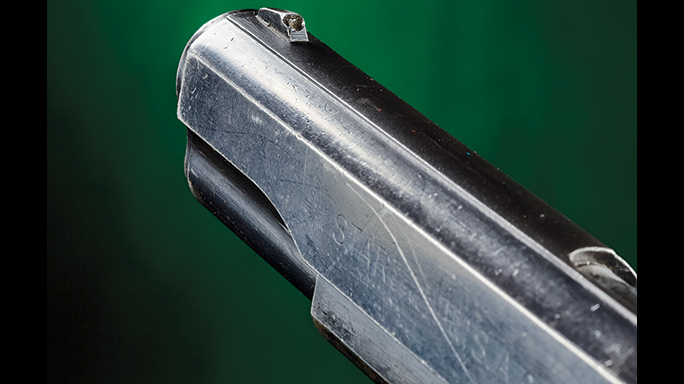 5 of 9
Photo by Steve Woods
Gun Review: Spain’s Star Modelo B Pistols
The Modelo B’s front sight is machined into the slide. Note that the sight normally came with a white-dot insert that is missing on this sample. 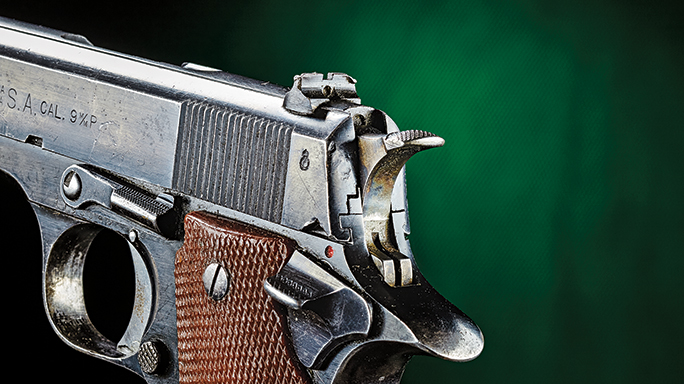 6 of 9
Photo by Steve Woods
Gun Review: Spain’s Star Modelo B Pistols
The rear sight has a square notch, and its white dot is also missing here. The thumb safety could be applied with the hammer cocked or forward. 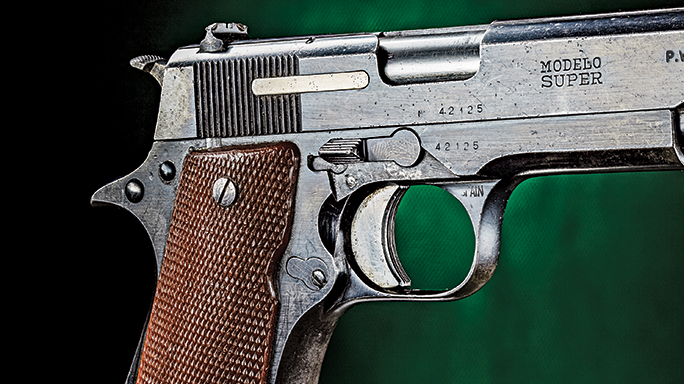 7 of 9
Photo by Steve Woods
Gun Review: Spain’s Star Modelo B Pistols
Here you can see the Modelo B’s large external extractor and frame-mounted takedown lever, which allows the slide unit to be removed en bloc. 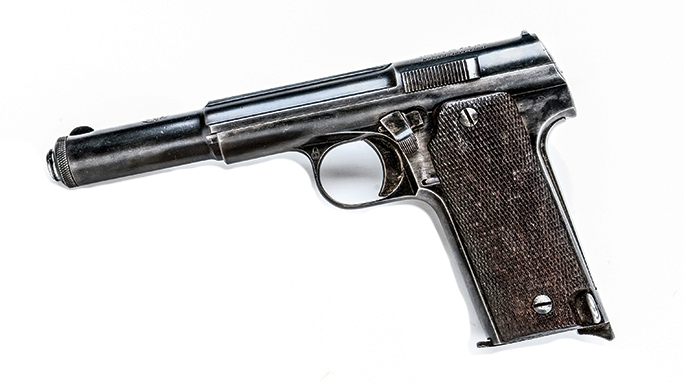 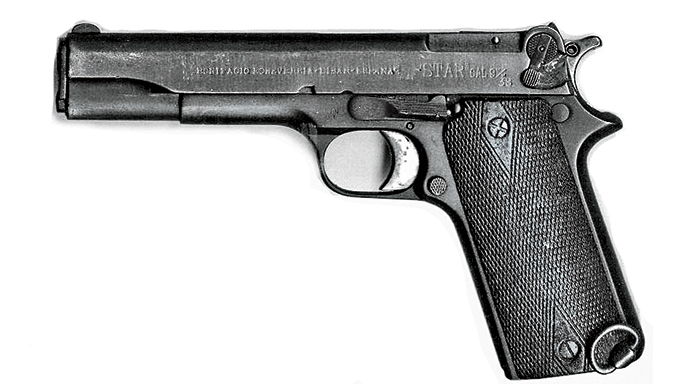 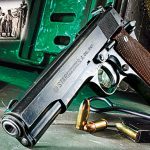 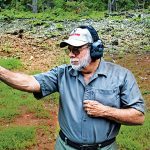 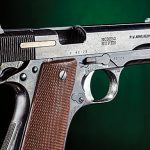 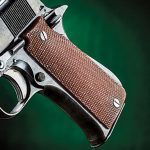 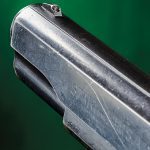 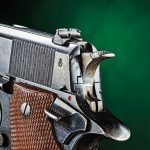 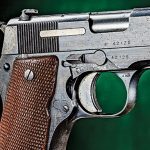 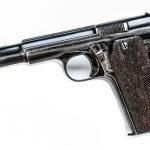 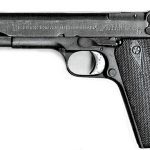 The mountainous region around the city of Eibar in northeastern Spain possesses an abundance of iron, coal and water power, which, when combined with the industriousness of the region’s Basque people, led to the development of the Iberian Peninsula’s greatest arms-making center. One of these was a family-owned firm with the name of Bonifacio Echeverria, S.A.

Established by José Cruz Echeverria in the 19th century, his sons Julián and Bonifacio took control of the firm in 1905 to enter the burgeoning market for the new breed of semi-auto pistols. The firm’s first product, the Pistola No. 1 (aka Modelo 1905), was a simplified version of the Mannlicher M.1900 chambered for the (then) new 6.35mm Browning (.25 ACP) cartridge. The Pistola No. 2 Modelos 1906 and 1908 were similar, while the Modelos 1910 and 1914 were chambered for the 7.65mm Browning (.32 ACP).

During World War I, the Echeverrias were one of the subcontractors producing a 7.65mm “Ruby” style pistol for Gabilondo y Urresti, which sold hundreds of thousands of them to the French and Italian armies. But Bonifacio also obtained a separate contract from the French for the Pistola Modelo 1914, or, as they renamed it, the Pistola Modelo 1 Militar. The Modelo 1 Militar was marked “Izarra” (Spanish for “Star”) or later “Star,” which led the French to designate it the “Pistolet automatique, type Star.”

In 1919 Julián left the firm to head a technical school for gunsmiths. Bonifacio obtained the trademark name “Star” for the firm and renamed it Star Bonifacio Echeverria, S.A. Realizing that the world market was oversupplied with Ruby-type pistols, Bonifacio set about designing and producing a pistol chambered for more powerful cartridges.

The resulting Pistola Militar Modelo 1920 was based upon the Browning-designed Colt 1911 pistol. While the breech-locking system was identical to the 1911, a number of dimensional and mechanical changes made it cheaper and faster to produce. These included the hammer strut; the firing pin stop; the mainspring housing being an integral part of the frame; a pivoting trigger (instead of sliding); the grips are attached directly to the frame without grip screw bushings; a slide-mounted hammer-block safety; and an external extractor. The pistol was adopted by Spain’s Guardia Civil in 9mm Largo.

The 9mm Largo cartridge (a.k.a. 9mm Bergmann-Bayard) had been adopted by Spain in 1913 with the Pistola Automatica Campo-Giro Modelo 1913. It was also used in the improved Modelo 1913-16 and the well-known Pistola Automatica Modelo 1921, better known as the Astra Modelo 400. It consisted of a straight-walled, rimless case 23mm in length whose 128 FMJ bullet was propelled to 1,145 fps. It would remain the standard-issue pistol cartridge of the Spanish Army and Guardia Civil until 1946, and pistols chambered for it continued in service well into the 1980s.

In 1924 Star began marketing its Modelo A, which was basically the Modelo Militar 1922 with a new name, and production continued until 1983 with changes and improvements made along the way. The most apparent took place in 1931 when an arched backstrap was added to the grip frame. Outwardly, the Modelo A looks almost identical to the 1911 pistol without a grip safety.

The following year, Star began production of the Modelo B—which was little more than the Modelo A with a more ergonomic grip—in both 9mm Largo and 9mm Parabellum, primarily for export. The year 1931 saw the introduction of the Modelo P, which was little more than an upsized Modelo B chambered for the .45 ACP cartridge. The British purchased numbers of Modelo Ps early in World War II for issue to their undercover operatives working in Europe.

There was also a Modelo PD that featured a selector switch for full-auto fire and was fitted with a wooden holster/shoulder stock and extended magazine. The Modelo B and P pistols sold widely in Latin America, and the Argentine-made Ballester-Molina .45-caliber pistol was based to a large degree on the Modelo P design.

Because of the region’s strong industrial base with its large numbers of (mostly poorly paid) workers, the labor movement and socialism became particularly strong in Eibar. In 1931, Eibar was the first city in Spain to proclaim the Second Spanish Republic, which led to the overthrow of the unpopular King Alfonso XIII. During the ensuing Spanish Civil War (1936 to 1939), the region supported the Republican (socialist/communist) side and was a major source of weaponry for the workers’ militias fighting the Nationalist forces of General Francisco Franco. Large numbers of Star pistols, of all models, saw service.

In 1937 the Eibar region fell to Franco’s forces and the entire production of the Star factory was supplied to Nationalists. By 1939 the city of Eibar was devastated and the arms industry was virtually destroyed. After the civil war, Star was one of only three manufacturers allowed to continue making handguns, and they avidly pursued the military and commercial markets in Spain and around the world.

During WWII, the Star factory produced numerous arms for export to countries engaged in the war, mostly Axis and other aligned countries. Smaller Star pistols were used by aircrews, and full-sized guns were employed by police, second-line units and certain specialist troops. Between 1942 and 1944, Nazi Germany purchased in excess of 25,000 Modelo B pistols, designating them the Pistole Star Modell B (.08) while 15,000 were sold to Germany’s ally, Bulgaria.

After the war, an additional 9,500 Modelo B pistols were supplied to West Germany for issue to its Landes Polizei (State Police). Some will be found with “L.P.N.” stamped on the grip frontstrap, which indicates they were used by the Landes Polizei Niedersachsen (Lower Saxony State Police).

Because of the U.N. arms embargo, the South African Defence Force (SADF) was unable to obtain weapons from its traditional sources in Great Britain and Belgium. But Generalissimo Franco’s government apparently had no qualms about supplying arms to the South Africans, and the SADF adopted the Modelo B, which they used well into the 1990s. Israel also obtained a quantity of Modelo Bs for issue to its police but it is uncertain if they were purchased from Star or were surplus South African pistols.

In 1946 Star introduced the Pistola Modelo B Super in 9mm Parabellum. This design replaced the barrel link with a cam similar to that used on the FN Hi-Power pistol and had a quick takedown system that allowed the slide unit to be removed en bloc. The extractor was modified to act as a loaded-chamber indicator, and a magazine disconnect safety was also included in the design. Apparently Star produced the Modelo B and Modelo B Super pistols concurrently for some time. Of note is the fact that Star offered 9mm Largo replacement barrels for the Modelo B Super pistol. If you have any doubts, be sure to have a qualified gunsmith verify which cartridge your pistol is chambered for.

The Modelo B Super was the first 9mm Parabellum pistol to be taken into service with the Spanish armed forces. While it was the “standard” issue pistol of the Spanish Army and Guardia Civil, it did not completely replace the Astra Modelo 1921 until the early 1980s.

From the 1950s through 1975, the Spanish Army and La Legion Extranjera (the Spanish Foreign Legion) engaged in a series of campaigns against nationalist guerillas in her African colonies. The Modelo B Super (alongside many Astra Modelo 1921s) saw wide service during the fighting in Spanish Morocco, Ifni and the Spanish Sahara.

In 1972 the Pistola Star Modelo BM, a shortened and lightened version of the Modelo B, was adopted for issue to army officers and the Guardia Civil while others were sold to the SADF. Star also produced two versions with lightweight alloy frames, the Modelos BKM and BKS. The latter was sold in the U.S. as the Starlite.

Star and the other major Spanish pistol maker, Astra, joined forces in the 1990s but the downturn in the world arms market led to both companies closing down in 1997.

For this article, a sample Modelo B Super pistol was purchased from Aim Surplus. The one I received had a fair amount of handling and holster wear but mechanically it was in excellent condition with a clean bore and a better trigger than you’ll find on most surplus pistols. While easy to acquire, I felt the sights were a bit low and were missing the white-dot inserts Star fitted to the sight for shooting in low light.

My wife Becky and I test-fired the Modelo B Super from an MTM K-Zone rest at 15 yards with Sig Sauer Elite Performance 9mm ammo loaded with 115-grain FMJ bullets, which produced a series of well-centered groups ranging from 1.5 to 2.5 inches in size.

We also ran some off-hand drills on a combat target at 7 yards, firing the pistol with supported and one-handed grips. Thanks to its 1911-like ergonomics, the Star handled and pointed very naturally, and of the 36 rounds we sent downrange only four wandered outside the X and 9 rings. Of the approximately 100 rounds we fired that afternoon, we experienced a total of one malfunction, a stovepipe jam that was easily cleared. I must say that I was impressed with how well this this old warhorse performed and can easily understand why the Star Modelo B pistols were so popular. 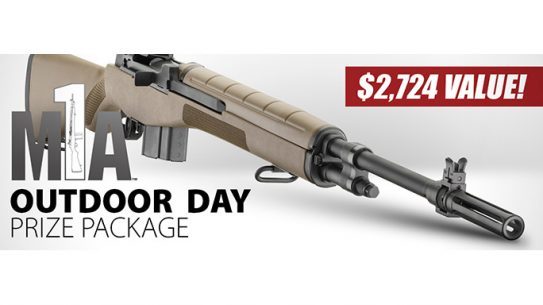