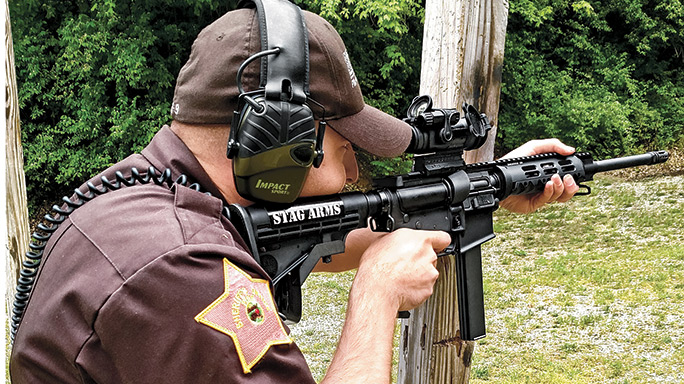 1 of 5
Stag Arms’ Model 9: Bucking the 5.56mm Trend
During testing, the Model 9 performed admirably. If you can run an AR, you’re already trained to use the Stag. 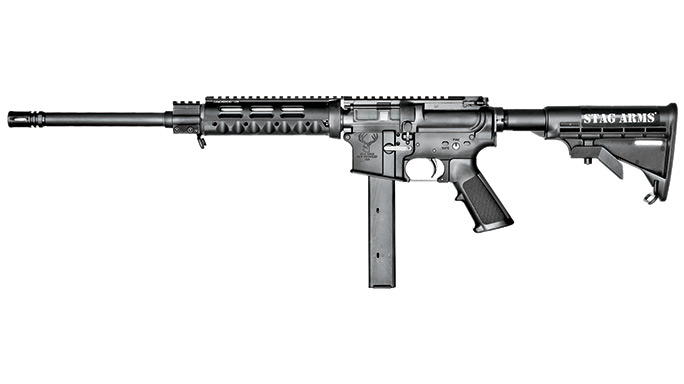 2 of 5
Stag Arms’ Model 9: Bucking the 5.56mm Trend
The Model 9 is designed to use reliable Colt/Uzi-style stick mags that hold 32 rounds of 9mm ammo in a double stack. 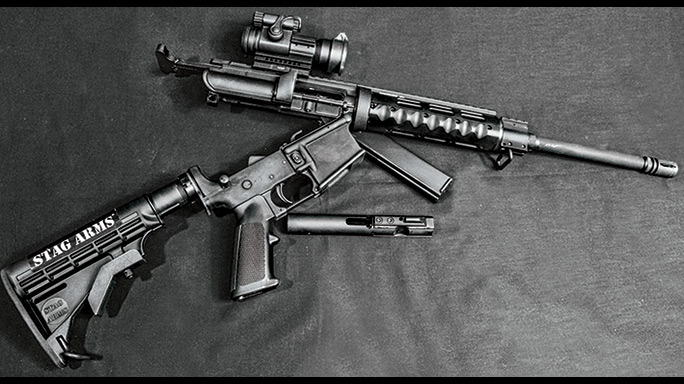 3 of 5
Stag Arms’ Model 9: Bucking the 5.56mm Trend
Stag’s Model 9 can be taken down and reassembled just like a 5.56mm AR for easy cleaning and maintenance. 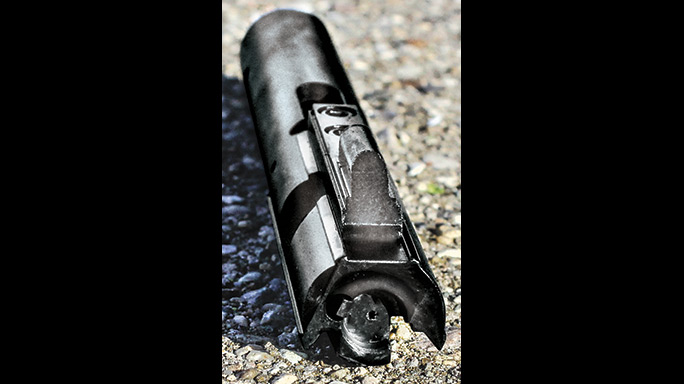 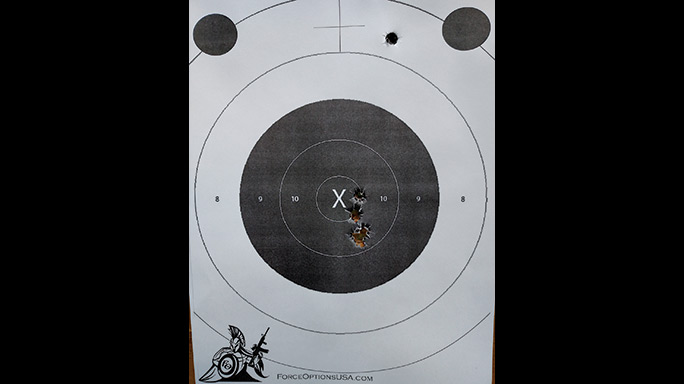 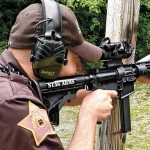 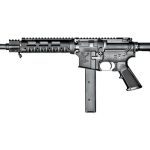 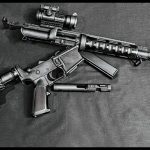 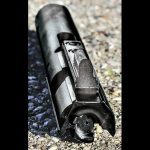 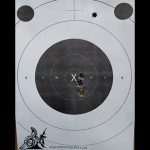 As the ballistic performance of 9mm ammunition has improved, so has the interest in the law enforcement world to move back to the round.

One of the biggest shifts recently was the FBI transitioning to the 9mm round. While the number of sidearms chambered for this cartridge will continue to grow, there has also been an expanding interest in carbines chambered in 9mm. For law enforcement, a rifle chambered in a pistol caliber offers many advantages like a reduced sound signature, a manual of arms identical to a standard AR’s and cleaner functioning.

Enter Stag Arms and its Model 9, a well-built AR rifle chambered in 9mm. Stag Arms is well known in AR circles as a respected builder of quality rifles. While the company has a long history in the 5.56mm division, the Model 9 is Stag’s first move into rifles chambered in pistol calibers. As would be expected, though, this is not a casual decision and serious development went into this new beauty.

Worth mentioning right out of the gates is that the Model 9 is built on dedicated 9mm upper and lower receivers. While some companies trying to enter this space are placing adapter blocks in the lower receiver’s magazine well, this is not the case with Stag. The dedicated 9mm lower is forged from 7075-T6 aircraft-grade aluminum. To experienced shooters, this stands out as critical. Many times modification kits and conversions provide less-than-desirable reliability. Stag has eliminated any possible problems with its dedicated 9mm design. The lower receiver has the same look, dimensions and feel of rifle-caliber guns. The difference is the magazine well, which is built to run double-stack, Colt-pattern, 32-round magazines.

Two other noticeable differences are the lack of a forward assist and the presence of an oversized shell deflector. Beyond that, the Model 9 looks like any standard AR rifle found in patrol cars around the country. The rifle comes with a standard six-position stock as well as a nice, small-diameter Diamondhead VRS-T handguard that fits the rifle well.

Once the rifle is cracked open, the differences begin to really emerge. Being a pistol-caliber rifle, it features a blowback-operated action, essentially a larger version of your pistol’s. The traditional bolt carrier group looks slightly similar to an AR’s but has the bolt face milled into the front surface. This is accompanied by a channel designed to accommodate the fixed ejector. The “gas key” is little more than a connection point for the charging handle. Even the hammer, magazine catch and buffer are all specifically designed for the 9mm.

There are currently four versions of the Model 9 available: the standard Model 9; the left-handed Model 9L; and the Models 9T and 9TL, which come equipped with Diamondhead low-profile folding sights as well as longer VRS-T handguards. I was able to test the standard Model 9 with a 16-inch barrel.

While many guns look good on paper, since this is a law enforcement-centric rifle, it required some serious range time. Testing was done at the Petersburg Law Enforcement Training Facility in Petersburg, Indiana. This would be a superb place to test the Model 9, as the shooters here are not ones to be easily stirred by the ”newest” gun on the market.

Keeping with the theme, one of the SWAT officers that helped with the testing offered up his Aimpoint Patrol Rifle Optic (PRO) for targeting, and we were ready to roll. Testing would consist of measuring the accuracy from a supported position at 50 yards, quick shots on targets from 2 to 25 yards, deploying from vehicles and sustained fire.

For our accuracy testing, we would stick with standard duty-style ammunition. The three flavors for this day were Hornady’s 135-grain +P FlexLock Critical Duty, Winchester’s 124-grain +P Defender and Speer’s 124-grain +P Gold Dot. My initial impressions of the rifle were on par with what I expected from Stag. It was a nice-shooting rifle with very minimal recoil. The standard trigger is a mil-spec-style unit with about a 6-pound pull. While this is not exactly National Match tuning, it is exactly what most LE agencies are looking for.

The Aimpoint PRO was a good addition to the gun, and the 16-inch barrel certainly helped in the velocity and accuracy departments. Out of the mix, the Hornady 135-grain Critical Duty load produced the best five-shot group, which measured only 2 inches at 50 yards. All of the duty loads performed well. Out of sheer curiosity, we loaded a magazine with general 115-grain ball ammo from Patriot Munitions. While there was obviously less expansion, the plain ball ammunition shot good groups as well. This garnered some nods and smiles from the instructors because budget restraints force many agencies to train with ball ammo. The fact that very little accuracy was lost made an impression.

Next up were dynamic applications. The shooters went into standard operating mode and ran the Model 9 just as they would a general patrol rifle. The rifle handled well and fed reliably. One major trend that quickly developed was the speed of engagement. Because of the easy accuracy of the rifle, shooters had to spend much less time lining up shots. Every shooter quickly became confident that their shots would be on target, and the time between targets diminished greatly. The rifle handled well, and all of the shooters ran the Stag through drills just as they would their standard patrol rifle. While the Uzi-style magazine was new to some shooters, they all quickly adapted to the straight-down design.

One interesting byproduct of a rifle chambered in a pistol caliber was an increased muzzle velocity of the 9mm round. Generally, 9mm rounds will see an increase of 230 fps in a 16-inch barrel. During vehicle engagements, the extra velocity proved to be very helpful in defeating the light metal and plastic of the car door. In testing, a ball round was fired from one side of the vehicle into the passenger-side door. While penetrating this barrier with a 9mm is common, the round maintained sufficient velocity to exit the other door on the other side of the car. This allows for greater ballistic performance on any threat inside of a vehicle.

Next came shooting steel at distance. All shooters repeatedly hit the 8-inch reactive steel targets at 100 yards with ease. While being relegated to a pistol range, we were able to get hits at the maximum available distance of 250 yards on a 12-inch steel plate. While the effective ballistics of a pistol round shot at this distance are certainly debatable, this was all about seeing what was possible. At every turn, the Model 9 rose to the challenge.

While some may dismiss a rifle chambered for pistol rounds as an anomaly, they should be reminded that the .44-40 Winchester Model 1873 was one of the guns that tamed the West. Over 60 years later, the Thompson submachine gun would be one of the most influential weapons in WWII, firing a .45 ACP round. According to a Stag Arms press release, “Compared to the 5.56mm cartridge, the 9mm cartridge used in a carbine configuration is the ideal choice for short-range and self-defense use up to 200 yards due to decreased muzzle blast, decreased muzzle flash, lower recoil, reduced overpenetration and a heavier bullet. An added benefit is that you can also shoot this rifle at most pistol-caliber-only indoor ranges.”

With the sea of guns and gear being marketed to law enforcement daily, it is difficult to stand apart. But the Stag Arms Model 9 has done just that. It proved to be a solid-performing rifle with exceptional law enforcement applications. Bringing serious accuracy and reliability with a pleasant price point, Stag Arms has hit a home run. 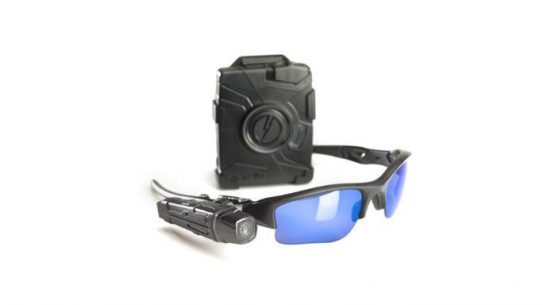 Binghamton Police To Equip Every Officer with Body Camera

The Binghamton Police Department has entered into a five-year contract Taser International that will...