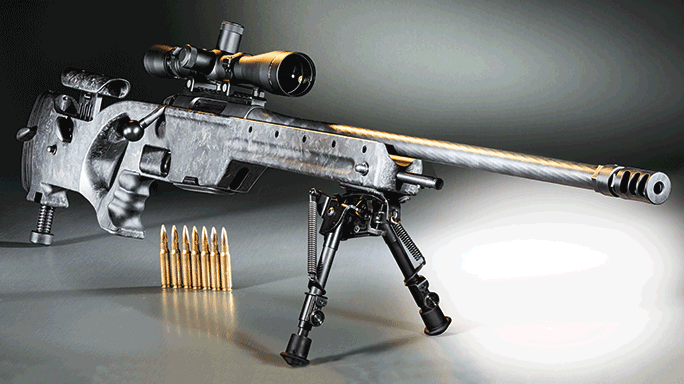 1 of 5
Photo by STEVE WOODS
Gun Review: Steyr’s SSG Carbon Bolt-Action Rifle
The SSG Carbon is loaded with next-gen features, such as a carbon-fiber thumbhole stock, an adjustable trigger and a three-chamber muzzle brake. Shown with a Leupold 4.5-14x40mm Mark 4 LR/T scope and a Harris bipod. 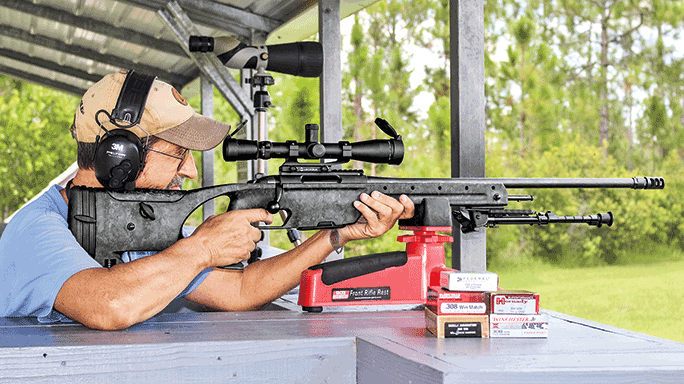 2 of 5
Photo by STEVE WOODS
Gun Review: Steyr’s SSG Carbon Bolt-Action Rifle
The author bench-tested the innovative Steyr SSG Carbon at 100 yards, 200 yards and 300 meters. Despite gusting winds, all shots were on target. 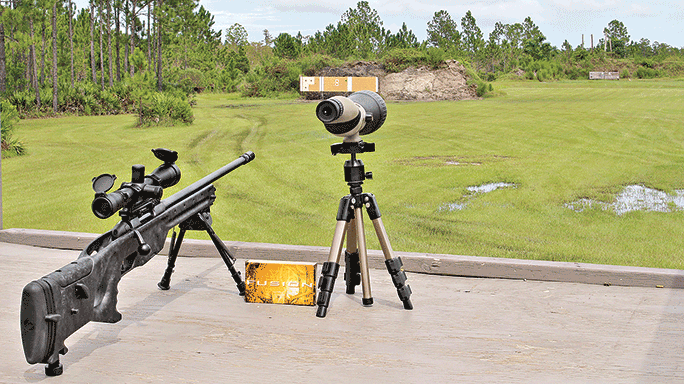 3 of 5
Photo by STEVE WOODS
Gun Review: Steyr’s SSG Carbon Bolt-Action Rifle
The SSG Carbon was designed for shooting from the prone position, with a rear spike that pairs well with a mounted bipod for solid three-point support. 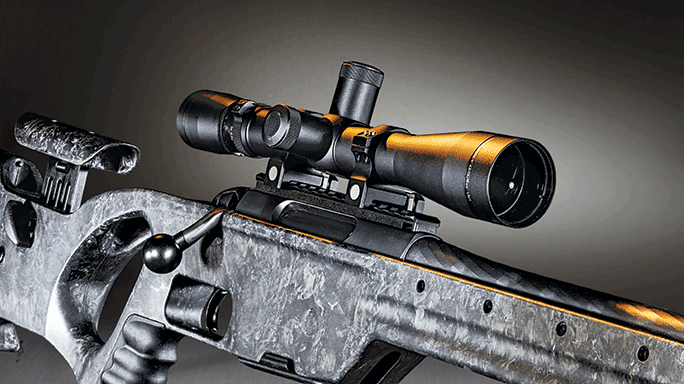 4 of 5
Photo by STEVE WOODS
Gun Review: Steyr’s SSG Carbon Bolt-Action Rifle
“A .308/7.62mm rifle designed for long-range precision shooting should be equipped with a high-quality target scope that has at least 12X magnification.” 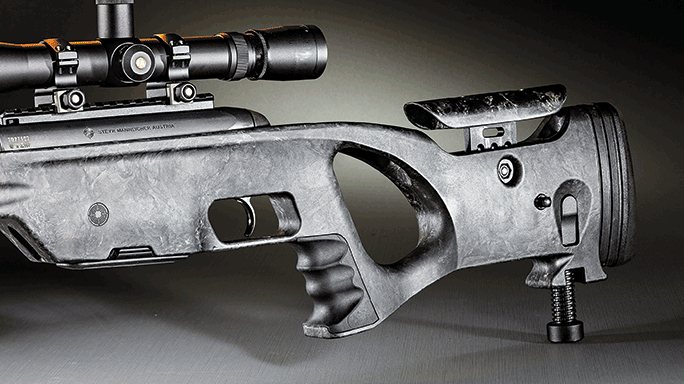 5 of 5
Photo by STEVE WOODS
Gun Review: Steyr’s SSG Carbon Bolt-Action Rifle
“The most innovative feature of the SSG Carbon is its thumbhole stock, which … has a very high tensile strength. It is lighter than aluminum and is very resistant to warping when heated.” 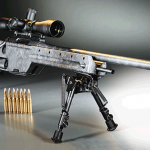 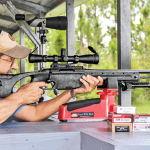 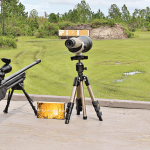 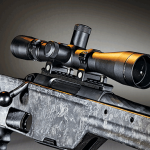 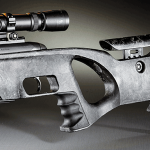 Steyr’s SSG Carbon has been so popular over the last two years that law enforcement orders for it have kept it in short supply. Today, that’s no longer the case. A new shipment of rifles has arrived in the U.S. and the SSG Carbon is now available. That’s important news for law enforcement officers as well as competitive marksmen who are looking for a precision rifle that will fit almost any shooter.

Steyr Arms (also known as Steyr-Mannlicher) has been a manufacturer of innovative firearms since it was officially founded in 1864 in Steyr, Austria. The association of arms designer Friedrich Mannlicher with Steyr around 1887 led to the development of a number of state-of-the-art bolt-action rifles and semi-automatic weapons whose operating principles were the foundation for the design of military firearms that are still used in some nations today. This heritage of innovation is clearly evident in Steyr’s SSG Carbon in .308 Winchester/7.62mm NATO.

The heart of the SSG Carbon is Steyr’s precision-manufactured barreled action, which is made of 25CrMo4 high-grade chrome-molybdenum steel. The bolt has four opposing locking lugs arranged in two sets of two. The bolt’s body is slightly wider than the lugs so it glides back and forth with very little play. The bolt face has a hook extractor and plunger-type ejector. Opening the bolt requires a 70-degree lift of the handle and somewhat more effort than rifles with 90-degree bolt lifts. The action is topped with a 20-MOA Picatinny rail that will accept a wide variety of scopes and mounts.

The 23.6-inch, free-floating barrel is cold-hammer forged and has four-groove, 1-in-12-inch-twist rifling. The muzzle is fitted with a three-chamber compensator, which is quite effective in reducing recoil. The action, barrel and compensator are finished with Steyr’s dark gray/black Mannox finish, which is highly resistant to corrosion. Overall, the quality of the metal work on my test rifle was very good, with no scratches, burrs, blemishes or poorly contoured parts.

The fire control system on my test rifle was Steyr’s innovative single-stage direct trigger. The trigger is adjustable for slack, slack resistance and pull weight. The test gun’s trigger broke very cleanly at an average of 3.6 pounds and did not require any adjustments.

The tang-mounted, polymer, wheel-type safety control has three positions and four modes: fire, safe, lock and firing pin lock. The lock position locks the bolt in place and also allows the bolt to be rotated further down to lock the firing pin. In both the lock and firing pin lock positions, a white tab rises through the safety wheel and keeps it firmly in place. This tab must be pressed downward to allow the wheel to be rotated forward into the safe mode before the bolt can be opened. Once the bolt is raised to full height, the safety selector wheel can be rotated back into the lock position so the bolt can be removed or inserted. Because of this, the safety lock is also the bolt release. When rotated forward from the lock position, a white dot appears. This is the safe position, which prevents the trigger from being pulled. Rotating the selector farther forward reveals a red dot, which indicates that the rifle is ready to fire. This safety’s operating procedure is a bit complex but very safe, and it becomes easy to use after a bit of practice.

The most innovative feature of the SSG Carbon is its thumbhole stock, which is made of a sheet-molded compound that combines carbon chips with a strong binding agent. The result is a stock that has a very high tensile strength. It is lighter than aluminum and is very resistant to warping when heated.

But there’s more to the stock than its construction and strength. It also has a number of adjustments that make it fit a broad variety of shooters. The buttplate can be removed and extra spacers can be added to provide additional length of pull. The buttplate can also be lowered or raised to fit the shooter, and the cheekpiece is adjustable for height and cant. In addition, the front of the forend has a built-in bipod mount (Steyr offers one at extra cost), while the toe of the stock has a built-in adjustable spike that can be extended downward to support the rear of the stock when a bipod is being used. Those who shoot the SSG Carbon from a support will like the forend’s flat bottom. It’s ideal for use with a shooting rail or other flat surface, like the top of a wall.

A .308/7.62mm rifle designed for long-range precision shooting should be equipped with a high-quality target scope that has at least 12X magnification. That’s because some .308 loads can remain supersonic out to beyond 1,000 yards under ideal conditions. Even under less-than-ideal conditions, a target-quality load from a .308 rifle should be effective to between 700 and 800 yards.

For this test I used a Leupold 4.5-14x40mm Mark 4 LR/T scope with a duplex reticle. This rugged optic has a 30mm main tube, scratch-resistant lenses with Leupold’s DiamondCoat 2 coating and a twin bias spring erector lens system to hold zero and assure repeatable adjustments. This scope’s 0.25-MOA adjustments, target turrets and side focus assure precise adjustments and eliminate parallax. Other features include second-generation argon/krypton waterproofing that greatly reduces the effects of thermal shock when the rifle is moved between hot and cold environments and Leupold’s Extended Twilight Lens system, which provides improved definition and luminescence in low light.

The load with the best average accuracy at 100 yards was the 175-grain Black Hills match load, but its 1.15-inch smallest group was a bit larger than the best Winchester group, which measured 0.88 inches. Steyr states that the SSG Carbon achieves 1-MOA accuracy, and the Winchester and Gorilla Ammunition loads did produce some sub-1-inch groups. However, the average of all groups fired with the SSG Carbon was 1.57 inches, which is still quite good considering that crosswinds gusted between 5 and 10 mph during most of the testing. In addition, four of the five test loads were not match-grade ammunition. Real life is not a controlled environment like a test lab, so an overall average of 1.5 MOA with off-the-shelf ammo in windy conditions is quite decent performance.

The wind was even more of a factor later in the afternoon when shooting at 200 yards and 300 meters. By that time, the East Coast Florida sea breeze had kicked in and the wind began gusting harder and shifting from south to southeast. Even so, all of the 200-yard chest and headshots were in vital areas of the target, as were the five center-mass shots fired at 300 meters.

As expected, the Hornady Superperformance ammo produced the highest muzzle velocity. At 2,959 fps, it generated 2,912 foot-pounds of muzzle energy, which is well within the performance envelope for the larger .30-06 cartridge. The Federal load also produced higher-than-expected velocity readings averaging 2,911 fps. All of the other loads were right at factory specifications.

The Steyr SSG Carbon is a very innovative precision rifle that lived up to its accuracy expectations under less-than-ideal conditions. It is very sturdy and should hold up well for field operations. 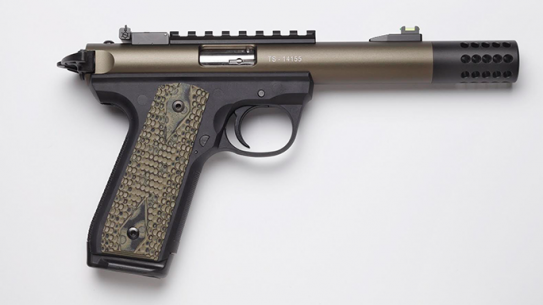 The all new Pac-Lite .22 LR Pistol from Tactical Solutions features the company's signature...