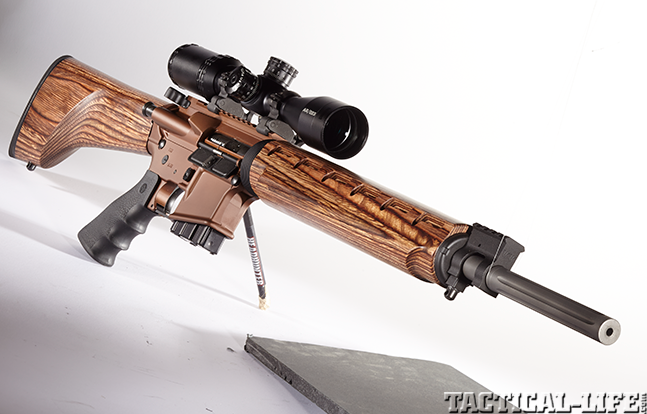 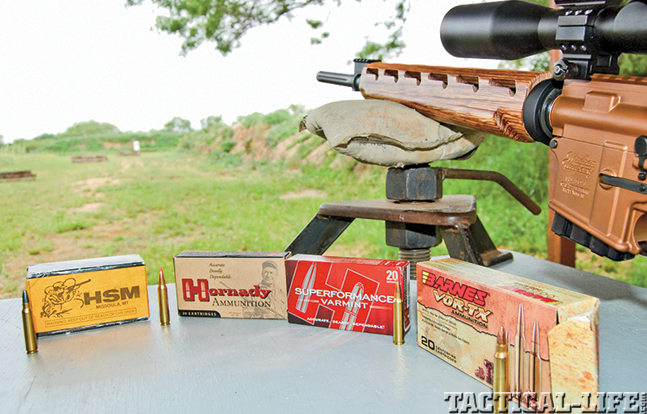 2 of 3
Gun Review: Windham Weaponry’s Wood-Stocked VEX
The Nutmeg rifle variant features upper and lower receivers finished with a coyote brown anodizing—and the rifle, with its .223/5.56mm Lake City chamber, is accurate enough to take down quick, wiley predators like coyotes and wolves. 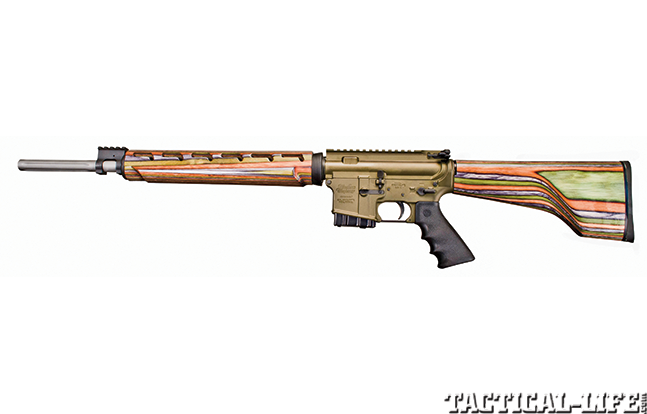 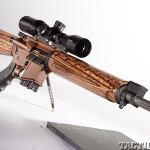 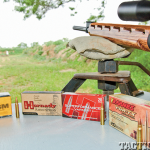 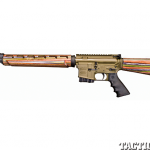 This was a matter of function over form. Eugene Stoner’s original patent application highlights the design’s goal of light weight. Working for ArmaLite, a division of Fairchild Engine and Airplane Corporation, in the 1950s, Stoner designed the rifle using “space age” materials from the aerospace industry. In time, and after initial teething problems, Stoner’s odd little rifle would soon become a respected design

In addition to being the longest serving rifle in U.S. military history and issued by militaries in over 80 countries, AR-15s dominate Service Rifle and practical shooting competitions.

While a newer company, Windham Weaponry actually has a long record of building rifles. The company calls itself “America’s newest rifle manufacturer with decades of experience” and has a staff that has been building AR-15s for over 20 years. After Bushmaster was bought out by the Freedom Group in 2006, the operation was moved from its original home in Windham, Maine, to New York in 2011. Richard Dyke, the original Bushmaster owner, had signed a non-compete clause that expired at about this same time. Dyke still owned the now-deserted Maine property and had kept contact with all the original employees, who were now laid off after the move. Finding there was still interest in manufacturing in Windham, Dyke quickly secured financing and started rehiring employees. A few months later, the first production models of the new Windham Weaponry line were being delivered. Within 18 months, the company had brought back almost 70 employees and was fully back in business under its new name. Even Maine Governor Paul LePage is a customer.

Windham Weaponry also has a facility in Arizona through a partnership with Patriot Ordnance Factory (POF-USA) and JC Machine & Motorsports. Windham’s carbon-fiber rifles are manufactured there, along with components for rifle production at both locations.

Windham rifles feature 4150 chrome-moly-vanadium steel barrels that are chrome lined for long wear and ease of maintenance. The aluminum receivers are made of 7075-T6 aircraft aluminum and protected by a hardcoat anodized finish. The company offers a warranty against all manufacturer’s defects in material and workmanship for the lifetime of the purchaser, transferable to any subsequent buyers.

I recently got my hands on a new VEX—short for “Varmint Exterminator”—Wood-Stocked Series rifle from Windham Weaponry. These rifles feature a uniquely milled stock and vented forend made of laminated wood. Two versions are available. My test model features a bright brown “Nutmeg” coloring reminiscent of birch. The laminated wood stock and forend is a strong veneer enhanced with coyote brown anodizing on the upper and lower receivers. The “Pepper” version is the same, strong veneer but more gray with a black anodized finish. Windham’s concept is to get away from the military look of black aluminum and plastic while offering the same, good shooting features the self-loading AR-platform offers.

Despite its radically enhanced appearance, the Windham VEX Wood-Stocked Series handles just like the more familiar black, plastic AR-type rifles. The Nutmeg and Pepper rifles are constructed with features known for their performance, such as their heavy Colt barrels. Except for the color, the upper and lower receivers of the two rifles are the same, as is the action. At the heart is a heavy, full-diameter, fluted, matte-finished, 1-in-8-inch-twist, 20-inch, precision 416R stainless steel barrel with a Compass Lake-spec’d chamber. The VEX can safely fire any 5.56mm NATO round, however, match (or varmint) grade .223 Remington ammo is recommended.

While match .223 Remington ammo is suggested, Windham reports that military 5.56mm NATO rounds, such as the M855 and M193, will chamber and function in the VEX without problems, though the company recommends checking the primers to make sure they aren’t backing out, popping out, severely flattened, or other signs of excessive pressure. Some lots of foreign-made SS109 are known to run hotter than U.S.-issued ammunition. If you want more precision than a rack-grade M16A2, things need to be a bit tighter, and VEX rifles are intended for precision.

The top of the receiver has the expected Picatinny rail. As a nice addition, Windham includes optics riser blocks. This allows the user to mount their optic a bit higher if the objective bell of the desired scope is larger and requires more clearance, a possibility with a higher magnification optic used in varmint hunting.

Keeping with the VEX’s varminting designation, I opted to test four suitable varmint loads: HSM’s 42-grain Calhoon hollow points, Hornady’s 53-grain V-MAX Superformance and 55-grain V-MAX ammo, and Barnes’ 55-grain VOR-TX TSX rounds. For sighting, I used a reliable SWFA SS 10×42 30mm scope. For all of the testing, I fired the VEX from a benchrest at 100 yards.

Upon shouldering and shooting the VEX, I was immediately reminded why traditionalists enjoy wood-stocked rifles so much. Having spent so much time shooting synthetic-stocked rifles, and not just AR-15s, I had almost forgotten how good a well-built wood stock feels. I’ll be the first to note the potential performance value offered by synthetics, but none of them have the same, for lack of a better word, warmth that wood offers.

Beyond its pleasing feel, the VEX shoots with precision. The Hogue OverMolded grip provides ideal access to the clean-breaking trigger, and the Boyds’ rubber-padded stock provided a com­fortable, no-slip mount. Thanks to the solid wood furniture and heavy barrel, felt recoil was nearly non-existent. After bore sighting, the first shot landed within a few inches of the 1-inch square I used for a mark. A quick sight adjustment put the second round into that square. That was the extent of the break-in period. The rifle just wanted to shoot. Not surprisingly, there were no malfunctions of any kind.

While the VEX is designated for varminting and is more than accurate enough for the purpose, the chambering and rifling is set up to handle the .223 Remington heavyweights as well, making the Windham VEX a very versatile .223. I make no claims to being a good rifle shot, especially with regards to benchrest testing, but a self-loader that can hold 1.5 MOA with its worst group using ammo it seemed to like least is a solid performer. Of the ammunition tested, this VEX thrived on Hornady 55-grain V-MAX rounds. With this ammo, the worst group of the session was still less than 1 MOA.

Shooters will buy a Windham Weaponry VEX Wood-Stocked Series rifle for its unique approach to more traditional looks, but they’ll keep it for the performance. 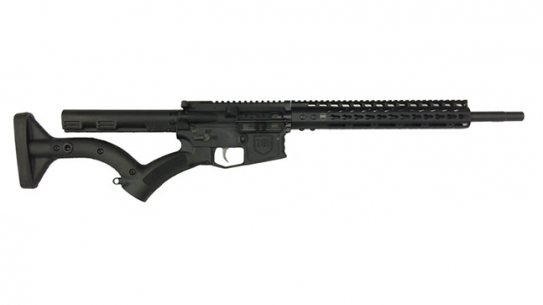 The Typhoon series from Dark Storm Industries is chambered in 5.55 NATO and features...