by Chad Thompson
in Guns
0

0
SHARES
292
VIEWS
Share on FacebookShare on Twitter
Truth be told, most of us gun writers today have become somewhat pessimistic about “new” or “improved” claims by some gun manufacturers. This isn’t to belittle or downplay some of their claims or offerings, but it stands to reason that as often as we are exposed to various firearms, we can get a little jaded and aren’t going to be as infatuated with a small change here or a different detail there as we maybe should be. 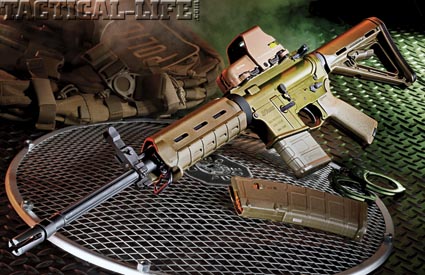 Accurate, reliable, and upgraded with Magpul accessories, the RGuns TRR15A3 will serve any officer well. Shown with an EOTech HWS.

With that being said, when I heard about and received this new TRR15A3 from RGuns and opened the case, I was floored by the appearance of this rifle. Even before I opened the standard black plastic case, the employees at my local FFL dealer had expressed to me that they were impressed with the appearance of this rifle. At first glance, I saw why they were gushing. Simply put, this is one beautiful M4-style carbine. It isn’t one thing or another that I can put a finger on that makes it so aesthetically appealing, but it is instead the whole picture that makes this thing perfect in appearance. While I firmly believe this gun is more than the sum of its parts, it is these very same parts put together as they are that make it what it is. And it is a truly handsome rifle that is ideally suited for the law enforcement officer looking for a tactical carbine. 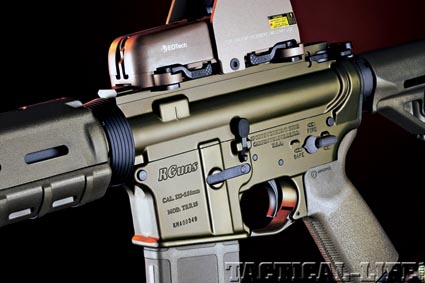 RGuns coats the TRR15A3 receiver in their distinctive Olive Drab finish, and they offer several other custom color options.

Gun Details
First of all, the green-hued finish on this TRR15A3 rifle is unlike any other I have seen applied in the past. I know that colored offerings for M4-style carbines aren’t anything new, nor are camo offerings, but this color is a perfect blend of function and style. RGuns calls this their Olive Drab finish, and it is immediately eye-catching. To match the Olive Drab receiver, RGuns has fixed this rifle up with numerous Magpul parts in Flat Dark Earth, and they come together beautifully. This rifle came with an integral Picatinny rail on top, making the addition of optics a breeze, as well as a YHM flip-up front sight and a Magpul MBUS rear sight. In addition to testing it with the stock “iron” sights, I also tried it out with an EOTech HWS non-magnified electronic sight.