Chiappa Firearms chiappafirearms.com new Rhino Revolver has finally cleared all the import requirements and tests for sale in the United States and are now arriving for distribution by MKS Supply, the exclusive marketer for the Rhino.

The first of these revolutionary revolvers will be the 2-inch barrel model. Within the next 60 days it is expected that the 3, 4, 5, and 6-inch versions will clear U.S. import and ATF tests as they are simply the same gun with longer barrels.

The Rhino, especially in the 2-inch version is an unusual looking firearm but form really does follow function. The recoil and muzzle flip from hot loads is greatly reduced thanks to the bottom chamber firing position. It just Works! And people who have shot it are amazed by the glass smooth action of this revolver. 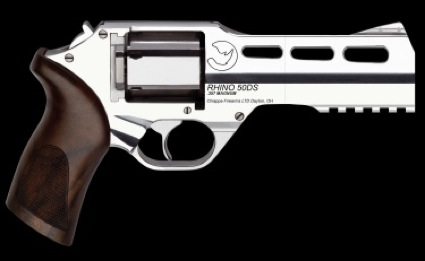 Called the Rhino (sort of resembles one too) you will first notice that the barrel is actually at the bottom of the cylinder. The gun is designed to fire from the bottom chamber of the cylinder (6:00 position not 12:00 as with other revolvers). The new design resulted in improvements of the internal mechanisms over conventional revolver designs yielding up incredible reliability, a super-smooth action and improved safety.

The Rhino’s low barrel design ergonomically shifts recoil energy into the center of the palm of the hand and in line with the forearm thus greatly reducing the effects of felt recoil. Traditional revolver design (semi-autos too) place the barrel above the hand. When the gun is fired the leverage applied by that design forces the recoil into the web area of the hand between the thumb and trigger finger causing significant muzzle snap. Not the Rhino! Due to this new design a shooter can now fire very fast and accurate repeat shots.

The Rhino is designed to reduce its carry profile. This design is even carried into the hexagonal shaped cylinder making for a flatter profile when carried (especially handy for legal concealed carry). Chiappafirearms.com.

The Rhino looks different, so what’s the deal? The looks are the direct result of the innovative improvements. Then again who would have thought a few years ago that fiberglass stocks (in color and with patterns) would one day be routinely accepted on traditional wood sporting rifles or that pink revolvers would be a rage?

Basic Specifications (and more later as other variations or models develop):

-Stocks: Composite rubber or wood. One piece, retained by a single screw at the butt.