Jim Fuller’s Rifle Dynamics (RD) is one of the premier AK gunsmithing companies in the U.S., one of the few that is truly qualified to improve the AK platform beyond its out-of-the-box potential, without diminishing its hell-and-back reliability, simplicity and ruggedness. Jim found himself impressed with the AK-47 early on. He had been attracted to the simplicity and reliability of most Soviet-block weapons, even while most people were discounting Soviet arms as the enemy’s inferior tools. This, along with the fact that the AK was being neglected by many gunsmiths, led Jim to deepen his study of the AK operating system, which he began in the early 1990s. Jim believes the AK is the most dependable fighting rifle ever produced. While it may not be as inherently accurate as other rifles, the AK is still plenty accurate for the job it was designed for: combat. RD is a 07FFL/SOT manufacturer, which permits it to work on machine guns, suppressors, SBRs and SBSs and to sell them as an authorized dealer. 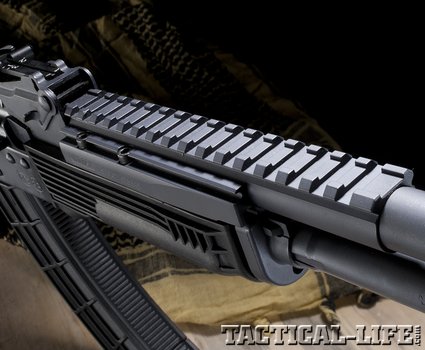 Proof that the AK-series of rifles are gaining acceptance in the U.S. is the increase in the number of gunsmiths, ammunition manufacturers and aftermarket accessories catering to AK clientele. Jim is currently working on an RD AK signature line that will encompass many upgrades and modifications over factory-standard AKs. These improvements are based on Jim’s experience and on feedback from customers. Custom AK projects will still be the focus of RD. However, with so many customers responding to Jim’s idea for a solid, no-frills AK fighting rifle, Jim decided to invest in putting one into production. These AK-47s will benefit from Jim’s years of experience improving and customizing his customers’ rifles. Jim explains, “We are doing four different production rifles based off the imported sporterized Saiga at this time. The guns are basically the same except caliber (7.62x39mm and 5.45x39mm) and stock configurations with either standard-triangle side folder or Magpul CTR with our new AK/M-4 stock adapter. All RD models will have our custom front end with Bolten gas block. The muzzle device will be a Battle Comp AKBC on the 7.62 guns and Battle Comp 2.0 on the 5.45 guns. Tapco G2 triggers will be used in the Saiga conversion. A Fuller-designed rear sight is included, as well as a U.S. PALM AK Battle Grip. The RD AK-production AKs will have an Ultimak upper rail installed.” Jim added, “There won’t be any other options since these are production rifles. The quality will be what you would expect from one of our custom builds, but we have to limit options in order to produce them in a timely manner.” The current RD production AKs will be labeled RD 700 for 7.62x39mm rifles and RD 500 for 5.45x39mm—simple enough. 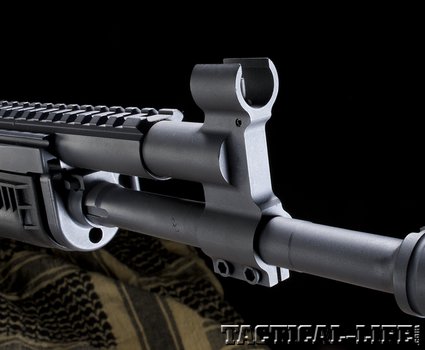 The particular RD 700 Series AK I tested belongs to Panteao Productions President and CEO Fernando Coelho. Panteao Productions and Jim Fuller were collaborating on an AK Armorer’s DVD when Fernando was lured by Jim to the AK. Fernando’s Fuller AK rifle is chambered in 7.62x39mm and utilizes the RD AK/M4 stock adapter and the Magpul CTR rear stock. The RD 700 AKs all benefit from a custom front end consisting of a Bolten gas block offered by Venom Tactical. The Bolten gas block combines the front sight and gas block into one unit. The RD 700 AK’s barrel length is shortened, and the flash suppressor is permanently pinned to the barrel. These qualities give the rifle an entirely new feel when shooting and on the move. These modifications lighten the front end, which shifts the gun’s center of balance closer to the shooter’s body, making the rifle much more controllable in movement and as short as it can legally be without needing an SBR tax stamp. The overall length of the Saiga chrome-lined barrel with a pinned flash suppressor is slightly over 16 inches. The front-end work is complemented by an Ultimak gas-tube scope rail, a solid mount for any forward-mounted optic.