The popularity of pistol-caliber carbines is obvious in today’s market. However, a few stand out for the unique features they offer. In this article, I’ll take a look at three 9mm takedown carbine options that can be stowed for additional protection on the hiking trail, as part of a get-home bag or kept as part of a vehicle’s survival gear. All three guns feed from Glock magazines, making them compatible with many self-defense pistols being carried today. Let’s take a look. 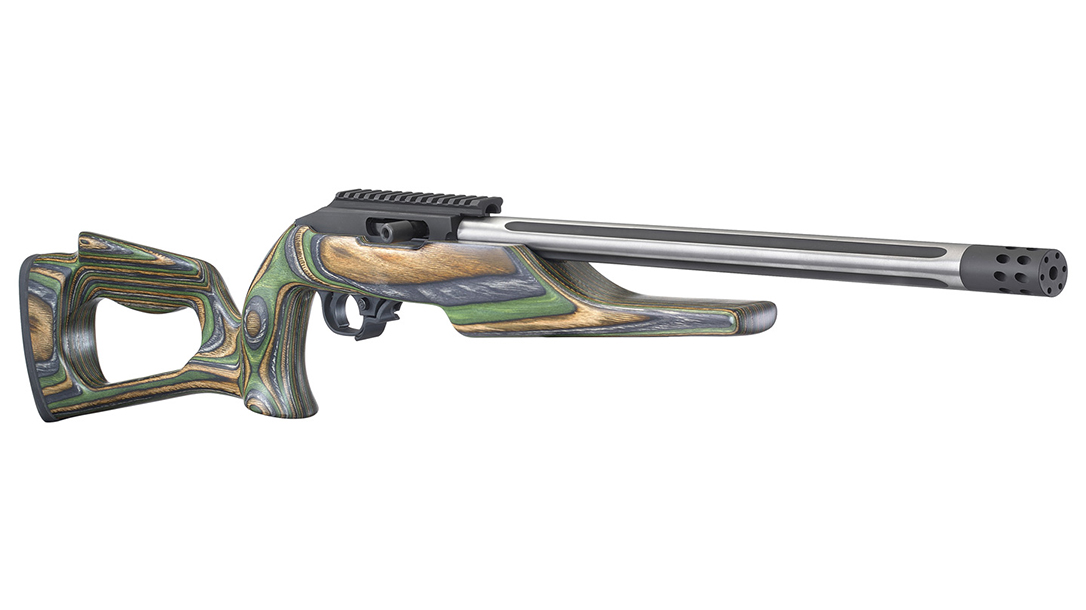 Just Right Carbines (JRC) manufactures American-made pistol-caliber carbines that are available in a range of chamberings. In addition to the Takedown model tested here, the company also offers models with accessory rails and others designed for harsh marine environments. JRC rifles appear similar to AR-15s but operate on a proprietary blowback design. Many mil-spec AR parts will work in this gun, but not all AR parts will. For example, you could drop an ALG Defense Advanced Combat Trigger (ACT) into the gun, but you may not have the same success with a one-piece, drop-in unit due to hammer differences.

The KelTec SUB2000 is an extremely popular pistol-caliber carbine with a good reputation. One of its defining features is the ability to fold in half for compact storage. The SUB2000 is also a very lightweight gun without a lot of bulk. Many of these guns have found homes in survival bags across the country.

Unlike the other carbines in this shootout, the magazines feed from the grip of the rifle in the same way as semi-auto pistol mags. The SUB2000 is a completely proprietary design, but there is aftermarket support via accessories and upgrades to make it your own. KelTec also threaded the barrel to accommodate a suppressor or other muzzle device, and the front post sight is paired with a peep-style rear.

Rounding out this shootout is the Ruger PC Carbine. Sporting black synthetic furniture, this gun has the most refined appearance of the three with a traditional stock and no pistol grip. The American-style stock is fixed, but the length of pull can be adjusted with spacers. Along with a blade front sight and a ghost-ring rear, it also has a Picatinny rail on top of the receiver for the addition of an optic. Unique to this gun is the included interchangeable magazine well adapter, which allows you to use either Ruger’s SR series magazines or Glock-compatible magazines.

All three rifles ran without any problems using the included magazines. On the range, I ran 12 different loads through the guns, including those with FMJ and JHP bullets and both brass and steel cases. I used ammunition from Federal, L-Tech Enterprises, Liberty Ammunition, Remington, Sig Sauer, Speer and Winchester.

To see if magazine selection had any impact on reliability, I shot 100 CCI Blazer Brass 124-grain FMJs through each gun using one of my Glock 17 magazines. I followed up with the same test using Elite Tactical Systems (ETS) and Magpul magazines. Again, all three guns functioned flawlessly.

Reliability is king in any gun, but accuracy is a close runner-up. With the KelTec SUB2000, I achieved five-shot groups of about 1 to 1.25 inches at 25 yards from a bench. At 50 yards, my groups opened up a bit, and 2.25 to 3 inches was standard. While this was a respectable performance, it wasn’t quite as good as the other rifles.

Since JRC does not include factory sights on its Takedown gun, I used a 1X Trijicon MRO with a 2-MOA red dot. Groups of 1 inch or smaller at 25 yards were the norm. Pushing out to 50 yards, the groups opened up but stayed in the 1.75- to 3-inch range depending on the ammunition.

I was most accurate with the Ruger PC Carbine. With this gun, I kept most groups under 1 inch at 25 yards. At 50 yards, the spread widened, but I still managed to keep all of my shots between 1.25 and 2 inches.

The JRC Takedown uses a simple design whereby you merely unscrew the handguard and the barrel slides out. No tools are needed, and it’s reassembled in the same fashion. A groove in the receiver allows you to slip the barrel back into the correct place every time. I found it takes about 15 seconds to assemble, making it the slowest of the three guns.

Ruger uses an elegant method of separating the gun halves. Underneath the barrel assembly is a lever. You pull that and twist the assembly about 45 degrees to separate the receiver from the barrel. Reconnecting the two just means reversing that process. It’s quick and efficient. However, I did find I had to use the fine-tuning procedure described in the owner’s manual for smooth reassembly. Once that was done, the process worked flawlessly for the rest of the evaluation. The speed of the Ruger PC Carbine takedown process lagged slightly behind the KelTec’s in reassembly.

The fastest rifle to take down was the KelTec SUB2000. You simply pull down on the back of the triggerguard, and the rifle folds in half. Once folded, the gun is secured by a tab under spring tension. Pull on the tab and you can snap the rifle open in less than a second. The only drawback to this takedown method is that you cannot fold the rifle with an optic installed unless you pick up an aftermarket solution like an M-Carbo mount.

The SUB2000 is a utilitarian gun, not an exquisite sporting arm. I found the action’s movement and noise transmitted directly into my head, and the buttstock was the least comfortable of the three guns. However, the SUB2000 had the best balance of the three rifles and is more than 2 pounds lighter than either of its competitors.

If you like the feel of an AR-15, the JRC Takedown rifle will suit you well. It shares many of the ergonomic features of an AR, including a pistol grip and M4-style stock. The weight is forward on the gun, which helps dampen muzzle rise but might be a bit uncomfortable for shorter shooters.

If you prefer a traditional rifle over a modern sporting rifle, only the Ruger has a classic look. With a rubber buttpad as a standard item, it does the best job at taming the relatively mild recoil of the 9mm cartridge. The stock allows for the addition of spacers to adjust the length of pull. The full stock is comfortable to shoot, and men with beards will have no problems with pulled whiskers.

Winner: Tie between the JRC Takedown and Ruger PC Carbine.

Even though the Ruger PC Carbine is the newest gun in this shootout, it has a growing base of shooters, and third-party companies are creating products to supply them. This gun also has a threaded barrel for a suppressor and a short Picatinny rail under the barrel for the addition of a light or other accessory. A Picatinny rail on the receiver allows you to quickly attach an optic.

KelTec uses a forend that includes both Picatinny rails and M-LOK attachment points. The Picatinny rails are at 6 and 12 o’clock while the M-LOK mounting locations are along the sides. Due to the popularity of this rifle, there are a number of companies that make accessories for the SUB2000 niche.

Even though it isn’t a true AR variant, the JRC Takedown can accept many mil-spec AR parts for easy upgrades. Also, you can upgrade the rifle with a KeyMod handguard assembly or install a caliber conversion kit to run .40 S&W or .45 ACP ammo. A Picatinny rail runs along the top of the receiver for the installation of virtually any optic, and the gun has a threaded barrel.

With an MSRP of $149 less than the other rifles, the KelTec SUB2000 easily takes this category.

Ruger’s warranty position is a bit nuanced due to federal law. Ruger does not provide a written warranty to buyers to avoid the intricacies of complying with the law. While I personally have heard positive accounts of Ruger working with customers on repair work, the lack of any written warranty means you may have limited recourse if you encounter a problem.

JRC offers a limited lifetime warranty on the Takedown. The warranty covers the original purchaser of the new firearm only. Registration is not required, though the company encourages it to facilitate any warranty transactions you may need.

KelTec backs the original owner of a SUB2000 with a lifetime warranty. You do not need to register the gun with the company, but you will need to have a copy of the sales receipt showing where you purchased the gun.

Winner: Tie between the JRC Takedown and KelTec SUB2000.

Frankly, I like all three 9mm takedown carbine options here. They all were perfectly reliable, and their takedown functions worked well. Additionally, they were accurate enough to be employed as survival rifles for self-defense or to take small game within 50 yards. Beyond that, the question of which is best becomes an intensely personal one based on your own needs and desires.

Winner: All three. Pick the one that suits your needs and get to the range.