by Will Dabbs MD
in Accessories, Gear, Guns, Rifles
0

Jack spent more than 20 years in the Queen’s service, much of it with the SAS. As a private military contractor (PMC) in Iraq, he made $500 a day pulling security for journalists, transient diplomats and civilian contractors making up the enormous logistical tail demanded of modern war. The work was grueling and dangerous.

On this particular day, it was journalists. Their armored Land Rover made poor time through the typically insane Iraqi traffic, but Jack could read the terrain, the roads and the people. His first inkling that something was wrong was when he noticed a taxi swerving madly and approaching rapidly from the rear. The windows were down, and a pair of AK barrels peeked tepidly out of the right side. 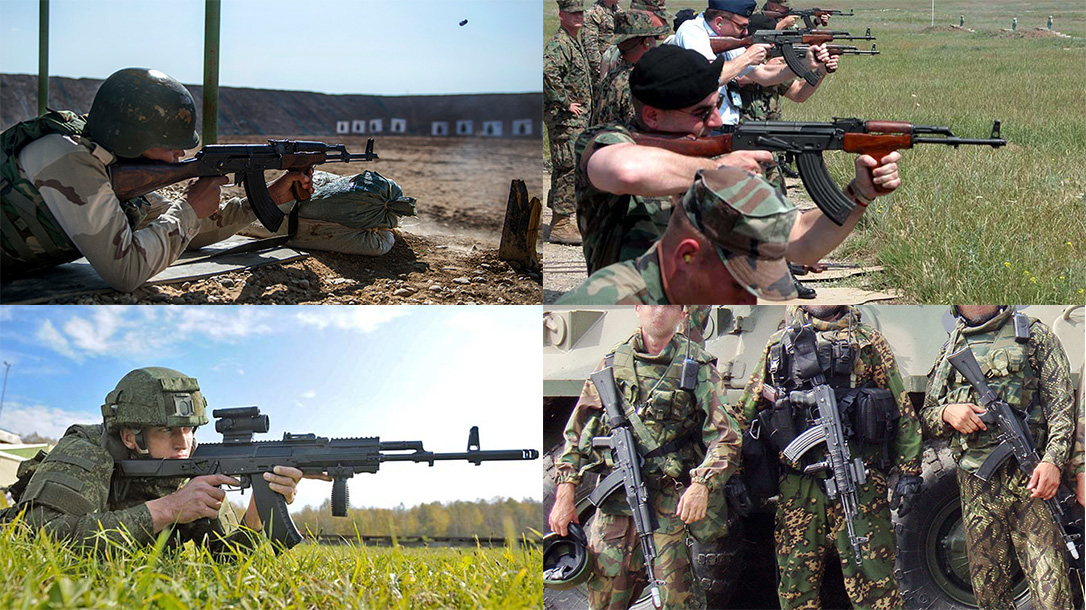 Announcing his suspicions to his mates, Jack pushed his principals to the floor, turned backward in his seat and oriented his own Kalashnikov through the window. At this stage, contractors were using what they could find. This soon after the invasion, ComBloc guns were cheap and everywhere. M4s and M249s would come later. For now, PMCs made do with whatever they could scrounge.

The taxi got close enough for Jack to see the two insurgents behind the rifles as they craned to get a clear shot. Satisfied that this was real, he shifted slightly, centered his front sight on the driver’s side of the taxi’s windshield and stroked the trigger three times. The taxi slid sideways as the two insurgents fired long automatic bursts that tracked up and over the armored SUV. Jack’s driver stomped on the accelerator, and the heavy vehicle pulled away. The taxi spent itself against a light pole. The journalists had been in-country two hours, and they had their first story.

Few enlightened gunmen would contest that Comrade Kalashnikov’s eponymous Russian assault rifle is the most reliable shoulder-fired infantry arm on the planet. Birthed some 70-odd years ago when space travel was the sole purview of Saturday afternoon movie serials and computers were as big as office buildings, the AK rifle represents the very pinnacle of mid-century technology. But while an AK will indeed shoot every single time you squeeze the trigger despite the most egregious mechanical abuse, its ergonomics are quite frankly hideous.

Ergonomics is the study of how machines interface with the human form, and the AK sucks at it. Label me a heretic if you must, but no human who ever lived fit the AK rifle well. The rigid reciprocating charging handle is tough to manage with the weak hand when firing right-handed, and the sights harken back to the days of fetid trench warfare in World War I. The rifle becomes an area weapon system as soon as the sun goes down, and the safety selector is just plain wrong.

Because of its near-universal distribution, many a professional soldier still employs the AK as a primary weapon. If more modern iron is not available, if the logistics tail is inadequate to support more advanced systems, or if an AK is simply the only tool in the toolbox, there remains a massive market for cool-guy stuff to optimize this 70-year-old rifle into something a bit more elegant. Additionally, on this side of the pond, the AK remains one of the most popular modern sporting rifles on the American market. When an AK becomes your heater of choice, it makes sense to add some tactical bling to drag the old girl into the 21st century.

In addition to having one of the most awesome company names in the industry, Chaos Inc. has been making forearm rails, optics mounts and muzzle attachments for a variety of weapon systems since 2008. Its products are exquisitely well engineered, superbly executed and unflinchingly effective. Available for both M-LOK and KeyMod mounting systems, the company’s accessories optimize legacy Kalashnikov guns into something that remains competitive today.

The Chaos Inc. AK scope rail attaches via the gas tube retention pin in the front and the top cover retention catch in the back. You will have to grind the flange off of your existing gas tube attachment pin with a hand grinder and tap it out with a punch. The new Chaos component slides right in place. I had to thin the pin a bit with my Dremel tool to snap the gas tube assembly in place, but none of this was particularly challenging. The length of the mount is easily adjustable to accommodate variations among guns.

The scope mount is rigid and reliable. With a Leupold 1.25-4x20mm VX-R riflescope mounted, a Kalashnikov rifle so equipped is light-years ahead of its competition. This state-of-the-art, variable- power combat optic is lightweight, robust and versatile. And it’s worth noting that Leupold glass is made in America and remains a world leader in combat optics.

The Chaos Inc. Apollo forearm rail is made from hardcoat anodized aircraft-grade 6061-T6 aluminum and is long enough to mount any imaginable accessory. There are notoriously wide tolerances among AK manufacturers, and the Apollo rail system is designed to accommodate most mechanical variations. Some high-end AKs exhibit Old World craftsmanship and impeccable quality. By contrast, guns birthed in my workshop from shot-out surplus kits would embarrass the most irresponsible gunsmith. Chaos accommodates most all of them.

The rear portion of the rig mounts to the receiver in the manner of a conventional handguard. The forward portion clamps rigidly around the barrel and combines with a pair of setscrews for a tight, no-wiggle fit. You will have to carve the existing forward sling attachment point off with a Dremel grinder to accommodate the forearm, which has its own new sling point, but that took me less than five minutes. The fit and finish were impeccable. The lightweight aluminum construction ensures that the platform remains both rigid and svelte.

I slipped an Archangel OPFOR collapsible stock and pistol grip in place to complete the transformation. Archangel is a leader in the busy market of aftermarket stocks and accessories for good reason. Its products are well reasoned, effective, reasonably priced and nigh indestructible.

As a baseline, I engaged targets from contact ranges out to 100 meters with our otherwise unmolested Romanian AKM. The sliding tangent rear sight was state of the art half a century ago, and it is optimistically adjustable out to 800 meters. When fired from a rest, the iron sights allow decent precision.

At close ranges, it is generally preferable to align the weapon grossly over the sights and remain satisfied with being close enough. The unadorned rifle is actually a bit light for its serious .30-caliber cartridge and bounces around considerably, particularly on full-auto. I could keep most of my rounds on a standard silhouette out to maybe 30 meters but had to concentrate to keep my hits on target much farther than that. After dark, the unmodified AKM is about as precise as a claymore mine. 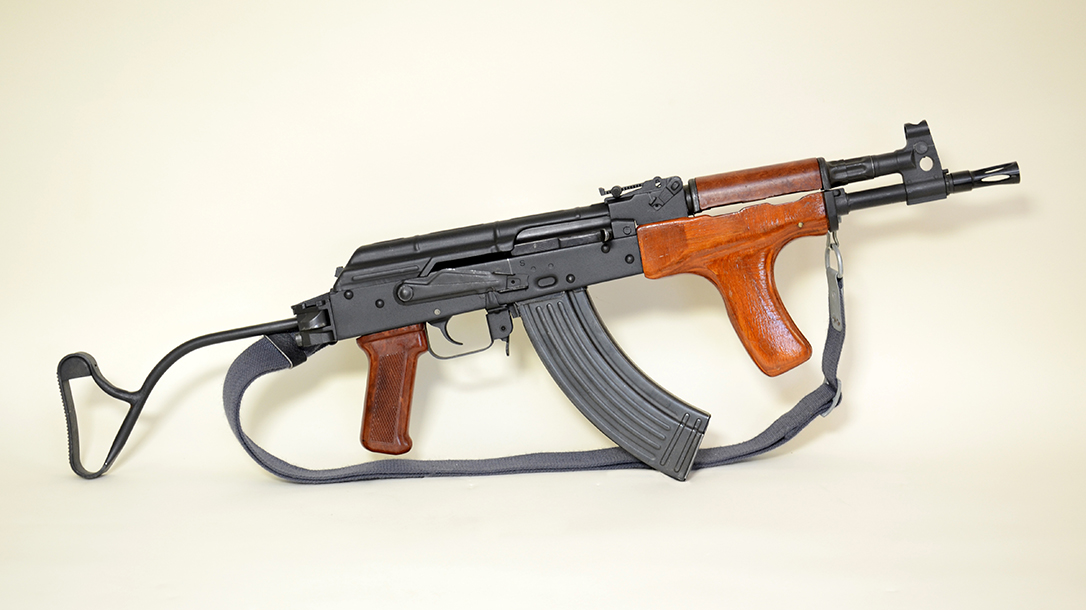 Once Chaos Inc., Leupold, Archangel and SureFire came into play, the rifle is an entirely new beast. The nice Leupold tactical glass is spin-adjustable from 1.25X up to 4X. The reticle incorporates a fiber-optic component that projects a red dot into its center. Activation and intensity are both managed through the same simple push button. Using the red dot at the lowest power allows for both-eyes-open, close-range target engagements that are fast and effective. Double-taps out to 50 meters were fairly easy. Zipping the scope up to 4X makes all the difference in the world at around a football field or farther.

The SureFire X400 combination light and laser turns the otherwise pedestrian AKM into a night-capable, all-weather tactical machine. Both the laser and the light are activated via the same thumb switch. A separate pivoting switch selects the light, laser or both. The green laser is no more powerful than a comparable red version, but the human eye is better stimulated by the green hue. As a result, the laser is spot on—pun intended—in dim light out to 100 meters or more.

All serious shooting took place on semi-auto. The same drills with the selector set on the hallelujah position provided a pleasant surprise. Full-auto fire in a rifle-caliber platform looks cool in the movies but is typically fairly worthless out here in the real world. Personally, I’d much sooner be chased by some goober with a full-auto MAC-10 than the same miscreant with a properly zeroed bolt-action deer rifle. However, with all the cool-guy stuff in place and a 75-round drum on board, the resulting package offers some truly mad capabilities. Where the stripped rifle is unpleasant and tough to control, our new rugged amalgamation tames all that power splendidly.

Kalashnikov rifles are ubiquitous in the sorts of places that attract terrorists and journalists with a death wish. Additionally, entire armies still run these rifles and will continue to do so long after my grandchildren have begun collecting Social Security. AKs are also ubiquitous in American gun shops wherever men still remain free. If you find yourself in possession of a serviceable AK rifle and an Internet connection, a little well-reasoned tactical bling will substantially improve its performance.

The AK in its original .30-caliber chambering has plenty of power and remains the gold standard for firearms reliability the world over. At reasonable ranges, the argument could be made that little is more effective. By injecting a little Chaos into your favorite AK, you can remain competitive against the most advanced tactical firearms on the planet. You also get a high-tech heater that would look right at home on the set of your favorite science-fiction movie.