On the Range With the Optic-Ready Anderson AM15 Sniper Rifle

If the history of various companies that have been called “Colt” over the past century and a half is any kind of business barometer, receiving a U.S. Government military contract seems to be a terminal disease. Receiving and then losing a military contract, and the accompanying manufacturing buildup and decline, is a recipe for bankruptcy. The same fate befell Remington at the close of the Civil War. On the other hand, a study of Anderson Manufacturing, a comparative newcomer to the AR-pattern rifle market, seems to be a recipe for success. 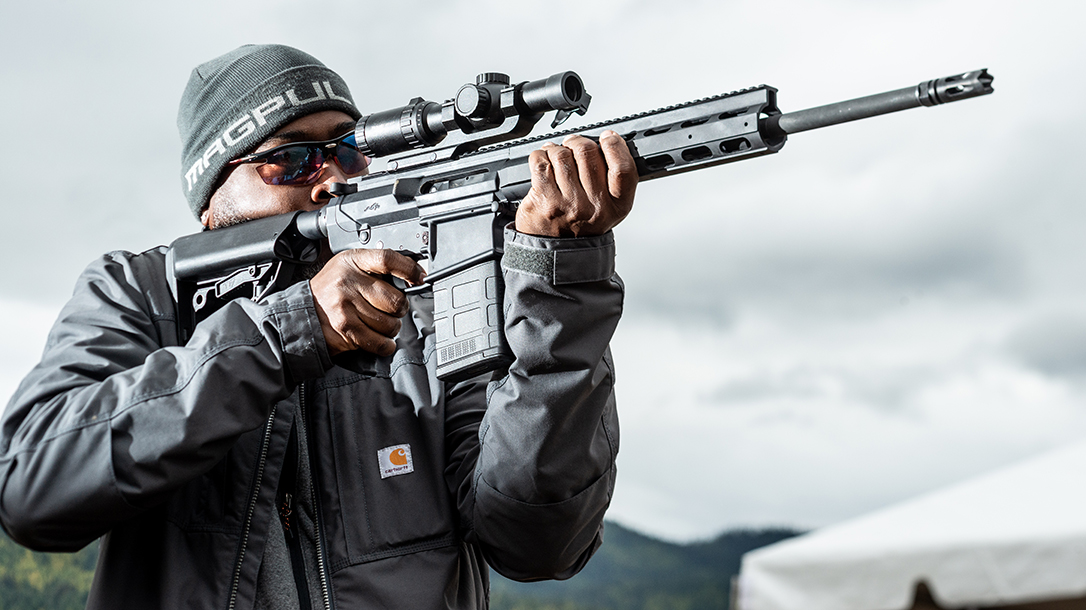 Anderson Manufacturing AM-10 Hunter: A Unique Approach to the AR-10

Just last year, Anderson Manufacturing built and sold more than 400,000 AM-15 rifles. This number puts Anderson Manufacturing solidly atop the AR mountain. A 40-year-old company, Anderson started out making gun parts for other gun companies 10 short years ago. A year later, it made sense to offer their self-branded AR-pattern rifles and the AM-15 was born. Over the past decade Anderson has expanded their lineup to include 10 .308 variants, two 9mms and 28 different versions that use the AR-15-pattern magazines. The latest addition to the Anderson lineup is their AM15 Sniper Rifle, and several gun writers got a chance to pull its trigger at the Athlon Outdoors Rendezvous in snowy Idaho in early October.

The fact that Anderson Manufacturing is building more AR-platform rifles than any other company is bolstered by their exclusive no-oil-needed gun metal treatment. RF85 metal treatment provides lubricity and reduces friction-induced heat.

“We can tell a difference in our guns,” Anderson Manufacturing VP Tom Steffner said. “We’ve got something nobody else has with the RF85 process. We just jumped in with both feet and started building guns. The RF85 treatment isn’t marketing hype. This is something that has been scientifically proven by Oak Ridge National Laboratories.”

RF85 isn’t a surface coating, but instead adds a calcium component throughout the metal. In a laboratory setting, a piece of the treated metal beneath the surface layer was bombarded with electrons to emit gases yielding the metal’s component materials, and the lubricating calcium-like material was detected. In other words, the RF85 treatment won’t wear off with use.

Applied to cutting tools, which is a primary use for the RF85 treatment, they still retain their lubricity with the wear of the tool. The same treatment applied to metal reduces heat from friction, too. Medical saw blades used for cutting off the bottom of the large leg bone in knee replacement surgery stayed more than 100 degrees cooler than a non-treated blade, thereby reducing bone tissue damage by half.

The RF85 treatment of Anderson’s AM15 rifles sets them apart from other ARs in that it allows the weapon to operate efficiently without traditional “wet” lubricant. In a coefficient friction test performed by Oak Ridge National Laboratory, the reduction of friction on all steel surfaces was reduced by 85 percent. According to Oak Ridge, the RF85-treated weapon cycles 23-percent faster and more reliably than a non-RF85-treated weapon with traditional wet lubricant. The RF85 guns operate at cooler temperatures and experience significantly less wear, all without traditional wet lubricant. RF85-treated rifles don’t experience failures due to excess dirt and carbon fouling in the action either. “There are several advantages associated with friction reduction in general, two of those being heat reduction and increased component life,” according to the Oak Ridge Testing Report.

Another huge advantage offered by the RF85 treatment is incredibly easy cleanup and dramatically reduced carbon fouling. Just soap and water remove 90 percent of the powder residue, with the remainder of the fouling removed with a small bristle brush.

“I can’t imagine why anyone would put oil on a combat rifle, with this new technology,” Steffner said. “We’re going to be fighting in the sand for the rest of my life, and there’s nothing to gum up. All you need is a bottle of water to clean it up. You can’t see it and can’t smell it.”

Unlike some other firearms manufacturers, Anderson Manufacturing makes every part for their AM-15 firearm in-house, with the exception of a few screws and selected accessories. Anderson builds the AM-15 Sniper model, and the rest of the lineup, in its Hebron, Kentucky factory. This model is a flat-top optics-ready model with upper and lower receivers CNC machined from a high-strength, 7075 T6 aluminum forging for reliable performance and durability. Machined to Military Specifications & Standards and marked “Multi-Cal ” to be used with multiple calibers on the AR-15 platform, this receiver set comes in Type III black hard anodize.

The barrel is a 24-inch heavy 416R stainless steel fluted 5.56mm NATO chambered tube with a 0.936 low profile gas block set at the carbine position. The barrel’s twist rate is 1:8. The muzzle is threaded ½-28 TPI and tipped with an A2 flash hider.

The AM-15 bolt carrier group features a phosphate coating and chrome lining. The carrier utilizes 8620 steel, and the bolt comes from 9310 steel that’s MPI tested.

Upgrades include an Ergo pistol grip with a palm shelf. Meanwhile, a Magpul PRS butt stock provides length of pull and comb height adjustment. Anderson utilizes its own free-float extended 15-inch handguard with a Picatinny rail at the 12-o’clock position. A single-stage Timney fire control group comes set from the factory with a 3-pound trigger pull. An added feature is a Harris LMS bipod.

This writer got a chance to run this rifle in below-freezing conditions while in Idaho in October. I put five 30-round magazines through the rifle without any hiccups. Selling for $1,716, this long-range rig delivered fist-sized groups on steel at 500 yards. It also made hits out to 800 yards with some wind corrections. This is a solid rifle with reliable accuracy potential.