Build a Tiny Beast with this AR pistol build.

If I told you that you could have an AR pistol that would fold up and fit inside of a small lunchbox or the seatback of your vehicle, would it pique your interest? It’s not only possible, but you can build one yourself, with this AR pistol build. To sweeten the deal, with practice you could go from a two-piece AR to being ready to rock and roll in about 10 seconds or less. This is only made possible by using the QRB (Quick Release Barrel) system from Cry Havoc Tactical. 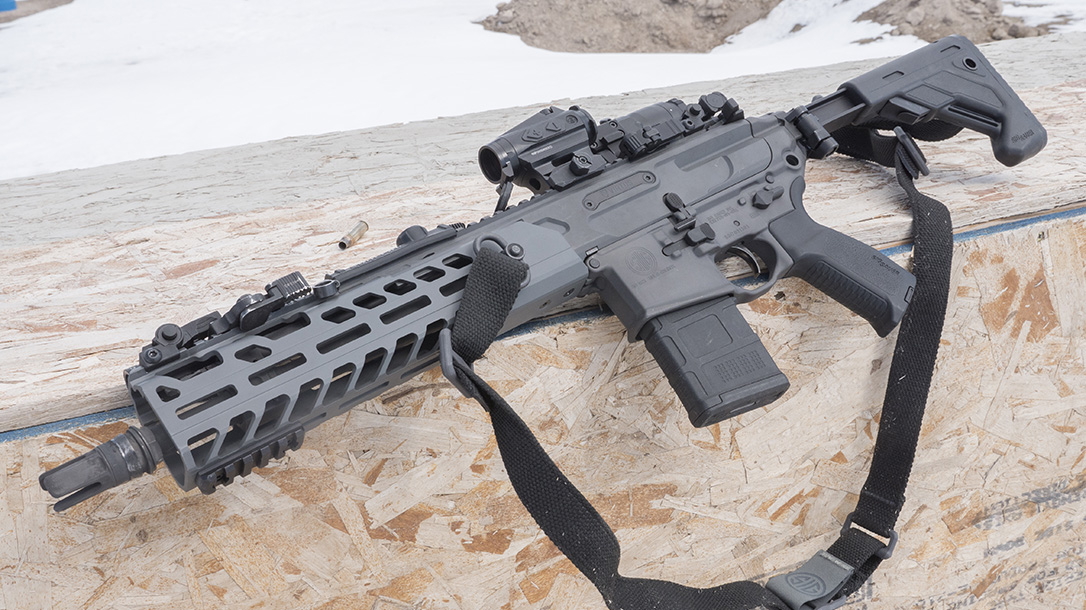 Are AR Pistols or SBRs Better for Your Shooting Needs?

The U.S. Air Force got with Cry Havoc Tactical and then made what is now called the GAU-5A ACSW (Air Crew Survival Weapon). This system was built upon to fit neatly and compactly inside of the ejection seats of select USAF fighter jets. After reading up about the GAU-5A ACSW, I decided to build my own version of this cool little peashooter.

The Quick Release Barrel system from Cry Havoc Tactical is an ingenious design. It all began when Mike Selvetti, an engineer by trade, had an idea. He found a way to attach and detach the handguard and barrel of an AR without the need for tools. Thus, Cry Havoc Tactical was born.

Then came the idea that this design would work great for downed USAF fighter pilots who need a weapon in a pinch. Jim Lane (current owner) became a partner in 2017, and eventually purchased the patent and company from Selvetti. Jim’s an engineer and military veteran, and has informed me that he used to do some really cool stuff. That includes designing and helping to field “things” that have sat on the desk of U.S. presidents. And now we know why the U.S. military chose to go with the Cry Havoc Tactical QRB system to give our downed pilots a fighting edge.

Next came a virtual trip online over to primaryarms.com. No this is not a shameless plug; I’ve actually been a customer of theirs since 2008. PA has everything needed to build the GAU-5A with the exception of the QRB system itself. A quick call over to Jim Lane at Cry Havoc Tactical will remedy that. But for everything else AR related, Primary Arms had me pretty much covered.

I honestly thought that sourcing this build was going to be an absolute train wreck, given the political climate around the 2020 presidential “elections.” I was, however, very impressed by how fast PA got more parts in, and I had a budget to stick to. The only parts that weren’t available from them was the Aero Precision “Thunder Ranch” special edition lower and FAB Defense folding AR pistol grip.

At a time when lower receivers were scarce, I stumbled upon this TR lower at 3 Aces LLC in Spokane, Washington. Their main employee (Aaron Smith) is a buddy of mine and was kind enough to sell me the one he was planning on taking home. It didn’t even take any “persuasion” from the owner, who also happens to be his boss. Poor guy can’t escape his wife, even at work…. I’m kidding, but Aaron helped assemble the QRB system for me, and that is some serious customer service.

Fair warning, if you plan to build one of these, you are going to need a specific type of handguard. Any handguards that have anti-rotation tabs won’t work. However, if you are really attached to that one handguard, you will have to grind off the tab(s) in order for it to mate up properly. Hey, that gives you an excuse to paint it anyway, right?

The barrel nut end of the handguard has to be completely flat in order to mate up properly with the QRB system. I chose the Foxtrot Mike 8.5-inch Ultra-Light Free Float M-LOK handguard. It’s a Primary Arms exclusive and was the best option after consulting with Lane over at Cry Havoc. Overall, it was a great choice. The Foxtrot Mike handguard is 6061 T-6 aluminum, loaded with M-LOK attachment points and weighs only 5 ounces.

When I was looking for receiver sets, I saw the “Thunder Ranch” special edition lower receiver from Aero Precision and couldn’t resist. Clint Smith (Owner of Thunder Ranch) had Aero Precision cut out a section of the magwell on both sides. It makes clearing the chamber of stuck rounds that much easier. If Clint says it works, I’ll take his word for it. The man is a straight up legend in the shooting community.

Build Your Own Lower

As far as building your own AR lower receiver, the options are endless. I used a basic Aero Precision LPK for this, as it didn’t cost much. Only the basics were needed here anyway, as I was piecing this together. So, to whomever packed this order, ask for a raise, you deserve it… I’ve grown fond of using Strike Industries Ultra-Light AR pivot and take down pins, and have used them in my last few builds. Battle Arms Development gets my business when it comes to ambi-safeties and an extended mag release. The only change on this build from previous ones is the 90-degree short-throw safety levers.

One of the most crucial components of the AR is the trigger. I’ve become a huge fan of Rise Armament over my last several builds. Their single stage drop-in triggers are easy to install and rock solid. The Blitz, though, is probably my favorite of the RA lineup. It’s long been a personal rule of mine that all triggers in my defensive weapons have no less than a 4- to 4.5-pound trigger pull. That just goes back to my Army and LE days, and what was beaten into my hard head. The RA Blitz comes in at 3.5 pounds according to my Wheeler Trigger Pull Scale. One would never guess it’s that light. I’ll make an exception for this one, as it’s just a clean pull, then “snap,” followed by a very short reset.

The pistol grip is from Fab Defense and is very interesting to be fair. It does its job, and it’s comfortable…if you’re right-handed. For a Southpaw it’s horrible, so Fab Defense, please relocate, or recess, that screw. It does allow for the AR to be that much more compact, though, if that’s what you’re after.

To make this package even more compact, a Law Tactical folding brace adapter was chosen. These things have more than proven themselves in some of the beat downs I’ve dished out during testing and evaluations. It makes storage that much simpler. SB Tactical still makes the best AR Pistol brace available, so that was a no-brainer there. Just toss it in the virtual shopping cart with the rest of the list. Here’s a worthy note for those building your own AR’s: Do yourself a favor and order up a Primary Weapons Systems Ratchet Lock Castle Nut and Endplate Set. You get a swivel socket end plate and a castle nut that never needs staking. It just makes things that much easier.

To help ensure accuracy, a Ballistic Advantage Modern Series 5.56 Barrel 10.5-inch Gov. Profile barrel (1-in-7 twist) was used. To make things simpler, I tossed in a Ballistic Advantage bolt carrier that I found in my parts bin. If you’ve never used a Ballistic Advantage barrel, do yourself a solid and check them out. To cap it off, an Epsilon VG6 was used. It worked great taming what little recoil this poodle shooter had, and is a true break, compensator and flash hider combo. When it comes to BUIS, Magpul is still the industry standard, so on they went.

There are various schools of thought regarding what optics to run on AR pistols. I wanted the K.I.S.S. method (keep it simple stupid) that I learned the hard way many times growing up. The GAU-5A ACSW doesn’t have an optic, which is a shame. Compact being the name of the game here, I opted for an actual pistol optic. Holosun released their brand new HS507C-X2 pistol red-dot sight, but get this: They upgraded and added the ACSS Vulcan Reticle. It comes with Holosun’s legendary “shake awake” function, which is my favorite in a red-dot. You literally leave the optic on, and it will shut itself off. When it senses any kind of movement, it turns it on for you, so it’s ready when you are.

The HS507C-X2 also has a side battery drawer, boasts an impressive 50K-hour lifespan and is night vision compatible. This optic is where it’s at, and I’ll be ordering another one for my Walther PDP 4-inch Compact as well. Only one catch: This optic is available exclusively through Primary Arms. And while you’re there, pick up an ADM RMR mount for it and you’re in business. Those things are like a little vice on a Pic rail.

If I was going to be strapped to an ejection seat, I’d want this build with me. Cry Havoc’s motto is “Success Measured in MOA.” This system is insanely portable. With practice, you can reinstall the QRB system in less than 10 seconds. Seriously, it’s that simple.

As far as accuracy is concerned, results don’t lie. Since this is an AR Pistol, I chose 25 yards to be the sweet spot. The ACSS Vulcan Reticle inside this Holosun HS-507C-X2 is very impressive and makes accuracy come that much easier.

Federal Premium Gold Metal Berger .223 Rem. 73-grain BT Open Tip Match took top shot this time with a 0.3-inch grouping at 25 yards. But that just wasn’t enough for me, so I took it out to 100 yards to test Cry Havoc’s Motto. Their success truly is measured in MOA, because I used that same ammo and netted a 0.9-inch group at 100 yards. I’d remove and reattach the QRB system to the upper receiver, and it never shifted my accuracy a bit. This AR pistol is dead on accurate.

Cry Havoc Tactical Has All Your AR Pistol Build Needs

If you are looking for a compact, yet highly accurate AR, you might want consider checking out Cry Havoc Tactical. The owner told me that this system is downright wicked in a 6-inch .300 Blackout version.

It’s fair to mention that he also offers options that enable you to buy this very kit (5.56), while also having a separate upper (barrel nut forward) in .300 Blackout. If you really wanted to get fancy, you could SBR it, have a short version in .308, then pop off that QRB system and install a 20-inch 6.5 Creedmoor, all within seconds. You’d get up close and personal, paired with an exceptionally reliable long-distance service provider. Win/win!

If it’s an AR platform, your possibilities are pretty much endless with the Quick Release Barrel System from Cry Havoc Tactical. If you build one, and the theme from Transformers gets stuck in your head…you’re welcome.

This article was originally published in the Tactical Life Aug/Sept 2021 issue. Subscription is available in print and digital editions at OutdoorGroupStore.com. Or call 1-800-284-5668, or email subscriptions@athlonmediagroup.com.