Are AR Pistols or SBRs Better for Your Shooting Needs?

I’ve been a fan and strong advocate for short-barreled rifles (SBRs) for a long time, especially in 5.56mm NATO. 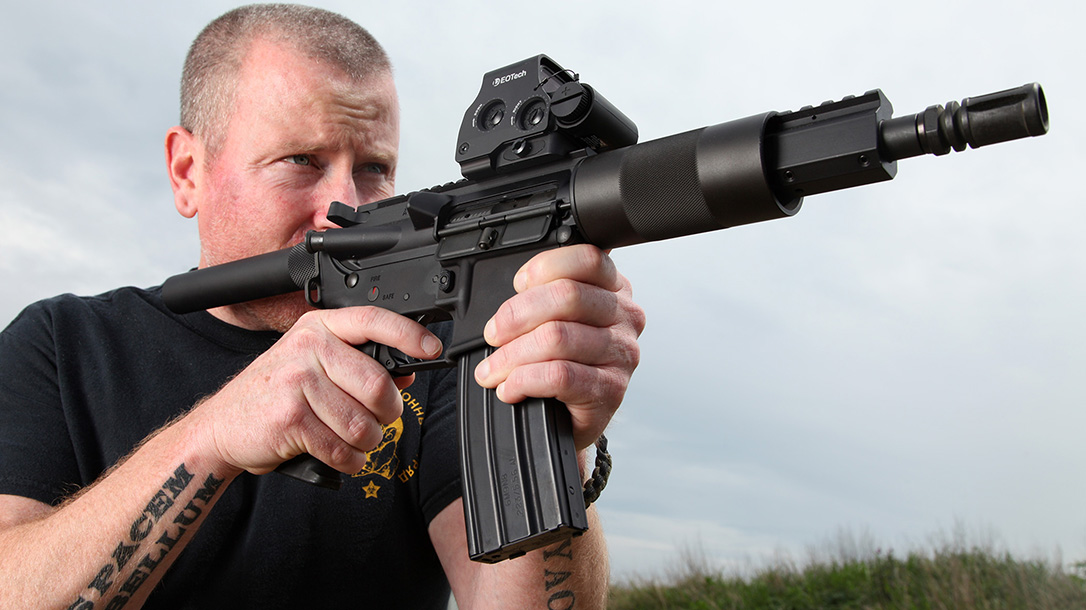 For realistic applications, a 16-inch barrel is about 6 inches too long for me. I served as a law enforcement officer for decades, and the most practical 5.56mm carbines seem to have barrels between 10.5 to 11.5 inches long. Modern ammunition keeps these weapons ballistically efficient yet short enough to be handy in close spaces, and they can still be reliably suppressed.

I’ve used SBRs to consistently engage targets out to 500 yards. In other words, they meet the needs of all but the most specialized tasks. Shorter barrels (7 to 9 inches) can be useful for dedicated law enforcement entry work as well as home and vehicle defense. Advancements in bullet and ammunition technology have made SBRs excellent options when your targets are inside 100 yards, but you can still stretch your shots to 300 yards if needed. SBRs also fit in small bags, drawers, carriers on motorcycles—all kinds of places a typical rifle just won’t fit while still bringing rifle-caliber ballistics to close-quarters environments.

Assuming your state allows SBRs, the only problem has been the annoying paperwork and $200 tax stamp to register one with the BATFE. This process can take up to a year. But all that changed with the advent of the AR pistol, the stabilizing brace and the BATFE’s latest rulings on their use.

Initially, AR pistols weren’t that big of a deal. I was a strong critic when they originally came out for the simple reason that they seemed mostly useless. Most were ARs with a shorter buffer tube and no stock. Other platforms like the AK and Galil simply never had a stock installed. Using a sling and a long-standing technique developed for weapons like the Uzi and HK MP5, you could shoot reasonably well, but it required lots of practice. From a practical standpoint, they were mostly toys—noisemakers you whacked cans and debris with at the range while firing from the hip. Most used very short barrels and were loud, blast intensive and not particularly accurate or reliable. In order to use them properly, you needed a stock, and that required a tax stamp.

But the introduction of stabilizing braces, and the BATFE’s willingness to approve their use on AR pistols, changed the game. So long as the gun was manufactured as a pistol, adding a stabilizing brace did not turn you into a felon. And these braces are designed to assist in one-handed shooting by attaching the gun to your forearm. Do they make these large-format pistols more useful? Not really—they’re mostly better range toys—unless you can only shoot with one hand.

Initially, the BATFE released an open letter saying that shouldering a brace turned your pistol into an SBR and thus you into a felon, dampening interest. Nonetheless, the industry kept designing better braces, including the Gear Head Works Tailhook and the Shockwave blade. Others made similar improvements, making such pistols even more useful. Then the BATFE reversed its original decision, stating that you could in fact shoulder a pistol stabilizing brace.

Any discussion about these firearms requires a bit of a disclaimer. Having studied the BATFE’s latest open letter from March 21, 2017, in detail, my interpretation is simple: So long as you don’t alter the brace from its factory configuration, it doesn’t matter how you use it. This seems pretty logical. Driving your Prius on a race track does not turn it into a racecar, or you into a racecar driver. Therefore, you can shoulder the brace all you want—just don’t alter it or install it on a rifle. It must be used on a pistol. I had three separate lawyers look at this, one specializing in gun law, and they all agreed.

But the letter from the BATFE was technically addressed to Sig Sauer for its SB15 pistol stabilizing brace. So, some interpret that as meaning it only applies to that specific brace, warning against shouldering other models. Some writers still refuse to shoulder braces in videos, and most manufacturers won’t illustrate using one that way, as they’re afraid they may be “aiding and abetting” someone using it improperly. So, you’ll need to come to your own conclusions.

AR Pistols vs. SBRs: Anything Can Happen

All said and done, it’s important to remember that, just like the last letter, this one can be always be reinterpreted or changed. It just depends on who’s running the BATFE at the moment. My guess is nothing will change under the Trump administration and a Republican-controlled Congress, but this is why your vote is so important as a gun owner.

State laws also govern the possession of these pistols. Many allow a pistol where a loaded rifle would otherwise be prohibited. Many states’ laws, for example, allow their citizens to keep loaded pistols concealed in vehicles but prohibit rifles in such roles. These pistols aren’t really practical for concealed carry on your person, but it’s never a bad idea to have one within reach, especially if you can’t keep an SBR there. Some states prohibit AR-platform rifles completely, even forbidding SBRs, but pistols are fair game. Like the BATFE’s opinions, state laws may change as these guns continue to gain popularity.

Some of the newest braces available include the Gear Head Works Tailhook Mod 2 and the SB Tactical SBA3. Both are adjustable for length of pull—a fantastic improvement over original braces. They work better if you have short or long arms, and any inadvertent or purposeful shouldering yields much better results. Shockwave blades are still popular, too. I recently attended a carbine class with my Primary Weapons Systems (PWS) MK111 SBR, and three other attendees used the same platform but in pistol form with Shockwave braces. They were just as effective as me, and I couldn’t see any differences in terms of practicality.

Equipped with a folding brace, an AR pistol provides an excellent home-defense weapon—especially in 300 Blackout—that can be accessed easily when needed and used by anyone in the family. You can also do without the one-year wait, tax stamp and paperwork required for registering an SBR with the BATFE. It’s just a pistol. If you can legally possess a firearm, you can own one.

Of course, there are still some reasons to deal with the hassle and go the SBR route, although, admittedly, that is becoming more and more difficult. Maybe the most important aspect here is that SBRs have been proven legally for some time. SBRs are clearly articulated in the National Firearms Act (NFA). Changing that would require a change to the law, ostensibly an act of Congress and a willing president. Changing bureau directors, attorney generals or even presidents won’t alter your SBR’s legal status. Anything can change these days, but no matter how skeptical you are, it is much more difficult to alter the NFA than any letter issued by someone at the BATFE.

AR Pistols vs. SBRs: Other Considerations

Versatility is the biggest practical advantage of an SBR. You can install any stock on the market, not just a stabilizing brace—short, long, DMR, skeletonized, you name it. You can also alter the firearm once you have it registered. Want to change buffer tubes? Sure, no problem. No matter what you do, it’s still an SBR. So you can swap out components and change things around as needed. On the other hand, many see any alteration of an AR pistol as a risky proposition since you are physically and practically altering its basic configuration—still a no-no even after the last BATFE letter. 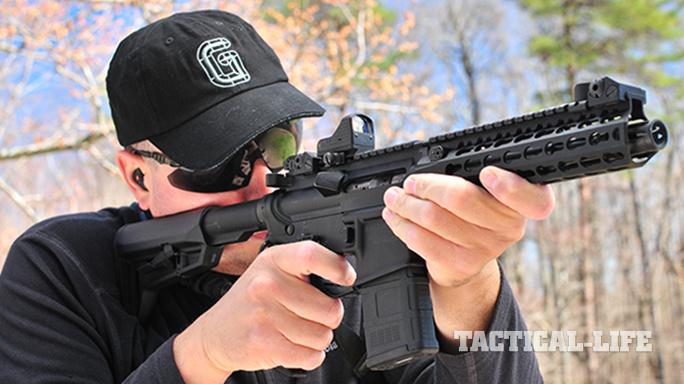 Get Shorty: Building a Compact SBR for Close Quarters

There is no arguing the practicality and usability of today’s AR pistols and similarly built firearms. They’re compact, powerful and perfectly suited to most anything an SBR was previously required for. Every year, these pistols get better and better—more reliable, more accurate and easier to use. Of course, they’re still loud, hard to suppress in rifle calibers and can be hard to control. Stabilizing braces might help for the latter, but the laws of physics still apply.

Current laws make these pistols the only game if you travel and don’t want to deal with notifying the BATFE every time you want to take your SBR. The latest stabilizing braces make SBRs all but obsolete for most people. In fact, I keep one of these AR pistols near me most of the time—a job my SBRs previously held. It’s increasingly difficult to see why you would go through the hassle to register an SBR. So long as this latest BATFE letter holds, and nothing else changes, it’s almost a no-brainer for all but the most specialized applications.

I end with one caveat. Just remember that politics and society in general are volatile these days, making nothing permanent, so all this could change on a dime. Buyer beware. And yet, these large-format pistols might just be the best thing going for home and vehicle defense.