4
SHARES
82
VIEWS
Share on FacebookShare on Twitter
If you love World War II history, you have Auto-Ordnance Corporation to thank for making the iconic Thompson submachine-gun (semi-auto), M1 Carbine, and M1911A1 pistol in their standard, GI issue form. If you love art, you should know that they also offer 10 different custom, military themed commemorative models of those old battle veterans. The commemoratives are heavily laser engraved on both wood and metal and uniquely finished to enhance the artwork. This year Auto Ordnance adds three new custom models — an M1A1-style Thompson, M1 Carbine, and M1911A1 pistol — to commemorate the epic and bloody 37-day battle of Iwo Jima on its 75th anniversary. The Auto Ordnance Iwo Jima Series honors all the Marines, sailors and seabees who fought there. 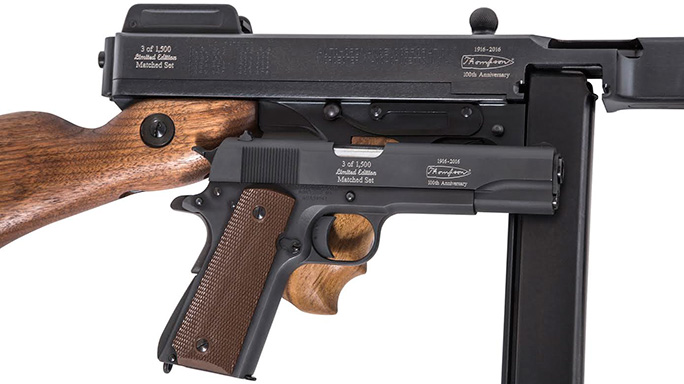 Outlaw Ordnance custom engraved these fully functional guns. They share some common design elements in the art. All metal parts received a coating with durable olive drab green Cerakote. Meanwhile, a distressed copper wash patina looks reminiscent of the color of the combat uniforms worn by the USMC. It even matches the naval artillery shell casings of the period.

While each of the guns has its own unique artistic features, all are engraved with “IWO JIMA,” the dates of the battle (“FEB 19-MAR 26 1945”), its codename (“OPERATION DETACHMENT,”) imagery of the second (and more famous) flag raising on Mount Suribachi as photographed by Joe Rosenthal, and the legendary and eloquent quote from then Chief of Naval Operations, and America’s highest ranking Naval officer, Fleet Admiral Chester A. Nimitz.

The admiral said, “Among the men who fought on Iwo Jima, uncommon valor was a common virtue.”

If any one event could be pointed to and credited with making the reputation of the USMC forever more, it was Iwo Jima. The ferocity of the battle was beyond all expectations and marked a turning point in Japanese defensive strategy.

At Iwo Jima, the Japanese ground troops didn’t try to fight off the American landing on the beaches as they had on previous islands. This time they planned to conserve their strength by protecting themselves from overwhelming American naval and airpower and making the Americans pay a bloody price for every foot of ground they took. Knowing the upcoming battle already lost, the Japanese determined to sell their lives dearly.

For months before the invasion, they mined from the volcanic rock, hundreds of concealed, and often interconnected defensive positions, which included eleven miles of tunnels. They turned Iwo Jima’s eight square miles into an invisible fortress, virtually impervious to naval and air bombardment. In these positions, the 21,000 Japanese defenders waited as the Marines landed on an empty and strangely quiet beachhead. Hell awaited them.

For the Japanese, it was a fight to the death. In fact, by the time it was over, more than 19,000 of the defenders were dead. American casualties exceeded 26,000, with approximately 6,800 killed.

I recently got range time with the three guns at the 2019 Athlon Outdoors Rendezvous in Idaho. It’s easy to think they’re just display guns, meant to be show pieces, but they’re not. All three actually shot incredibly well in my limited range time, proving they’re as fun to shoot as they are beautiful.

Auto-Ordnance recreated imagery of the close combat in the engraving on the right side of the Iwo Jima Thompson buttstock. It’s based on an actual photograph from the battle of a standing Marine firing his Tommy gun at the enemy. Meanwhile his comrade, armed with an M1 rifle, advances at a crouch ahead of him.

All the Iwo Jima guns bear their own unique images of Marines, sailors and seabees. The engraving on the carbine stock includes a the face of Admiral Raymond A. Spruance, commander of the Fifth Fleet, who lead the campaigns that captured Iwo Jima. For more information on these unique and beautiful commemoratives, please visit auto-ordnance.com.