As a kid I used to pull the pics of guns out of magazines and tack them up on my bedroom wall to admire and dream about owning someday. I am a lot older now, but I think I am going to find a pic of the Barrett MRAD Mk22, stick it on my wall, and dream about it the same way. Recently, I got to spend a few hours shooting, admiring, discussing, and generally drooling all over the Mark 22 Mod 0 at the Athlon Outdoors Rendezvous in Driggs, Idaho. I felt like a cave man talking to a NASA engineer and then getting to take a spin on a rocket ship. 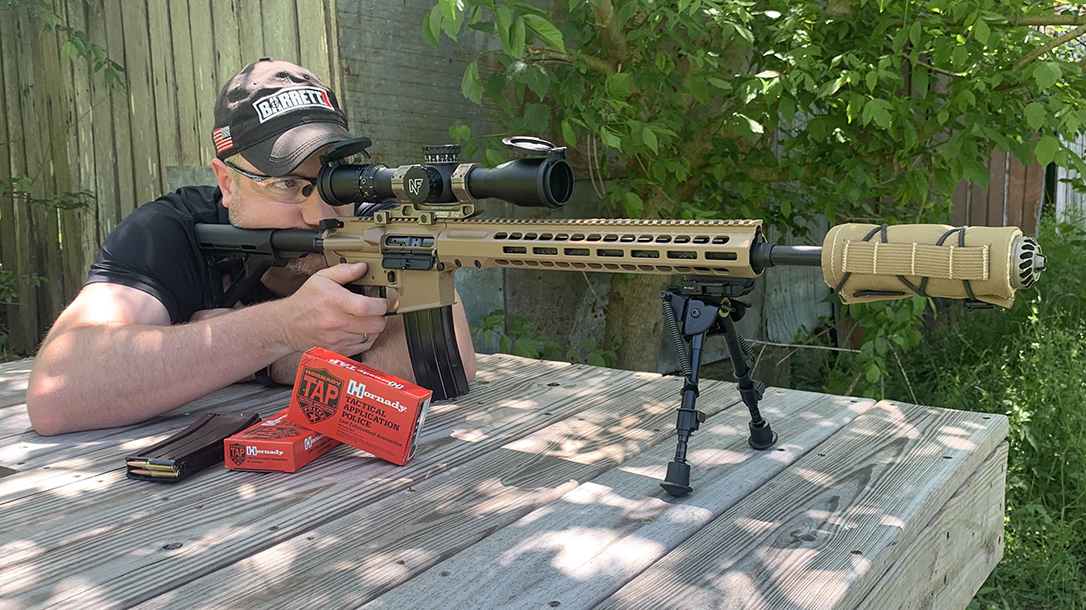 Everything you need comes in the package Pelican case, and the barrels and components can easily be swapped by the user in the field. Barrett is currently offering the same system for civilian purchase through Europtic.  The rifle package without suppressor or optic is $16K. You don’t have to run out and enlist to field one of these hard use beauties.

It isn’t often that you can say a 500-yard shot is an easy warm-up and 1,000 yards feels mundane. The Barrett team has forgotten more about long-range shooting than most of us will ever know. I have seen them walk novice shooters out past 1,000 yards in a matter of minutes. I love shooting when they spot for me because it feels effortless. A 15-mile-per-hour tailwind kept shifting and gusting up to 25 while I was behind the gun. Even so, I was making hits out to 1,800 yards like it was my day job. The bolt ran smooth and easy. The safety and mag release proved intuitive, and the trigger broke as crisply as any custom gun.

For most of us, the Barrett name means large caliber, precision riflery. We know it is the gun that our toughest special forces depend on under the world’s worst conditions. The price tag for such an adaptable, bomb-proof, weapon system puts it beyond the reach of most of us, we all know it’s easily worth every penny.

The design, construction and testing that went into MRAD, and then the Mk 22, go far beyond what most of us need for hunting or competition. However, when American lives are on the line, we need to field the very best. After talking to the guys at Barrett, learning about the features, and shooting the Mk 22, I know it is the very best. For more information go to barrett.net.