To fully understand how far we’ve come with the Battle Rifle Company BR4, you’ve got to look back. 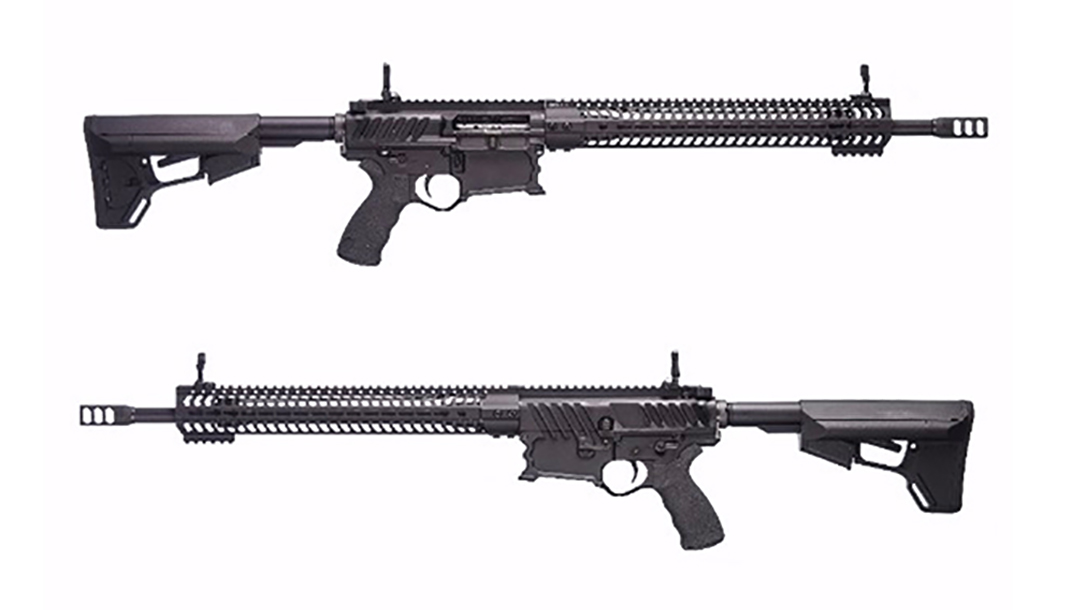 About two generations ago, it wasn’t surprising to see a law enforcement agency’s personnel wearing a mishmash of equipment—including handguns—usually purchased with their own money. With everything from single-action revolvers to .44-40 lever guns on up to today’s firearms, it can be tricky to teach officers such different manuals of arms. Thankfully, law enforcement agencies have mostly standardized their equipment today, which makes the job of training different officers much easier.

Nowadays, the equipment decisions are being made, or strongly influenced, by trainers who usually have more than a modicum of interest in equipment. The result is usually excellent, well-thought-out equipment. So it is reasonable these days for anyone to ask, “If it’s good enough for a cop, shouldn’t it be a good choice for me?”

The ubiquitous AR-15 is a good example of a product that, for advice on buying the best model, folks would be wise to seek the advice of experienced law enforcement trainers and other real experts. There are hundreds of options in the AR world ranging from high-end custom rifles to those cobbled together from a random collection of parts. Of course, there are companies that buy only the best parts and spend the time and effort to assemble excellent ARs.

Battle Rifle Company (BRC) is one of the these companies, as it obtains only the best parts that meet its specifications to create AR-platform rifles with tight tolerances for the best downrange performance without compromising reliability. Chris Kurzadkowski, the owner of BRC, said that his company maintains such high quality standards by having every gunsmith’s work reviewed by another gunsmith. Then he himself inspects every rifle before it leaves the factory.

Based out of Houston, Texas, BRC has been in business since April of 2010. The company manufactures a variety of ARs that seem to have impressed a lot of people across the country, civilians and law enforcement personnel alike. In fact, a number of law enforcement agencies inside and outside of Texas have adopted BRC’s ARs. The most popular model chosen for officers is the BR4 Trooper.

This seems logical because, as BRC describes it, the Battle Rifle Company BR4 Trooper is a “basic entry-level rifle with full mil-spec features and some added things that bring extra value at an affordable price.” BRC also has a “Build to Spec” program. Simply put, rather than buying something off the shelf and just making do, or having an officer or armorer modify the weapons to create what is required, BRC will build an agency rifles ready to go straight from the box.

I spoke with one of those aforementioned expert firearms trainers, Sgt. Daniel Haugen of the Bossier City, Louisiana, Police Department (BCPD), to discuss how his agency’s procurement of 50 BR4 Trooper rifles came about. Bossier City isn’t far from the border between Louisiana and Texas with a police department of over 185 officers.

According to Haugen, while he and his chief were attending a conference, a BRC representative invited them to visit their facility and see how their ARs were made and performed. Of course, opening your facility for someone like this is an indication of confidence in your company’s procedures and products. And it worked. When the purchasing process for new carbines began, Haugen took BRC up on its invitation. He devoted four days to the task, including quite a bit of time at a range with a “trunk full” of samples of every BRC offering. Haugen shot a ton of rounds through all of the samples without failure, leaving him feeling confident in BRC’s reputation for reliability and its rifles’ ability to protect the lives of his officers and their community.

Fifty BR4 Troopers designated for patrol and traffic officers were purchased and then customized with Haugen’s specification. Those modifications were quite logical for true defensive rifles.

Even a quick glance should reveal BRC’s BR4 Troopers are well-made AR-pattern carbines. The standard BR4 Trooper in 5.56mm NATO comes with either a 14.5- or 16-inch, cryogenically treated, chrome-lined barrel with a black manganese-phosphate finish, a 1-in-7-inch twist rate and M4 feed ramps. The 16-inch barrels come with removable A2-style flash suppressors while the shorter barrels have fixed flash suppressors.

The standard BR4 Trooper also comes with a mil-spec buffer tube and a carbine-length gas system, though mid-length systems are available. Other mil-spec items include the detachable carry handle rear sight, “F”-marked front sight, polymer handguard, front sling swivel, bayonet mount, brass deflector, dust cover and forward assist. The pistol grip, collapsible stock and trigger are all mil-spec, though BRC can improve the trigger in several ways. The matched upper and lower receivers themselves are also made of mil-spec 7075-T6 aluminum, and inside you’ll find a properly staked M16 bolt carrier group with a magnetic-particle (MP) inspected Carpenter 158 bolt.

Haugen wanted his agency’s carbines to wear co-witnessed Vortex SPARC red-dot sights and 500-lumen Streamlight ProTac 2L flashlights. Of course, they’d need some rail space for that, so the polymer handguards were replaced with free-floating, carbine-length handguards with full-length top rails and short rail segments on the sides and bottom with dished out spaces for the support hand.

Finally, each rifle came in a nice soft-sided bag with three Hexmags and a two-point Magpul MS3 sling.

The carbine I received for testing was similar to the BR4 Troopers built for the BCPD. It had a few enhancements of its own, including an enlarged triggerguard, an ALG Defense Advanced Combat Trigger (ACT), a Hogue pistol grip and a BRC Disintegrator flash suppressor. The rifle also came with one C-Products magazine.

On the firing line, the customized BR4 Trooper provided no surprises. Its first-rate fit and finish and excellent assembly helped turn in some great groups. The ACT trigger broke smoothly at 4.2 pounds, and all of the controls worked smoothly. The rifle handled well; it was light and quick when transitioning between targets set up for a CQB scenario—what you’d expect traffic and patrol officers to be exposed to most often. The rifle also ran flawlessly with all of the test ammo.

Next, I moved to the 100-yard line for more work and installed a Leupold 4.5-14X scope. The customized BR4 Trooper seemed to like a variety of bullet weights, as it ran well with all of them. Its accuracy was great, with all of my test groups hovering right around an inch. Hornady’s 60 V-MAX rounds created the best group at 0.93 inches.

Those tests completed, I retrieved the ACO and sent some more rounds downrange from the bench. I fired at 25 to 100 yards, with the latter being an extreme for most law enforcement engagements. With the ACO, the BR4 Trooper delivered just what was needed out to 75 yards. At 100 yards, my aging eyes just couldn’t cut it. I could still keep all of my shots near the center of the target. I couldn’t get more precise than that. (Thankfully, cops and warfighters are usually younger!)

I really liked the entire setup of the Battle Rifle Company BR4 Trooper that I tested. I especially enjoyed its ALG trigger, upgraded handguard and Hogue furniture. However, removing all of those customizations, I suspect a standard BR4 Trooper would still be pretty impressive.

At the end of my visit with Sgt. Haugen, I asked him if was he still pleased with the BR4 Trooper for his department. He replied with a resounding “Yes!” Need more proof? The BCPD has already purchased another 50 BR4 Trooper models. Twelve will be chambered in 300 Blackout and 16 in 9mm. The agency also has plans to obtain more 5.56mm NATO models soon. The 9mm and 300 Blackout guns will be issued to Special Operations.

Battle Rifle Company has a wide spectrum of products in all shapes and sizes to suit any need. Just look at the BR4 Trident and Cutlass, which BRC designed specifically for maritime security, or MARSEC. On top of that, BRC seems pretty amenable to providing exactly what the purchaser wants. The company does so with quality work. I’m sure you won’t be disappointed. For more information, visit battleriflecompany.com.