The Overlooked Reason Why Bolt Guns Will Always Be Relevant

by Aaron Barruga
in Guns, Rifles
0

The tighter tolerances of bolt guns allow for more accurate fire to be delivered, but this is only part of the reason why bolt guns will always be relevant to modern military operations.

In June, a Canadian Special Forces sniper set a new record by killing an ISIL fighter from a distance of about 2.2 miles. The shot was taken using a McMillan TAC-50, bolt action rifle. To the precision shooting community, the weapon of choice is not a surprise. The tighter tolerances of bolt guns allow for more accurate fire to be delivered. But this is only part of the reason why bolt guns will always be relevant to modern military operations. 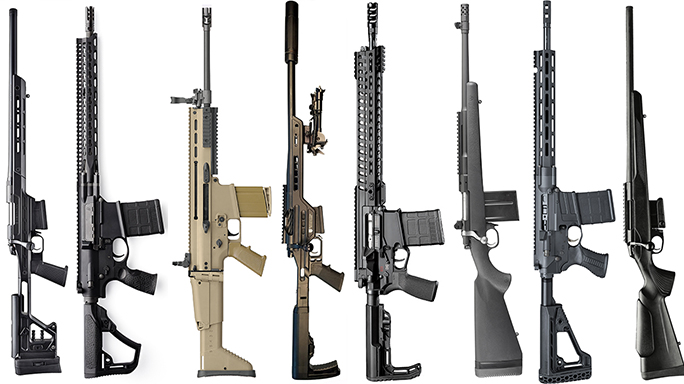 Law enforcement officers and soldiers that are not in sniper duty positions spend most of their time on the range between the 5- and 50-yard lines. Most of the world lives in urban environments. As a result, lethal encounters tend to happen within close quarter distances. Despite this reality, precision grouping exercises at midrange or even just 50 yards offer tremendous benefit to the development of capable marksmen.

Shooters learn a lot about trigger control and shot discipline when they are forced to group consistently at 200 yards. Regardless of using magnified optics or iron sights, the forced patience learned by grouping at distance is different than marksmanship taught for CQB-style “runnin and gunnin.” In fact, it can be easy for marksmen more focused on speed at the 7-yard line to develop a false sense of ability. Allowed to rush makeup shots, this sacrifices effective shot placement in favor of speed.

I became painfully aware of this reality going through Special Forces Sniper School (SFSS). During the first few weeks of the course, we focused primarily on performance grouping from iron sights. We used the military’s workhorse of a bolt-gun: The M24 Remington 700. Although this might seem practical, it confused some students. It was 2007, and most snipers in Iraq and Afghanistan were using semi-automatic 7.62 platforms. This is because the speed of engagements and the pace of tactical operations demanded immediate follow-up shots. Furthermore, if we were going to use bolt guns, why weren’t we at least using rifles chambered in .300 or .338?

The sniper’s fieldcraft is an important part of his skillset. Understanding the heritage of the title adjusts a sniper candidate’s mindset. This goes for everything — your behavior in the field, how you change your posture as as singleton, equipment selection, and also your training approach. The reason we spent weeks grouping from iron sights on arguably outdated weapons systems was to teach us fire discipline.

Unless a shooter has been properly trained with a semi-automatic weapon, he will rush his shots during a midrange grouping exercise. Although the shooter might enter into the drill with the understanding that he is not shooting for speed, shooters can become frustrated if they pull a shot. With a carbine, we tend to immediately chase a bad shot by sending what may potentially be another bad shot. This has happened to everyone at some point and it takes discipline to force ourselves to reset our mental state.

Compared to CQB-style “runnin and gunnin,” performance grouping at midrange never wins the most cool points or makes the best Instagram videos. The discipline learned to land a first round hit is invaluable.

Years after graduating from Special Forces Sniper School, I deployed to Afghanistan. Distances of our engagements stretched out to 600 yards (unless we were ambushed in close quarters). At that distance, bullets average about 0.5 seconds of travel time. Although that seems immediate, the crack of a missed round instinctively forces even the most novice fighter to the ground and out of your sights. In these types of engagements, it becomes impractical to rely on the availability of a makeup shot.

As weapons continue to advance, a new soldier will eventually break the current longest kill shot record of 2.2 miles. Regardless, precision shooting at distance will echo back to the fire discipline stressed by Scottish gamekeepers of the early 1900s, the sharpshooters of Vietnam, and the current generation of GWOT soldiers.

Although new technologies will allow for in-flight bullet corrections and optics that automatically calculate holdovers, until a soldier doesn’t need to physically squeeze a trigger, a clean press learned from fire discipline on bolt guns will always be important.

Aaron Barruga is Special Forces veteran with deployments to Iraq, Afghanistan, and the Pacific Theater of Operations. He has trained foreign commandos, police officers, and militia fighters. He is the founder at Guerrilla Approach LLC, where he consults law enforcement officers on counter-terrorism and vehicle tactics.