Patterned after the Russian M44, the Chinese Type 53 features a distinctive folding bayonet and a 7.62x54R chambering.

The Chinese Type 53 Rifle has a unique history. A license-built version of the Soviet M1944 Mosin-Nagant carbine for the People’s Liberation Army (PLA), it only saw Chinese service for a few years as it had already been superseded by the SKS and AK-47 when it was introduced. By the time it entered service in 1953, the Korean War was over so it probably saw little, if any, combat with the PLA, though some Type 44 carbines supplied by the Soviets were used. Then, by the early 1960s, it was being replaced by either the Chinese Type 56 version of the SKS or the Type 56 version of the AK-47. 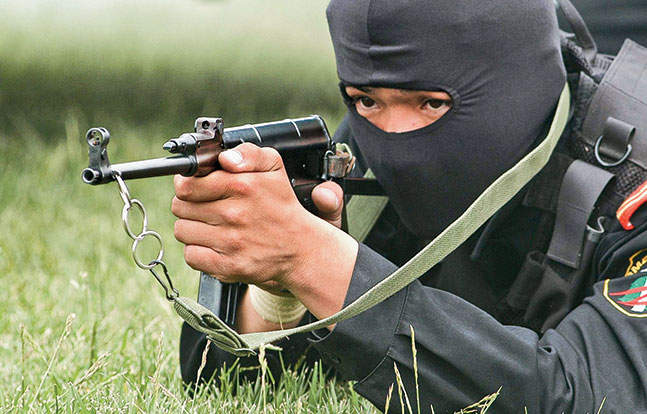 For the next 20 years, the Type 53 was used to arm the Chinese People’s Militia. It was eventually replaced in 1982. It was in the hands of Chinese surrogates, especially the North Vietnamese Army (NVA) or Viet Cong, that the Type 53 saw most of its combat. Type 53s have turned up in the hands of other insurgents as well, especially in Africa and Latin America.

Because of the “human wave” tactics used by the Chinese in Korea, which were part of their infantry doctrine, the integral cruciform bayonet of the M1944 was considered a great advantage for the Type 53. Reportedly, Soviet machinery was sent to China to build the Type 53. Production of the Type 53, along with the production of weapons with tooling captured from the Nationalist Chinese, was the beginning of today’s powerful Chinese arms industry.

As is often the case with Chinese-produced weapons, there are some questions about the Type 53. For example, I have never seen a figure for how many were produced. There is also some discussion among collectors and arms historians about when production ceased. The years 1960 or 1961 are sometimes cited as the last years during which Type 53s were produced. Captured rifles from Vietnam are known that were produced in 1961, but it is possible that some rifles were produced after that year. Initially, Type 53 rifles were marked in Chinese characters that indicated its designation as “53 Year Type” and production at the “State Factory at Chongqing,” but later rifles lack these markings. Whether these were removed in an attempt to hide the origin of rifles for guerrilla groups or for another reason is not known.

The Soviet Model 1944 Carbine, upon which the Type 53 is based, was itself based on the earlier Mosin-Nagant Model 1938 Carbine. They are very similar except that the Model 1944 incorporates a folding bayonet. Hinged so that it could be unfolded and locked into position, this bayonet offered an excellent compromise that allowed overall length of the carbine to be kept down while still having a bayonet instantly available. Just pulling the bayonet slightly unlocks it and allows it to be folded into position.

Another interesting aspect of the Model 1944 is the hole in the top of the sight’s hood. This hole was retained on later Soviet rifles and allowed for the use of an AK-47 tool to adjust the elevation of the front sight. On the Model 1944 and the Type 53, the hole allows light to reach the front post. In addition to the Chinese Type 53, M44 Carbines were also produced in Poland, Hungary and Romania. M44s were provided by the Soviets to other allied states, including East Germany. There are also some M44s that were captured by the Finns during the Continuation War and issued. There is enough variation in the M44 that some collectors specialize just in the variations of this carbine.

The Model 1944, as well as the Type 53, must be viewed in the historical context of the Mosin-Nagant rifle. I have seen the Mosin-Nagant called the longest serving and most widely used bolt-action rifle of all time; I can see no evidence to dispute this claim. The Mosin-Nagant entered service in 1891 and is still being used in conflicts, such as the Syrian Civil War, today. At least 37 million were produced just in Russia and the Soviet Union, not to mention more elsewhere. The basic Mosin-Nagant design proved reliable and durable and was carried over into later models such as the Type 53. Type 53s have turned up recently in use by groups in the former Yugoslavia and by the Shining Path in Peru, among others.

Among the characteristics of the typical Mosin-Nagant were the straight bolt handle and the safety. It was engaged by pulling the cocking piece to the rear and rotating it to the left. This allowed it to hook over the rear of the receiver. Unlike the Mauser, which was the standard by which most rifles were judged at the turn of the 20th century, the Mosin-Nagant had a somewhat complex bolt design as compared to the Masuer. The Mosin-Nagant’s recessed bolt uses a spring-loaded extractor that snaps over the cartridge head as the bolt closes. Once again this differed from the Mauser-type, in which the cartridge head slides under the extractor as a cartridge is fed from the magazine.

Another noteworthy aspect of the Mosin-Nagant’s bolt is that the bolt handle must be turned 90 degrees to open or close it, as is the case with the Mauser. The Lee-Enfield, on the other hand, only required turning the bolt 60 degrees to operate, thus speeding up the reload.

One interesting aspect of the earliest Mosin-Nagant sights was that they were graduated in “arshins” (paces) and were equal to about 0.7 meters. Later sights were graduated in meters when the Red Army started producing the Model 1891/30 version of the Mosin-Nagant. The hooded front sight was added to this version as well. This rifle was produced through the end of World War II, with a total production of almost 17.5 million.

In 1938, a carbine version, the Model 1938, which did not take a bayonet, was introduced. This carbine had proven so much handier and more popular with troops that, in 1944, the M1944 Carbine, upon which the Type 53 was based, entered service.

Another distinctive feature of Mosin-Nagant rifles present in the Type 53 is the use of slots in the stock, rather than sling swivels, for sling attachment. This eases manufacture but also is useful tactically as it eliminates the sound a sling swivel can make when the soldier is moving. The folding bayonet locks in place well and does not rattle, either. The Type 53 does well on a jump test.

Differences between the Type 53 and the Model 1944 upon which it was based are very minor and include a cleaning rod that was 0.5 inches shorter than on the Type 53 and that also screwed in differently. Type 53s generally had stocks produced of a Chinese wood called “chu” that fared well in humid jungle climates. This stock was finished with a heavy varnish or shellac. This wood was also used on Chinese AK-47s.

Century Arms has imported a group of Type 53 carbines that are available as I write this. [Editor’s Note: Century Arms is no longer importing these rifles.] Most show quite a bit of use and Century is not stating from whence they came, but the couple I’ve examined seem to be solid and in good working order.

Among the noteworthy shooting characteristics of the Type 53 is its muzzle heaviness due to the folding bayonet, which gives it a tendency to drop off target if held off-hand for too long. Another noticeable impairment to good shooting is the small U-shaped rear sight notch. The typical Mosin-Nagant safety, which is difficult to apply or remove quickly, would be better left off in combat as it is almost faster to operate the bolt to chamber a round than to remove the safety, though operating the safety is quieter. Its operation would get surer with use; I would imagine a lot of troops in combat carried the Type 53 with a round chambered and the safety off, an invitation to negligent discharges. 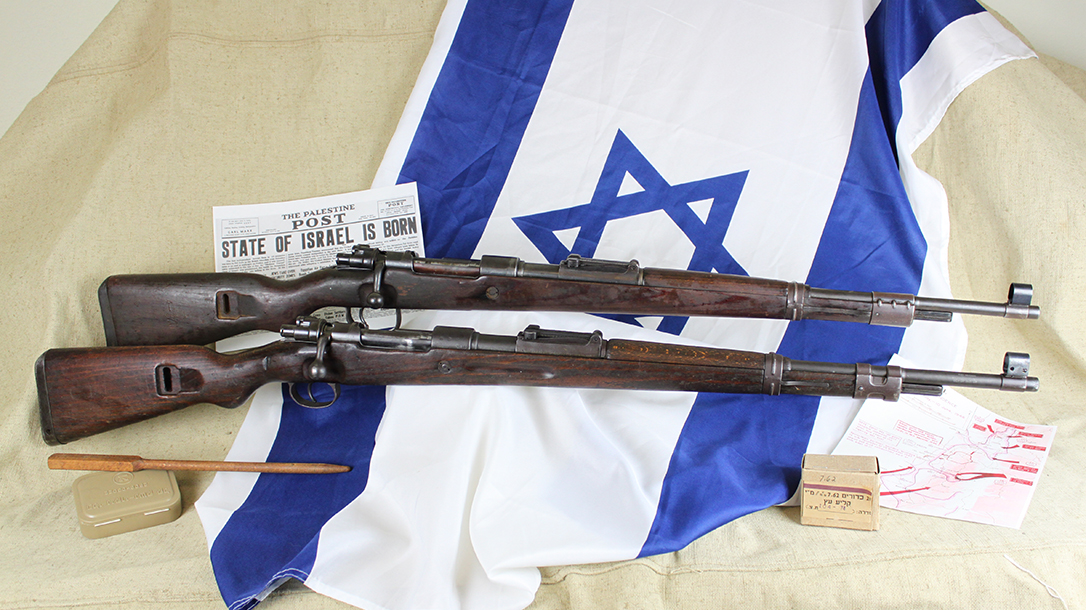 Having trained quite a few Third World troops over the years, I’ve seen many rifles carried set on full auto with the safety off; carrying the Type 53 with the safety off and a round ready to go would not be a great surprise to me. I just always tried not to walk point!

One pleasant surprise I’ve found with the Type 53 is that recoil with its 7.62x54R round is not as onerous as I might have expected and seems to come straight back. I certainly wouldn’t rate recoil as any more noticeable than that of one of my 1903 Springfields. I should note, however, that Type 53 recoil seems to be more noticeable than that of the Model 91/30, and I wouldn’t want to shoot too many rounds off of a bench. Speaking of shooting the Type 53, corrosive ammunition is relatively inexpensive; I would recommend some of the Wolf or other non-corrosive ammunition. On a positive note, even though the Century Arms Type 53 Carbines show a lot of use, the bolts operate very smoothly. Type 53s have been somewhat difficult to find for a while, so those at Century offer some collector appeal.

This article allowed me to get reacquainted with the Type 53. I’ve had it next to my desk while writing. I’ve also handled it dozens of times to remind me of its features. I’ve always found Mosin-Nagants among the more interesting bolt-action military rifles; the Model 1944 and Type 53 Carbines have always been among my favorites. I think I find the Type 53 especially interesting as a reminder of the sometimes tenuous relations between the People’s Republic of China and the Soviet Union as well as the weapons supplied to Communist insurgents in various proxy wars.

Think about it: China wanted to produce its own military rifle, but the Soviets supplied them with older technology. As a result, the Chinese began producing what was already an obsolescent design in 1953. After only a few years, they replaced it with the Type 56 Rifle and Type 56 Carbine. The Type 53, then, became available to supply insurgents in Southeast Asia and around the world. It is still supplying some insurgents today.

This article was originally published in “Military Surplus.” To order a copy of that magazine, visit outdoorgroupstore.com.