The M249S Para is its latest addition to FN’s Military Collector series, which includes two AR-15s as close as you can get to the M4 and M16, and three semi-auto versions of the M249 squad automatic weapon (SAW). Chambered in 5.56mm NATO, the M249S is made as closely as possible to FN’s military version, but without the automatic-fire capability. The “S” in its model name designates that it is semi-auto only. The Para version is distinguished by its collapsible stock and 16.1-inch barrel, instead of the standard 20-inch barrel. 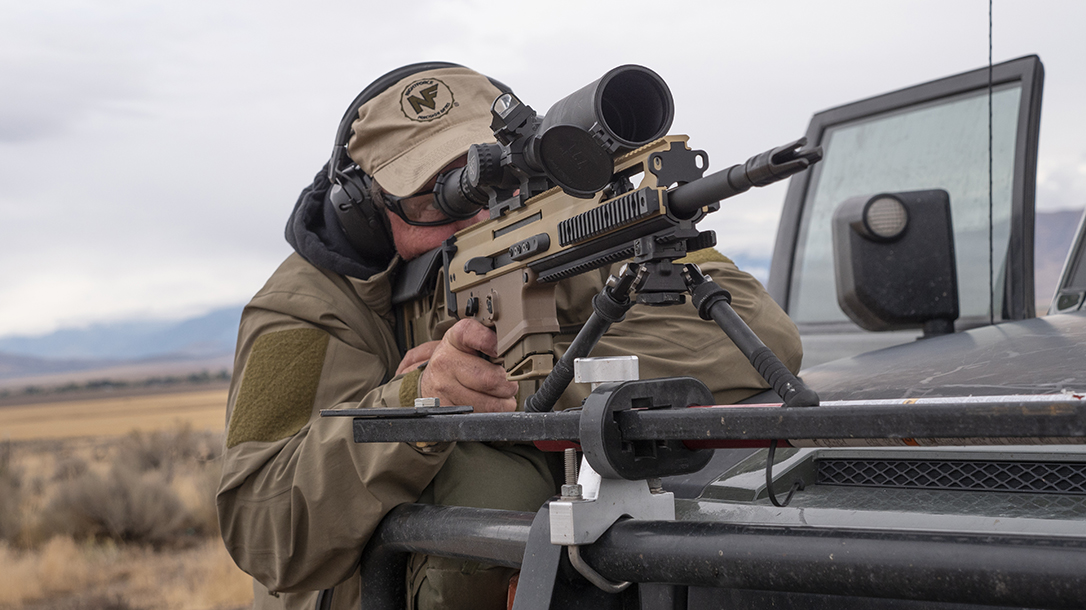 The M249S traces its lineage to the Minimi light machine gun developed by FN in Belgium and first unveiled in 1974. After testing by the U.S. Army, it was officially adopted in 1982 from a list of four candidates and fielded in 1984. The M249 first saw action in the 1989 invasion of Panama. It has been used in every significant American ground force deployment since.

Despite its age, the M249 has only undergone a few changes. The gas system went from being adjustable to fixed. A Picatinny-style rail was added to the top cover to accommodate optics. Several buttstocks have also been used. The two most recent martial variants include the M249 Para and MK 46 MOD 1. The latter uses a shorter barrel, a fixed stock and a quad-rail forend.

While the M249 fires from an open bolt and is capable of automatic fire only, the semi-automatic M249S fires from a closed bolt to satisfy the BATFE’s threshold requirement that semi-autos not be “readily convertible” to full-auto fire, which is how the agency classifies any open-bolt, magazine-fed firearm. Both the semi- and full-auto versions feature gas operation. Each use a long-stroke piston design with a rotating, three-lug bolt that locks into the barrel extension. (“Long-stroke” means the gas piston moves rearward with the operating rod at least the length of the cartridge—examples include the Garand, AK-47 and M1A. “Short-stroke” gas systems use pistons that move shorter distances, as with most piston-driven AR-15s and the M1 Carbine.)

The M249S is fed with either belt ammunition or NATO STANAG (i.e., M16) magazines in “emergencies,” according to the official U.S. Army manual. Belted ammo uses steel M27 links that are fed onto the feed tray from the left. The magazine well is also located on the left, just under the tray. Belted ammo is stored in a container that mounts below the receiver. The M249S comes with 200 links, one aluminum magazine and a black plastic box that holds up to 200 rounds and attaches under the rifle.

Dimensionally, the M249S Para weighs 16 pounds unloaded—just over the weight of two AR-15s—and is 31.5 to 37 inches long depending on the stock position. It uses an integral steel bipod that folds up and stows inside the forend. The bipod’s legs are adjustable for firing on uneven terrain. But it does not have the capability to pan left to right. The weapon also comes with eyelets for slinging it over the shoulder and two sockets for mounting onto a tripod or a pintle for deployment from a vehicle, though the larger and more potent M240 in 7.62mm NATO is typically used in that role.

The M249S Para also uses a quick-change barrel. The rifling has a 1-in-7-inch twist rate, and the flash suppressor/compensator is pinned and welded to the muzzle of a slightly longer M249 Para barrel to make it the legal length of 16.1 inches. Quick-change barrels are a necessity for belt-fed machine guns because they maintain the weapon’s accuracy and allow for continuous firing over long periods. Each military M249 is issued with two barrels. According to U.S. Army manuals, a barrel should be changed after firing 200 rounds or more per minute in two minutes, 850 rounds in one minute or 500 rounds in 10 minutes.

To change the barrel on the M249S, retract and maintain the bolt group rearward by hand or by inserting the supplied plastic block that FN calls the “Manual Bolt Lock Device” into the mag well, then depress the lever on the trunnion and pull the barrel forward. The cold-hammer-forged barrel is made by FN and has a chrome-lined bore, which FN has determined preserves the rifling from wearing out better than nitriding.

Operating the M249S is so distinctive from typical magazine-fed rifles that FN decided to produce a comprehensive instructional video covering every aspect of this rifle, from belt linking to disassembly and cleaning. Watch this video completely, even if you are proficient in operating the full-auto M249, because the semi-auto version incorporates new parts (for example, a sliding hammer) that require different techniques for effective operation.

Most buyers of the M249S will want to know how it differs from the “real-deal” weapon they see on TV in the hands of U.S. forces fighting in conflict zones across the globe. The two weapons differ substantially in construction and operation.

The M249S and the M249 use the same stamped-steel, heat-treated receivers with two chrome-plated rails welded to the inside upon which the bolt group rides. Both versions are finished using the same process, but the semi-auto version is held to a higher cosmetic standard. Though the receivers of the M249 and M249S are dimensionally the same on the outside, the internal builds differ. For instance, two additional rails are attached to the bottom of the semi-auto’s receiver to guide the slide hammer assembly forward and rearward, and preclude the installation of the full-auto bolt group, and a narrower bracket on the rear of the receiver prevents a full-auto trigger assembly from being installed. FN’s engineers also had to design a new trigger mechanism and slightly modify the bolt, bolt carrier, firing pin, firing pin spring and piston rod assembly.

There are also operational differences. The semi-auto version fires from a closed and locked bolt. So it can fire only when the bolt is fully forward and locked into the barrel extension. Depressing the trigger releases the slide hammer, which moves straight forward under spring tension to strike the firing pin. After firing, the bolt unlocks and moves rearward along with the slide and piston assembly. The slide hammer moves rearward to its cocked position and is held by the disconnector in the trigger group. Releasing the trigger connects the cocked slide hammer to the trigger sear.

In contrast, the full-auto M249 is ready to fire when the bolt group is retained fully rearward by the trigger. (This is intended to provide barrel cooling between firing bursts and prevent “cook-offs” of rounds chambered in a super-hot barrel.) Depressing the trigger allows the bolt, slide and piston assemblies to move forward. The bolt strips a cartridge from the belt and channels it downward from the feed tray into the chamber. After the round is chambered, the bolt is cammed rightward by the forward-moving slide until it locks into the barrel extension. The slide and piston assembly continue to move forward, pushing the firing pin through the bolt face to strike the primer.

We at Tactical Life typically test rifles for accuracy at 100 yards. However, given the obvious purpose of the M249S as a collectible and extravagant plinker for those with about $8,600 to spare, I focused on assessing its reliability using Federal American Eagle 55-grain FMJs, Federal 62-grain XM855 “Green Tip” rounds and a 55-grain FMJ reload from U.S. Cartridge Company.

All three loads ran at 93- to 100-percent reliability when feeding from the linked belt, the supplied magazine, a Magpul PMAG GEN M2and an LMT magazine. Be mindful to keep the plastic box containing the linked ammo from flexing or damage to ensure the gun feeds properly. A bit of lubricant on the plastic feed lip on the side that contacts the steel links might also help.

When firing the FN M249S, the most stable technique is to shoot from a prone position with the buttplate hook atop the firing shoulder and the support hand pressing downward and rearward on the buttstock. It’s hardly a novel method, having been used by soldiers since at least World War II, but it also works quite well in semi-auto fire.

Though optics have been standard issue for years, the M249S Para comes with a fairly sophisticated and well-made, fully adjustable rear sight with ranging calibrations out to 1,000 meters. The front sight is a protected post. Casual firing from a prone position at 50 yards using the bipod and the iron sights easily yielded five-shot groups of 2.5 to 3 inches. Adding an optic would obviously shrink groups, as would firing the rifle while it was rested on a solid support.

This platform has endured for so many decades in part because of its. The M249S features a wide, smooth, curved trigger shoe, while the large crossbolt safety provides activation via the thumb. The trigger has a bit of creep, but its travel is smooth, not gritty, with a 6-pound pull. The plastic 200-round box, however, makes the rifle awkward to carry afield. Nylon bags are a better choice for the field. Finally, the telescoping Para stock proved sturdy and without wobble when locked in the firing position.

Civilian-legal imitations of military arms are immensely popular, but their authenticity is often lacking because, besides the necessary change to semi-auto fire, most use parts that wouldn’t be accepted under the military’s rigorous quality-control standards. FN manufactures both the military and civilian versions of the M249 on the same assembly line. Many of the same parts undergo the same quality-control process, according to FN. So, for those who want an authentic semi-auto version of the M249 SAW, the FN M249S is as true to form as you can get.